WOW, very nice.. What are the screen temps?

Can i send him a new laptop? lol
G

I'm guessing either the inverter or the CCFLs died. Both of those are really cheap fixes parts wise. The hardest part is replacing CCFLs because getting those LCD panels apart is a pain in the ass.

That looks like a Lenovo/IBM Thinkpad, you could also get the full screen assembly for usually less than $40 if you didn't want to DIY.

pliskin679 said:
Can i send him a new laptop? lol
Click to expand...

You can send me a new laptop
D

So I wanted a tech station and figured let's make something quickly, but how? It's ok I found a good starting base
http://s23.postimg.org/mwhtc3vln/Tech_Station_01.jpg
http://s11.postimg.org/403qaync3/Tech_Station_02.jpg
http://s15.postimg.org/l5iiu614r/Ghetto_Case_09.jpg
There will be more improvements once I get more time with the saw. By the way is it me or have I noticed less dust and better overall temps compared to standard case (I did run Antec1200 before, that was fan-tastic)

By request, here's my makeshift sit/stand desk. Used some loose shelves from my closet on top of my monitor boxes. Free, easy, functional, ergonomic, and ugly. 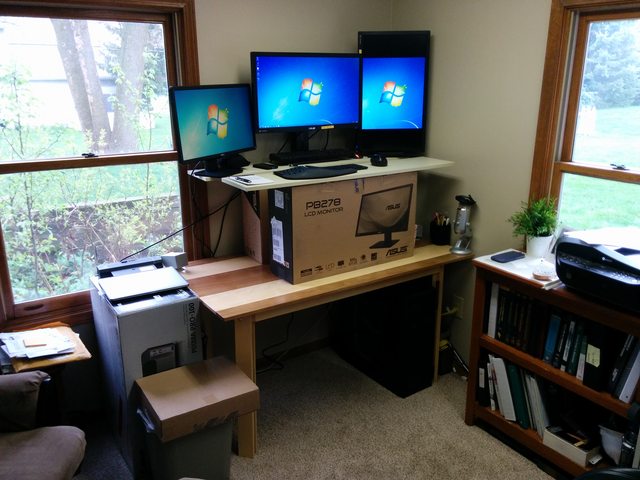 What a bunch of cheap skates. Does the guy need to add some milk crates and duct tape to get some love around here.
J

I did clean it up for the pic. There's usually a USB game pad, an all in one USB card reader, and my blue yeti USB cable (that's obnoxiously 8ft long) all hanging out the front of my case. Then there's the junk mail everywhere andy notes from working there all day.

Surprised nobody saw my DP cable stretched tight from the laptop to the far monitor.

Some of these are absolutely disgusting. I love it.
D

Forgot I had an MOT (inspection) coming and I still haven't wired the horn. I was eye balling that Asus case sitting there doing nothing and some arcade switches that never end up being used. Few hours later the ghetto was real! Living it up....

Needed a stand for an old touch screen from a stand alone Kodak picture kiosk. Some wood and screws later this is what I came up with.

Too much wood, needs more cardboard and tape. Points for old kb and what looks like outlet w/no faceplate attached.
S

Got a new computer case this week, but since the HDD light is on the very top of the case, I cannot see it from where I sit at my desk, A while back, I was in the process of throwing out an old computer case, I snipped out some of the wiring in the hopes that they might be useful some day, and indeed that day has come.

I used an led light from an old RF modulator and the snipped header wire from that very old case. some stripping and electrical tape later, plugged it in and it worked right the first time, a victory for me since I dont know much about wires and wiring. The light isnt too bright, so I will eather go look for something more brighter or just buy a power panel wiring thingy from newegg that includes power/reset buttons and leds and just do some modding of that just to get the led part working.

if anyone wants to help me finding a led light strip way of doing this, or cold cathode, that would look nice i bet.
M

I don't really do "ghetto", but this lighting controller was made without spending any money:

The microcontroller, the LED strips and some other small parts were new, but they were all left over from previous projects, so the total cost = 0.

And the end result:

It's ok, I don't need foodstamps! My cat brings me enough mice and birds to survive on. For some reason an occasional potato too.
R

This is like rolling through the hood in a Bentley when everyone else has a 93 Pontiac on 4 spare donuts...

You could have wrapped some of the wiring in electrical tape or twist ties, mentioning it looks a little sparky. This is what this thread is all about.
T

Works! No more overheating of I/C!
Click to expand...

YES! Someone else saving their epic Samsung! 305T?

Mine was not just overheating, the chipset BGA soldering failed. Fixed it with the heat gun a few times over the years but that stopped working for more than a few min at a time. I needed to put a great deal of pressure on the chip... Here's my solution: 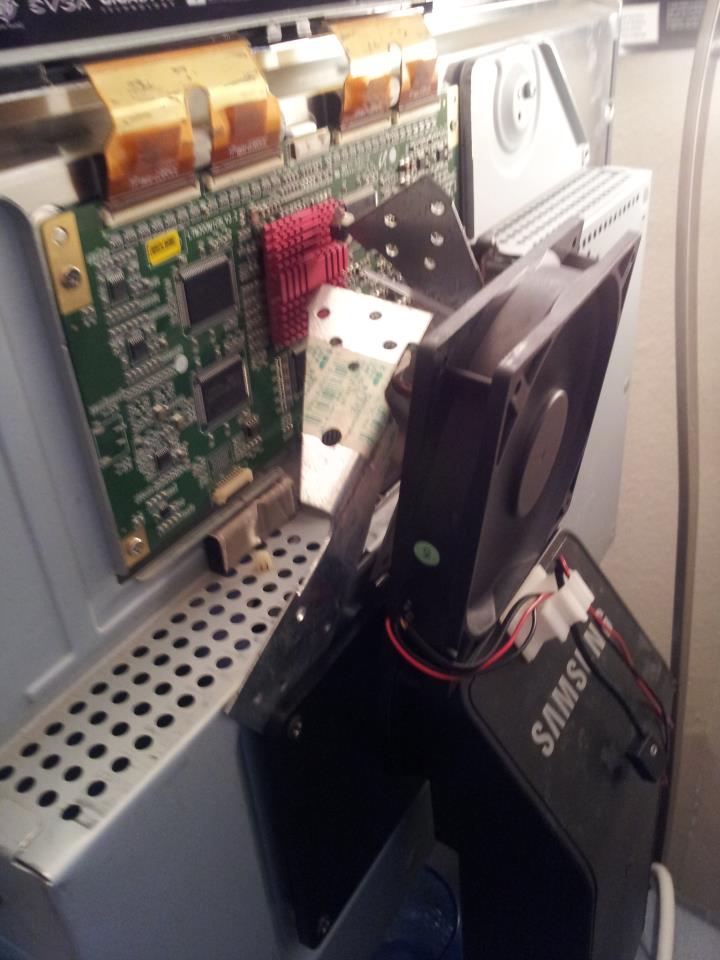 ryang said:
Too much wood, needs more cardboard and tape. Points for old kb and what looks like outlet w/no faceplate attached.
Click to expand...

Yeah, shit gets real when someone who's actually poor shows up. haha

Mr Evil said:
I don't really do "ghetto", but this lighting controller was made without spending any money:

The microcontroller, the LED strips and some other small parts were new, but they were all left over from previous projects, so the total cost = 0.

Get out of here with that bullshit.
D

This isn't ghetto per-se, but I figure this is worthy of posting in here instead of the 2015 rig thread for the reason that it's pretty much comprised of old parts. I threw this together with some slight chopping of the original case up on the PSU shelf and some drilled holes for the wonderful mess-o-wires box. the original internals were dead-- power supply blew up and took the board with it. Aside from a blue power LED replacing the burnt-out one and a green power LED from elsewhere as the disk activity LED, it's almost stock-looking... until you look at the stuff up front in the optical bays and the back with the modern ports and PSU.

I did all the cutting with a sawzall and an 18 TPI blade as it's what I had, and the drilling with an age-old black and decker corded drill. I had to also sawzall out the PSU hole in the back to properly fit either this PSU or an older red-cased Enermax 480W PSU I have sitting new in box. there's electrical tape keeping the 3 front fans plugged directly into a molex connector hiding behind the drive cage.

Speccy is in the image if you want to see idle temps for everything inside with ambient room temp at about 23-25C because half-finished basement. the CPU doesn't go anywhere above 60C.
Sorry for no duct tape, I do have some covering a fray point on a 90W dell adapter I use with an E6400 and Latitude X300, but can't currently take a picture. I did also use some when I was cutting out the PSU shelf, as a layer of protection for anything that might accidentally get hit by the long blade I had.

and YES, that IS superglue holding the 6970's shroud on. it broke off during shipping from a friend in Wisconsin who wrapped it so tenderly in paper towel alongside another one (and a 6950). they were originally part of a dogecoin mining rig a couple years back so he had no problem with sending them off as they were taking up space.
Last edited: Feb 7, 2016
C

Hah! I love it. Please post more pics when you change out any parts.

colinstu said:
Hah! I love it. Please post more pics when you change out any parts.
Click to expand...

I wonder if it'll get me any extra food stamps if I say that the heatsink on the X-Fi's SoC is a US Quarter?
H

Sudos said:
I wonder if it'll get me any extra food stamps if I say that the heatsink on the X-Fi's SoC is a US Quarter?
Click to expand...

that clearly shows you have Income and won't qualify for any further food stamps..

I might have to do the same thing with a monitor of mine...I swear the lcd screen is fine but the power connection is just failing and Id hate to just throw away a perfectly good screen haha
A


Old PSU was burning caps, so spliced on a full ATX PSU. 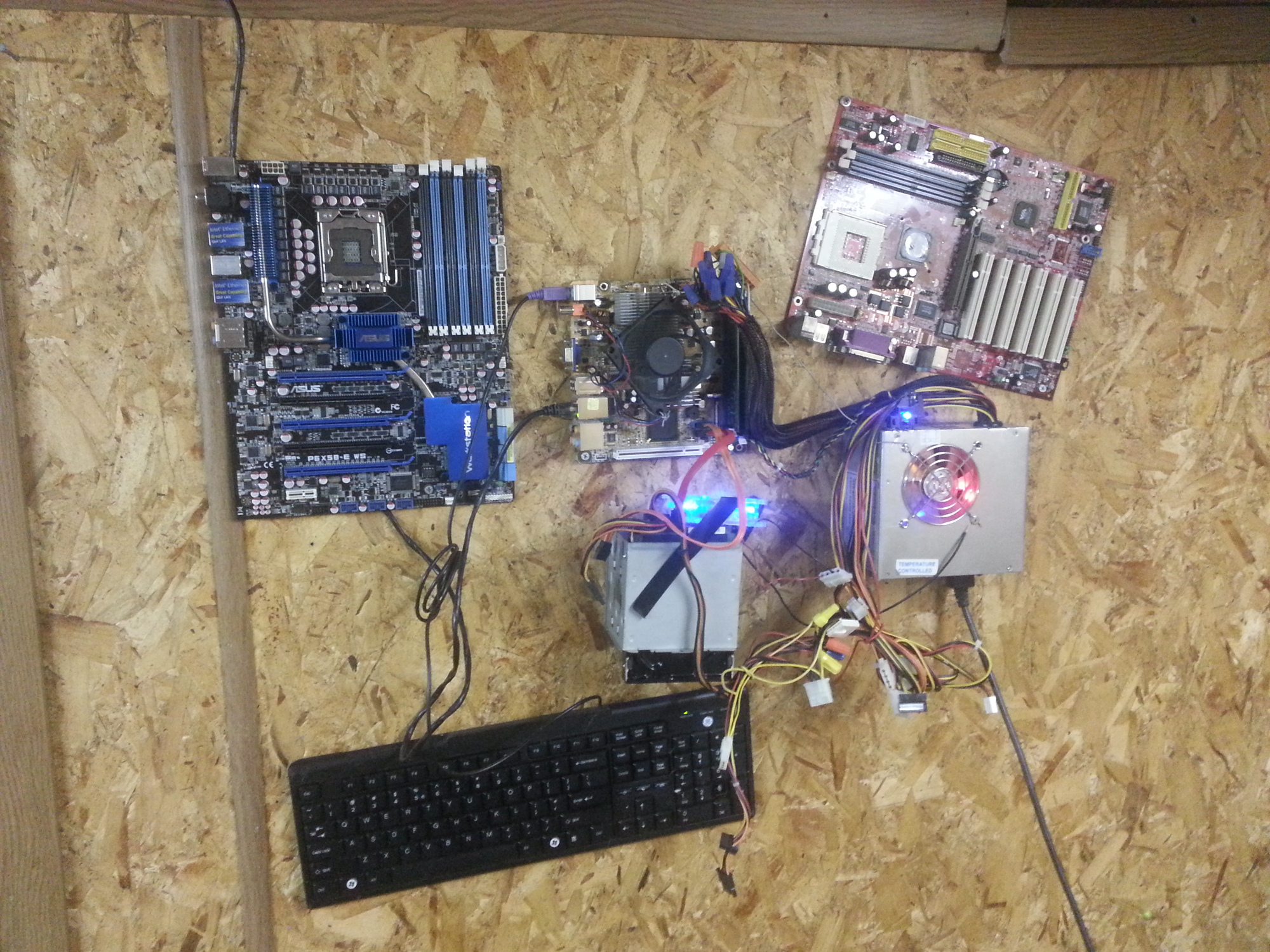 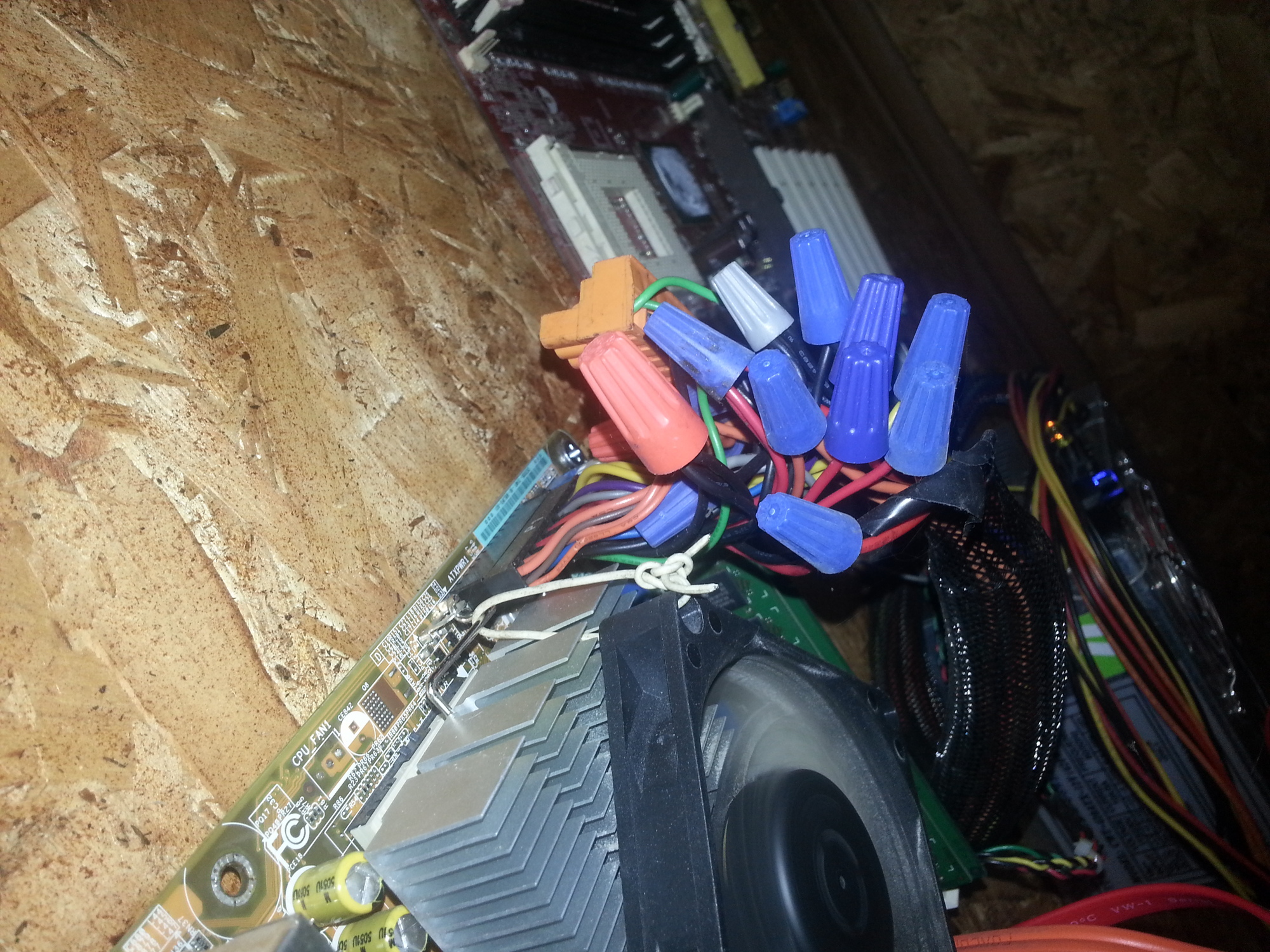 And my latest ghetto mods...
Xbox 360 needed more than 4gb of storage, so I chucked a external DVD-rw out of its enclosure and put a 40gb IDE HDD in its place.
Then to keep the 360 from cooking itself I double sided taped a thermaltake fan from a heatsink after I put a few drops of oil in the fan to free it up, it was pretty stiff. and shoved wired into the 3 pin connector and voila. Instant cooling for the 360. 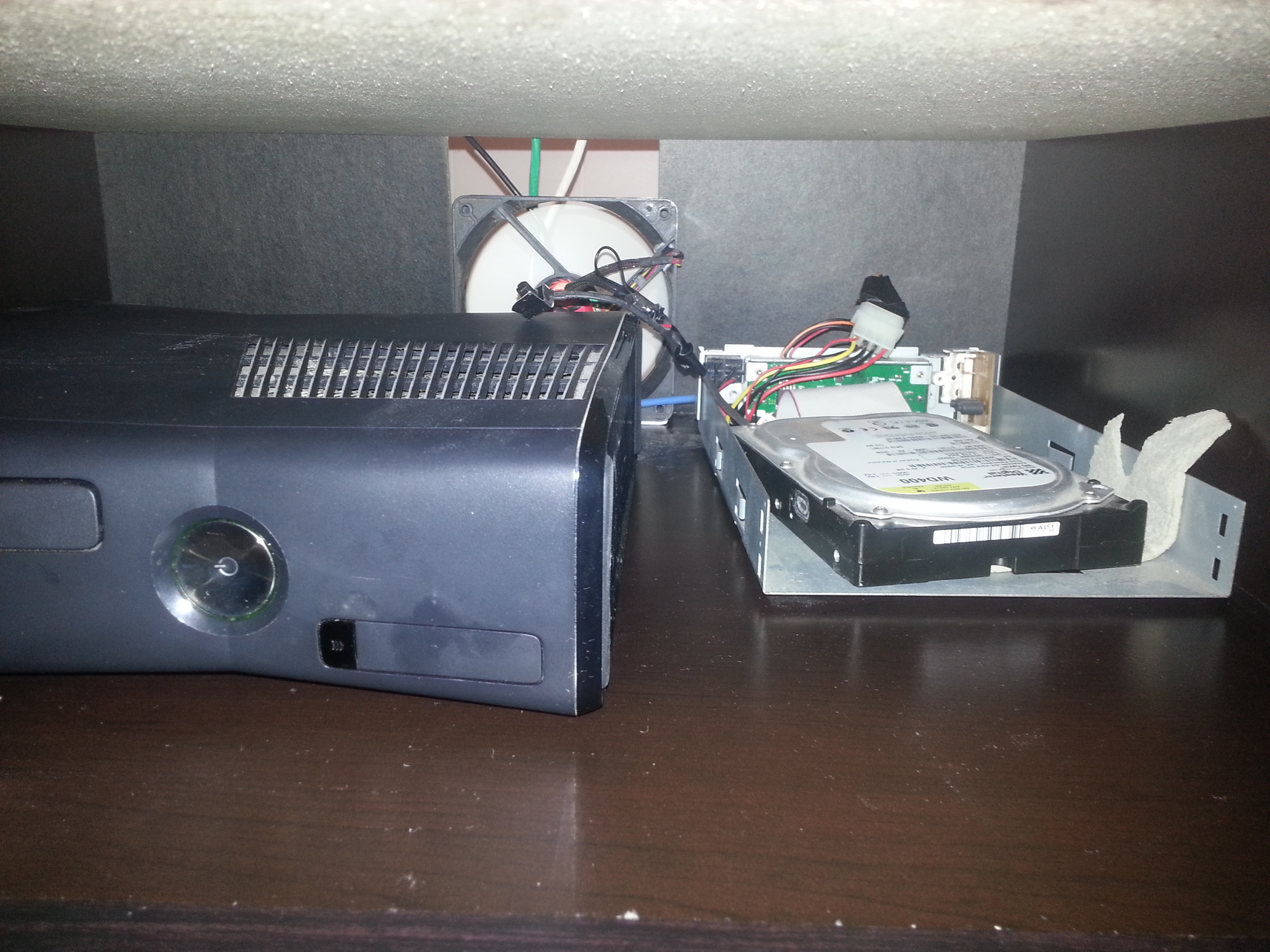 I had a long time issue with my speakers picking up radio signals. 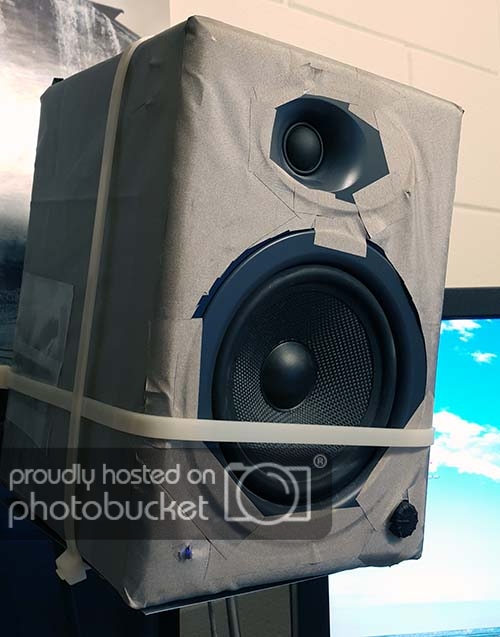 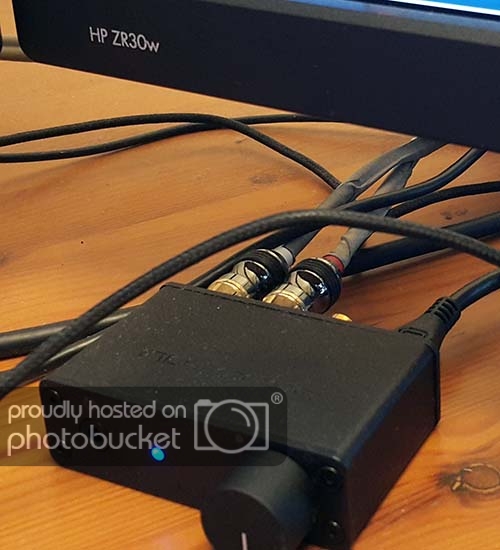 So I covered the speakers and cables with RF shielding and it worked.

Here's a video of the problem I had with older speakers.

My two TV tuner boxes (HD Homerun Prime) in my un-airconditioned basement were getting a little too hot and resulting in artifacts in the recordings (at least this is what I think causes it) so, I have a couple of low power PSU's and lots of fans kicking around... 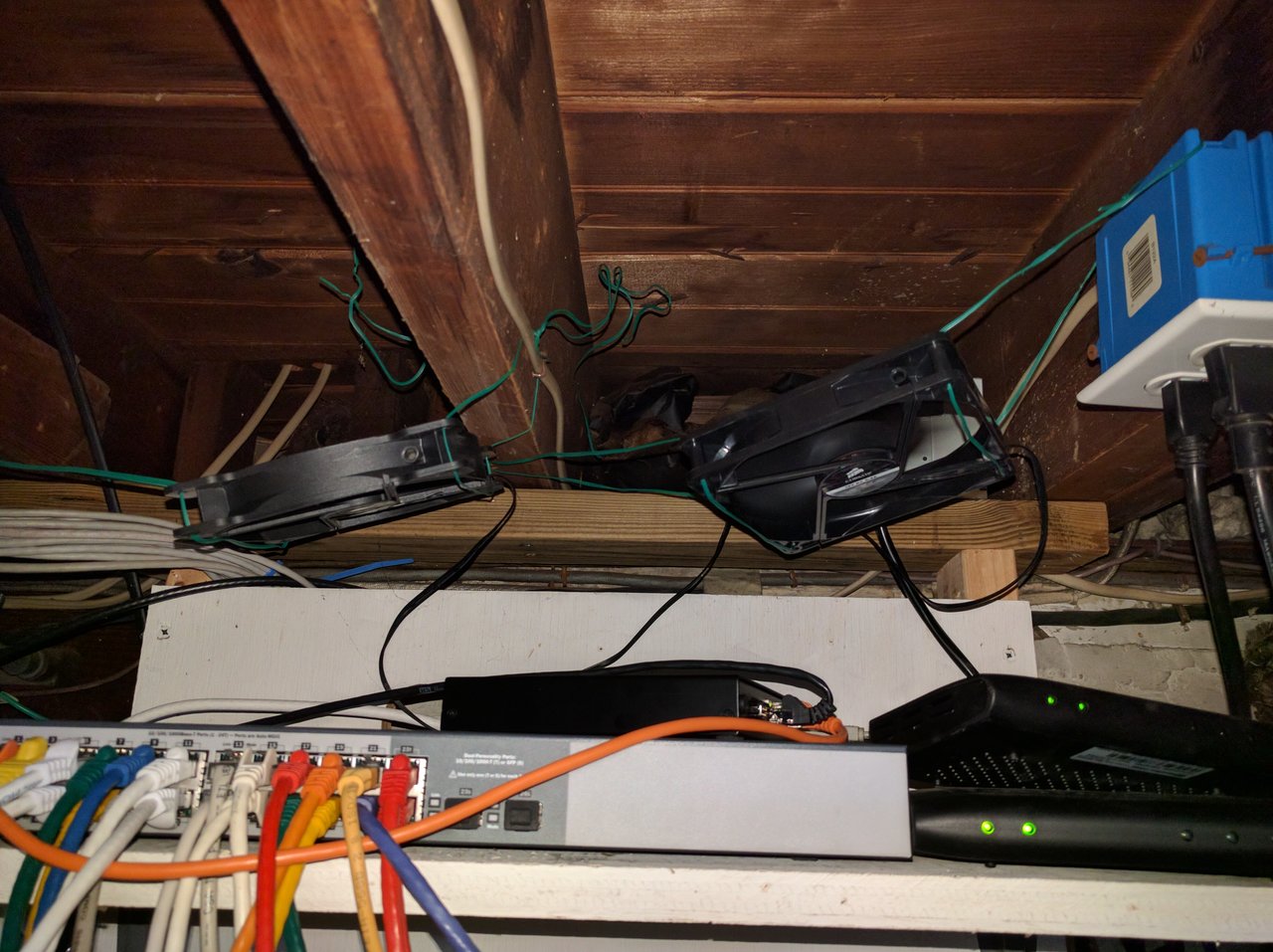 Those are green gardening twistie ties threaded through the 140mm corsair fan holes and then twisted around whatever I could find in the ceiling of the basement.

The 150w PSU that I pulled out of an Antec ISK case is sitting right behind the black fan on the left, with a paper-clip trick keeping it powered on.

rigurat said:
I had a long time issue with my speakers picking up radio signals.

So I covered the speakers and cables with RF shielding and it worked.

Here's a video of the problem I had with older speakers.
Click to expand...

Do you live really close to a massive broadcast antenna?
M

Zarathustra[H] said:
Do you live really close to a massive broadcast antenna?
Click to expand...