got my new net

What in the hell. (Near) gigabit symmetric? I hate you.
I

Irockzz said:
got my new net

Whoa!! Someone has a direct feed for sure!

Symmetric is the only way to internet I've been anticipating this for a week but seriously did not think it would get turned on before the tech visit. I'm hoping all he will need to do is swap out my DVR for the newer one and be on his way.
V

I've been anticipating this for a week but seriously did not think it would get turned on before the tech visit. I'm hoping all he will need to do is swap out my DVR for the newer one and be on his way.
Click to expand...

Dang i cant wait to get my 1Gb Up/Down. Only 99 a month. Just gotta give my ISP a call and have them flip the switch lol.
T

Sorry! I was stuck on 18/1.5 for the first two years here, switched to Cox for awhile with 50/10 that went to 100/20 along with a huge bill increase before going back to AT&T once 45/6 was offered from them. About a year later they started overprovisioning them so it typically ended up as a 55/6 connection. I have always found AT&T offering much more stable latency with either ADSL or Fiber than Cox in my area.


AliceCooper said:
Dang i cant wait to get my 1Gb Up/Down. Only 99 a month. Just gotta give my ISP a call and have them flip the switch lol.
Click to expand...

It is nice just to have the burst when needed and available. Not too many hosting servers I have tried seem to support the full speed. For example I typically only see about 500Mbps sustained on Steam's Dallas servers. Overall I would have been happy with the 300/300 option, but it was discontinued before I upgraded. Rumors I have read indicate AT&T may end up offering a 500/500 in the future that I would consider going to if it would save at least $10/month. I believe the actual charge for mine is $80 since it is bundled with video, otherwise it would be $90. I opted into AT&T's Internet Preferences but the only thing I have really seen is they send everything through a proxy that replaces ads with their own stuff based off your browsing history. Adblock still works so not like I'm actually seeing them on devices that support it. It's not like AT&T doesn't already collect traffic history for other reasons so I figured it wasn't worth paying an extra ~$36/month. Just got hooked up last weekend. I'm surprised how well my USG-3P has held up, even under load!
I

it's a little slow today Upgraded the connection to 100Mbps So many people with 1gb internet!! Wtf, I want it! Considering I just got service installed and working yesterday, and considering it's supposed to be "60 Mbps + SPEED BOOST!!! to 100 Mbps" for 12 months, getting a 33% HELLA MEGA BOOST over that advertised speed is ok with me.

Of course as time passes sooner or later Mediacom will drop me an offer to bump up to the Gigabit package and I'll probably go for it at that time when it happens, right now I just don't have a need for that kind of bandwidth (and no real serious storage space to make use of it). I have joined the gigabit club!

I saw some ads that Verizon had brought gigabit speeds to my area and were offering it for $79.99 per month in a package with cable TV and phone.

Turns out the ad is mostly a scam. It's an introductory price for new customers only, that rapidly goes up after a year. At first I was disgusted by this and decided to ignore it, but the temptation pulled me in, and I decided to check the price. Checking doesn't hurt, right?

Well, it turns out it was only $20 per month more than my 150/150 service, so I signed up. I figured I can always drop it down later if I decide it isn't worth it, right?


Verizon advertises it as Gigabit* speeds (*Up to 940/880 Mbps). So technically not gigabit, but close enough.

On my windows dual boot (configured in pfSense to circumvent the VPN, as I only use it for games, and want the lowest possible ping) after doing some speedtest.net server shopping, this was the best result I was able to get:

Router CPU load was negligible without using the VPN service.


In Linux (which goes through the VPN like all the other traffic in the house) speeds were (as expected) somewhat lower:

The speed limitation appears to neither be Verizon based (I can speed test to NYC without the VPN at speeds in the 800's) or router limited (CPU load on the router is at ~27% at 500mbps) so I'm guessing ~500mbps is what the VPN service can handle.

Still not disappointed. It's honestly better than I was expecting. On a side note, the fact that I only lose 6ms in ping through the VPN is still kind of shocking to me.

I might try switching to PIA's Montreal VPN server (roughly as close as NYC) and see if it performs any better. Montreal will have the added benefit of allowing me to use port forwarding. (None of PIA's US servers allow port forwarding for some reason).

At this point I'm undecided on whether or not to keep the gigabit package. I really can't think of anything it does that makes my life better than 150/150, but it is pretty badass, and the added $20 per month is less than I spend on coffee at Dunkin, so why not? Also joining the gigabit club. After two years of incredibly unreliable internet I have returned to civilization! I love living in the Gig City! 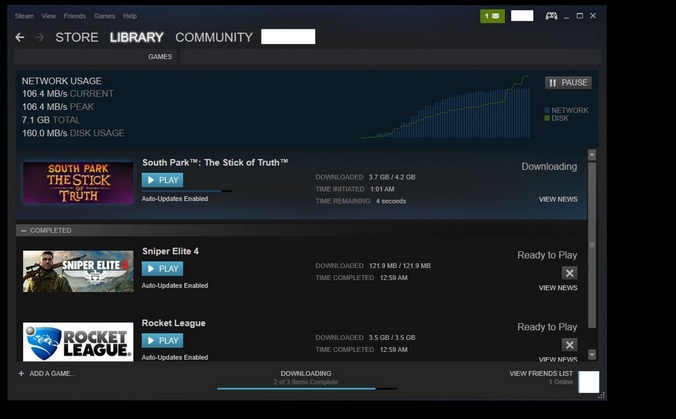 New member to Gig club, about 1 month in with FiOS. Speeds vary, probably because of internet congestion, end point connection abilities/saturation, and Verizon over-subscriptions. Still though, speeds are typically always above 300 and generally in the 700ish-900ish ranges. 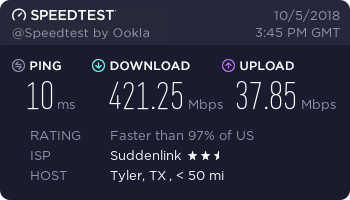 dali71 said:
I love living in the Gig City! 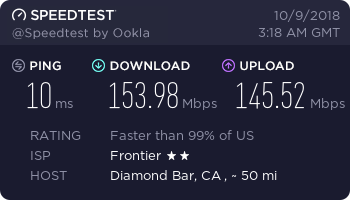 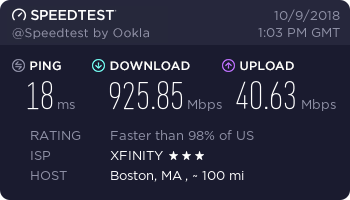 On ADSL I was running a solid 7.2 down 1 up lol. Recently swapped to Cable (yes cable not fibre, that's coming but has a cap of 100/40 currently anyway...) and I get roughly 57/5. This blew me away as it was. I can pay an extra 20 a month to get a speedboost to 100/5, but not really willing to at the moment. I've always had ADSL so this is amazing as far as I'm concerned. I rent alone with my partner over 4~ days a week but she doesn't really consume much data. It's definitely nice to watch some 4k content now .
E 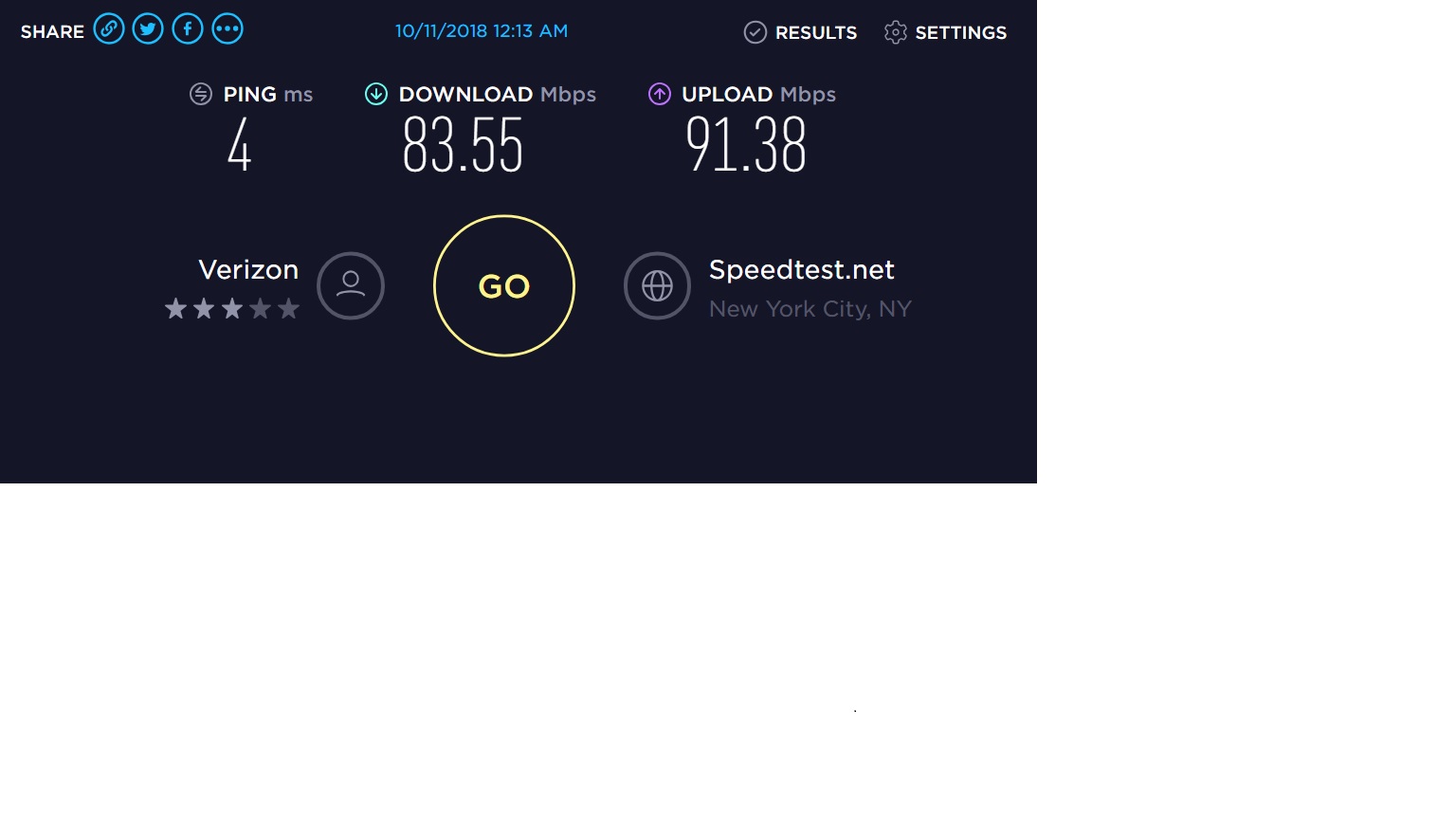 Here is mine. I download a lot of games, but I just can't utilize 1G internet. Maybe in a couple years I will. 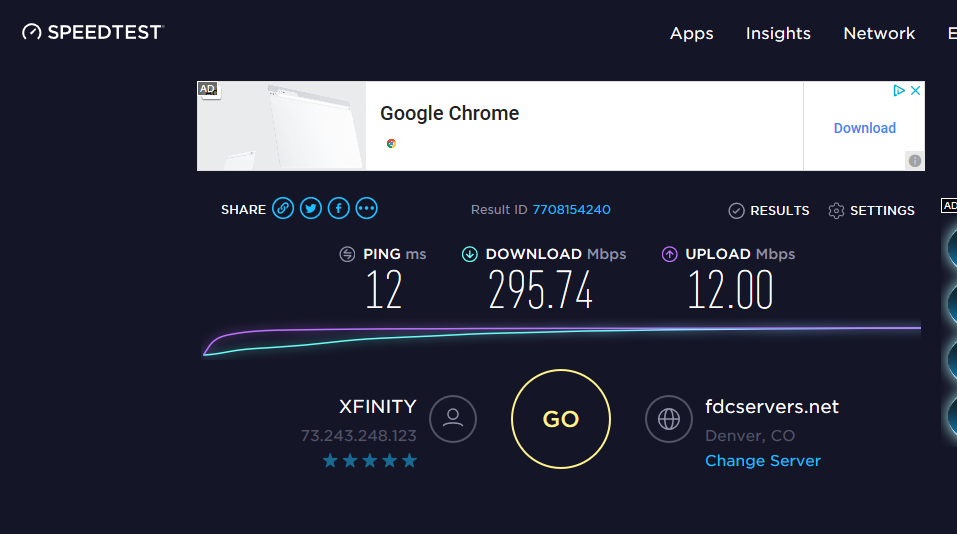 Replaced my onboard NIC with an Intel PCI-E card:

dali71 said:
Replaced my onboard NIC with an Intel PCI-E card: 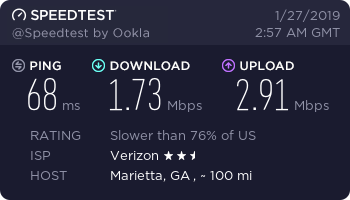 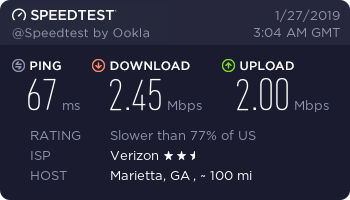