Just got a new case for my NAS/Home server, so I'm going to share my experiences with it.

I just wanted a regular tower case that holds 8 3.5 drives. My intention was a build that can work fanless for the most part. This case seemed ideal, it holds 8 drives, and has enough vents to make convection cooling viable.
It's a coolermaster case, so I didn't have much expectations, and I wasn't surprised. At least it's cheap, I've paid about $60 for it. TLDR: It's a great case for a budget build.

The packaging is typical, nothing new here: 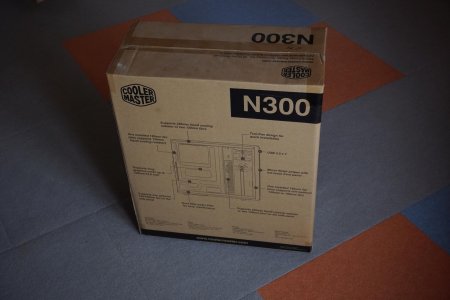 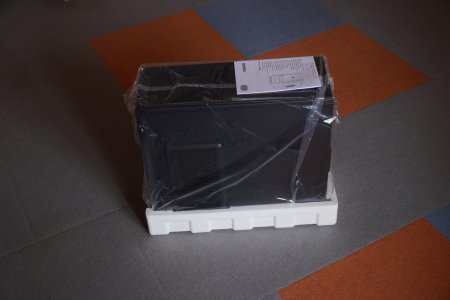 The case is very light, you can feel the cost savings already.

From the outside it isn't fancy, it's exactly what I've wanted: 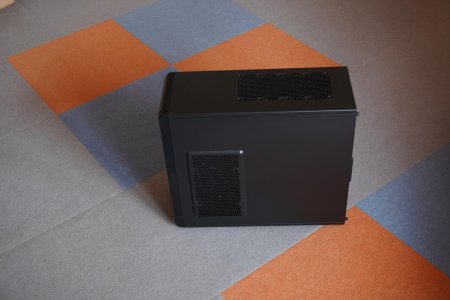 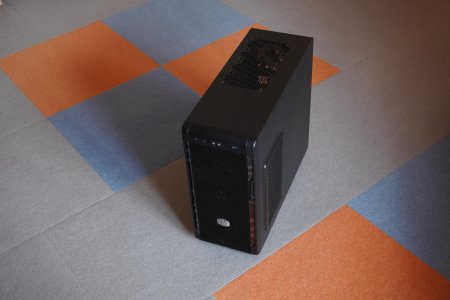 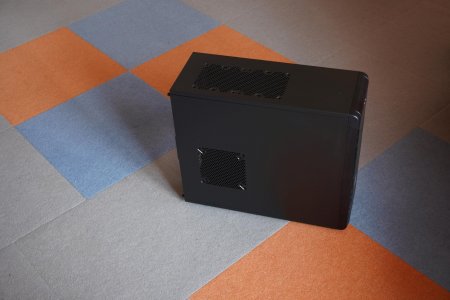 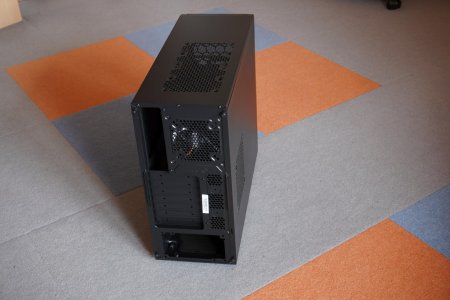 It was a surprise to me that the PSU mount is at the bottom and can be used upside down, didn't expect that level of flexibility in this price range.

The case comes with two fans preinstalled so it's basically ready to go from factory, you don't need additional fans for a typical build. This is great for a budget case.
The pre-installed fans are pretty silent, and work well, but probably won't last very long. 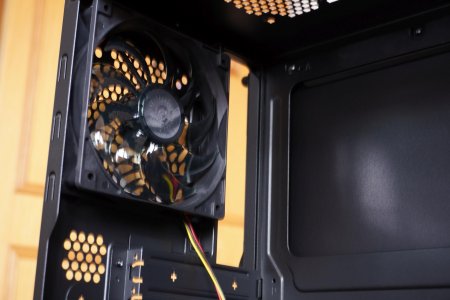 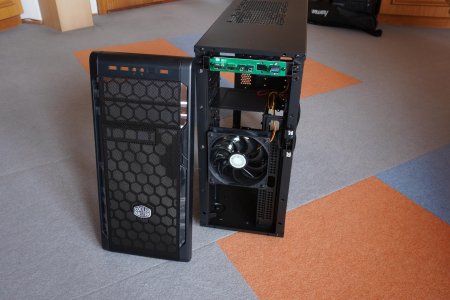 The front panel was extremely hard to pry off, I feared breaking the whole thing in half. It's a plus that the front panel comes off clean and cables aren't attached to it.
The side panel thumbscrews are typical coolermaster, at least one of them is impossible to release / fully tighten without a screwdriver, so it might as well be regular screws.

The inside of the case is what you'd expect: 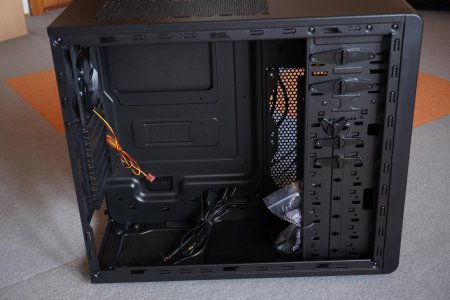 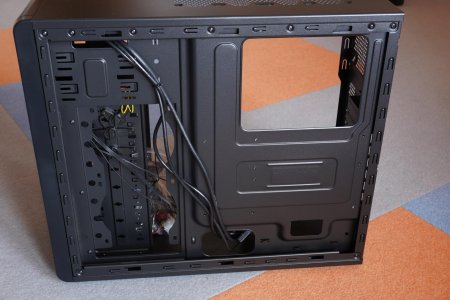 The MB tray is in a recess compared to the rest of the case so if your MB is even slightly wider than ATX spec it won't fit. Which was the case for me unfortunately. But I still managed to squezee it in by installing longer standoffs at the front, so it clears the step in the case. There was enough give to stil be able to install add on cards despite the MB sitting crooked.

There is not much space for cable routing in the back as the MB tray has very little clearance from the back panel. If you install fans here in the two slots you can forget hiding the cables altogether. But I don't see why would anyone use the side intakes here instead of the front mount points for two fans. Unless you want to squeeze a 240 aio here, but the drive cages aren't removable so it would be a tight fit and the airflow would be restricted.

And then there is something that is probably the stupidest design mistake I've ever seen in a case: 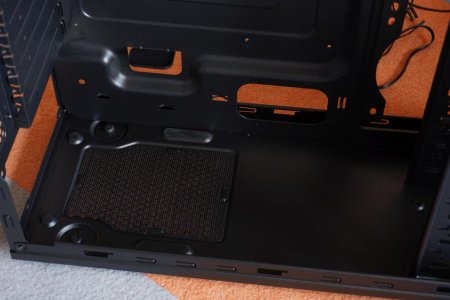 What's the problem in this image? Yes there is an intake fan filter for the PSU here. But the filter is on the inside! You can't get it out with a PSU installed to clean it. So each time you want to clean your fan filter you have to detach the PSU! And depending on the environment it's recommended to clean filters every 2-3 months at least. I would not want to remove my PSU every time to do that. I'd rather ditch the filter.

Since I was going fanless this doesn't affect me as I installed the PSU upside down so heat can dissipate from it without the fan running. 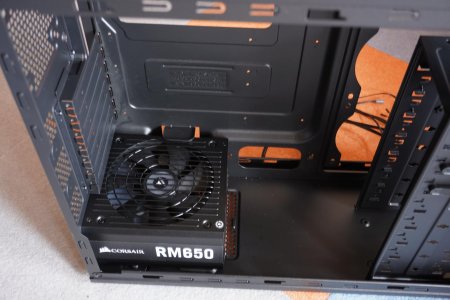 Let's pick up where we left off.

Installing everything was pretty straightforward, 8 3.5 spaces 8 drives installed, with the provided screws. And if I wanted I can still add 3 more HDDs with an adapter (not included) to the 2x5.25 expansion spaces. So this case is ideal for storage on a budget.
The only issue as mentioned is that the MB sits crooked. But it still clears the drive bay, and the cooler clears the side panel so it's all "fine". 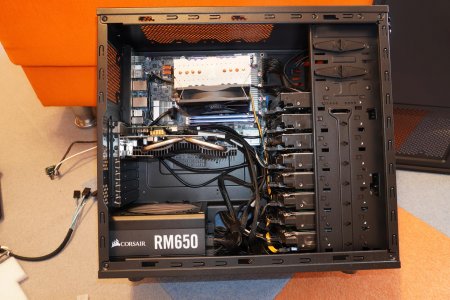 Because the disks aren't padded in any way just direct metal to metal, the whole case resonates when they are spinning. I solved that by adding foam padding to the bottom of the case, which it sits on now instead of it's own legs. This took 90% of the noise away.
And since the drives are just cold storage for me, they only spin a few hours during the day otherwise the system is noiseless now, when idle. 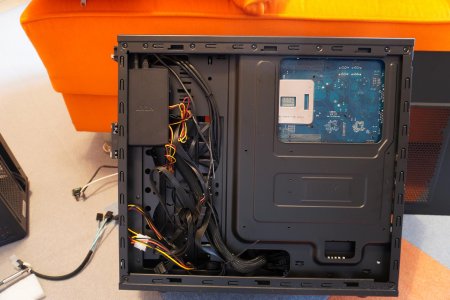 As mentioned there is not much space behind the back, and zero if you installed fans here. Had to move the fan controller into the recess too, as the side panel wouldn't fit with it being in the position on the picture.

Finally a test run before adding the side and front panels. 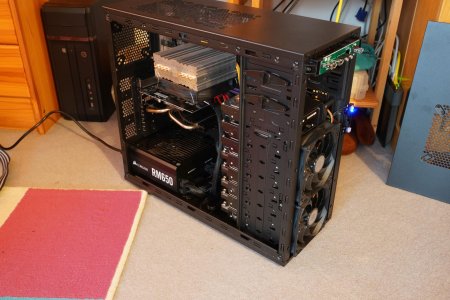 In this configuration when all fans are at zero rpm, the coldest HDD is 35C the hottest one is 43C, of course without much load. CPU is around 53C idle with the fan turned off. Idle means lots of background services running, but nothing demanding.
The fans are configured to turn on when the CPU temp exceeds 55C. Unfortunately the garbage tier nzxt fan controller cannot read HDD temps so the front fans are also tied to the CPU temp. I guess I'll manually crank up the fans if I do any excessive data movement.

I'd recommend this case for all kinds of budget oriented builds, even gaming PCs, if you don't care about styling that much, just want a functioning system there is no reason to spend more than this on a case.
You must log in or register to reply here.
Share:
Reddit Pinterest Tumblr WhatsApp Email Share Link
Top