So I was gaming and noticed a light from the inside of my case. It was fire. The wonderful smell of burnt plastic for the next hour. I turned the system off, disconnected the DVD Rom and pulled it out. The rest of the system works fine. I did not use a sata power cable but a 4 pin adapter. Is it likely to be the DVD Rom or might my power supply be dying? Could a loose connection have crossed wires?

Was the DVD drive being accessed when it caught? Just curious.
J

no, I don't use it much any more, with steam and all
A

could have been a dodgy SATA power adapter.
what make/model PSU are you using? maybe test the connecting cable with multimeter.
O

jiminator said:
So I was gaming and noticed a light from the inside of my case. It was fire
Click to expand...

"Any electrical connection can loose integrity and when it does, heat will be generated. In this case it looks as if enough heat was generated to melt the plastic which caused pins to short out. The pins are close enough the plastic wouldn't have to warp much allowing this to happen. Once the pins shorted the plastic then heated to the point of catching on fire. Pins shorting out could cause damage to the power supply, so if the PSU showed to be damaged that doesn't mean the PSU was the cause. Power supplies can't damage connector because there is no load within the connection unless its a bad connection."

Another thread of general interest here:

"What a god-awful hack crimping two 20 AWG wires together at the molex contact, where all the current will flow... That sure is a fire waiting to happen. And no matter what, don't ever use a sata-> molex adapter for powering anything more than a hard drive! The SATA connector is rated much lower than that molex connector, at 4.5 amps max under ideal circumstances."

On amazon, looking at several molex to sata adapters, several users reported badly made counterfeits and at least one that also caught on fire.

If I were you, I would get a PSU that didn't require that you use an adapter.
D

This is obviously not a normal thing. That's like saying I've owned dozens of cars and none of them have ever caught on fire. It still happens. I'm hypothesizing that it was in fact the molex connector. It was obviously the 12V line that caused it, don't know why it happened though.
F

I've seen a lot of different junk adapters, that's why I build my own cables now. Some are AWG20, some have the black cables (ground) mixed (I don't know if this is a problem though).

But this still makes me a tiny bit worried...
A

The SATA power connector is great in many respects but the pins are very thin and very close to each other, so if it's of poor quality or gets damaged, this can happen. I have to use all kinds of adapters so I buy the best quality ones, usually on German websites.
J

Thanks guys. The thing had been in use for 2 years. I'll test the voltages before replacing it.

never seen it or hear of it happening until now....

If the molex adapter would have been the problem, it would have burned up. The problem was obviously where the SATA connectors met on the drive. If the system did not shut itself down, then there was no a short (unless you have a really crappy PSU). It had to be something acting as a resistor where that big burnt spot is.

Those drives all operate on the 5V line, right?

Actually, looking at the connector it appears the burn was between 12V and ground. That's more understandable.
W

Was the aftermarket adapter a generic cheapie?
I have read that some ebay/china adapters are shipping with poor quality and 22/24 gage wire.
This does look like a short to ground, though
T

strange the psu didn't shut off, looks like whatever happened it was at the connector either on bluray or adapter side, hard to tell. I'd replace the psu (no failing after a short like that is scary) and the bluray and adapter...

tazeat said:
strange the psu didn't shut off, looks like whatever happened it was at the connector either on bluray or adapter side, hard to tell. I'd replace the psu (no failing after a short like that is scary) and the bluray and adapter...
Click to expand...

Either the PSU was REALLY bad, or it wasn't a full short, but rather a high resistance conductivity, enough such that to the PSU it looked like current draw from a real component, and it didn't shut off.

Either way, I wouldn't take any risks with the rest of your hardware. Even if it wasnt the cause, the PSU may have become damaged as part of this failure, and could pose a risk to your hardware.

I'd just replace it before using it any further to be on the safe side.

Wow, I've never seen that happen before. Did you at least make s'mores before powering it off and pulling OD out?
H

We keep talking about the power supply, what the hell brand was it?
J

PSU is a thermaltake tr2 rx 850W. my sata drive is on the same cluster, also using an adapter. guess time to back up. have to find my voltmeter to test....

jiminator said:
PSU is a thermaltake tr2 rx 850W. my sata drive is on the same cluster, also using an adapter. guess time to back up. have to find my voltmeter to test....
Click to expand...

What is the lot number.

Those TR2 RX units ranged from fire hazards at 60% load and ultra shitty noise/ripple at 50% load (shitty as in beyond acceptable in ATX spec) to still bad. None of them were really passable/good when new, to say the least being worth the retail cost of places that carried them like BestBuy.
P

jiminator said:
PSU is a thermaltake tr2 rx 850W. my sata drive is on the same cluster, also using an adapter. guess time to back up. have to find my voltmeter to test....
Click to expand...

Single rail designs are definitely clean and make designing a system easier, but delivering 69A on a single rail creates some risk. That connector may not have completely shorted, but it didn't have to a "high resistance conductivity" either. You could go as low as 0.2 ohm without tripping a 69A over-current protect. And that much current over the small gauge wire in the SATA Power connector is guaranteed to get really hot. Hot enough to catch fire (apparently...).
J

Single rail designs are nice when they are done right. TR2 RX units were not done right:

There were two or 3 batch numbers of 850W, one of which was a fire hazard the other two being poor but could at least put out their rated power without exploding IIRC.
B

I just had the same fire with a LG DVD internal drive. Nothing else burned but the power adapter plug, SATA plug and lots on the LG connector area - about 2 inches across the connector.
I replaced the DVD with an old HItachi, removed the burnt power adapter short cable, and the Hitachi works perfectly - so I ASSUME it was the LG drive OR the small power adapter wiring.

Molex to SATA = OK, with a good adapter

SATA to Molex = Danger Will Robinson

I mean, SATA to Molex can be OK, but it falls on you the user to be smart and power the right type of things with it. If you connect something molex via a sata cable that draws more power than the SATA connector is designed for, you can have problems.


I used to use adapters more than I do today. While theoretically OK if you don't do something stupid (like SATA -> MOLEX -> PCIe) and over draw current, I have learned the hard way that power adapters and extenders are often cheaply made Chinese junk that doesn't hold up in the real world.

That's what happened with this EPS 12V extension I used with my old motherboard: 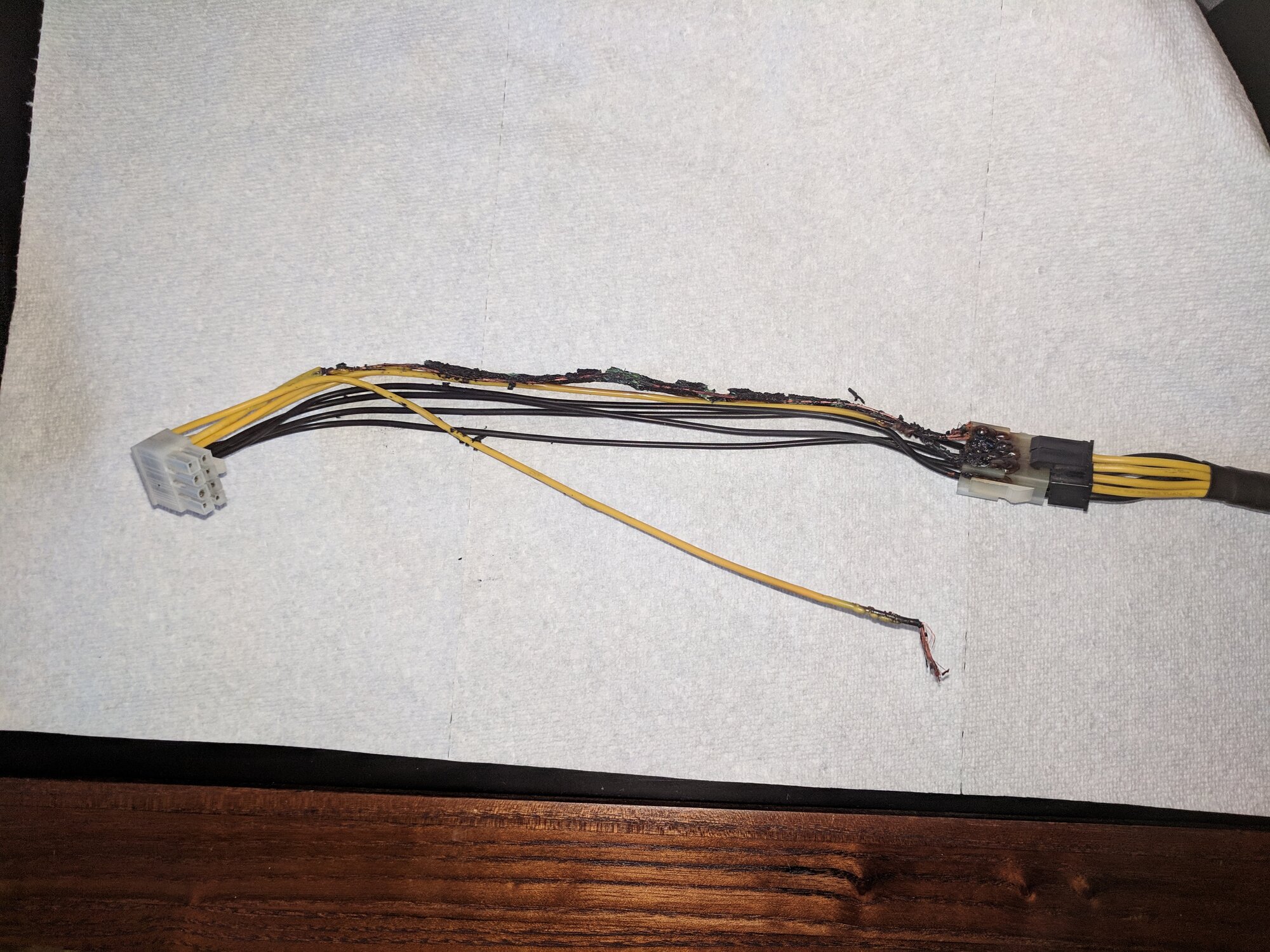 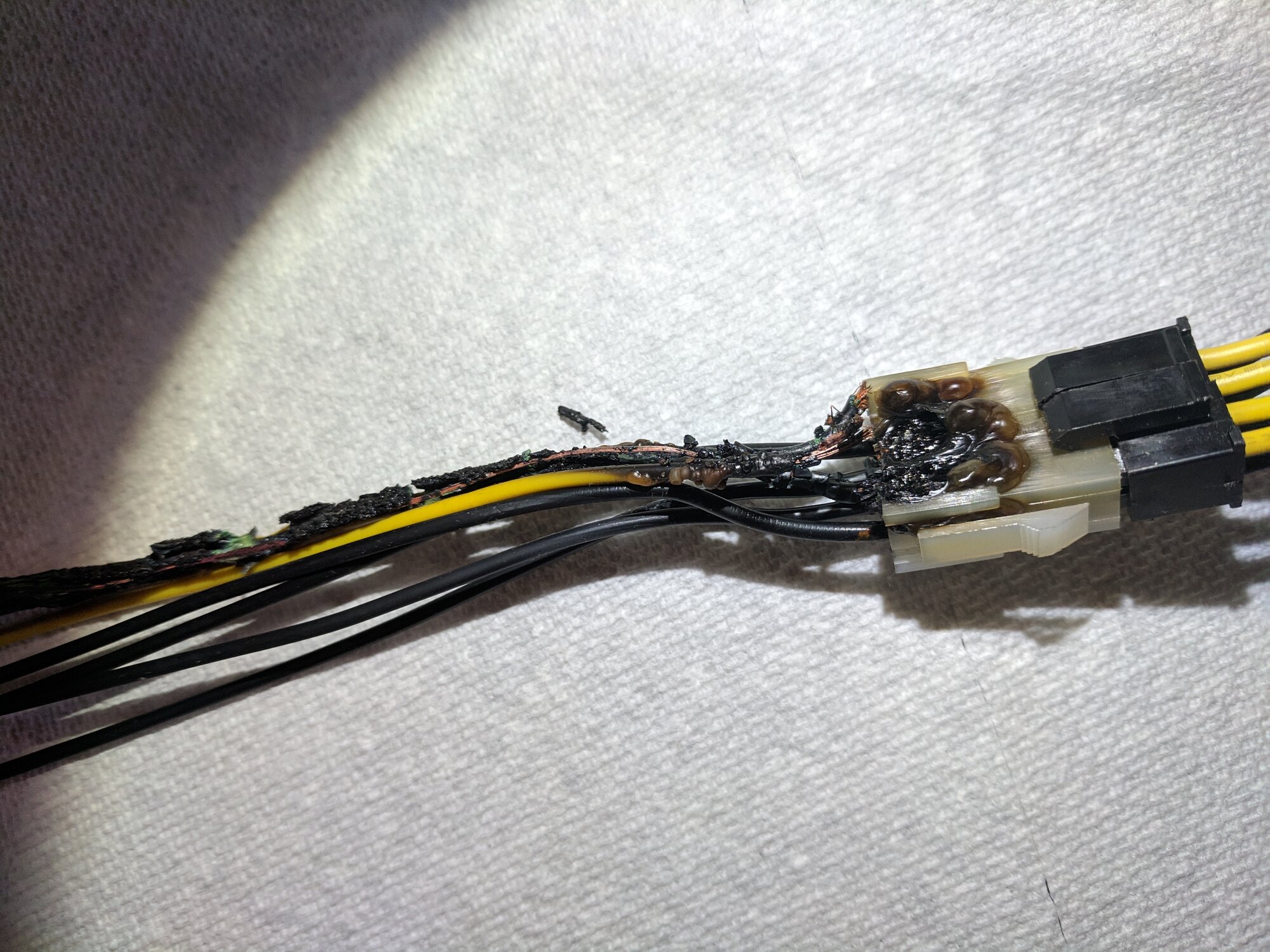 These days I try to only use the power cables that come with good modular power supplies unless I ABSOLUTELY have to, and I make sure to carefully inspect the connectors and crimps before I install an adapter when there is no other option.
D

The wires on that look like they are not the proper wire gauge.
L

drescherjm said:
The wires on that look like they are not the proper wire gauge.
Click to expand...

likeman said:
looks way more then half the thickness then needed (more self inflicted damage)
Click to expand...

But that's exactly it.

They are not putting their wire gage specs on the package, and everyone knows you can't judge wire thickness from the outside of the insulation.

A 12v EPS cable is speced at 28amps/336W. When a consumer goes into a store (MicroCenter in my case) all they can do is trust that something being sold as an EOS cable actually meets the EPS spec.