Come on guys, I know you're out there on the [H]... how about we get a thread going with photos of your Eyefinity setups?
I

No takers? Alright, I'll start it off.

My son's rig is on the right, its his xmas present. He'll be gaming tomorrow
S

Thats rediculous, and unfair to your son, you get 3x more monitors!

Ned moar pix, these setup's are amazing.
I

^ He needs to remember whos the boss I've got his entire setup wrapped in paper, looks kinda funny. He gets here soon, cant wait!
L

haha what a awesome dad!
L

i never gave eyefinity much thought till now...that is really fuckin cool

I will post up when I get my other 2

I'll have to get some shots while playing, and plus with my G25, but this should give you the idea: 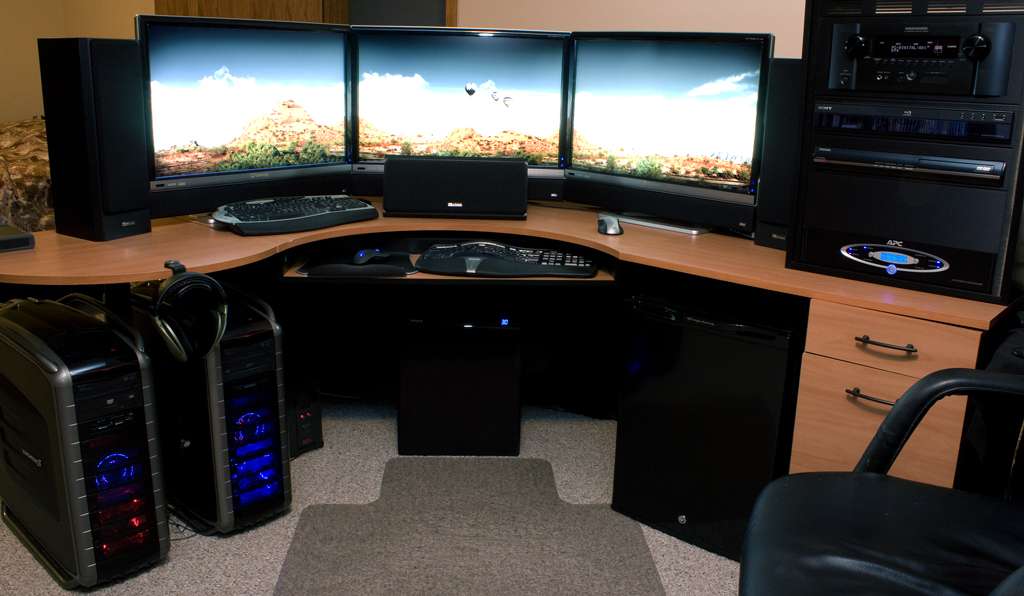 There are some in-game 7680x1600 shots in my Screen Shot Thread if interested. Specs in sig.

There are some nice setups here, kudos gentlemen (and ladies if present).
Last edited: Dec 27, 2009
N

for a second I thought you used your mouse with your left hand.... but then I thought, it really doesn't matter. Because I hate you.

Seriously though that is an amazing set up there.
Last edited: Dec 30, 2009

bladeiai said:
for a second I thought you used your mouse with your left hand.... but then I thought, it really doesn't matter. Because I hate you.

Seriously thought that is an amazing set up there.
Click to expand...

Just wondering, how would i hook up my third monitor if it doesn't have displayport. I see some people have done that (dude with the three asus monitors)
C

I just bought one becuase of the insane deal on Newegg for them but I sent it back because of the horrible over-saturation and unacceptable back-light bleed. Not to mention the ridiculously bad black reproduction.
I

enyownz said:
Just wondering, how would i hook up my third monitor if it doesn't have displayport. I see some people have done that (dude with the three asus monitors)
Click to expand...

I first had the Bizlink adapter that I bought from Dell. and experienced the monitor cutting in and out . Like many others have experienced.
There is also an adapter (Accell) that you can buy through amazon. more people have had success with the Accell adapter which is basically a subsidiary of BizLink Technology.
Why the Accell one worked, and the Dell one didn't I really don't know .

These adapters are manufactured in China. and Mexico. and Involve the use of many internal components (Chips). I suspect come from different sources and that could be one of the problems among other things.

and Sapphire is now putting out the same adapter. With there sticker on it . and I'm almost possessive it is the same Bizlink adapter but with a Sapphire sticker on it.
I find it kind of a bold move for Sapphire to claim that they "Solved the Eyefinity issue!" when in fact this adapter was available way before DEC 14 2009.
"Now SAPPHIRE has introduced an active powered DisplayPort to DVI converter".
I kind of think this is misleading. The credit should go to the people that really introduced it. and really . You cant tell me that they Tested this thing before putting there Sapphire sticker on it.
People that have got the Sapphire Adapter have been having problems also .

I do know that ATI is working on the Issue. and after returning the Dell adapter and then getting the Accell from amazon I havn't had any more issues.

HP has the same adapter . Burt I cant comment on that one because no one in there right mind would buy that one. at $150 USD

which dell monitors are those?
N

enyownz said:
which dell monitors are those?
Click to expand...

This is my first post here on [H] i think but just wanted to show you folks there is afew more of us out there running the setup.. i run my 3 all vga with one HD5850 and it works flawsless..

@fanboy - What DP adapter are you using? Im looking for one that works *flawless* myself, and i have a 5850 too

fanboy said:
This is my first post here on [H] i think but just wanted to show you folks there is afew more of us out there running the setup.. i run my 3 all vga with one HD5850 and it works flawsless..

I think it is killer you post that picture, I post up right there on that map and wish I could see that ramp and that door way to your right, are you able to see the door way? you cut it out in the picture

nice setup, cant wait to get my other 2 monitors for EF
D

I am useing this connector ..

which is VGA so i decided to keep my DVI ports off card the same useing standard VGA/DVI video card connectors so all 3 LCD's are doing VGA at 5760 x 1080 and i can't tell much diffrents other then no HDCP for Blu-Ray.. I don't run the deaktop in eyefinity because i get the flickers in 5760 x1080 but gaming is smooth..

For COD 4 /WaW/ MW 2 you will need to use widescreen fixer here to get the FOV right..

Nice...congrats as being the only person with a portrait setup in this thread (where is Zorachus?!?).

Have you tried it both ways, or do you not have the room for landscape? Also, do you play any games that don't support Eyefinity?

imyourzero said:
Nice...congrats as being the only person with a portrait setup in this thread (where is Zorachus?!?).

Have you tried it both ways, or do you not have the room for landscape? Also, do you play any games that don't support Eyefinity?
Click to expand...

Does any game "support" eyefinity? I thought technically, NO

but games just tend to work or don't work

welllllllll... my gear should all be here on weds.. I am going with 3x 24" 1920x1080 displays in landscape.. with the one westy I am on now I feel like portrait will just feel a lot like what I have now, with more pixels though.. but just "what I am looking at" will feel kind of smilar.. so I am after the wide field of view with this... should kick some serious ass for L4D2 and lotro..

some nice setups here.. I'll add mine once it's done.
P

I thought I'd be happy if I had TWO monitors... you guys just made me REALLY jealous! >:-(
Z

This should be called the Envy thread... Really makes me want to sell my TV and pick up 3 23" LCDs.
F

Does any game "support" eyefinity? I thought technically, NO

Yes.. HawX and Dirt 2 without any other support needed.. widescreen fixer works for all the COD games..

ok, got all my shwag tonight... the pile outside our door was huge. lol. spent all night moving stuff around.. finally got to test it out.. this is kind of my quick and dirty desk config.. but it works

still can't find that ruby one posted above.. *sigh*

it's quite a change from being on one 37" display.. at first I almost felt like maybe this wasn't such a good move.. but the more I play on it and get used to it, the more I am realizing it's totally awesome. spent a grand total between the 5870, DP --> DVI adapter, and LCDs so I think I did pretty well for what I spent on it.. the displays are Auria eq236 (1920x1080 / 23.6" / 5ms / 2ms with OD / M236H1-L01 samsung panel) which I got for 180 each (no tax free shipping) and so far I like them a lot. still getting used to a smaller wider view... it's quite a change from the westy... I might eventually turn these into TV sets around the house and upgrade my panels but for now this works for a base eyefinity setup.

edit: one thing I notice using eyefin is I need to use D3Doverrider now all the time to hard set my vsync and triple buffering. oh and L4D2 on eyefin is OMFGWTFBBQ!!
Last edited: Jan 6, 2010
N