How profitable is mining, really?

Hi guys,
Wondering how profitable it actually is to get into crypto mining.
How much one could expect as an initial investment to get running, the cost to run the server, and the expected payout?
Maybe if you mine, let me know your return rate?

I've always played with the idea of making a mining box, but I just really don't know if it would be worth it.
A

you are 3 years too late.


This information is still generally accurate, and easy to see and understand for greenhorns. Select your card, select your electricity rate, and see your generally negative earnings unless you have newest gen hardware.
https://www.nicehash.com/profitability-calculator/nvidia-gtx-1070

Newest gen cards make a tiny little bit, one generation old cards basically break even against the cost of electricity, and anything older loses money - and that's about the way it goes. 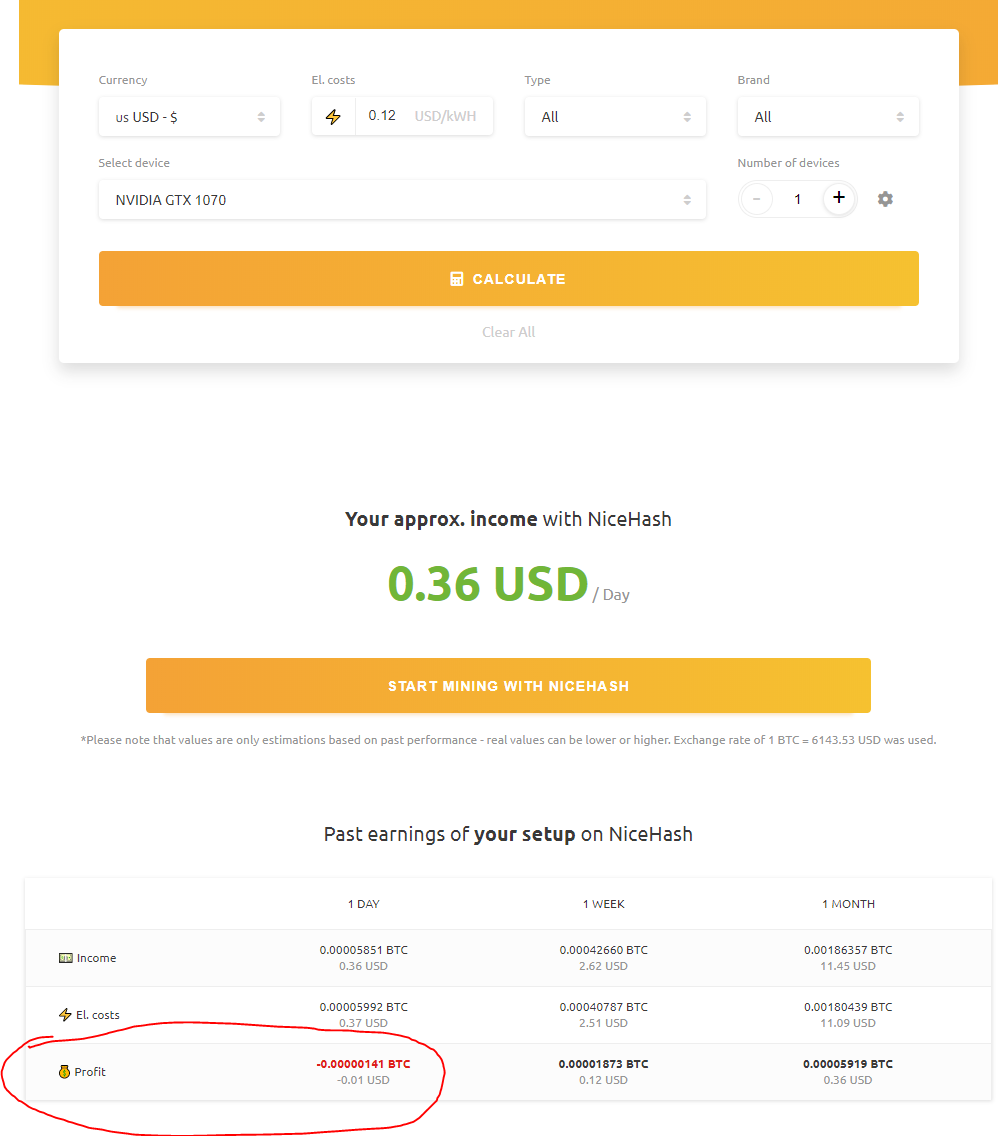 lol jeeeeez. Had no idea it was that bad! I wonder how all those mining companies are doing now.

If you are going to buy equipment to mine, you are wasting money. Just buy your coin of choice instead.

If you are mining with equipment you already have, you might break even in the short term if you're selling immediately. The gamble is that if you hold it, it will increase in price. For example, that $0.36 you make a day with a 1070 might be worth $2.00 a day in 5 years.

Either way, still not worth it to buy masses of equipment to mine just buy it from an exchange instead.
T

kirbyrj said:
If you are going to buy equipment to mine, you are wasting money. Just buy your coin of choice instead.

If you are mining with equipment you already have, you might break even in the short term if you're selling immediately. The gamble is that if you hold it, it will increase in price. For example, that $0.36 you make a day with a 1070 might be worth $2.00 a day in 5 years.

Either way, still not worth it to buy masses of equipment to mine just buy it from an exchange instead.
Click to expand...

5 years? Have you seen the price fluctuation in the past 1 year?
P

Yeah, so not profitable at all right now. But if you want to mine today (with hardware you already have), consider it an investment for when the price rebounds. Otherwise, just buy.
B

Depends where you are. Electricity is cheap where I am, 10 cents kwh. Makes it easier to turn a profit for sure
P

blackmomba said:
Depends where you are. Electricity is cheap where I am, 10 cents kwh. Makes it easier to turn a profit for sure
Click to expand...

How do you figure? With the low price of BTC right now, even a 2080Ti is only making 27 cents/day profit with power at 10 cents/kWh.
B

Parja said:
How do you figure? With the low price of BTC right now, even a 2080Ti is only making 27 cents/day profit with power at 10 cents/kWh.
Click to expand...

Parja said:
How do you figure? With the low price of BTC right now, even a 2080Ti is only making 27 cents/day profit with power at 10 cents/kWh.
Click to expand...

t4keheart said:
5 years? Have you seen the price fluctuation in the past 1 year?
Click to expand...

I don't see any large scale miners ever really reaching a decent ROI in the current market. That being said, the 1st gen ETH asics are on their way out due to the 4GB memory limit on them, so it could be profitable in the short term as long as your video card has more than 4GB of VRAM. But I still stand by buying most crypto on an exchange (and maybe using idle hardware you already have to mine in spare time).
Last edited: Mar 22, 2020
P

blackmomba said:
Which calculator are you using? Nice hash says 1.18 Cad per day profit for a 2080 ti
Click to expand...

The big number they show you is just income. Gotta look below to see what your net profit is. ~2/3 of your income is being eaten up in electricity costs.
S

Quite frankly, it has very rarely been profitable to mine and sell as you earn over the history of crypto. Only when price goes parabolic/to the moon does it become super profitable to mine and that's only until the price deflates or everyone else gears up and difficulty increases. The real way you make money with mining has historically been mine and HODL. Imagine if it was 2012 and you've got 3-4 cards mining 1 BTC/day that's worth $1-2 at that time? That was after price mooned to $30 and sank back down to that level.
L

A lot of people try to mine first, and then when they get not so much BTC they simply try to buy bitcoins for one price, and sell by another a bit higher price. So it's becoming kinda trading relations. I found this resource couple of months ago ( url: https://swapspace.co/ ), and what I can say for that period of testing time, is that they have the most total list of crypto currencies, which you can convert from one to another. And their rates of exchanging are pretty profitable.
Last edited: Apr 7, 2020

Perspective has a lot to do with it. During the winter, mining to me is all profit because I utilize the heat to reduce the usage of my furnace. Mining rigs are pretty good little space heaters. I have an electric furnace. So, I'm not comparing to cheaper gas right now. Now that it is warming up, my mining is now zero as it isn't worth it to mine and I certainly don't need to mine at a loss to HODL. I can buy crypto at market value (which is more than mining at a loss) and HODL that for better odds of returns and profit. I also do not recommend going out and buying hardware unless you like flipping hardware every couple months which is also a gamble. Even low energy crypto like BURST isn't really worth setting up mining rigs anymore as the ROI just isn't anywhere near there. If you have the hardware already sitting around not doing anything, that would be different. If you have solar or wind turbine power that has already ROI'd itself, then sure consider using it for a gamble but I would say probably a better gamble to just sell that to the electric company.

Look at it this way. A single cell phone that cost me less than $10 earns me ~$1.50/day just streaming videos. My 20threaded CPU dual 1070Ti box mining NiceHash doesn't even have those profits. During warm months it is even worse because of cooling needs. Which would be smarter to invest in and run 24/7? The cell phone can burn itself up and I won't even care. The PC will require a lot more maintenance and won't ROI realistically unless prices skyrocket again like in 2017...
N

I bought 13 GTX 1060 3gb back in summer 2017 if I remember correctly. I paid about $200/card and I believe everything including parts cost me around $3000.
Then I started mining. So if we exclude $3000 investiment into hardware, I started from $0.
By late December, I had $34000 only from mining. That's about $8500/month. I was living the life!
Then it crashed haha. I managed to sellall my coins and earn some $3500. Sold also my hardware and got about $2000 back.
Electricity cost was high, about $150/month just from the computers. And the heat was unbearable, even during the swedish winter.

It was fun experience, but currently mining is not worth it.
J

Shit, I'd say you're about 9 or 10 years too late. I started mining back in 2012 and only did it for about a year. I would have made MUCH more money if I'd just bought the damn coins instead. I was mining LTC when it was <$2 per coin. I spent upwards of $20k on hardware including 12k on two Cointerra Terraminers and 23 video cards.

A friend of mine bought 45 gpus and sold the coins within 6 months of mining them to payoff the expenditures on hardware & electricity. I only made money because I held onto about half my coins. Actually I haven't made any money yet. still HODLing. Waiting & wishing for another spike. Been waiting for few years now. The bear market from 2013-2017 was depressing.

So if you're interested in mining to make money, here's my advice: DON'T mine!
Just speculate and buy the coins instead.

ESPECIALLY going into the summer. The mining profit calculators never account for extra air conditioner load. Not a problem with < 10 video cards. Even 10 cards is going to significantly add heat to your house. Cycling outside air is dusty and dirty, bad for hardware & fans. The winter time is really the only good time to mine crypto, imo.
P

What about the companies still in business here in May 2020 that offer co-location services along with the newest ASIC miners such as the Bitmain Antminer S19 Pro with a hash-rate of 110 TH/s and a power consumption of 3,250 watts?

I read another thread here at [H] that few people at [H] use the ASICs to mine. Why is that?

Pocatello said:
Lots of hard-earned wisdom in this thread. In hindsight... what do you think was the problem? Was it mining in general? Was it mining at home?
Click to expand...

It's not necessarily a problem, it's the fundamental design of mining and cryptocurrency and the laws of supply and demand. The more miners that mine means the higher the difficulty (ability to earn) becomes. Miners are attracted to mine because they can make a return on their investment and turn a profit. So, as price increases, the incentive to mine increases until it reaches an equilibrium point to where miners are not willing to invest in order to earn the offered returns.

During the major run ups, supply of mining became limited because there was not enough hardware. If you remember back to 2014-2015, you couldn't find an AMD card in e-tail for a full year because you could buy a $250-300 RX 580 and make it back in crypto within 2-3 months of mining. Once the GPU supply issues were gone, mining returned to an equilibrium where it might be profitable on a variable unit basis, but you'll see a 1-2 year lag on earning back your investment (which historically has not been possible).

Basically, if your business model is to sell as you mine and there's not a shortage of mining equipment, you're likely not going to make a significant amount of money. However, if you mine and HODL on the off chance your cryptocurrency of choice moons, then all of these numbers are irrelevant. Imagine using a handful of cards to mine 1 BTC/day back in 2011 and 2012 and HODL'ing it until today... that's what everyone _wants_ to achieve.


Pocatello said:
What about the companies still in business here in May 2020 that offer co-location services along with the newest ASIC miners such as the Bitmain Antminer S19 Pro with a hash-rate of 110 TH/s and a power consumption of 3,250 watts?
Click to expand...

Based on your description, those are companies who are making money off selling tools to fools during a gold rush....


Pocatello said:
I read another thread here at [H] that few people at [H] use the ASICs to mine. Why is that?
Click to expand...

For some coins, GPU/CPUs are not fast enough to make any money. The ASICs are specifically made to hash specific algos and do it very well. CPU/GPUs have not been worth mining Bitcoin, Litecoin and others on similar algos since late 2013/early 2014 due to ASICs.
P

Sounds like mining is a poor way to obtain crypto coins.

Ponzi? online mining firms are a Ponzi scheme? Seems like something to avoid!