Hi guys, I'm back with another scratch build case project. Let's start with a bit of background info.

After my first scratch build, an Ikea compatible NAS case, I modded a Jonsbo UMX2 to fit a slim 280mm radiator and used it to house my current desktop system together with an EK custom loop. I was barely able to get the UMX2 before it was discontinued. It does have weaknesses, but I like it a lot. The succeeding model, the UMX4, fixes those issues, but IMHO they broke what was a good concept by changing the interior layout.

So when the hype before the launch of the first Ryzen was going on, I was planning on building a new system with it to replace my current delidded 3770K, and started looking for a a new case. After the release I opted to delay the upgrade until Zen2, as old Ivy paired with a GTX1070 was still going stronk. But now I'm back on the case project and want to get it done this winter.

First I looked at existing cases to buy. The main contender was the Hex Gear R40, which is beautiful, but in the end I found it too large for a case that doesn't fit a full ATX board and 420mm radiator. It did, however, inspire me to play with hexagon based patterns for my project.
What sparked me into attempting to create a metal case from scratch was seeing the construction technique used by Tymofar in his project Zero (pix are offline there, but available here), which uses extruded aluminium profiles (Bosch Rexroth) to construct the basic frame. It solves some of the difficult aspects of building a case. I opted for 30mm profiles instead of his 20mm, or HexGears 45mm, though.
While I also like compact cases (IMO Project Raw V2 and V3 are impressive), this was not going to be compact.

I decided on the following design goals:
- Must fit a full ATX board, a 420mm radiator and the remaining custom loop components.
- Maximum outer dimensions 55 x 44.5 x 23.5cm
- Must be convection friendly and blow hot air out of the case, not in, meaning radiator on top.
- Clean interior and exterior look, no front air intakes.

With these constraints set, I began exploring design options using SketchUp. The main inspiration for looks and layout is the UMX2, with the outer aluminium sheet bent around the frame. The project can be seen as an effort to scale up the UMX2 while making it much more watercooling friendly. 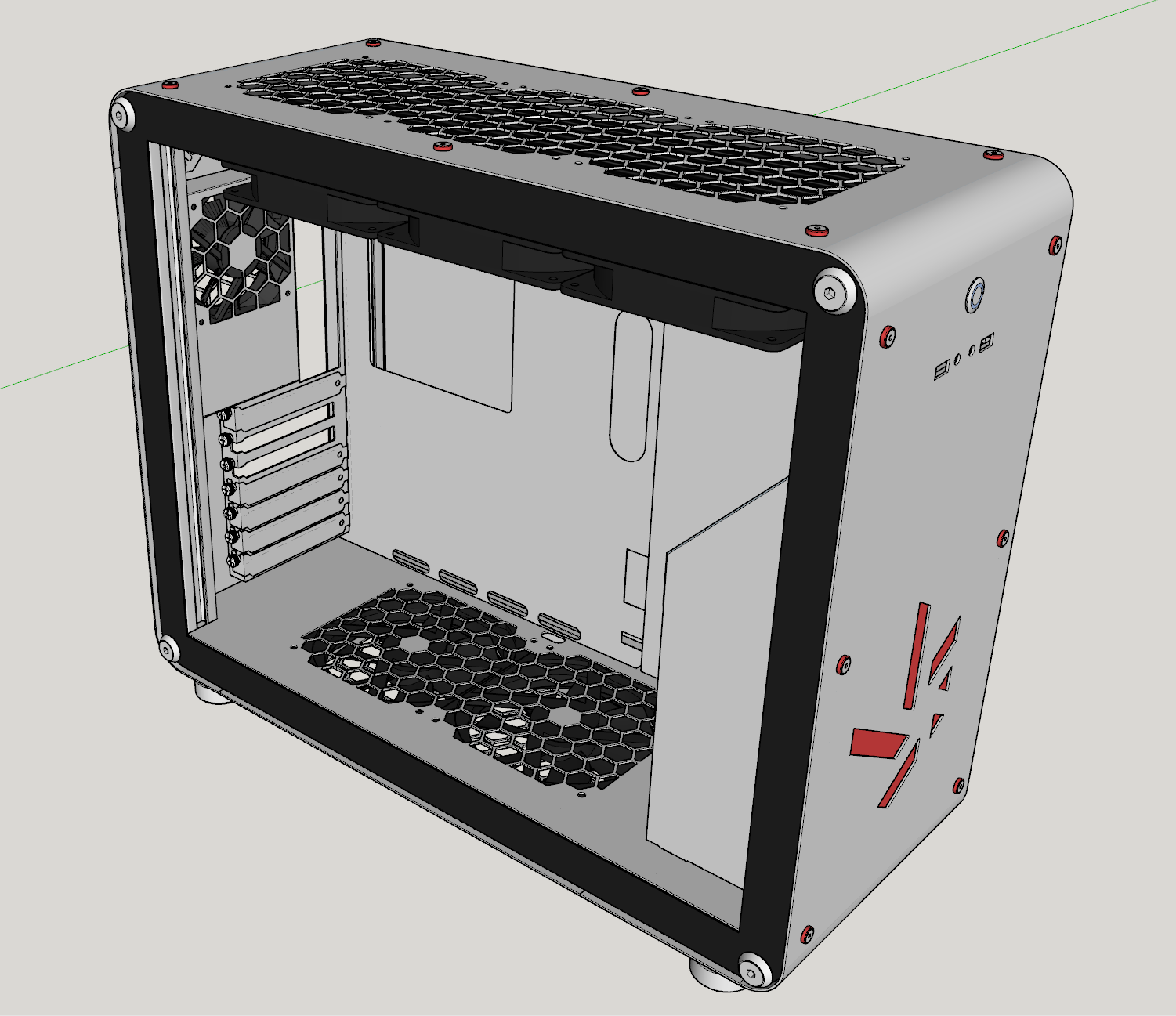 The model isn't fully finished, but it gives a pretty good idea of the final design. 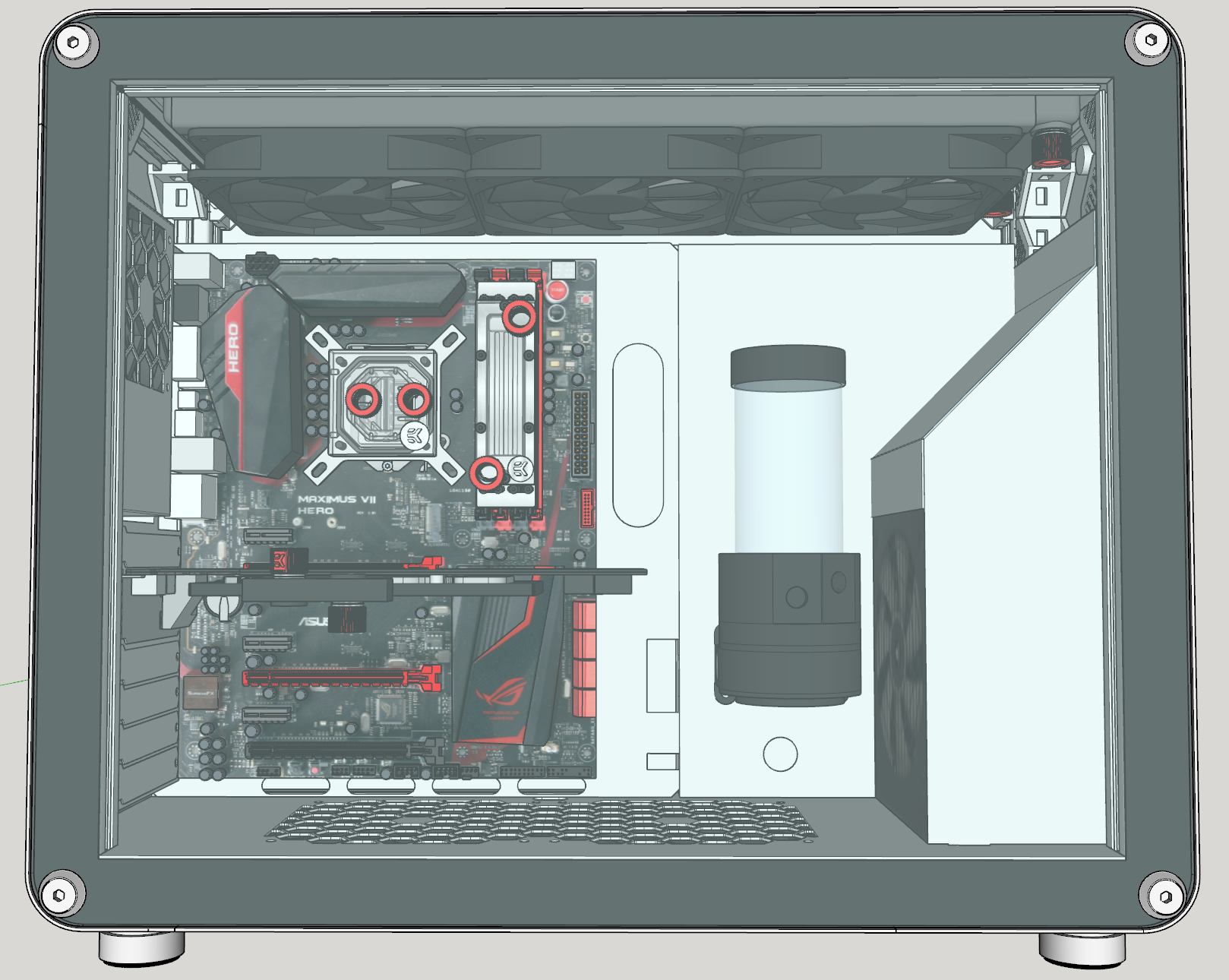 The outer aluminium sheet is 1.5mm thick and will have to be laser cut. Currently talking to laser shops. 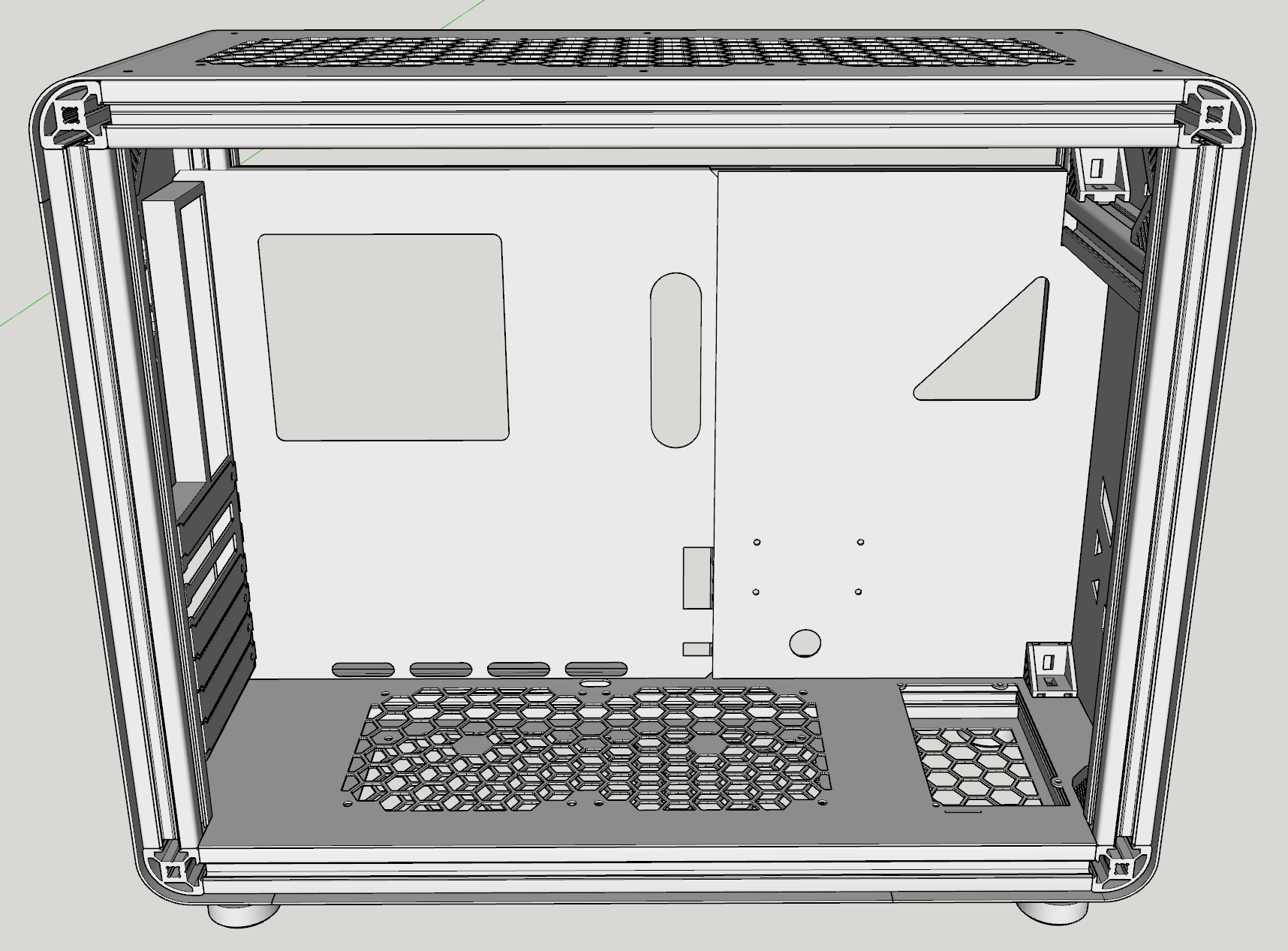 Bending the cut sheet around the frame could be tricky but I think I'll manage. 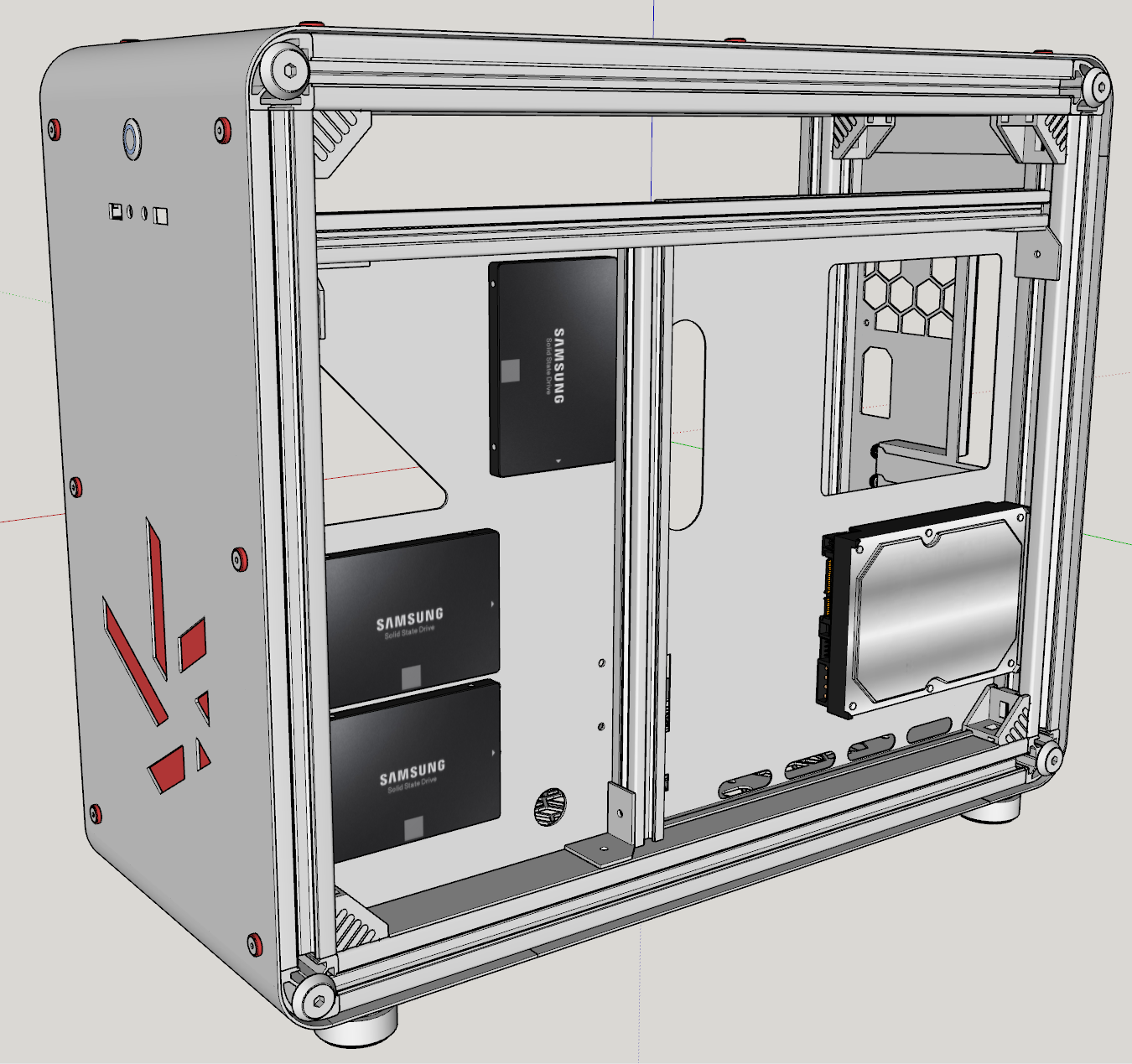 I haven't decided on the finish of the metal. I could have it blasted and anodized (if it's not too expensive), Apple style, or I could leave it raw, if I like it. 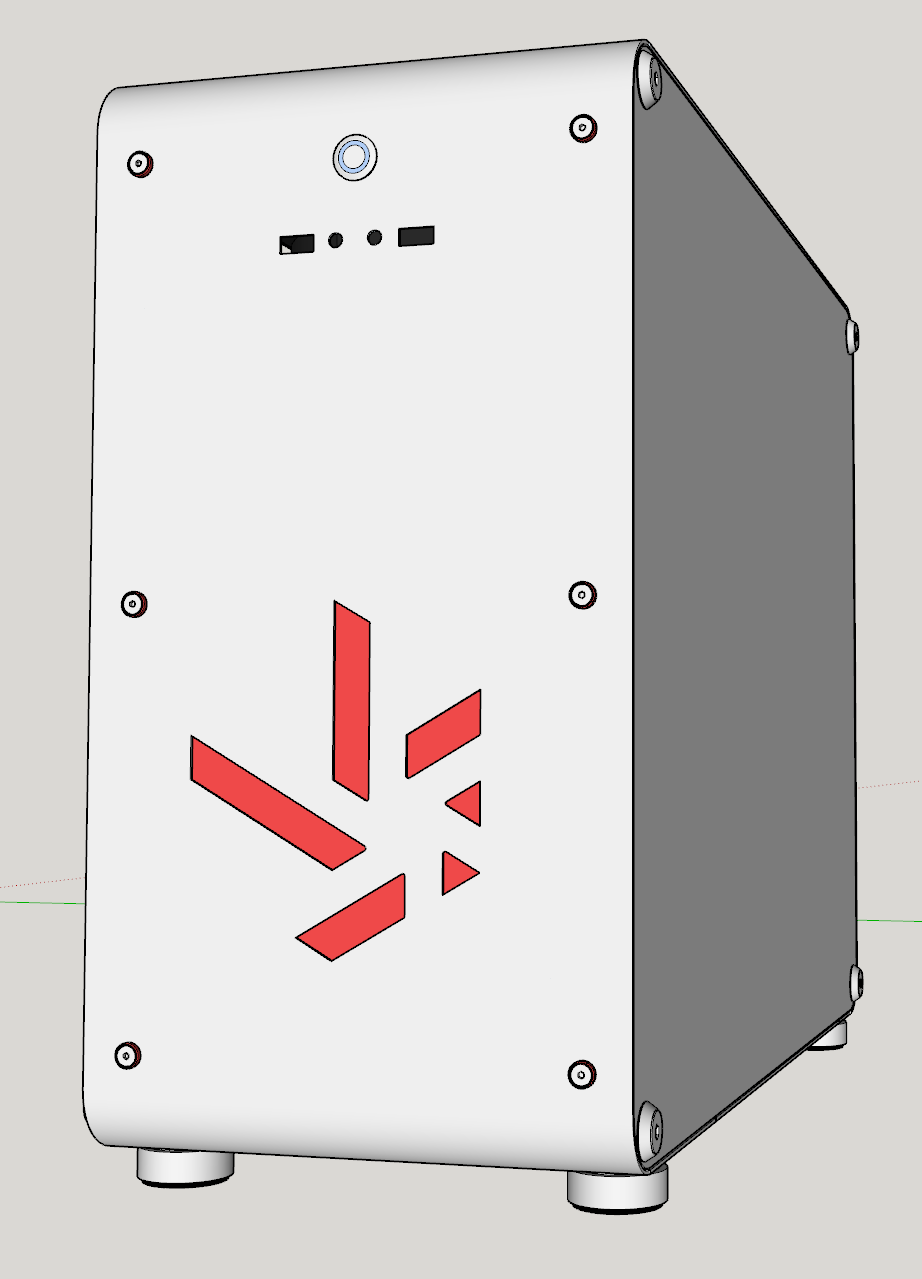 I already have the frame assembled and the mainboard tray (Lian Li PC60), as well as some other components (old mobo is just a placeholder). 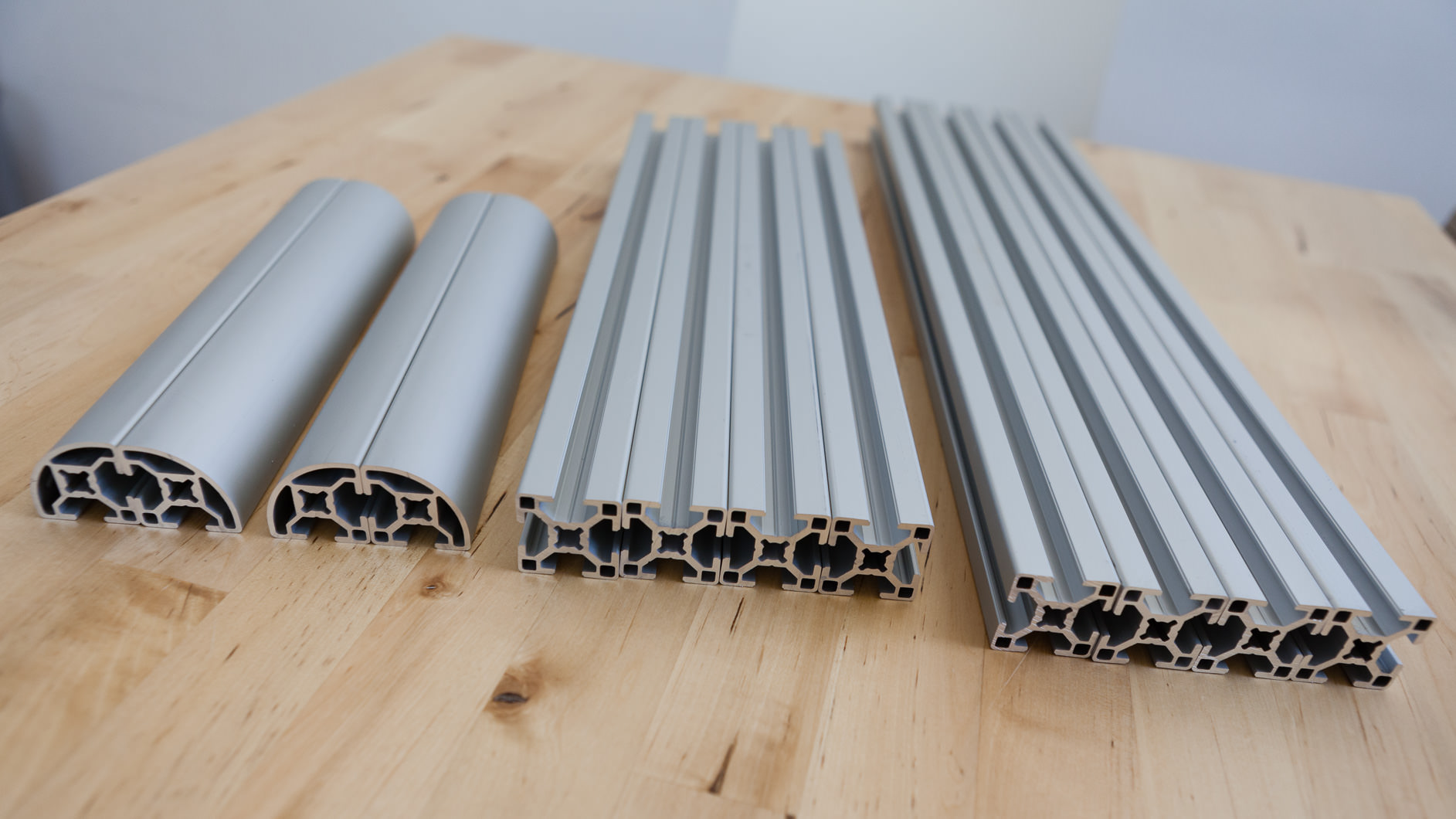 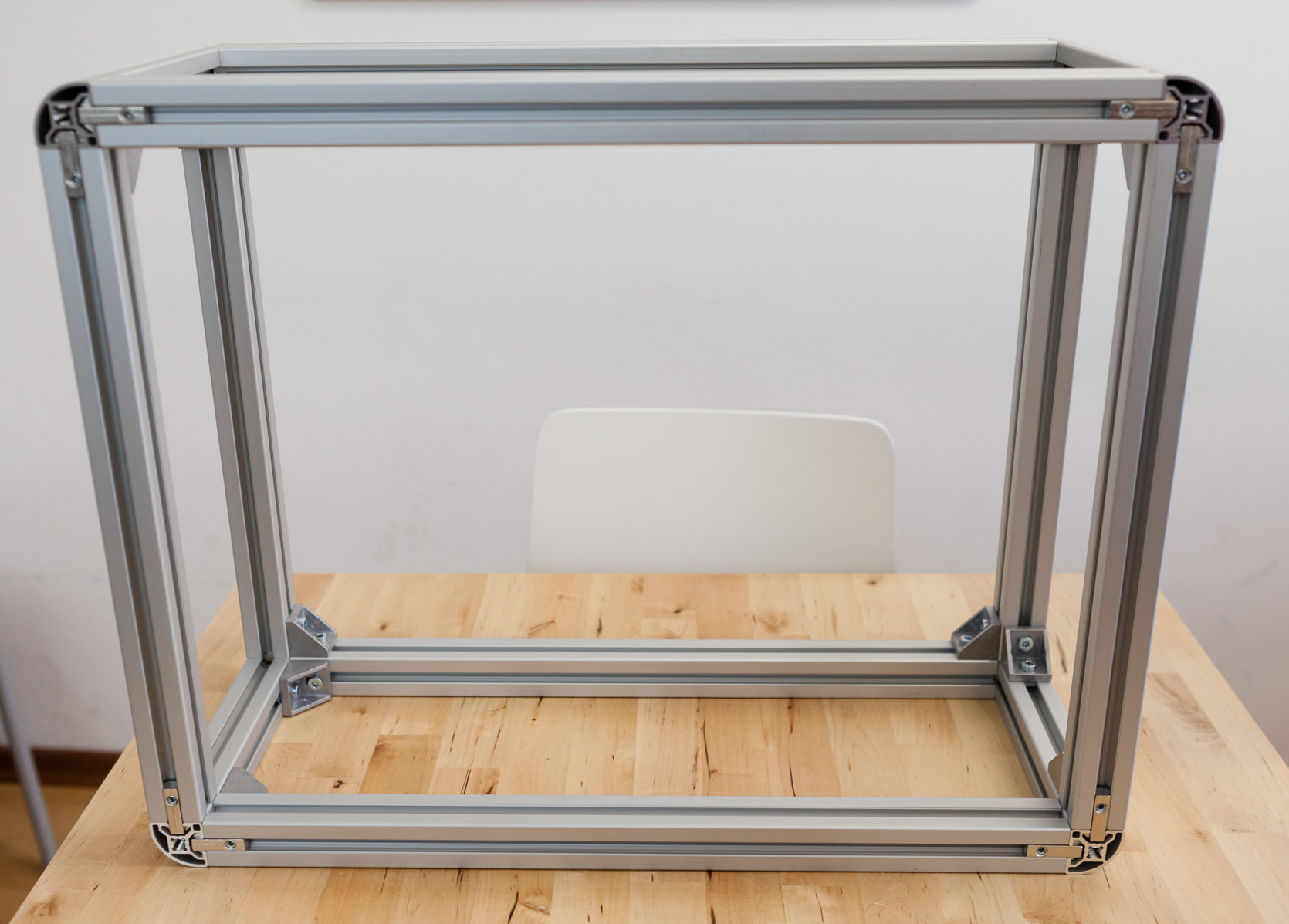 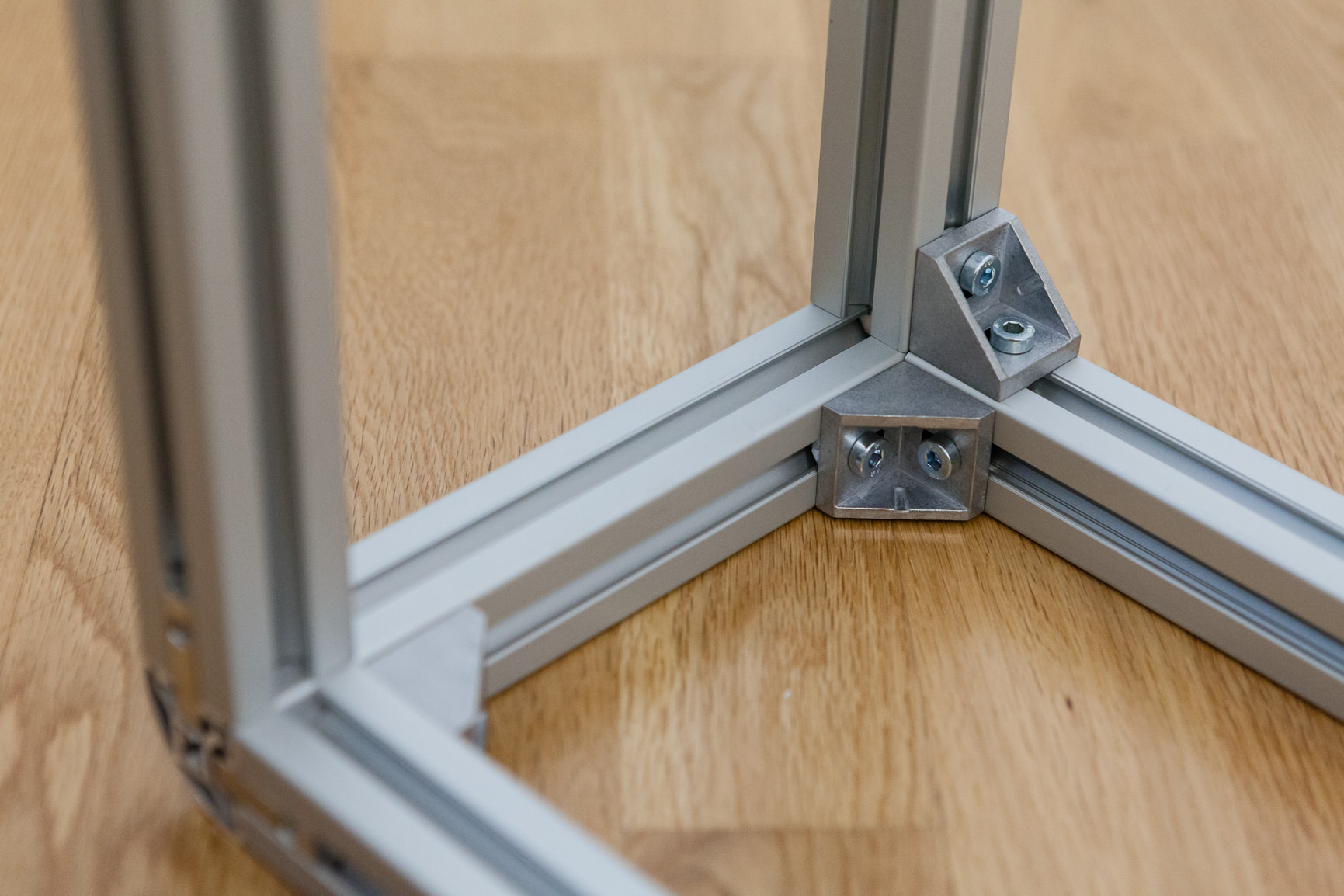 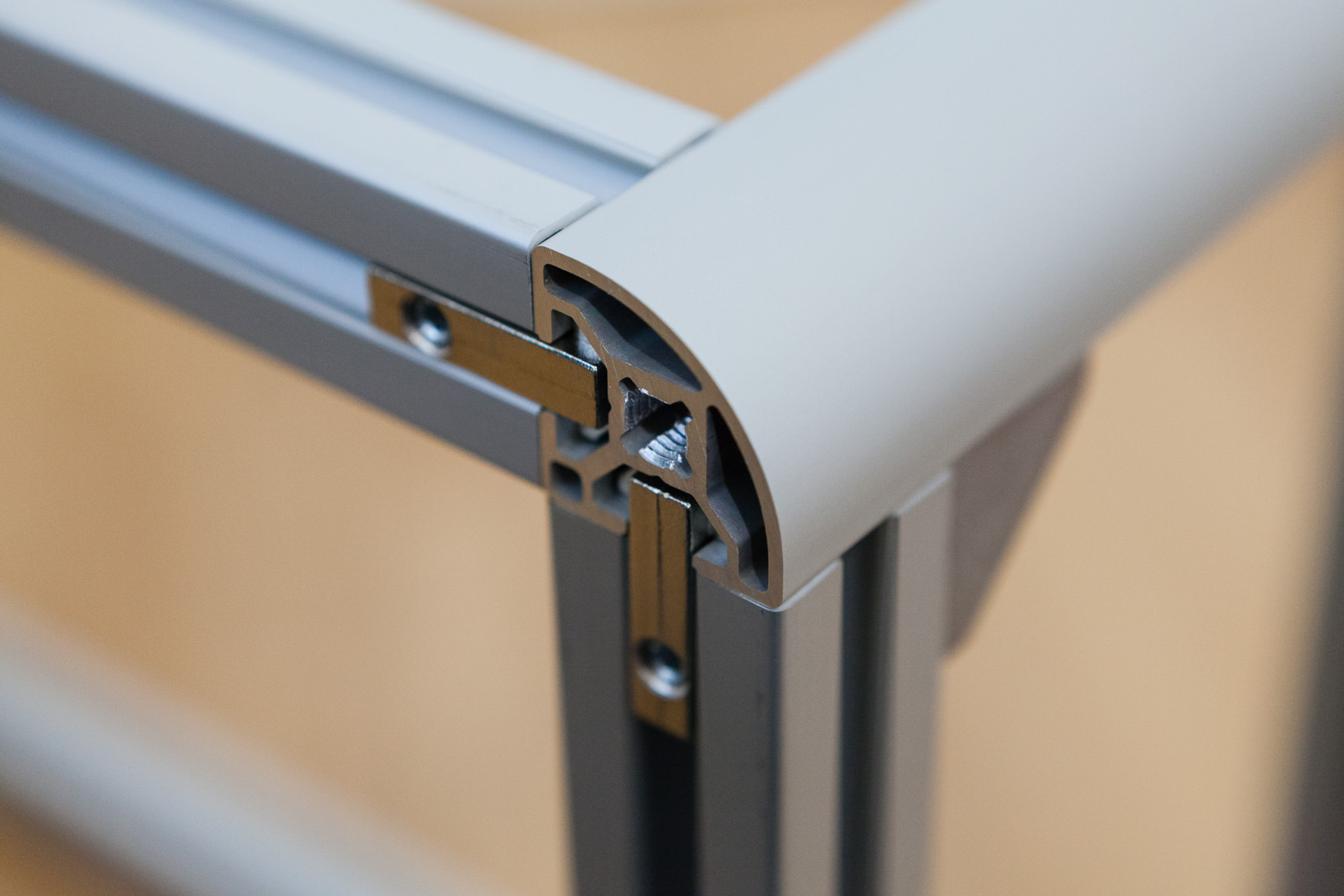 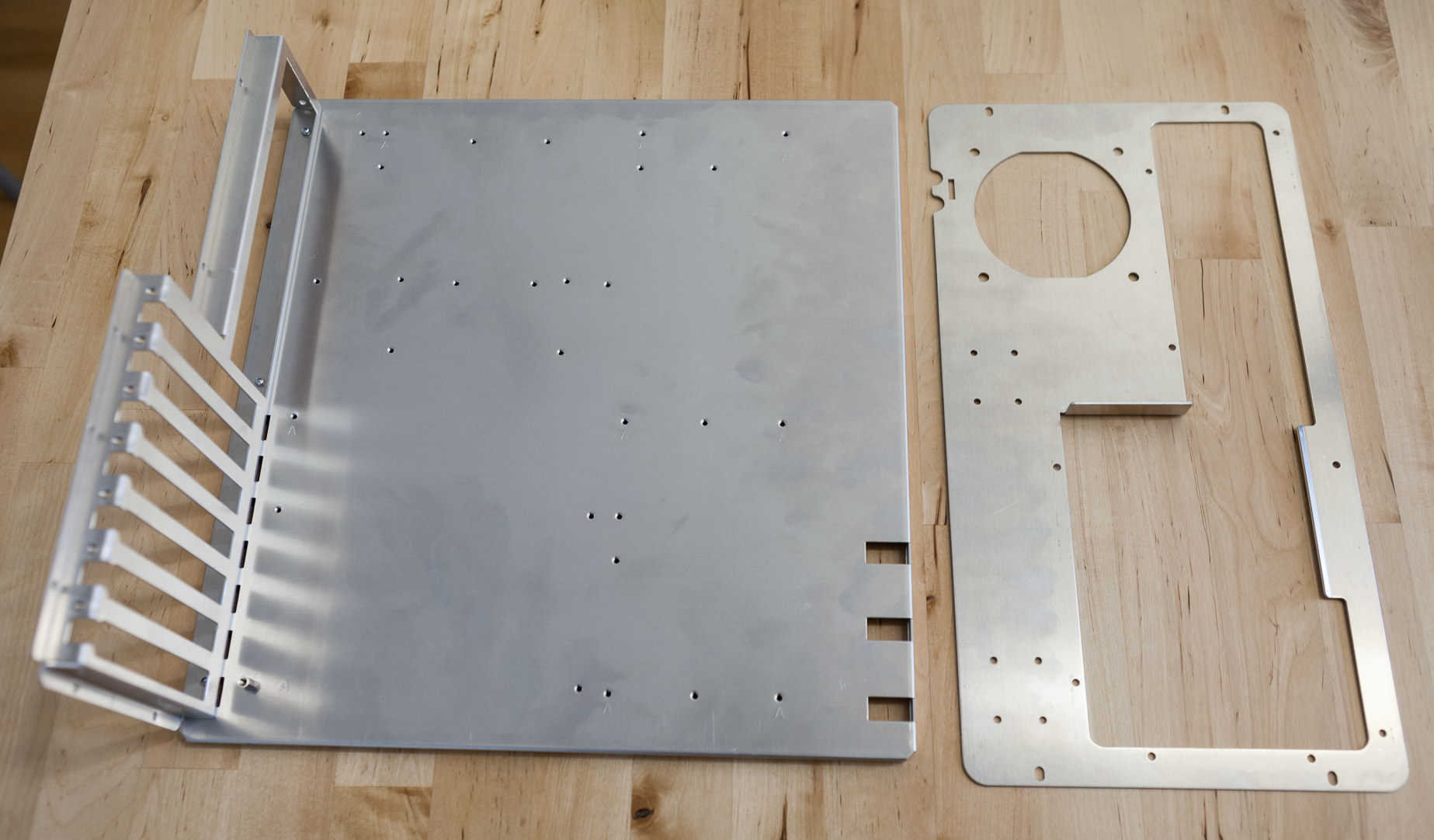 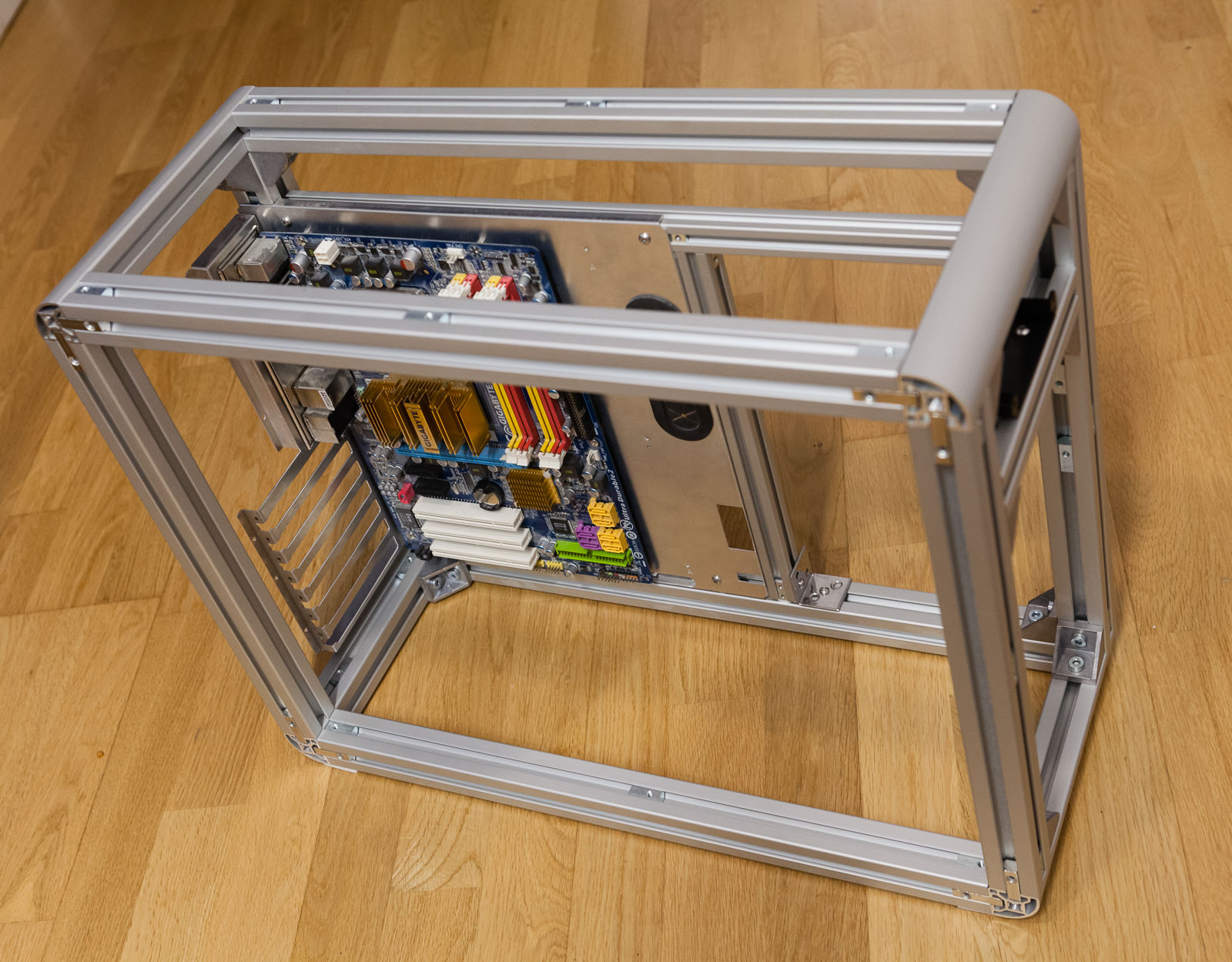 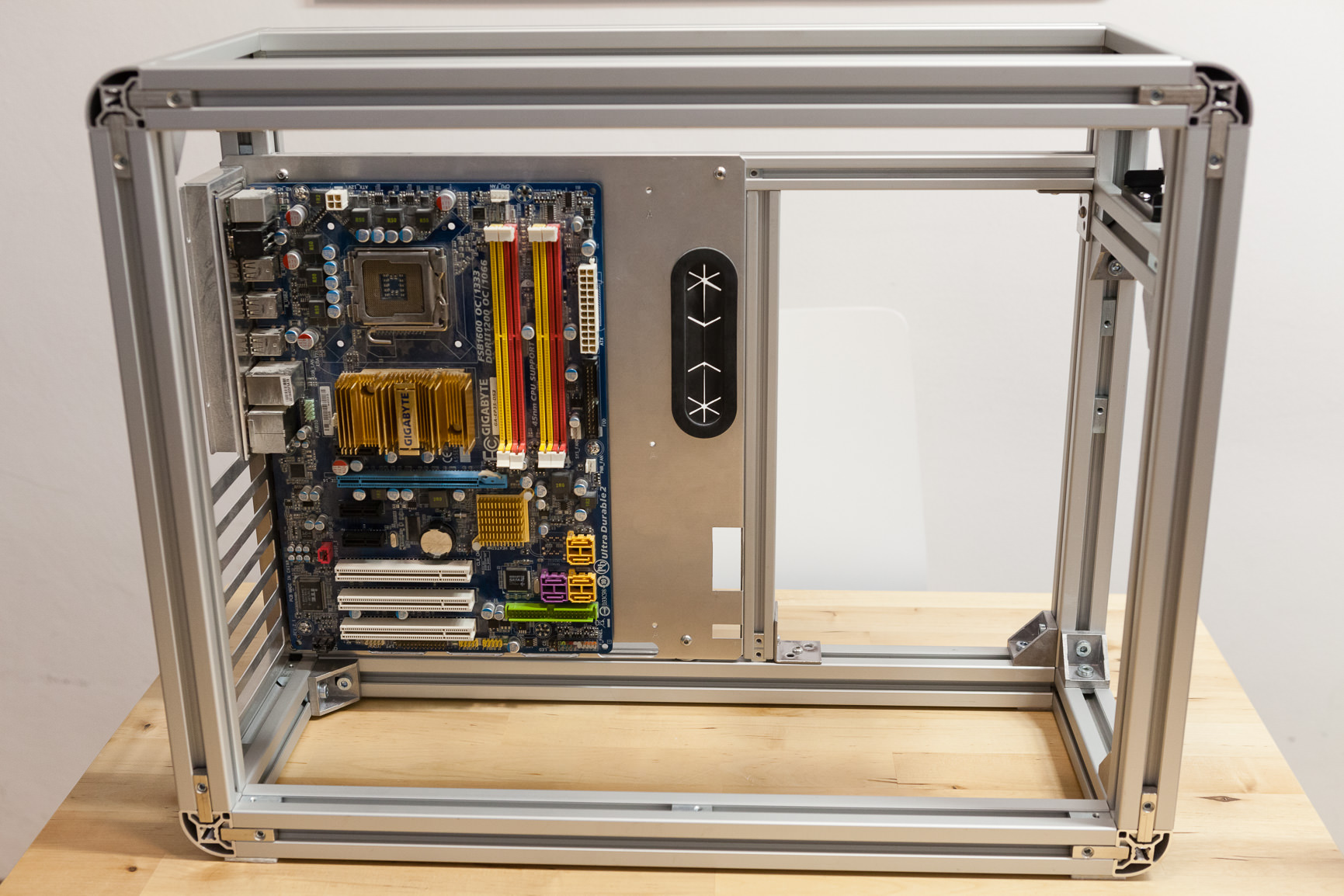 The next steps will be to finish the design and have the parts laser cut. I'll update this thread when there's news
Last edited: Sep 29, 2018
E

Very nice! I love the use of the extruded aluminum.
Z 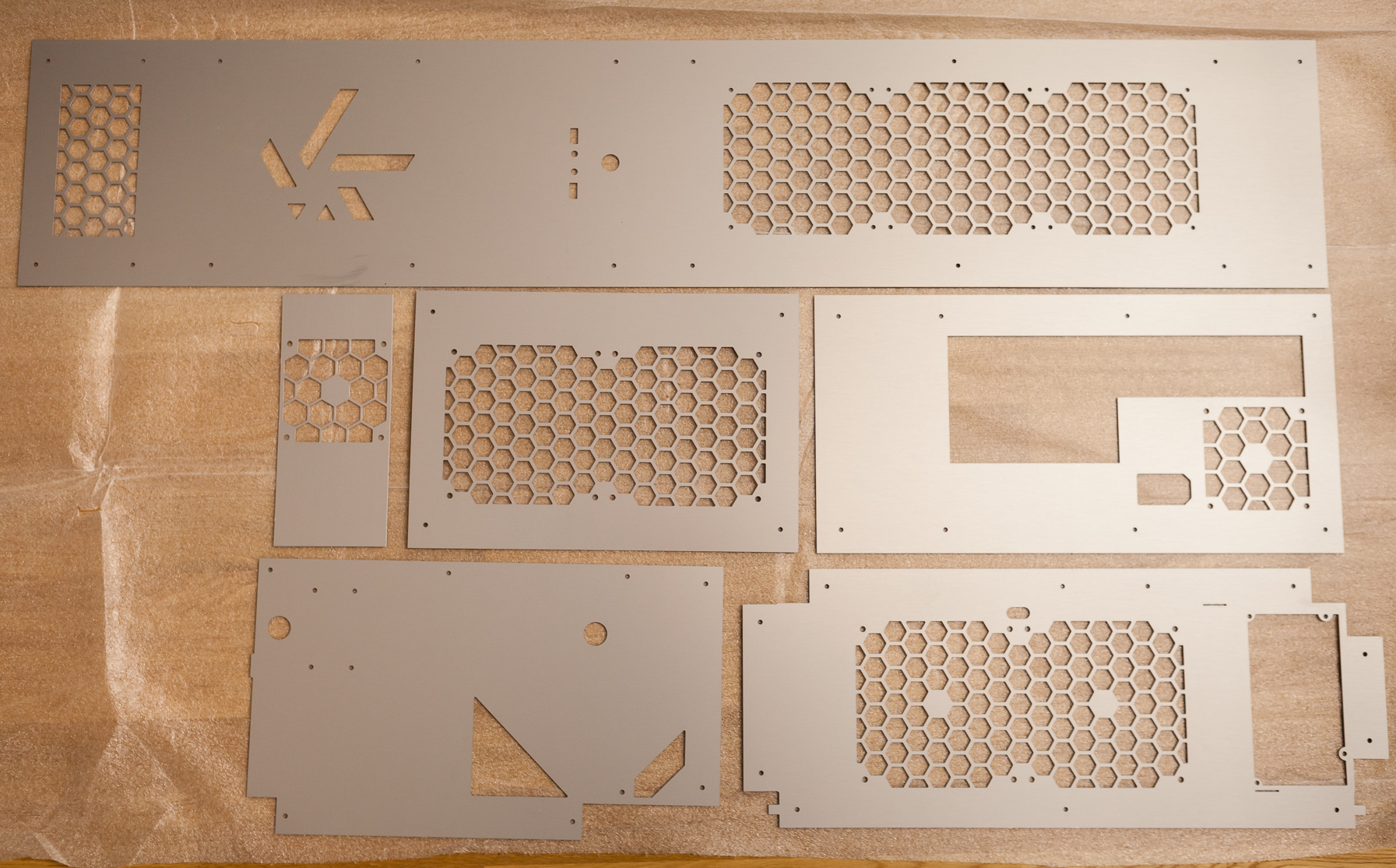 As you can see the project finally moved forward.
A lot of work went into refining the details of the design, then transferring everything (manually) from SketchUp to LibreCAD as I needed everything as DXF files and the DXF exporter plugin for SketchUp is not really up to the task, especially since it wont handle flattening of a 3D model.
I contacted a number of laser cutting shops for quotes. Interestingly the prices varied a lot, the main difference being that the most expensive ones listed "programming" as a large position in the quote while the cheaper ones didn't. It seems to me that automation (or lack thereof) is a key factor here. The most competitive offer also allowed me to have the parts anodized, which produced a very nice mat finish, but which caused an issues with bending, as I later found out.
Bending the parts around the frame was tricky with just basic tools, but I managed to get an acceptable result. Having cutouts directly after the bending section creates issues as you have to apply a lot of force onto a very small area, otherwise you end up bending something that should stay flat. Another issue is that the anodized surface dislikes being bent, creating micro-fractures at the bend that reflect light differently. Ideally, anodizing would have happened after bending, but I didn't foresee that.
The main issue I had, though, was that for some reason I screwed up the math on the length of the round bends, ending with around 7mm too much length per bend. Luckily, some leeway had been integrated into the design meaning everything was shifted along the outside of the case, and I just had to cut of excess at the end of some of the sheets.
I also drilled additional holes in the parts to better screw them down and reduce the possibility of rattling/vibrating. 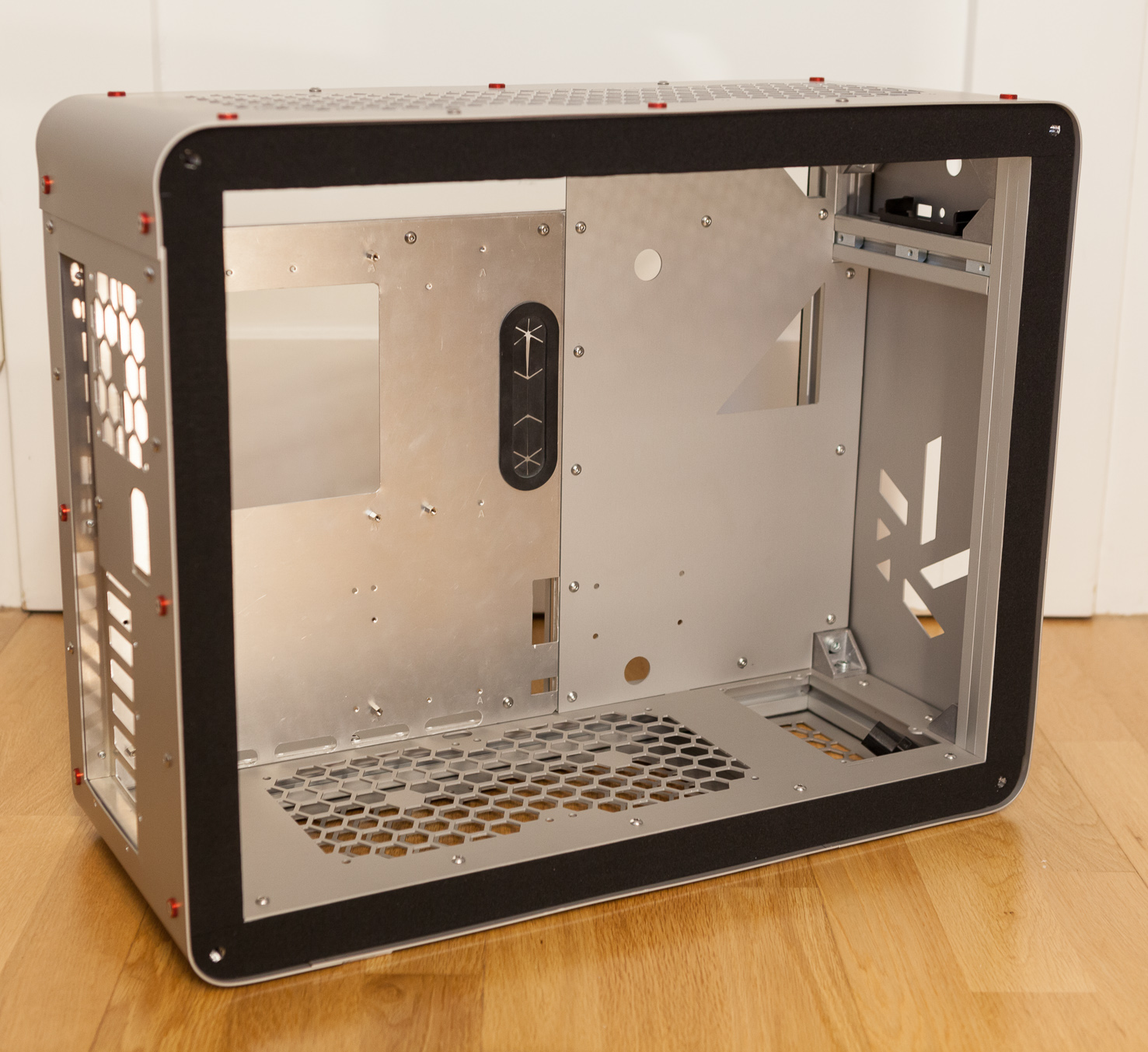 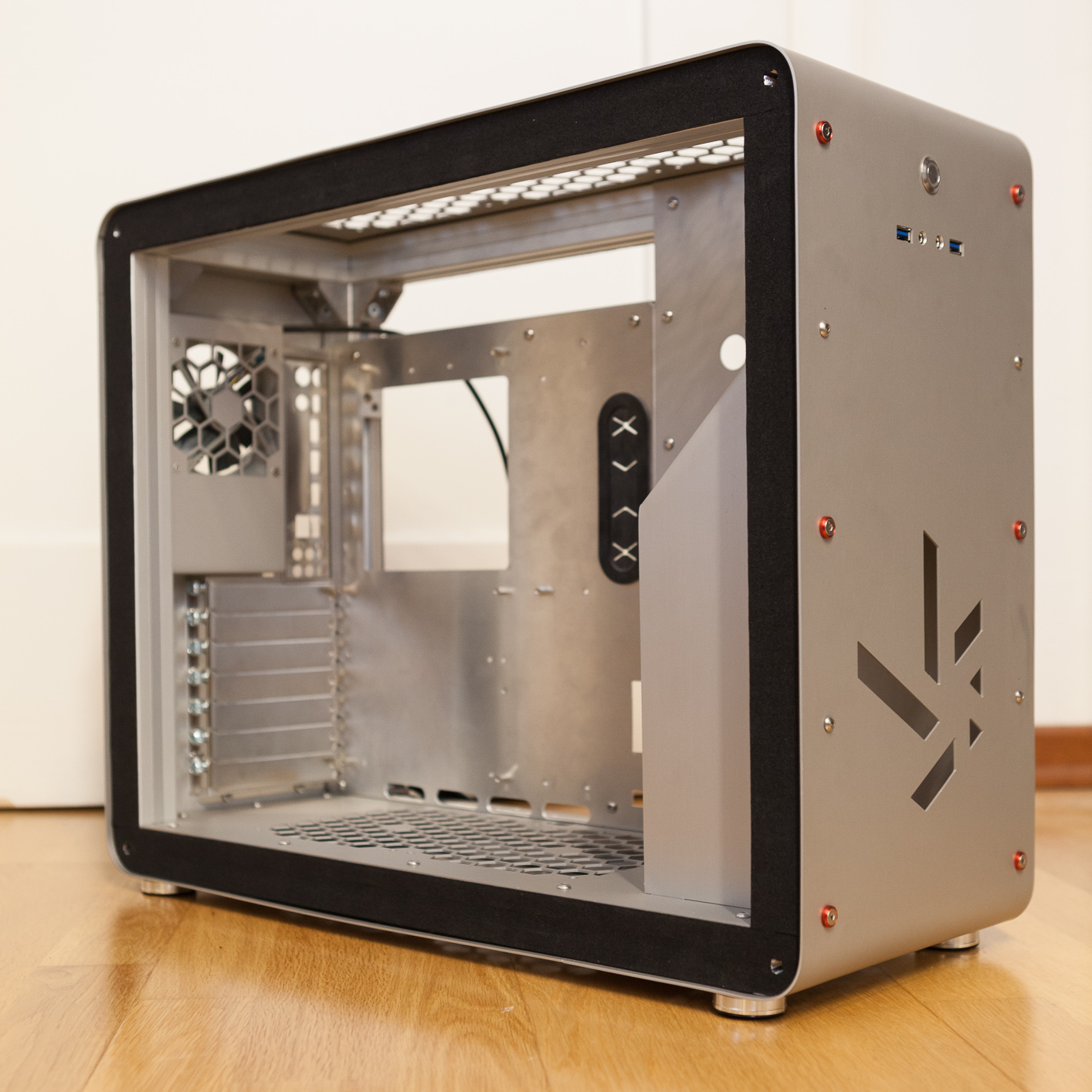 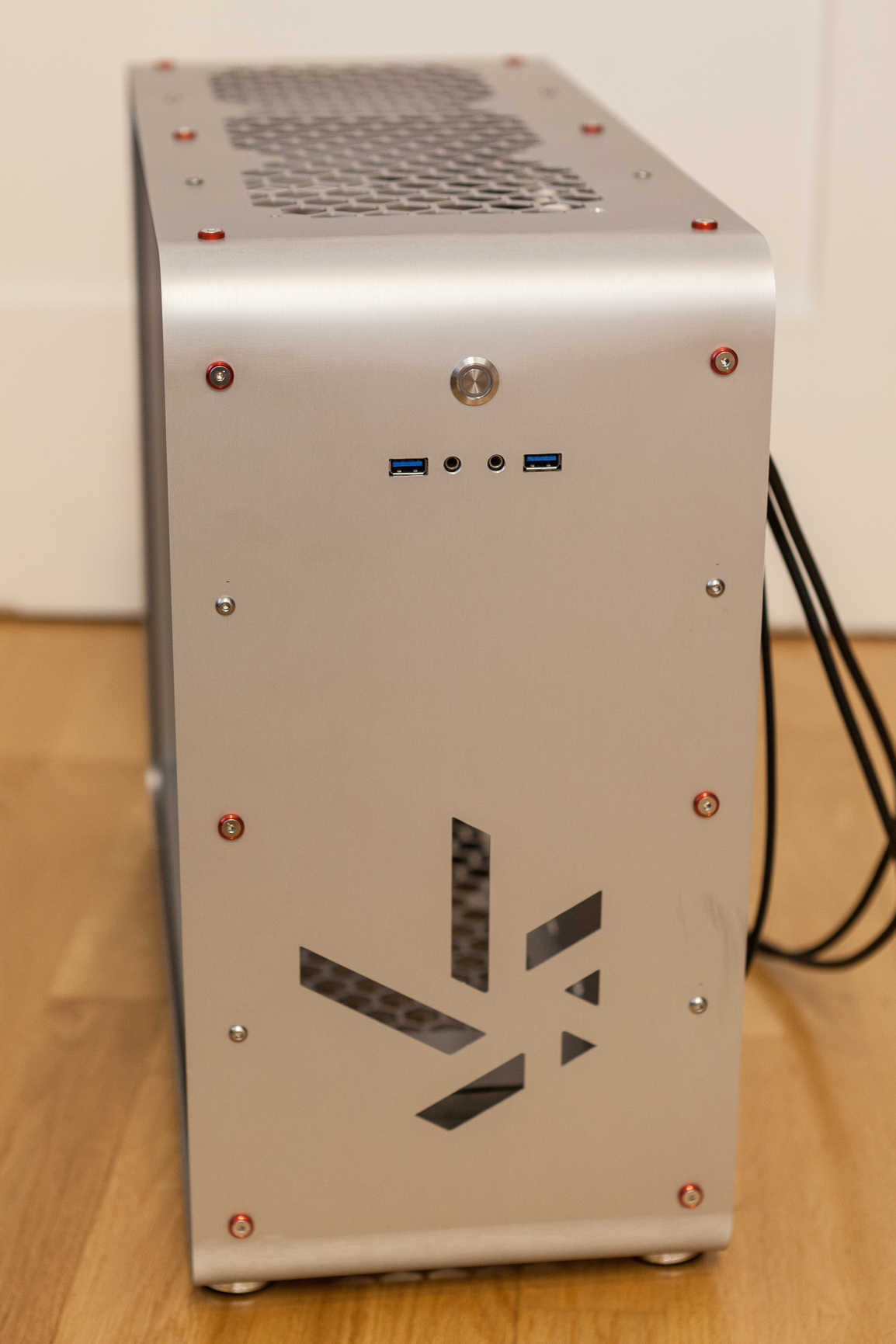 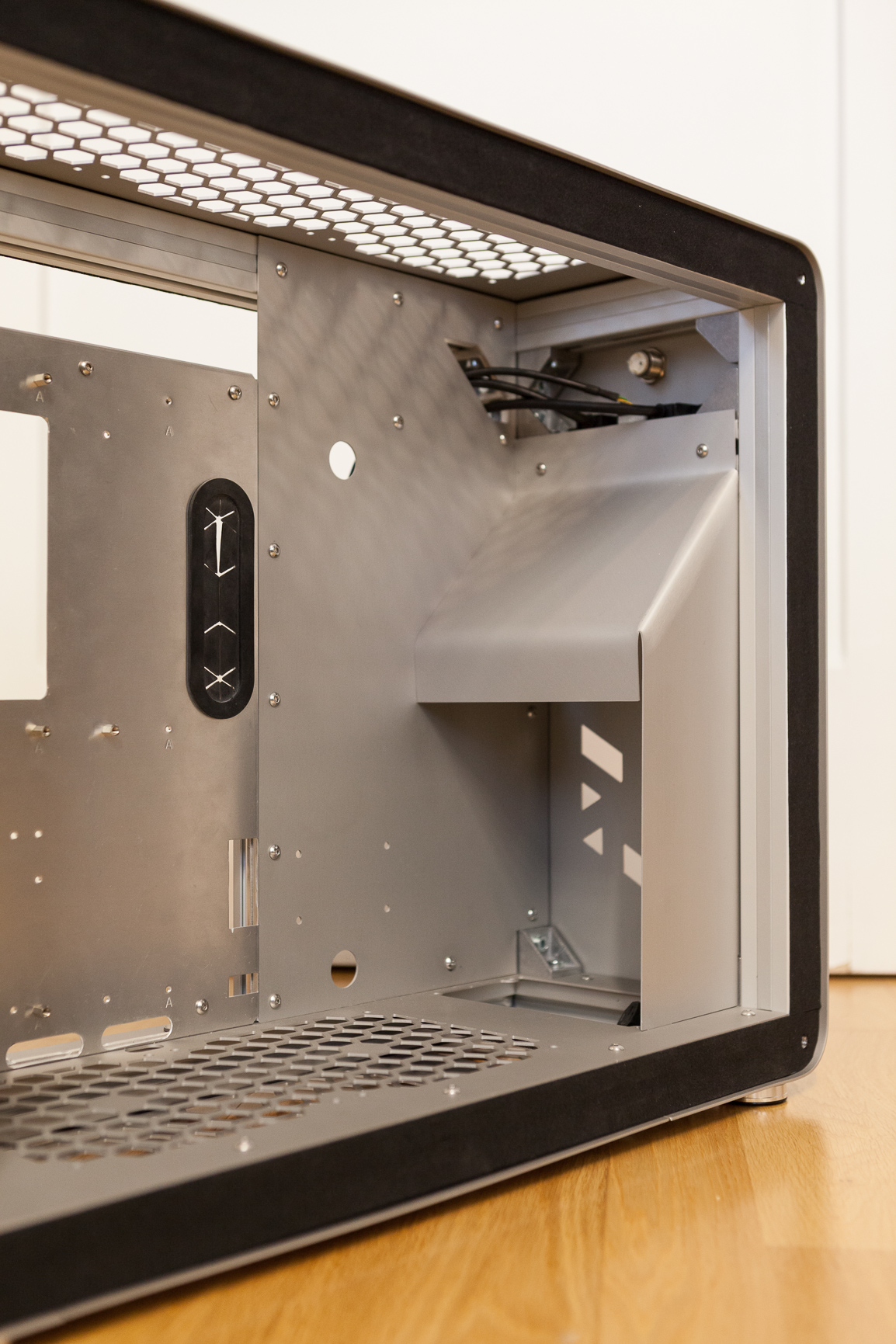 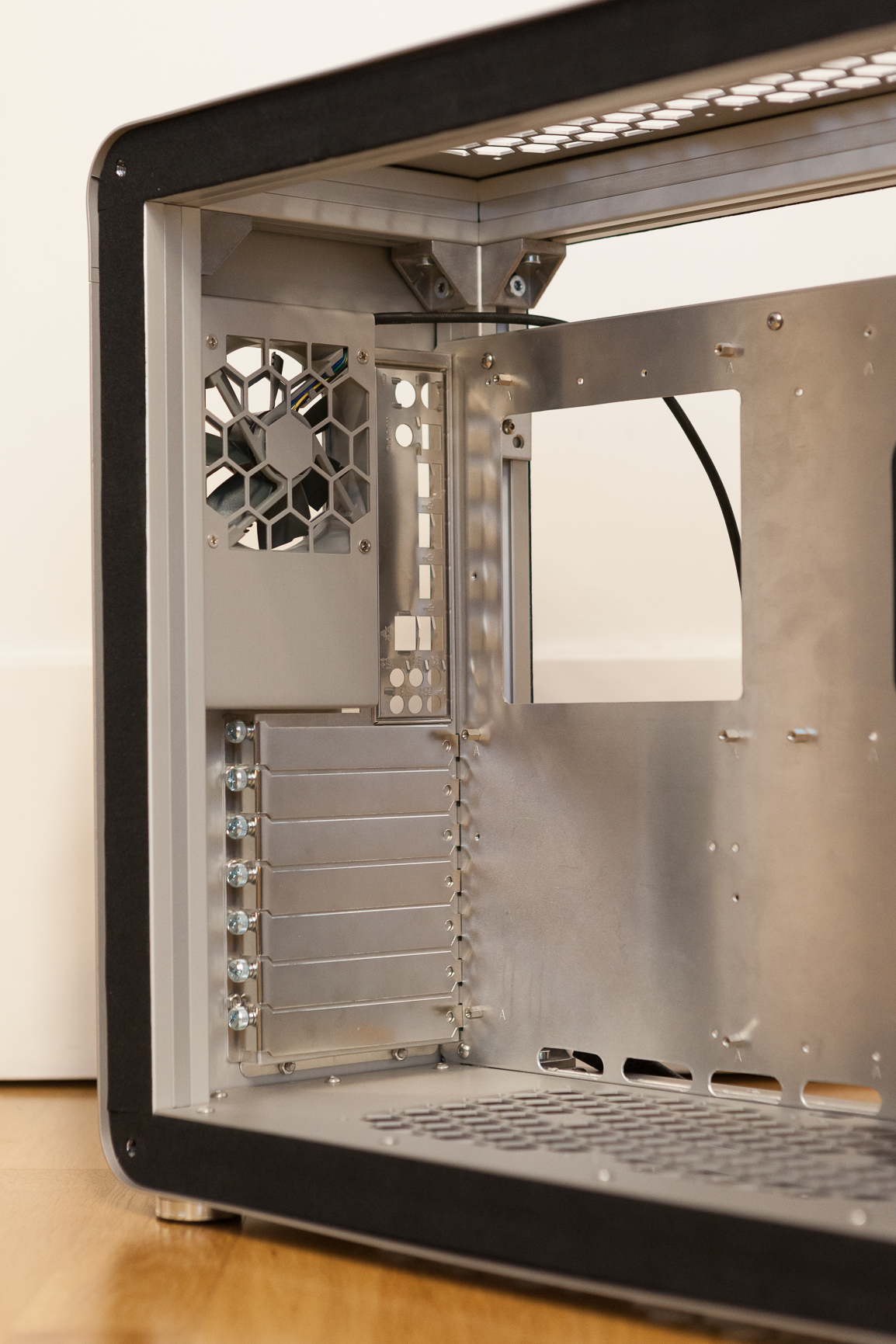 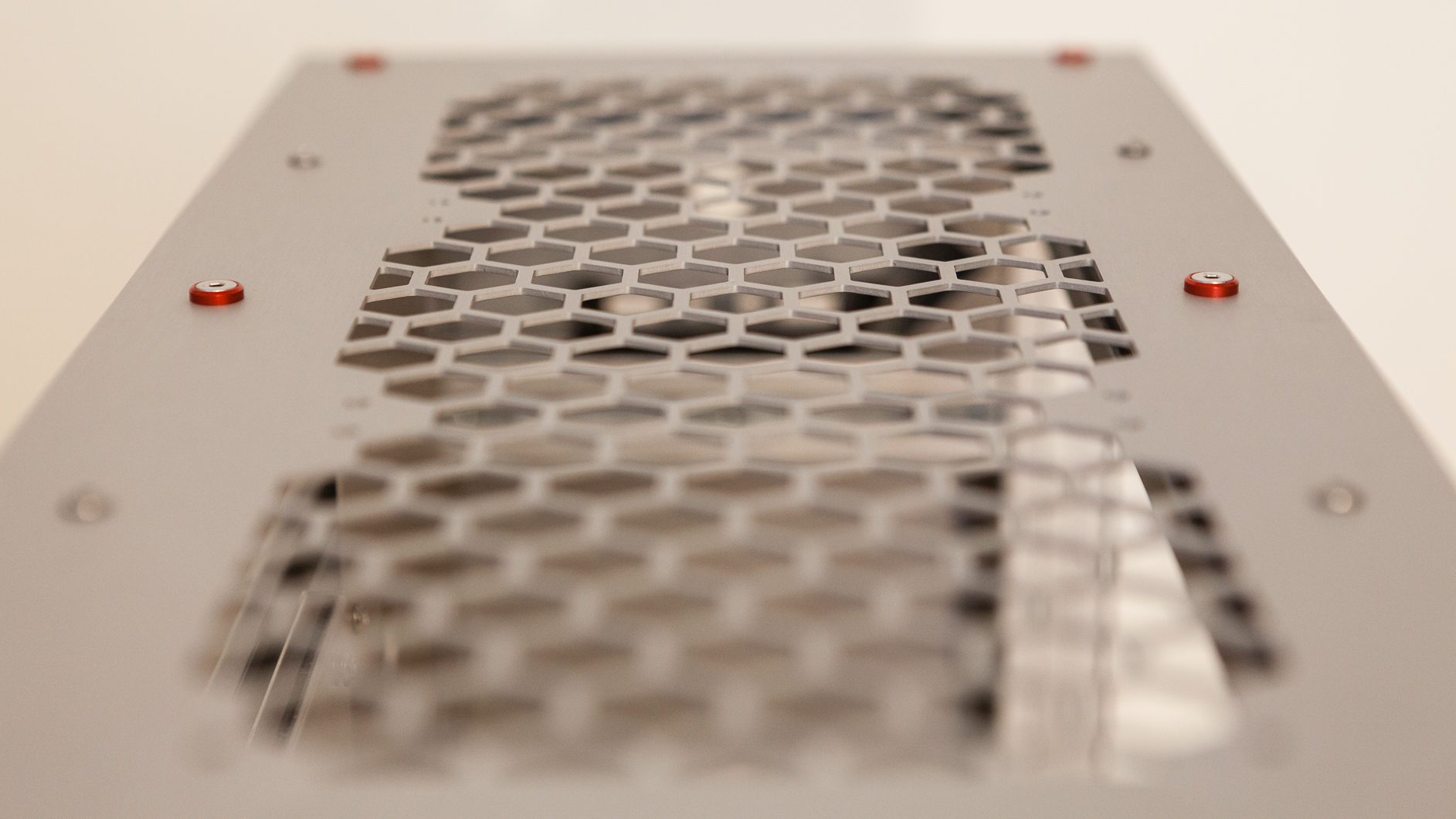 Pretty amazing man. Whatever ended up happening with your Ikea case, is it still in service or was it replace with a traditional rackmount chassis?
Z

Thx!
The Ikea case is still in use, with occasional disk upgrades (currently 6x10TB data disk + 2x1TB metadata/small block SSD). But I am in fact starting to think about making a new NAS case with the same basic layout, but in metal (alu). A rack would be nice, but is just not feasible atm.
Z 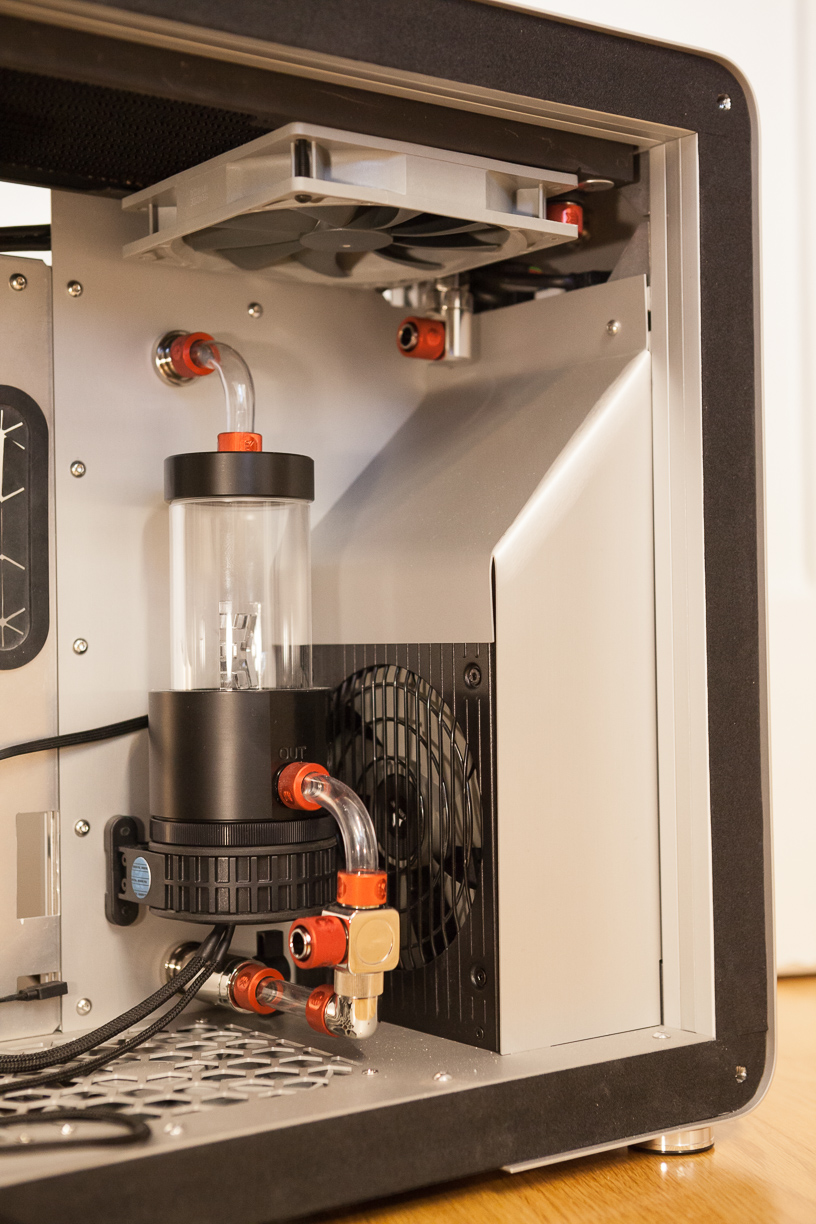 I keep forgetting to take pictures, sorry about that.
Anyway, as you can see I'm in the final stages of installing the system components. The graphics card is a placeholder until I can install my current watercooled 1070GTX, just waiting for some ordered EK fittings to arrive. That card is also just temporary, as I intend to upgrade to some beefy nVidia Ampere GPU once they are launched. 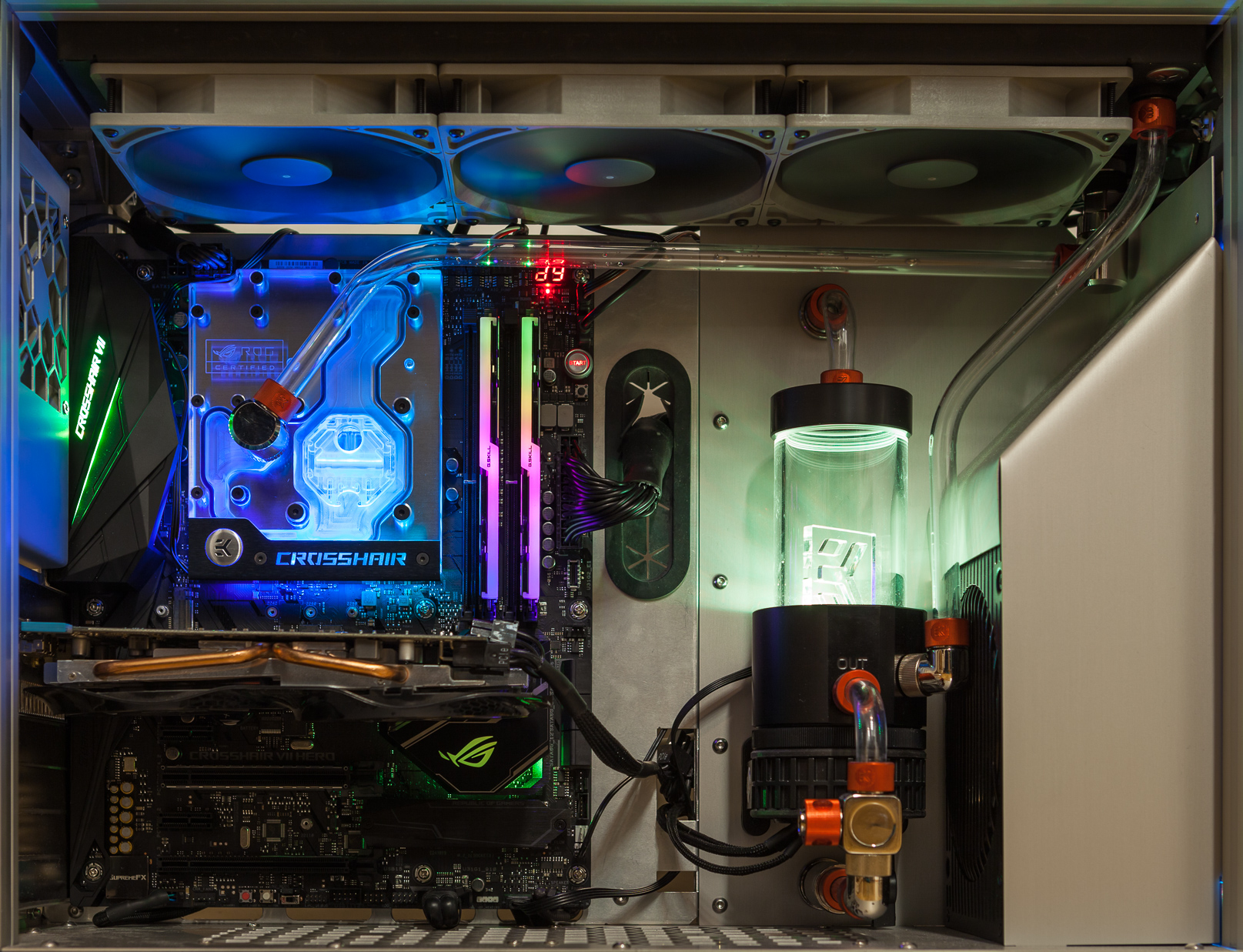 Finally I completed the loop: 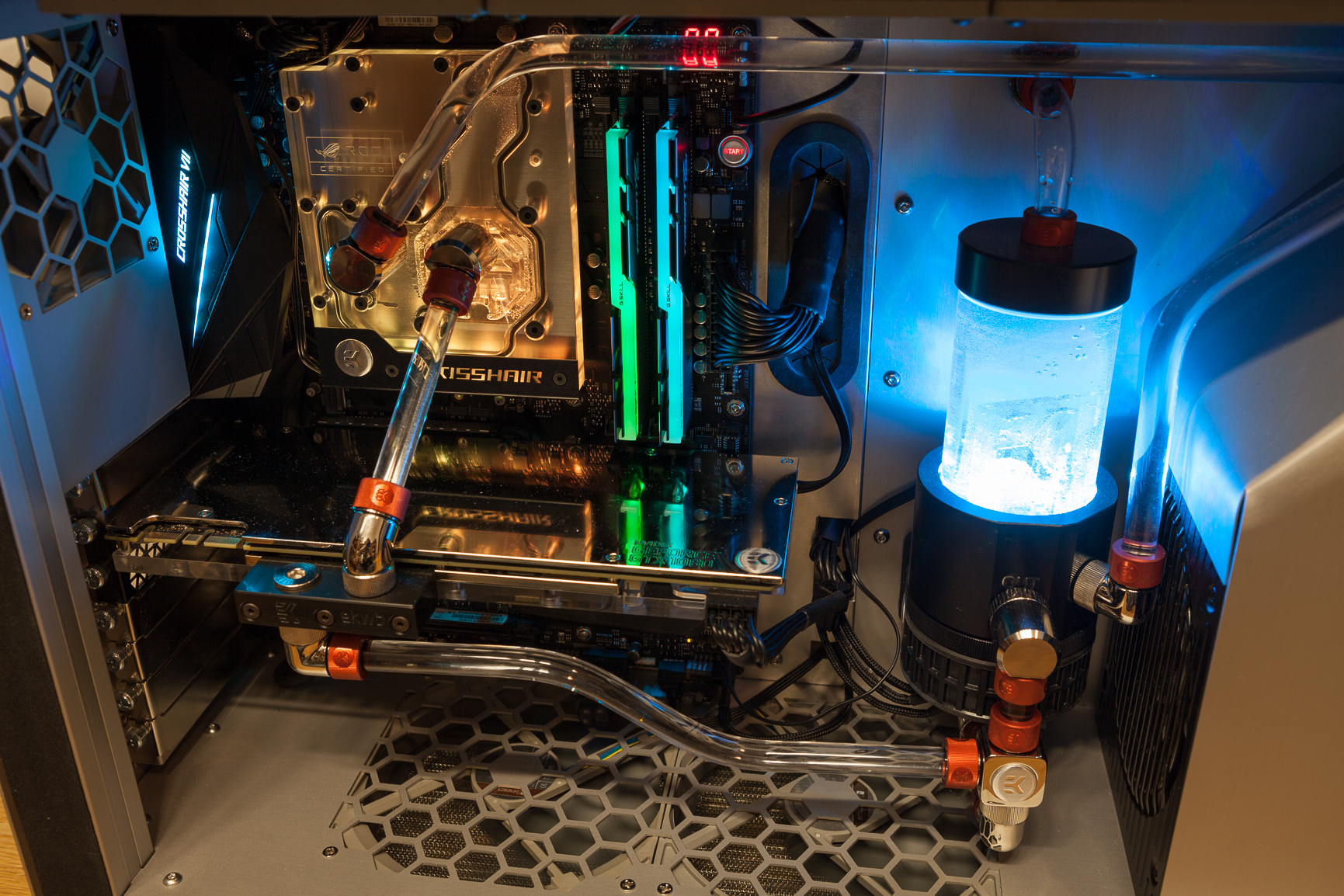 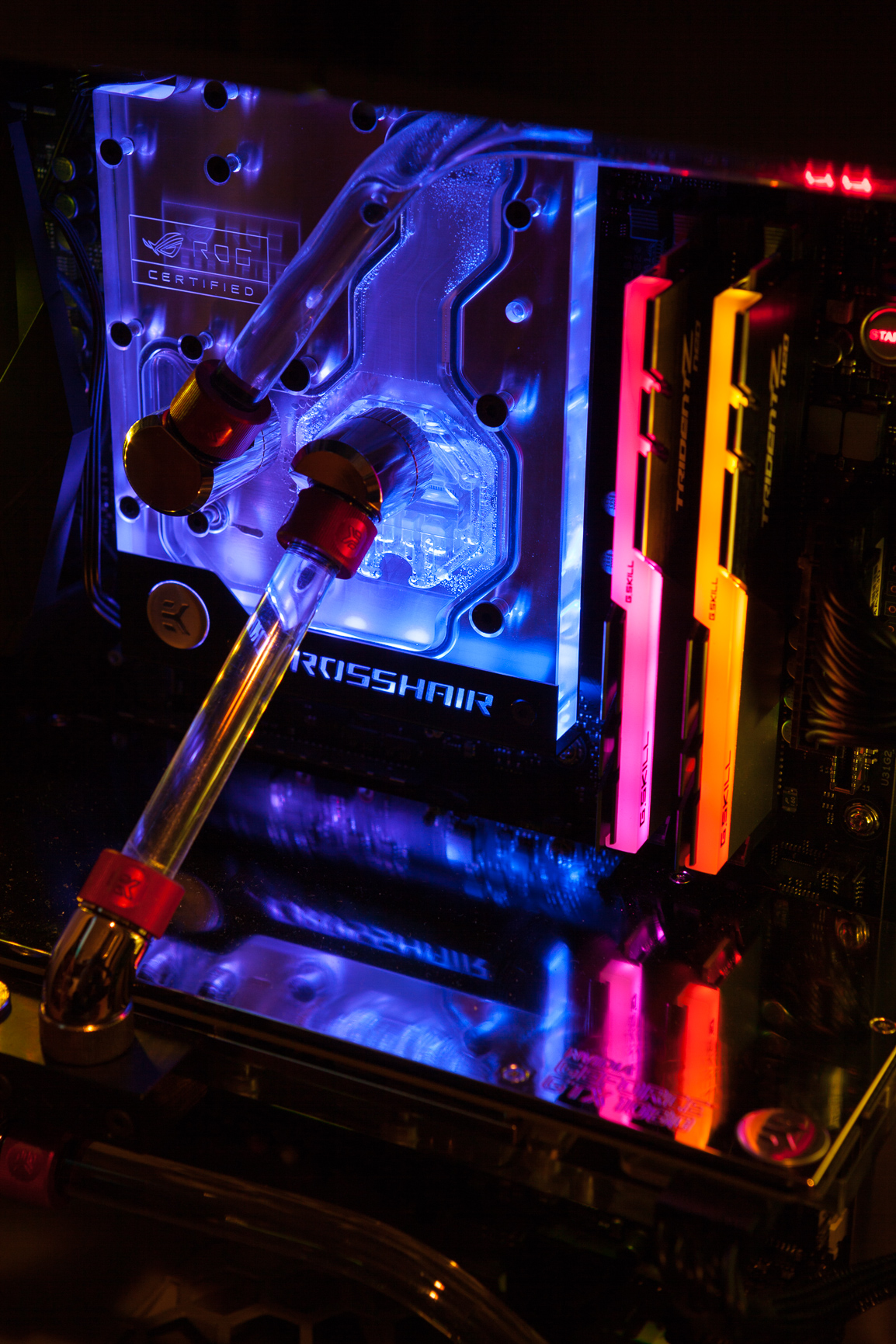 I'm not too happy about the power cables, might look into sleeved cables.

And a shot showing the back cover: 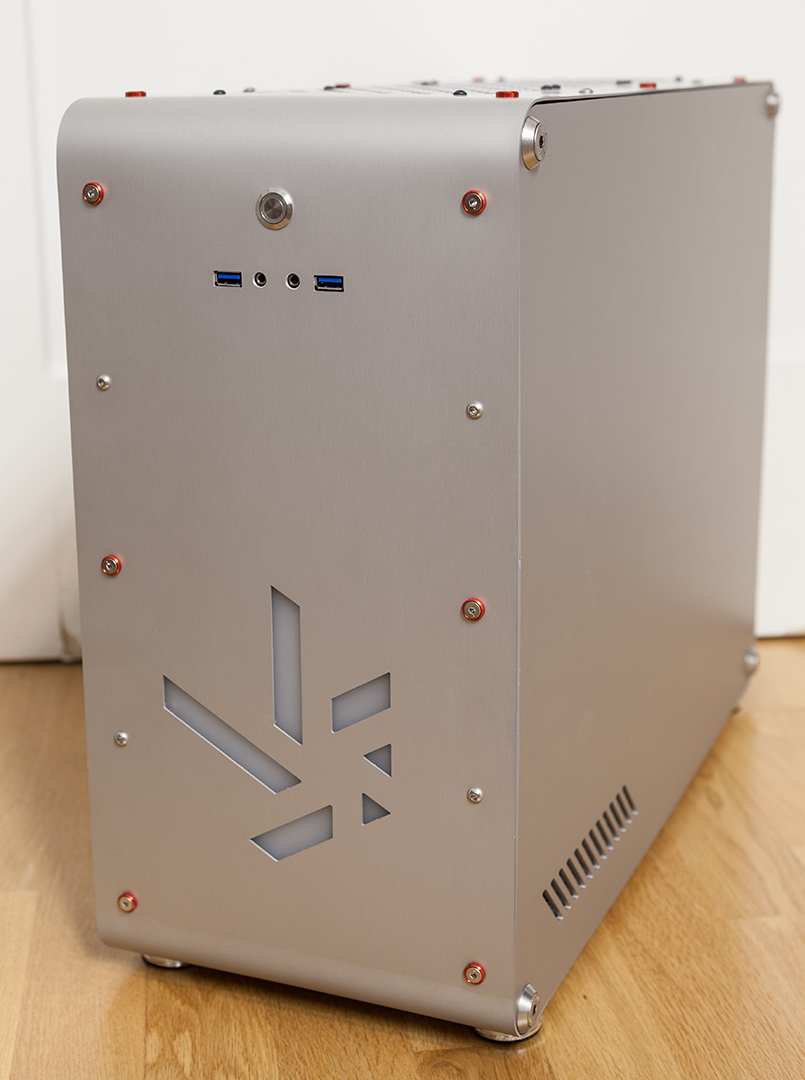 Apart from the upcoming GPU upgrade and some smaller things the project is mostly complete and I'm transitioning from my trusty old Ivy Bridge to this system. I'm generally happy with how it turned out. The required amount of work and money put into the project was certainly much higher than anticipated (it's anything but cost effective!), although there were no major roadblocks, only lots of little issues that I managed to work around or at least minimize.

There's certainly a large number of things that I'd change if I'd do a version 2.0 of this case.
Without changing the layout and looks I'd name lots of cut/hole positioning fixes/changes and making the outer bent alu sheet from a single piece. Going a bit further I'd make a custom mainboard tray instead of adapting one from Lian Li as I did, as I shied away from the precision required and not knowing how to make the extension slots. I now have an idea how to do this. Having a single custom piece tray would free up the backside from the 20mm support profiles, allow to reduce the length of the case a bit, apart from being prettier.

But there are other ideas as well. Departing from the current case look, I'd ditch the bent sheet construction, which looks nice, but causes problems for anyone without dedicated/professional sheet bending tools. There's precision issues as a bend never consumes exactly the same length of sheet, shifting all other elements in one direction or the other. Due to flexibility, the sheet bends have tension away from their 90 degree angle, causing some warp due to limited options to screwing down the middle section, especially if there's a hole directly after a bend. And finally 1.5mm sheets are about the maximum thickness I could manage to bend with an improvised setup, although I'd like to have used thicker sheets for stability, especially the delicate fan cutouts. Also anodized aluminum and bending don't mix well.
Going even further, one could look into the option of removing most/all of the extruded alu profile structure, going with soldered joints instead. This could save a ton of space in every dimension, producing a much smaller case while still allowing for the same interior layout with a 420 radiator on top...