MinPins said:
I do believe there is a singing fish on your wall.
Click to expand...

Haha those are great.

Need to configure that so if any equipment goes into alarm, it is triggered.

Something about seeing so many stacked switches and all those ports that gets my geek boner up. So many ports....
T

Cypher- said:
So one of my friends was working for a company and they decided to close his building down. Since he was doing the stockroom / logistics he was one of the remaining people to get everything out and make sure the building was empty for the last day. For about a month I was going up there every weekend and picking out stuff that was going to be thrown away. Most of it wasn't computer related (wire racks, storage cabinets etc.) My first IT related score was a APC Netshelter 42U rack. Unfortunately almost everything else in the data center was off limits. Even though I knew this I kept bugging him to get me some stuff.

Finally on his last day I get a phone call that I wasn't expecting telling me to get over there asap. I get there and his boss tells me if I take one thing I'm taking everything... so I did...

All for the wonderful price of free. Considering I didn't have any sort of lab before this I'm quite happy that I now have something to play with, even if they're not the best. Hopefully this will push me to get my CCNA. Now I just need to get working on a 220v circuit for the server. Sorry for the crappy cell phone pic and please ignore the mess in the background as everything is sitting in my basement for the moment.

If you have any extra give me a pm!!


MinPins said:
I do believe there is a singing fish on your wall.
Click to expand...

Give me back that fillet o fish, give me that fish
U

@Cypher- if you got any spears i like to take one PM me if you do.
M

No One except me should have that much luck...

My build is coming along, and the free beta for rack rental is still ongoing through Aug. 5th: http://www.ccnporbust.blogspot.com/p/blog-page.html 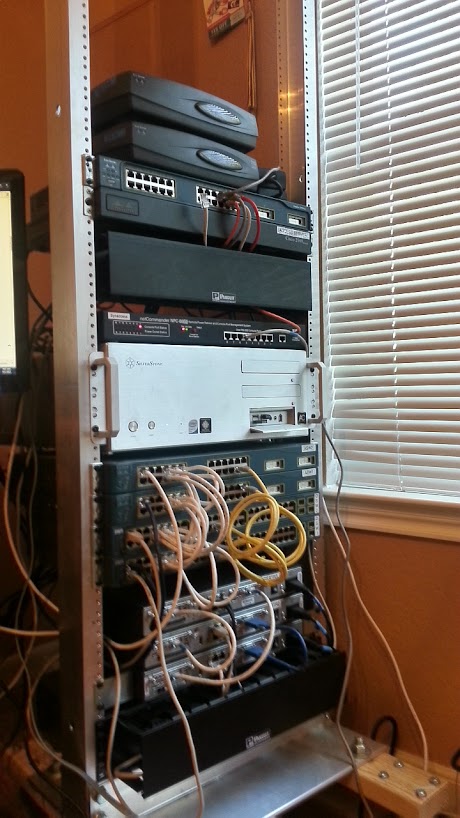 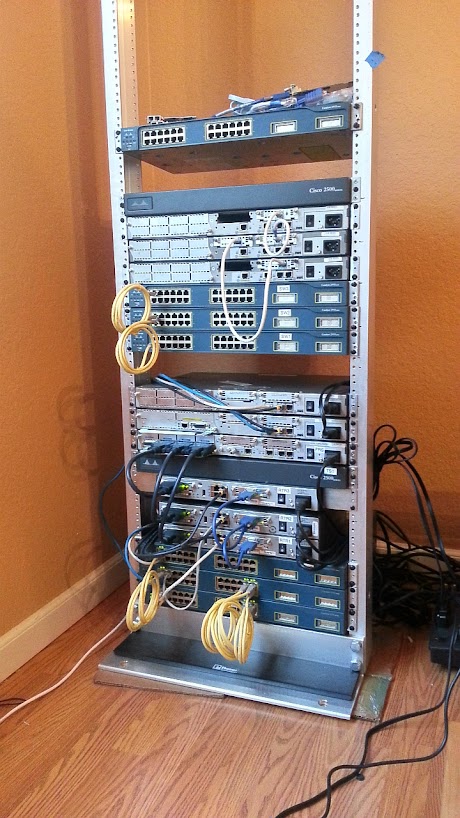 And since someone was posting workplace pics... 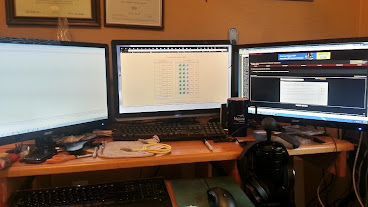 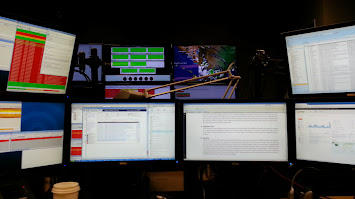 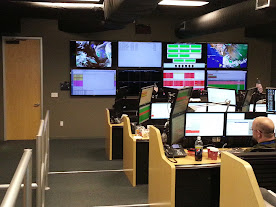 Red is good. It's blue you need to watch out for. (at least for me )
N

MrGuvernment said:
Question, i had one guy tell me once that connecting a device to device, like a switch to switch, you should use a min, of 1m cable, otherwise you can get too much cross talk between those devices..

any truth to this as i see alot of people using short cables between devices..
Click to expand...

That's the most strangest thing I've ever heard in my life...I do it all the time...Belden CDT 2 port jacks when you don't have a coupler, works wonders...or even a cross connect...
R

saedrin said:
Red is good. It's blue you need to watch out for. (at least for me )
Click to expand...

Haha for me red is usually critical, no blue, but purple is VERY bad, you basically lost a whole site if you see purple.
N

"Why did you unplug the purple line?"

"Barney made me do it sir...he wanted a necklace"

Yes, monitoring yo' cell phones... no, not like that. We provide the backhaul for VZW, SPR, USCELL, MetroPCS, and TMO.

The red is because none of our OSS staff should really be writing netcool probes for equipment they don't know. We have to weed through a lot of criticals for actual issues. We work with the keystone cops of OSS engineers. Worst implementation of netcool of anywhere I've ever worked. I generally ignore netcool and just monitor individual EMS/NMS alarm filters. And while I'm complaining... lol, we do all of this on Dell workstations with 32bit XP. Nothing like running 25 windows, 3-4 java intensive EMS', with 3gigs of addressable ram.

We also do all of the provisioning as well as monitoring, so have to have a LOT of screen space.
Last edited: Aug 2, 2013
R

Ouch, I get you. We have at least 20-30 windows here too, 4 screens which is nice... but only core2duos with like 4GB of ram (max XP can take but don't think the machines can take more anyway)

What's worse is our documentation is everywhere, excel sheets, PDF docs... those apps alone will chew up any ram that's actually left. Our systems are so brutal slow. Takes about 45 minutes to open everything after a reboot.

I've been working on a web based system to put all our documentation together in one central database, as I got the green light for it. That will help so much. We monitor pretty much everything telecommunications you can think of, environmental for all the buildings (I'd say close to 1k buildings), many misc equipment, DMS10, DMS100, fibre transport, managed services (customer's servers, switches, and what not), CDMA, HSPA is done by another noc but we have to dispatch, it's an odd process because we're basically the middle man for that. We even monitor air pressure in cables. Though not as much anymore, usually it's just a generic "air dryer" alarm that comes in. The stuff we're the most involved with I'd say is DMS though, like if we get an alarm we actually can do something with it, most alarms just get ticketed. We can control CDMA cell sites too.

It can get quite hectic if there is a disaster that happens where it knocks out power. We'll be dispatching techs everywhere with generators and keeping track of voltages to see which one needs a generator etc. We're kind of like the fire dept, it's generally quiet but if something's on fire it's go go go. Definitely an interesting job.

Oh and they recently upgraded our Oulook to 2008. OMG that is a POS, such a huge pig on resources. Half the time if I try to load the GAL it just locks up.
U

If hes using a Mac there is


Edit: You are right never mind I need to think first.
R I've totally got that same piece of Panduit cover on my rack. In fact, I have two of them.

What 10GbE switch is that?

FC (SAN) switches MDS9020 top one is all my FC disk arrays and initators, but the bottom one is going to be for IP over FC so basically really cheap 4 gbit network
J

I assume that's not just for personal use?
N

Imagine he was hosting HardForum in that colo.
R

I wish there was a colo near here where I could colo some stuff and have physical access to.
T Jay_oasis said:
I assume that's not just for personal use?
Click to expand...

top half yes, bottom half no
G

if by similar you mean practically identical then yes you would be right! lol

Is that purple thing an extreme switch? If so, which model? Just picked up a 6513 today for $400, I am still in the process of trying to flash IOS onto it because it is running catos. Its not going too well, having trouble finding a compatible image.
Q

You using that for something or just futzing with it? Seems like an awful lot.
S

QHalo said:
You using that for something or just futzing with it? Seems like an awful lot.
Click to expand...

I figured it was worth it for the amount of ports alone, they are all gigabit and PoE capable. Worst case I can sell it for as much as I bought it for.
R

Time to have a massive neighbourhood LAN party LOL.
J

What's the power use and noise level like?
K

As I remember, 6k5 are not so noisy, they have huge an pretty slow fans.

What supervisors do you have in this one ? Never seen those one. they looks pretty old, not sure they will run IOS.
Q

Not sure on power load just yet, but it does not throw off too much heat, and the noise is not too bad, at least for me. The sup cards are WS-X6K-SUP2-2GE which means it does not have layer 3 at all and it runs catos. I'm in the process of hunting down either a daughter or newer sup card.

seankthx said:
Just picked up a 6513 today for $400, I am still in the process of trying to flash IOS onto it because it is running catos. Its not going too well, having trouble finding a compatible image.
Click to expand...

I've always, always, always wanted a chassis switch in my house. If nothing else, for the e-Peen factor itself and that I think chassis switches are sexy. With 2U of GBIC ports, I'd be tempted to pick up a Catalyst 3524 for every room in the house and run fiber all over the place. Just cuz...

But then I look at my half cabinet at home and my electric bill and I chicken out.

Nice work being a braver man than I.
C

agrikk said:
I've always, always, always wanted a chassis switch in my house. If nothing else, for the e-Peen factor itself
Click to expand... This is the power draw for the 6513. Not too bad, considering how its pretty close to fully loaded. Just ordered a sup card that has the routing processor, it'll be here Tuesday. Then I can put IOS on it.
You must log in or register to reply here.
Share:
Reddit Pinterest Tumblr WhatsApp Email Share Link
Top