I got following results:

There is apparently a problem with the GPU and the RAM in this bechmark. However I have no problem to play games.
I searched on forums and I can confirm the d.o.c.p. is activated in the Bios. However I don't have "profile 1" or "profile 2" like it is usually recommended on the web but only a special profile name:

I have to admit I had pretty much struggle to configure this PC. The harddrive was not recognized at the very first installation. Later I had to download special drivers from AMD.
In the meanwhile I built a MSI machine, it went all smoother and easier (and benchmark works).
So any help from you is welcomed!

idk what that benchmark is, might help to name it.
every set of corsair ram i have ever used has needed more voltage. might want to try bumping it up to 1.4v, yes its safe.
if it still errors and everything else works fine, ignore it.
S

Oh, yes, the benchmark I did is here:
https://www.userbenchmark.com/Software

How do you know what is the safe voltage for the corsair?

Stromer said:
Oh, yes, the benchmark I did is here:
https://www.userbenchmark.com/Software

How do you know what is the safe voltage for the corsair?
Click to expand...

because ive been doing it for years. that "benchmark" is garbage, if its the only thing not working ignore it.
S

Ok, thanks. How do I check if the 1.4V is better than the 1.35V without using userbenchmark?

I made a CPU-Z and have following results, it seams that the RAM sticks have some different characteristics, even if they had the same reference where I bought it: 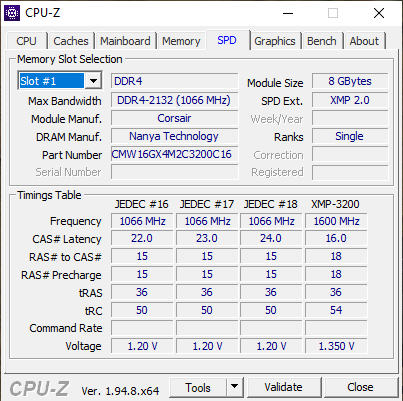 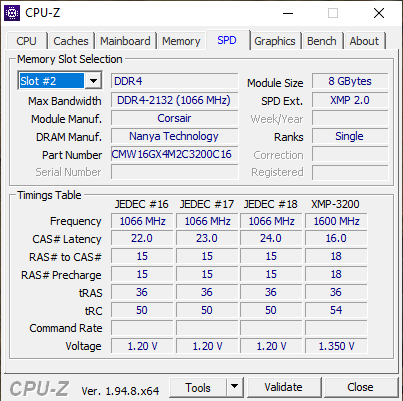 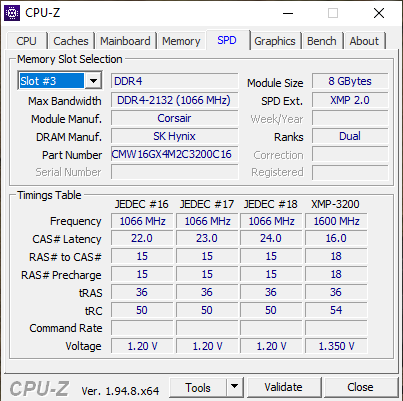 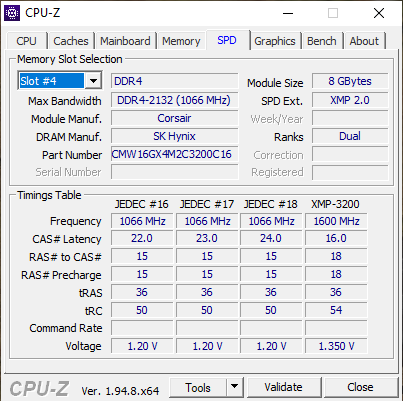 You'd know if its better if your computer doesn't crash on you.

Based on your screen shots, your DOCP isn't active. You're running at the JEDEC default 1066 (DDR4 2133). Yes, it would influence your benchmark if it were working, but shouldn't influence the fact that it doesn't complete it.

Also, I think you'd actually want to separate the modules so you'd have the Nanya in slots 1/3 and the Hynix in 2/4 because of the difference in single vs dual ranks. This is the problem with Corsair. You buy the same model memory and get two different ICCs and configurations. Single vs. dual rank is just the configuration of the chips on the individual sticks. I'm guessing the Hynix ones are older. I guess ideally you'd want to run 4xsingle rank or 2xdual rank, and not mix and match, but here we are because Corsair is useless with their naming schemes. I would make sure they are paired together correctly which they probably aren't.
S

Thanks. It looks a little bit complicated with Corsair Ram and Ryzen CPU..
Now I switched stick 2&3. So I have the same information slot1=slot3=SK and slot2=slot4=Nanya in CPU-Z.
However the references directly written on the sticks are different! I have slot1=slot2=ver8.31 and slot3=slot4=ver5.22 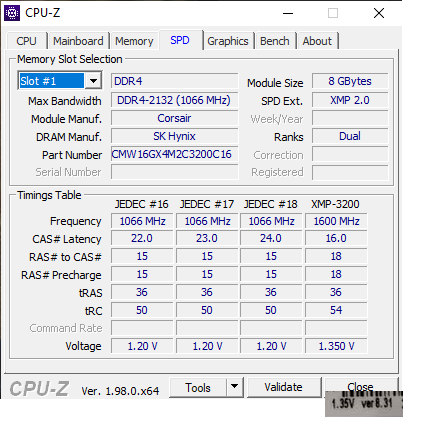 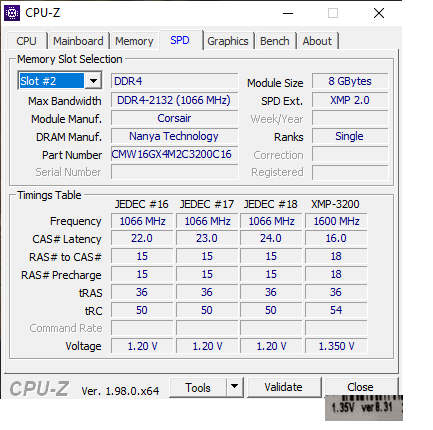 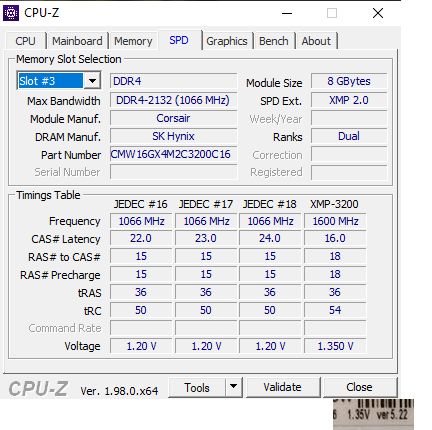 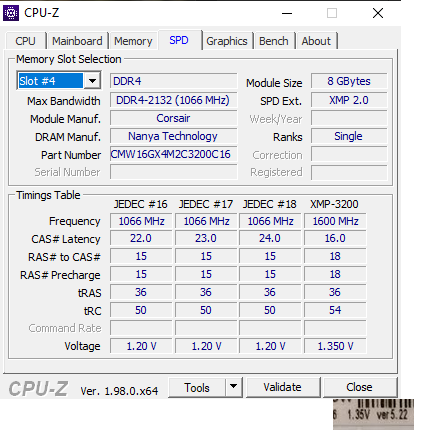 Which motherboard do you have? Something isn't right there. I would guess that the v.5.22 sticks are the Hynix dual rank and the v. 8.31 are the single rank Nanya. You want the sticks of the same version in the same channels. On my motherboard (which is also an Asus), you would want the one versions in Slots 1 and 3 and then the other version in slots 2 and 4. Worst case you can always check by only running two of the same version to test and then add the other ones later.

Then go in and enable DOCP which should make your memory run at 1600Mhz (3200 effective) and bump the voltage to 1.4V in bios also like suggested earlier.
S

OK...So try pulling out all of them RAM and then add back just 2 sticks starting with ver. 5.22 in slots 2 and 4 and see what you get.

Also, go into your bios and set the DOCP to enable 3200Mhz.
S

With ver 5.22 in slots 2&4 this time I have something consistent on CPU-Z:
Nothing on Slot 1&3
Slot 2: Hynix dual
Slot 4: Hynix dual
DOCP enabled but still low performance (even with DRAM voltage 1.4V) 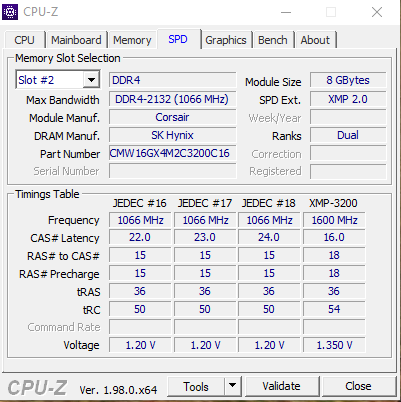 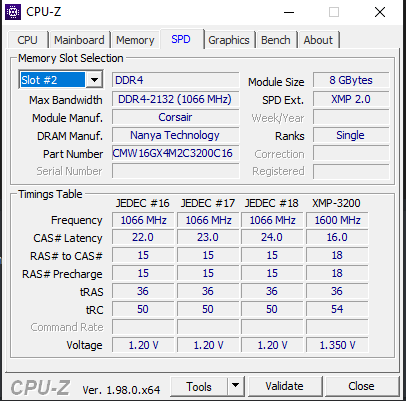 Note: in the meanwhile I solved the problem of the GPU benchmarking: I had to deactivate "Nahimic service"
So for now only RAM issue remaining

Note: in the meanwhile I solved the problem of the GPU benchmarking: I had to deactivate "Nahimic service"
So for now only RAM issue remaining
Click to expand...

Ok...that was what I would have expected also. Nahimic service has something to do with the onboard sound with the Realtek audio IIRC.

What happens when you enable DOCP in the bios? Does it not boot?
S

DOCP is selected and "accepted", the PC boots normaly, but looking at the CPU-Z I notice that the frequency is only at 2132 MHz

Try loading defaults and then applying again. What speed does it say under the memory tab of CPU-Z?

Looks like a clear CMOS. What are the other effects of it, do I loose my fans curves ect..?
Interestingly, my RAM is not in the QVL of my MB! 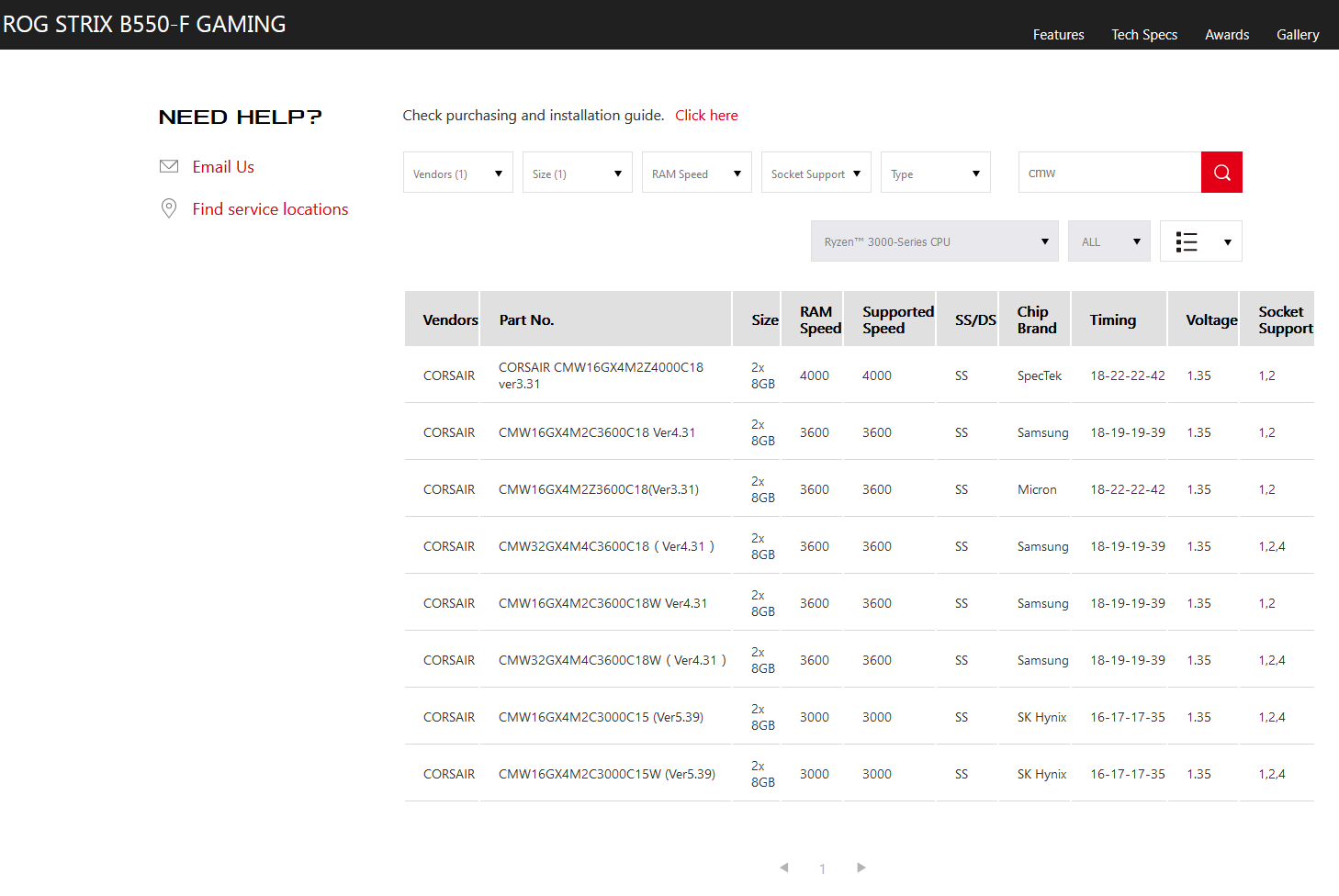 Stromer said:
Looks like a clear CMOS. What are the other effects of it, do I loose my fans curves ect..?
Interestingly, my RAM is not in the QVL of my MB!

The QVL is a joke. At this point it doesn't matter what's on there. Just about all RAM should work with a recent bios update.

Yes, if you clear your CMOS, you would lose whatever you set up in there. Not sure if you set your fan curve up in bios or in a Windows program.

For all we know though, it is working...what does it say under the memory tab of CPU-Z?
S

Good question, I have that: 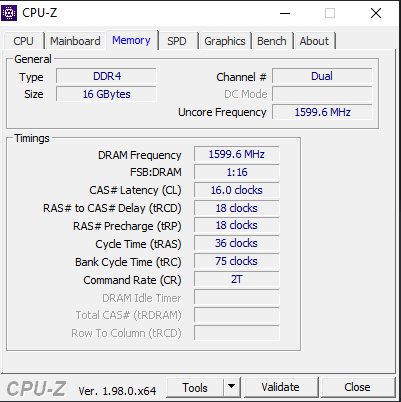 And in Windows performance:

I would just add in the other sticks and be done. Just remember since you are running "mismatched" sticks, keep the same versions in slots 1/3 and 2/4.
S

Some results tend to give a 3200 MHz (memory section, windows 10), and some not (SPD section, userbenchmark)
Hard to know if it really works as it should

Stromer said:
Some results tend to give a 3200 MHz (memory section, windows 10), and some not (SPD section, userbenchmark)
Hard to know if it really works as it should
Click to expand...

dont worry about cpuz showing 2133 in that box, mine does too even though the bios and windows show the proper 3600(oc'd from 3400). they are just showing the base speed. since you are trying to run 4 sticks, make sure your vsoc/vdsoc/vddrsoc(whatever your bios calls it) is at ~1.1v. i missed that you have 4x8 and with all slots filled you usually need to make sure its bumped up too. 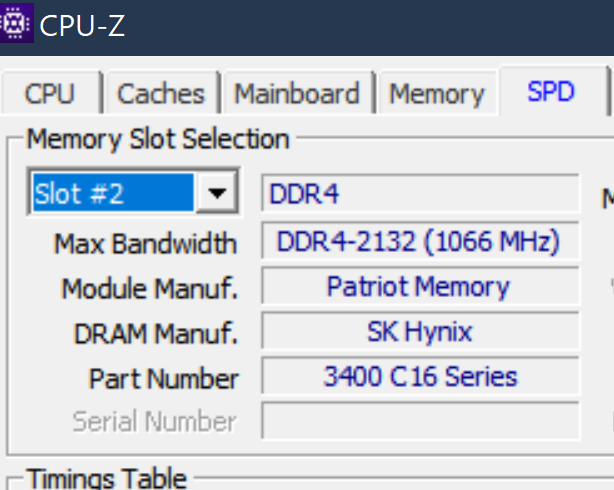 Thank you very much for all your contribution. I look at this last point with 1.1V asap

Stromer said:
Thank you very much for all your contribution. I look at this last point with 1.1V asap
Click to expand...