Who is still mining?

I've mined with six 1070 cards for the last year, but had sold everything else off before that. 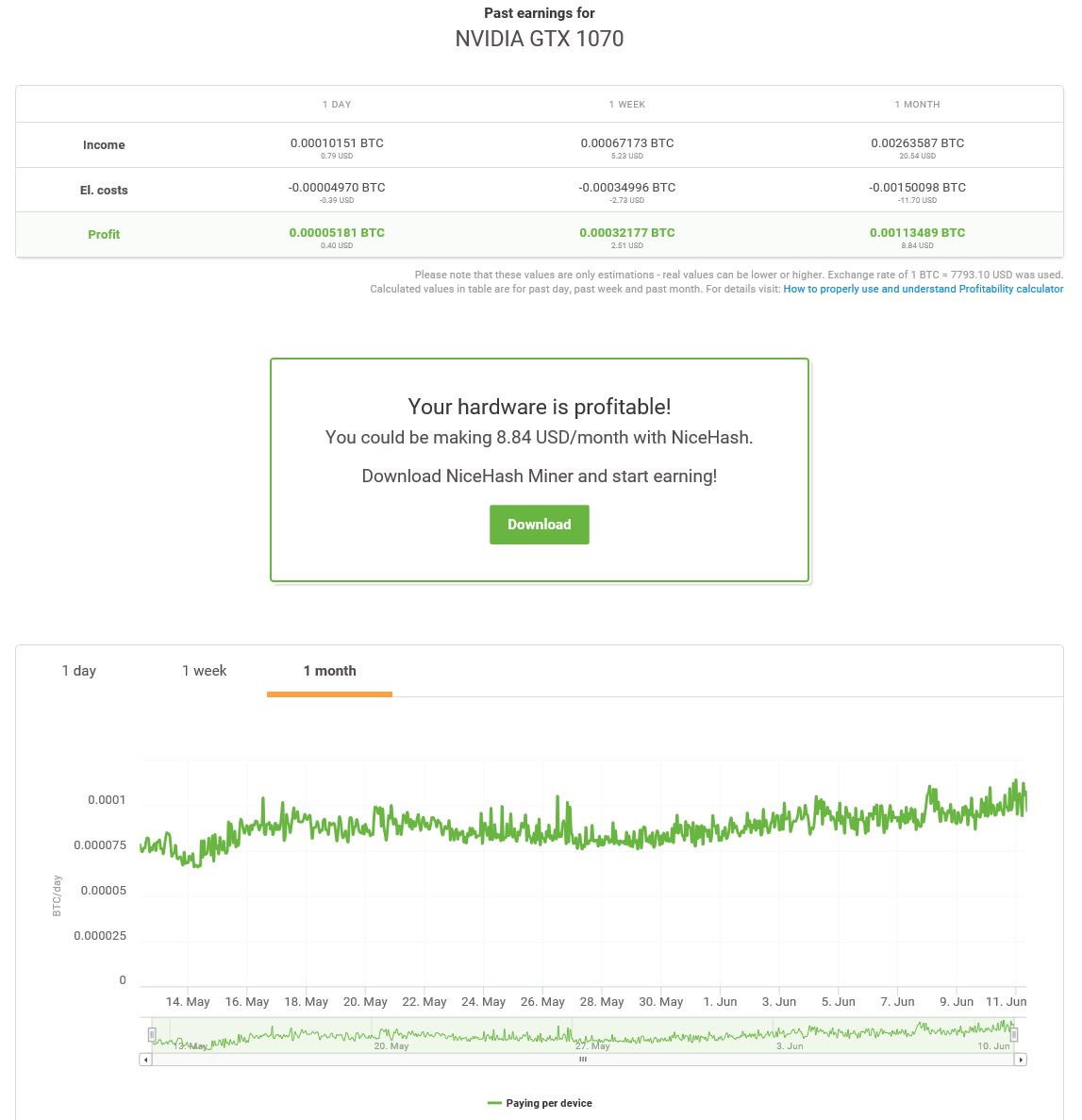 I started mining again (with just a single 1080Ti for now) a couple weeks ago. Just casually mining on Nicehash for now.

I still make a bit on various shit coins, I hodl a few and sell some for BTC - occasionally nice hash. Worst case scenario is I'm breaking even and investing my electricity dollars into BTC.
M

yeah i have been back for a few months now. was actually higher 6 weeks back and dropped around 25% (btc not $) due to bitcoin spiking, but last few days has turned that around and hoping it holds

Seems like mining is just coming back into vogue after the valley of unprofitability we went through last year. It'll be interesting to see whether it remains profitable long-term -- obviously critical to the success of the tech.
N

Been mining all year, mostly with ASICs, well one and now two. Been mining with the 2 1080Tis for a couple months and they are making more and more each day. It is now profitable to use the Vega's again, not sure I will bother unless the trend continues. If they go any higher it will prompt folks once again to suck up some of the gaming cards, especially the Turing ones, the 1660's are rather decent and economical for mining right now. Navi should be a beast with the Wave 32 shader if AMD allows mining developers access as well as driver support. Nvidia already has the higher prices in place which means they would get the profits more than just the sellers.
A

I haven't even stop once! And no I don't use Asic. all video cards for for almost 2 years now.
A

My Pascals are still fabulous, and they are about to hit the 2 year mark.


BTW, for the folks in Texas: www.powertochoose.org


BTW, for the folks in Texas: www.powertochoose.org
Click to expand...

I could make at least $15/month just not being lazy and picking up spare change laying on the ground.


** and not throwing mine down there with it
F

I'm mining again. I sold off most of my cards at the end of last year too and recently picked up a 2080 ti. Just wondering what settings people are running? I was typically doing +80-100 core and +400-500 mem @ 65-80% power. If anyone is mining with a VII I'd appreciate knowing what you guys run on that card too.
A

I just picked up a few more 1080TI from the Zotac 1080TI refurb deal for $440 in the hotdeals forum. All sold out no, but they come and go into stock over the last few days.
Z

Archaea said:
I just picked up a few more 1080TI from the Zotac 1080TI refurb deal for $440 in the hotdeals forum. All sold out no, but they come and go into stock over the last few days.
Click to expand...

I'm thinking about mining again the $ isn't quite there for the extra heat/noise it causes.
T

Riccochet said:
Just tested my 1080Ti again. Gets about $1.30 a day on nicehash. Not terrible, but not that good either.
Click to expand...

Yeah it dropped back down again lately.
B

Been thinking about getting a GRIN G32 Mini, but I need to research Grin a little more.
D

So mowing lawns and a paper round is more profitable a month than mining? Good work guys!
A

It’s not exciting profits right now. My six 1070 cards are making less than $3 total a day.

I bought 8 1080ti cards about a month ago when BTC started spiking towards $13k, thinking mining profits might come back. That was a mistake. The 1080TIs are still in the box. It’s not worth the extra heat and electricity use in the house during the summer at current profit levels.
B

How does Navi mine ?
E

daglesj said:
So mowing lawns and a paper round is more profitable a month than mining? Good work guys!
Click to expand...

I dunno I get about $200-250 a month profit for doing absolutely zero work. How much money do you make while you're sitting on the toilet? I'm getting paid to drop deuces, are you?
You must log in or register to reply here.
Share:
Reddit Pinterest Tumblr WhatsApp Email Link
Top