I've had my Samsung 32" C32HG70 for about 3 years now. When I recently upgraded my system from Windows 10 to Windows 11, I was pretty shocked when I could still faintly see the old Windows 10 Start-menu icon in the bottom left...

It's harder to see in the picture than when looking directly at the monitor, but it's clearly still there. I also provided a reference to what the button looks like (in case you aren't running Windows 10). 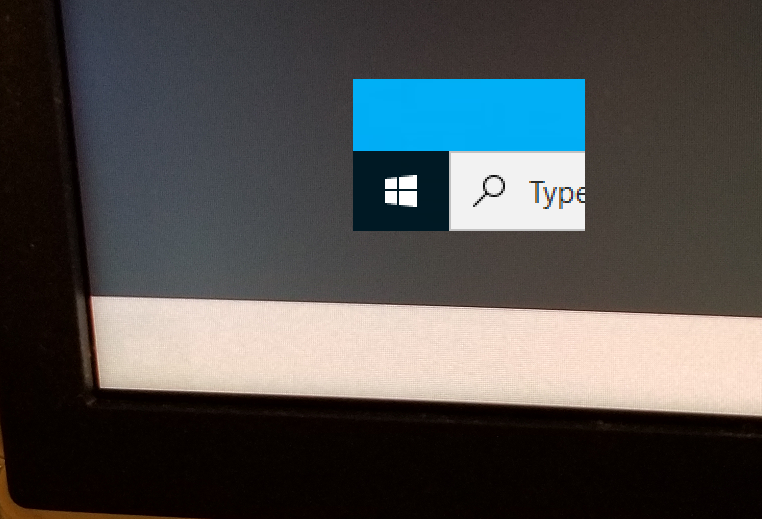 I'm pretty annoyed, as my old Samsung S27A950D TN panel that I used from 2011-2018 did not ever have any burn-in issues. And this monitor has a few other quirks also.

Should I just assume that this will be permanent and count my blessings that it's not worse, or is there anything I can do to fix it, perhaps some kind of display calibration? I didn't realize that burn-in was really even a thing anymore outside of old plasma televisions and extremely low-end cellphones. Is this something specific to VA panels? Because I literally have dozens of older TN and IPS panels, some of which actually display static images most of the time, yet still don't have any burn-in

Haven't seen burn-in on the VA screens I've owned. I have my backgrounds on auto shuffle every 10 minutes, so maybe that's helped avoid any unpleasantness. 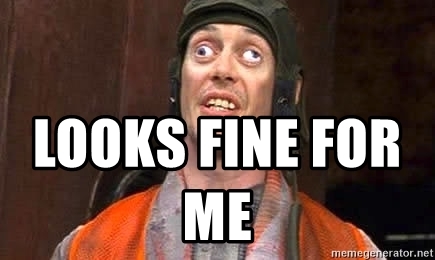 i dont see anything in that pic but, no, they are not supposed to have burn in. ive always auto-hidden the taskbar to avoid it "just in case".
ps: you could just shift the taskbar back to the left and you wont see it

Yeah it's surprisingly difficult to get a good picture. It's probably more that the Camera in my Samsung S8+ is not great. In the 2nd image I mostly outlined the burn-in that I can see. It could be worse since you don't really notice it unless you're looking for it. 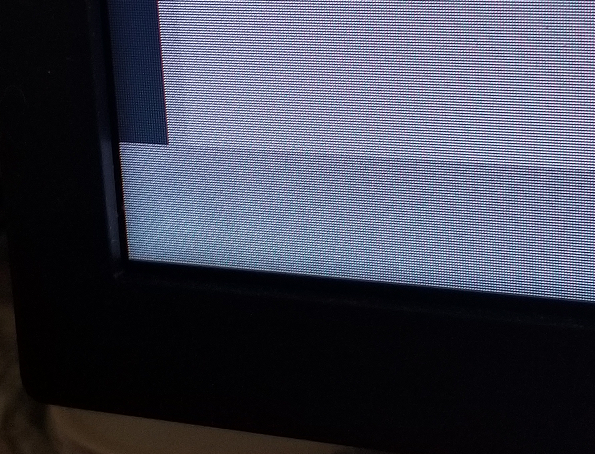 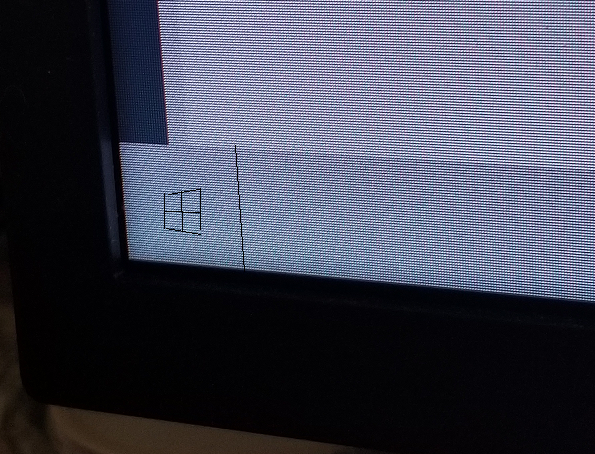 GotNoRice said:
Yeah it's surprisingly difficult to get a good picture. It's probably more that the Camera in my Samsung S8+ is not great. In the 2nd image I mostly outlined the burn-in that I can see. It could be worse since you don't really notice it unless you're looking for it.

ah, i cant see the logo but i can see a slightly darker square now that youve pointed it out. start auto-hiding your taskbar i guess.
T

LCD image retention is usually not permanent. How long has it been running since you upgraded? I'd guess this should get better over about a day or so, but maybe a week. If not, just figure out how to move the button back
M

I have have not heard of a case of permanent burn-in on LCD panels of any kind. Old CRTs burned in because they were literally shootin photons to the glass and you could see the permanently burned in image even after you turned it off. Plasmas had their own reason why they burn in (don't remember why) and OLED has "burn in" because pixels have a lifetime and they slowly dim as you use them. LCD however does not have any of those issues.

Not really no, but also technically yes.

So what do I mean with that un-useful answer?

With CRTs, you got image burn in if you had something displayed too long. As the name implied it was something burned on the screen and you were never getting rid of it. Hell on old ones it could get so bad you could see it with the screen OFF. It was there to stay.

With LCDs that's not the case, it is image retention. If you have something static on them for a long time it can cause the liquid crystals to lose some flexibility and have trouble returning completely to their neutral state, leaving an after image. The good news is it'll go away if you just leave the display off, or if you have it do something like cycle different colors full screen. Given some time, it'll fade. So it isn't permanent...

...except in the way that is sorta is. What I mean is that loss in flexibility is a change in the LCD that never completely changes. While the retention will go away, you will find that if the same image comes back, the image retention will happen much faster than it did before. The crystals are sort of "primed" to retain it and they always have that issue.

We see that at work. We have a screen, IPS in this case, that displays our KVM terminal 24/7. We never bother to turn the screen off and the KVM doesn't cut video. You can faintly see the retention of the interface on solid screens, particularly ones that are kinda mid-tone. Over the pandemic I decided to try and clear it up, since there was basically nobody on site. I left the screen off for long stretches, and had it run its image retention mode, which cycles full screen colors. That worked, I was able to completely clear it up... but it reappeared very quickly when it went to being back on all the time.

The good news is it never gets very bad. That faint "only if you are looking for it and on the right kind of background" image is about the worst it gets, even in hardcore situations like ours where it is literally a totally static image 99% of the time and is on 24/7/365.

toast0 said:
How long has it been running since you upgraded?
Click to expand...

It's been a couple weeks. I upgraded my main system pretty late in the beta. It will be interesting to see if it fades over time.
S

Some LCD monitors can get permanent burn in but it's rare. The very first 15" LCD monitor I had got the Windows logo burned in permanently. My old touchscreen thinkpad 13" had retention (but not burn in at that point) particularly when the screen was in brightest mode. The difference between the two being that retention fades but burn in only gets worse. I also had an older MVA monitor with major burn in tendencies that I gave away. Most VA panels have effectively zero retention or burn in, and I still have some 10+ year old Dell 24" monitors in service at work.

I agree that it's very rare. That's why I was surprised to see it on my panel that is only 3 years old.

Although, it does make me wonder. If it's so rare, how come it's still so common on cell-phones? It's almost disturbing just how many older phones have burn-in. It's certainly not rare in that respect. So why is it so much more common in phones? Just cheaper tech?

Example from an older iPhone: 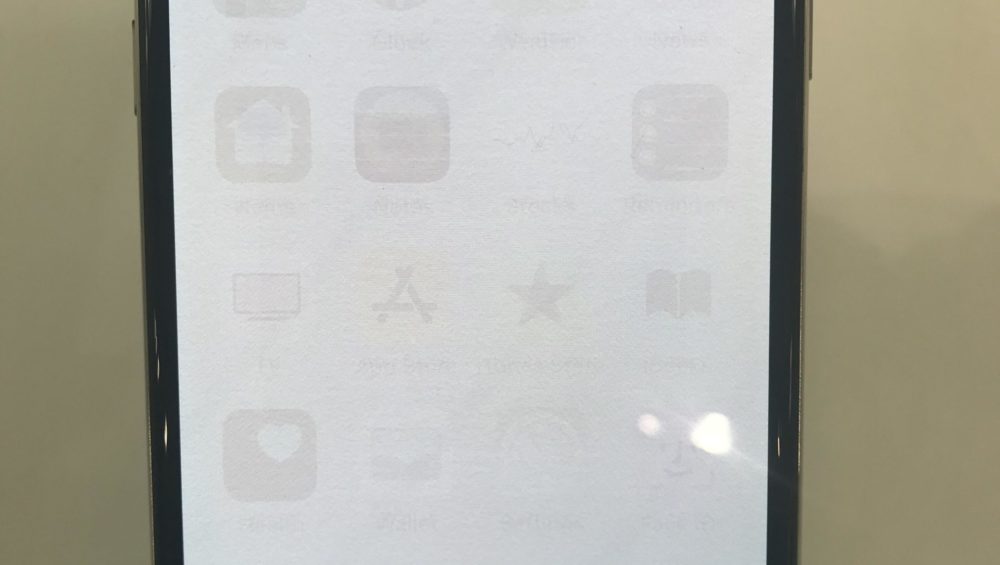 A lot of cellphones are OLED, which burns in. Don't know about that particular phone, but OLEDs are popular in cells.

Sycraft said:
A lot of cellphones are OLED, which burns in. Don't know about that particular phone, but OLEDs are popular in cells.
Click to expand...

Although they've implemented techniques to reduce the occurance, like cycling the active pixels, it does still happen.

Sycraft said:
A lot of cellphones are OLED, which burns in. Don't know about that particular phone, but OLEDs are popular in cells.
Click to expand...

But hasn't OLED only been a thing for a few years at this point? Most of the phones I've seen with the worst burn-in are like 5+ years old.

Windows 10 brought a new feature that allows you to keep HDR mode active all the time as it lets you reduce the desktop brightness.
But on LCDs, the backlight is now on high power, producing a lot of heat all the time which is not good for LCDs.
(Its also not good for keeping max brightness of your display, the LEDs are wearing out a lot faster.)
I've been waiting for reports of LCD burn in to start ...

Dont leave HDR mode on for desktop use, or let your display get hot.
S

GotNoRice said:
But hasn't OLED only been a thing for a few years at this point? Most of the phones I've seen with the worst burn-in are like 5+ years old.
Click to expand...

No it has been a thing in phones for longer. I don't know when different companies started using it, or who all uses it now, but Samsung has been using it since at least the Samsung Galaxy S, the original, back in 2010. Cellphones got OLED before anything else did, I think both because it seems to be easier to make them small (at least using Samsung's tech) and because they don't last as long as a TV so shit like burn in and short life are less of a concern.
T

GotNoRice said:
Although, it does make me wonder. If it's so rare, how come it's still so common on cell-phones? It's almost disturbing just how many older phones have burn-in. It's certainly not rare in that respect. So why is it so much more common in phones? Just cheaper tech?
Click to expand...

LCD retention / burn in happens easier at higher temperatures, and phones have a lot of heat generating parts in close proximity. Desktop monitors aren't always well cooled, but they don't have a fast cpu or a battery jammed up against the back of the LCD.
You must log in or register to reply here.
Share:
Reddit Pinterest Tumblr WhatsApp Email Share Link
Top