Time to update my data storage.

Looking for recommendations to update my Data Storage. Thinking about doing a raid 1 (I don't feel like paying for a cloud service and I have about 500GB to back up right now). My Data Drive is a 9 year old Hitachi 1TB drive. Thinking about going to 2 or 4 TB raid array for some room to grow. I figure spinning discs will be good enough for a raid 1 storage array. Just replaced my 10 year old WD system drive and upgraded to a Samsung 860 EVO 1TB drive and it sure is nice. Since these will be in may main rig (I have 4 available 3.5 drive bays) connected to my main board, not looking for NAS drives & my `puter does NOT stay on 24/7. Just looking for good reliable Sata III drives. TIA
M

With such basic data needs I would just buy any three drives (except <6TB Seagate) and keep one online for daily backup and the other two offline (one local and the other in a family/friend's house).

OK, a few things here.
If I was purchasing today, it'd probably be this Toshiba 3TB drive or this HGST 4TB drive, and get either 2 of them for RAID 1 or 4 of them if you need more space and want to deal with RAID5/6/10 or DrivePool. Given the pricing, I'd probably grab the Toshiba drives since they're $70/each after the coupon and that's nearly half off the 4TB drive's cost, and it's still triple your current storage capacity even for a single drive.

Now, with all that said, I'd get those 3TB drives and use the saved cash versus the 4TB drives to pick up Backblaze for $5/month. Backblaze is backup, and if you combine it with a RAID 1 array you should be internally redundant PLUS backed up.
G

"Raid is not Backup"
True always with older filesystems and always true in case of a real disaster (fire, theft, hardware damaged).

In case of a newer filesystem like ZFS, your first and most important insurance against dataloss is ZFS with its checksums to detect errors and with its auto repair mechanism that repais errors on the fly from redundancy. You only must care that redundancy is good enough to protect against nearly all sort of disk problems (ex allow any two or three disks to fail)

You must pair this with ZFS snaps. They are readonly and even a Ransomware with administrator rights cannot delete them via Windows or SMB (unlike Windows shadow copies). ZFS allows thousands of snaps, each consume only the amount of changed datablocks to the former one, like one every 15 min, every hour, day, week, month or year with a policy for retention. Via Windows "previous versions" you have access to these readonly snaps (at least on Solarish with its kernelbased SMB server).

For the real disaster you need a real backup, best a second ZFS system on a different location where you can use zfs send to sync them (even on a high load Petabyte server with open files down to a minute delay), but can be simply an external and removable disk or disk pair to use a mirror. Think of two backup sets that you use alternating. Such a backup must not offer comparable restore options like from local snaps where you can even have several go back options within a day. Its only for the real disaster. I have not needed this for years on my ZFS system but some day can be your last chance.

Thanks to all for your recommendations. I realize that Raid is NOT a true backup, just redundancy in case of a hard drive failure. I have had a few hobbyist friends that create digital art lose years of work lately because they lost their main storage drive and did not think of a backup and did not have any redundancy. This is why I am thinking of Raid 1 for a hardware failure and also want to give a special thanks to sinsiterDei for recommending Backblaze. I never knew about that company and did not want to pay the GAWD Awful expensive fees for Microsoft Cloud Storage. I need backup, not sharing my files with every device I have. I may share files between my Desktop and laptop but usually just use a thumb drive or my internal network to move them. Besides I am pushing my luck right now with a 9 year old Hitachi drive and don't want to lose everything (most of my digital images are already posted online but the work files and all my downloaded digital content would be a pain in the arse to reproduce/download again).
L

Do not depend on Raid for backup - as others above have said.

I'd suggest this:
HGST Ultrastar 4tb HDD ~ $89 Slow... but extremely reliable (I alternate backups on two of these)
+ the external docking station of your choice - I use the
Wavlink Universal SATA I/II/III 6TB HDD/SSD Docking Station for 2.5" 3.5" Hard Disk @$20
This has a USB 3.0/1 connection so you can b/u desktop and your laptop(s), etc

Raid system is no backup ...
W

Buy a Microsoft office 365 permanent license on eBay for $8 and use the 1TB OneDrive in comes with. Put the OneDrive folder on a separate hard drive. Now you have a physical drive for speed, along with backup in the cloud, for very little money.
I

westrock2000 said:
Buy a Microsoft office 365 permanent license on eBay for $8 and use the 1TB OneDrive in comes with. Put the OneDrive folder on a separate hard drive. Now you have a physical drive for speed, along with backup in the cloud, for very little money.
Click to expand...

I like this thought, but to clarify...does this mean that you only have 1TB of cloud storage? Granted, my music and pictures (the things that matter most) would fit in that space, though just. But, if I wanted to throw movies and TV shows and such, well, 1TB won't come close. Just seeking to clarify this.

Looking on eBay...are these the ones that provide an account and either 1TB or 5TB of OneDrive storage?
Last edited: Mar 4, 2019
W

IndyJoe1977 said:
I like this thought, but to clarify...does this mean that you only have 1TB of cloud storage? Granted, my music and pictures (the things that matter most) would fit in that space, though just. But, if I wanted to throw movies and TV shows and such, well, 1TB won't come close. Just seeking to clarify this.

Looking on eBay...are these the ones that provide an account and either 1TB or 5TB of OneDrive storage?
Click to expand...

I’ve bought ones that said 1TB and 5TB and they have all been 1TB.

The eBay ones provide you with an email address. So you could buy multiple accounts and link the accounts to your OneDrive settings. I have 2 OneDrive accounts (school provided and personal) and Windows handles it fine.

There’s always the chance that Microsoft could shut it down. But we’re talking 5TB of storage for a 1 time expense of ~$50 if you spread out across 5 accounts.

Reminds me of the old days of technet. Get ‘em while they last!
T

so ill go back and say what ive said in other posts.
for simple needs, speed not needed... areas where if system crashes... need ease of restore...

its simple..
I have stablebit drive pool and love it.. best $20 ive spent..

you take any drives ANY SIZE.. and put them in a pool and boom.. its more of a file raid..

what is cool about it is if you have 3 or 5 drives.. you can do 3 or 5 copies of stuff.. so ill take screenshots right now of my setup...


in this pic I have 9 drives. I can do 9 folder duplications of any folder.. granular. I love it as I don't waste drive space due to raid with parity or mirror ,etc.... 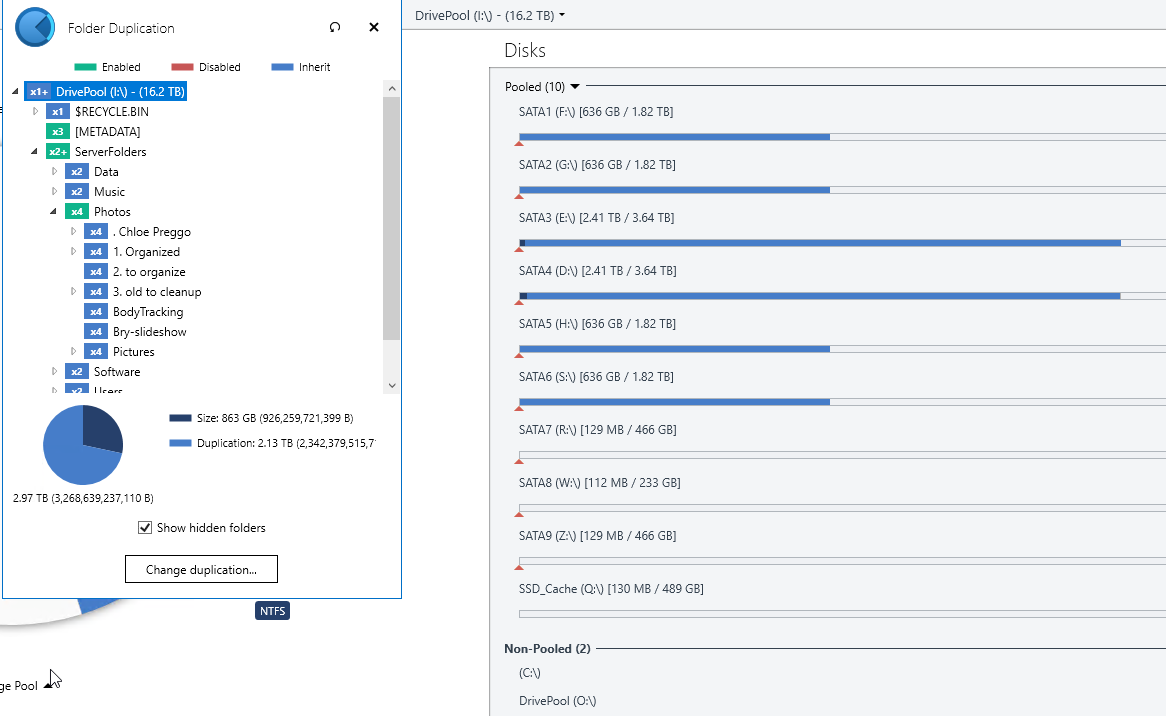 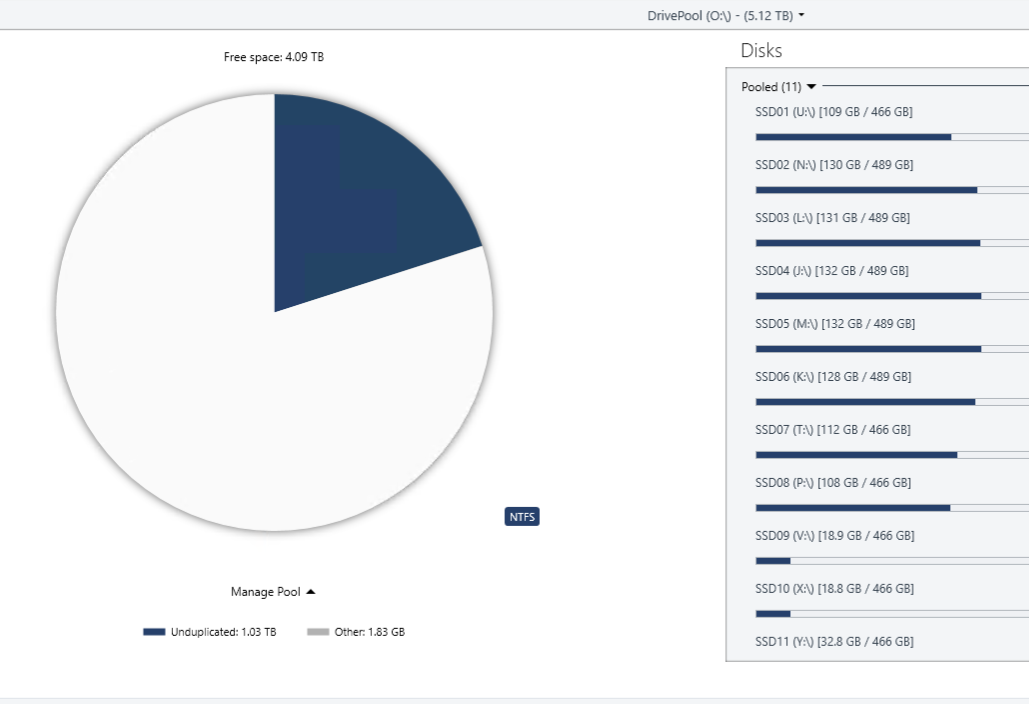 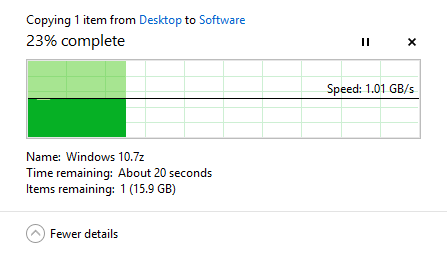 TeleFragger, what OS you are using? im also a stablebitt scanner/drivepool user, really a nice piece of software to make a simple server.
You must log in or register to reply here.
Share:
Reddit Pinterest Tumblr WhatsApp Email Link
Top