So I just completely lost my mind and ordered one of these for my PS4.

I threw caution to the wind and even customized it. 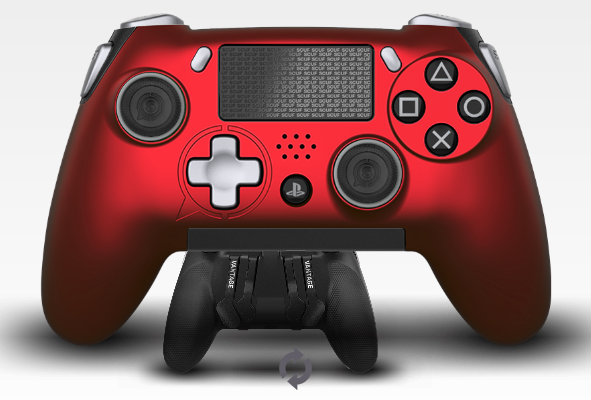 I generally like the Dualshock design, but recently I've been having issues with my thumbs and the joystick positions over relatively short periods of time. So I decided to go looking for a PS4 controller in the Xbox design. To my dismay, all the well reviewed ones are apparently no longer being made, and what is left are cheap knockoffs directly mimicking the Xbox Elite design.

So I said "fuck it" and decided to see what SCUF was doing these days. Lo and behold I was treated to this design on the front page as "Hallelujah" rang threw my head. I had some misgivings about SCUF because of the things I've read about in the past, but the last thing I read about them was almost 10 years ago. So I go looking at reviews and am generally pleased at what I'm seeing.

Final damage on this bad boy was $270 with expedited assembly and shipping. And I was disgusted seeing their $370 Forza 7 controller for the Xbox when that came out, and that is basically just a repackaged Elite controller with their patented rear paddles and improved internals. This may very well be just and Xbox Elite controller that has been modified to work with the PS4. Am I completely nuts? Has anyone here had any experience with SCUF?
C

You're nuts, but this is Hard so i mean it's certainly fitting. I have no experience with it so i wish you luck. A controller for the cost of a console is a big investment so i hope it works well if you get it.
V

Dint this company have a huge design flaw on one of the Xbox controllers, it was like 5 years ago or something. Hope not the case on this.

Let us know how you like it...I cant go that hard...but damn if I aint jelly.

Viper16 said:
Dint this company have a huge design flaw on one of the Xbox controllers, it was like 5 years ago or something. Hope not the case on this.

Let us know how you like it...I cant go that hard...but damn if I aint jelly.
Click to expand...

Ja, like I said I've been hesitant dropping this much cash based on the things I've read about them in the past, but that was years ago. The controller will be here tomorrow. I'm anxious to put it to the test, and I will most certainly update this thread with my impressions.

First impressions (not a lot of gameplay yet):
Time will tell if this thing was worth $270, but I am really happy right now. The faceplates cost $30 a piece, and it is just a piece of molded plastic with securing magnets that has been spray painted on one side. Right now I'd recommend people just go for the base model for $200. The controller comes with two extra joysticks, trigger extenders, D-pad disc, and wrench. If you want the extra joystick types (there are 6 including convex and concave with short, medium and long lengths) and anti-friction rings, you can buy the $12 accessory pack.

Discovered one slightly annoying thing:
You can't turn the console on remotely with this controller.
V

Great first impressions listing, thanks for spending the time to write it.

Bummer to hear about not being able to turn on the console with it.

After a few days with the controller and spending hours with it in different games, I can say with near certainty that this is the best controller I've ever used. Early on my muscle memory with tricking me into reaching for the Xbox guide button at the top of the controller . The shape is really making a big difference. I can go several hours now without running into any issues with my thumbs or wrists. I also absolutely am loving the fact that there is no latency compared to the Dualshock. This was something I had to get used to over a long period of time starting with the PS3 and it's such a relief that it is not there with this controller. The joysticks are also so smooth, and the calibration is perfect.

Now I just hope that this thing lasts for years to come like the original PlayStation Dualshock did and still does.

All that said, my opinion still holds that you shouldn't waste the extra money on customization like I did. I don't think it was worth the $270 I paid, but the $200 for the base model is reasonable for this level of quality.
T

Cool. Preference between this and the MS Elite?

TripleAgent77 said:
Cool. Preference between this and the MS Elite?
Click to expand...

This. It just feels better in my hands than the Elite does. I didn't know how I'd feel about the lighter weight, but it's just perfect. After using this for a couple weeks, the additional paddles on the back of the Elite feel like they were tacked on with little thought especially. Just about everything about the SCUF controller feels perfect. Kudos to their designers and engineers.

So a year later I decided to get another SCUF based on my experience with the Vantage. I bought a Prestige to replace an original Elite that suddenly started falling apart about a month ago despite working flawlessly up until then. The controller costs just as much as the Vantage, and I did some customization to this one just like the Vantage since there was a sale going on. After receiving the controller I have to say I am quite disappointed with this one. The experience is just about the opposite of the one I had with the Vantage.

The first sign something was different was the packaging. The contents sounded loose in the box while the package felt much lighter. The design of the box was also not very inspired. These are little things to notice, but in the end it goes to how much passion goes into the product. Taking the sleeve of the box revealed a plain black top opening box with the SCUF logo embossed on the top. Opening the box was the second sign, as the lid was so tight that it took me more than 5 minutes to get it loose. I was thinking about cutting it, but I really didn't want to especially if I needed to return it. I was at least relieved when opening the box that the controller itself was packed snugly in a cardboard shell. It was the separate accessories that were loose underneath. By contrast, though, the Vantage was packaged within a foam carrier inside the box where nothing was flopping around at all.

Removing the controller from the box led to the first bit of disappointment. Unlike the Vantage That is completely custom I noticed right away that the Prestige is using a standard Xbox One controller shell. It still felt good in my hands initially. Taking the magnetic faceplate off revealed, however, that the internals were custom. This could be felt while testing the buttons, trigger and joysticks. It is not as modular as the Vantage, unfortunately, but all the switches and pots are easily accessible for maintenance. Okay, so it looks like the controller may actually still be good despite outside appearances, so let's give it a test drive.

Plugging it into my PC and first testing out a driving game leads to the next bit of disappointment. Despite SCUF advertising this as an "upgrade" to the Elite controller it appears that it is using a standard Xbox One control board. Opening the Accessories app only brings customization available to standard controllers. Let's get into the game, in this case F1 2020. Keeping the settings I used with the Elite controller I go out on track. Coming out of the pits I notice some deadzone despite setting the game option to 0% prior. Check the options. Indeed, the settings I used have not changed. Continue on to the first set of turns. I drive without any driving aids and immediately lock up the brakes with my muscle memory.

There has to be nothing wrong with the game options, so I exit and go into the USB game controllers settings in Windows to see what the action on the triggers and joysticks looks like. I see that none of the analog components are sitting dead-center, so I go ahead and calibrate. That is now fixed, so let's take a look at that action. Testing the triggers reveals that both are reaching the full data range at only two-thirds of the physical range. I read about the triggers having some sort of adjustment by turning a small set of screws on the back, so I play around with that to see if it affects anything. Unfortunately it is only for the hair trigger locks. Take a look at the joysticks next. There is play around the center that is very non-linear, as the input in all directions appears to jump from zero to 7-10% with any slight movement. So it's not a deadzone, it's just that the action is not smooth as I would expect.

Not really acceptable for a $150 controller. None of these input issues were present with the Elite controller. I believe I am returning the SCUF to get an Elite Series 2, instead.
You must log in or register to reply here.