I'm looking for a small case for a micro ATX board but can also fit a full size video card. Specifically a Radeon 6800xt. I'm going to run a Ryzen 5950 and in addition to gaming I also do video encoding where the CPU can run at 100% load for days at a time. So cooling is very important. I'll run a closed loop water cooler of some sort for the CPU. I probably won't water cool the GPU.

I used to build computers regularly for the past 2 decades but i'm a bit out of the loop now due to other life priorities and such. But now i'm getting back in the game.

Can you recommend a small case that can fit a full size video card and water cooling with a window. First priority is cooling. Must have excellent airflow. Second priority is sound. Must be as quiet as possible. Appearance isn't terribly important. I'd prefer a case in white but not required. A simple design is best. This will sit on top of my desk. I'll run 3 drives in it. Hopefully the board can fit 2 NVMe but if not then 1 NVMe and 2 SSD. For budget i'd prefer under $200. But if it's worth it I may stretch that a bit.
Last edited: Dec 7, 2020
E

Something like this would check most of those boxes:

Small size, a window, good airflow, and low noise are tough to come by.
Glass panel + high heat generating CPU/GPU are one thing but silencing those in a compact space?
You might have to go custom loop to achieve as quiet as possible depending on your noise acceptance level.

The only matx sized one that comes to mind for me is the FD Define C Mini and frankly its only at an acceptable level on the airflow unless you remove the front panel: https://www.fractal-design.com/products/cases/define/define-mini-c-tempered-glass/black/

If you're willing to go mid-tower:
For some of the best airflow the Coolermaster H500m is pretty top of the charts for airflow due to the dual 200mm fans that are quiet with open mesh front:
https://www.coolermaster.com/catalog/cases/mid-tower/mastercase-h500m/

A secondary option would be the Fractal Meshify line (this one comes in white):
https://www.fractal-design.com/products/cases/meshify/meshify-2-clear-tempered-glass/white/

Oh theres one more I forgot this would probably meet all your criteria except noise, but its got so much airflow and many spots for fans you could probably use lower rpm fans.
(it doesnt come with fans so you'd have to purchase those separate but the benefit is you get to choose whatever you want)

Spartacus09 said:
Oh theres one more I forgot this would probably meet all your criteria except noise, but its got so much airflow and many spots for fans you could probably use lower rpm fans.
(it doesnt come with fans so you'd have to purchase those separate but the benefit is you get to choose whatever you want)

Thank you for the recommendation! I'll add it to my list to consider.
A

I could stretch to a mid tower if it's worth it. I like the clean look of the fractal design cases. Any thoughts on bequiet! cases?

Looking at a dual radiator though I could go triple if it's worth it. Especially for the large video encoding work loads I do.
Last edited: Dec 7, 2020
E

Archer75 said:
Any thoughts on bequiet! cases?
Click to expand...

Haven't owned one personally but I think they're well regarded. Their smallest options look to be a little larger than the Fractal Mini C, so part of it will depend on how big you're willing to go.

the phantek p300 series is very similar to the mini c. im happy with my p350x.

Archer75 said:
I could stretch to a mid tower if it's worth it. I like the clean look of the fractal design cases. Any thoughts on bequiet! cases?

Looking at a dual radiator though I could go triple if it's worth it. Especially for the large video encoding work loads I do.
Click to expand...

My brother in law has the Base 500 in white, it does great noise wise, cooling is pretty decent.

The be quiet cases are good overall however many of them they're nothing special airflow wise (their ones with mesh fronts do best "airflow optimized"), they do come with the bequiet fans though so they're inheriently quiet due to those.
This one is pretty solid for airflow though due to the mesh front (and is white): https://www.bequiet.com/en/case/2050

Both be quiet and fractal come with noise dampening material inside the panels, however when you put a glass side and make the front mesh for good airflow it kinda counteracts that effort.
One of those good fast cheap triangles ~ Super Quiet, Great Airflow, Window ~ Choose two

On an AIO radiator aspect go with a 280mm one would be my recommendation, you use quieter 140mm fans and its very similar performance to a 360mm without being as long/bulky (they're the best bang for buck performance & cost wise too generally).
Last edited: Dec 7, 2020

Good Case, clean design, Good airflow. Got this for my father last Christmas, I like, he likes it. Pretty good features for the price, no frills, no bs. Runs really cool with Noctua Fans

I have the larger version of this case. Once you go handles you never go back. Case has excellent airflow and cable management & built like a tank. A dream to work in.
Last edited: Dec 7, 2020
Z

Archer75 said:
I could stretch to a mid tower if it's worth it. I like the clean look of the fractal design cases. Any thoughts on bequiet! cases?

Looking at a dual radiator though I could go triple if it's worth it. Especially for the large video encoding work loads I do.
Click to expand...

I've had one of each recently, though both larger models - Fractal Define 7 XL and be quiet Dark Base Pro 900v2. I was a big fan of the Fractal Define series and ordered another one. Then it arrived with factory defects and I found I didn't like it as well as the older models so it ended up going back. The big thing I didn't like about it is the new one had wimpy plastic feet. They were metal on the older models, like my 2012 vintage Define XL. Also I'm not a fan of the snap-on only side and top panels or the fact that the PSU shroud is riveted in place. I want screws or something to securely fasten the panels too and I'd like to be able to take that shroud out while building. The shroud isn't a big deal and I'd forgive it in a cheaper case. It's basically a mostly really nice case with some cheap bits thrown in. Of course the Define has a totally different design from other Fractal cases like the Meshify, which offer better airflow. After sending the Define 7 XL back I pretty much went back to the drawing board and ended up ordering a be quiet! Dark Base Pro 900v2.

be quiet! makes a range of stuff too, and the fancier ones are complicated. The Dark Base Pro 900v2 I have is quite well made and does a good job of keeping things quiet, probably better than the Fractal Define 7 XL, but it's a very complicated case. It has plastic feet, but they're Mercedes plastic feet -- they are thick, slightly flexible and look like they're designed to avoid transferring vibrations from the case to the floor. The Fractal plastic feet are more like "ships from China" discount replacement parts for a Volkswagen from some Amazon marketplace vendor you've never heard of, though I may be unfairly biased because one of them arrived shattered. The Dark Base is configurable in a maddening variety of ways, like the mainboard tray can be moved up or down and inverted and mounted on the other side of the case. I ended up with the inverted mount setup. It kept my AIO from colliding with the EPS12V power connectors. It's not just the mainboard tray either. You can move disk mounts around, move the PSU, etc. The smaller and cheaper models are less complicated, but the big one... I probably spent 8 hours messing with it. I got the last of my parts on a Wednesday and didn't get around to installing anything but the PSU and a couple fans (both of which were installed and removed several times) until Saturday afternoon. The smaller and cheaper models offer fewer configuration options, but I like full tower sized cases so I can set them on the floor and easily reach the top ports.

I'll toss out the Cooler Master Silencio cases as a cheaper option if you like the Fractal Define look. I used a Cooler Master Silencio S400 (mATX) in a build I did for my dad for Christmas after getting irritated with Fractal and looking for alternatives and was pretty impressed with it given the $100 price tag. It had fewer deficiencies than the Define 7 XL I had briefly. They also make a larger ATX mid-tower version, I think it's the S600. They look a lot like the Fractal Define series, including the door on the front. Actually, they might even have a slightly cleaner, more non-descript look -- and no Cooler Master logo. They just have the outline of one engraved into the front door. No letters, just the outline. The main advantages to the S400 compared to a Fractal are metal feet, screw-on panels with captive thumbscrews and a $100 price tag. The sound insulation and metal aren't quite as thick as on the Fractals, but on the up side they weigh a lot less. I also didn't notice any flimsy bits that seemed likely to break. It's not top quality but it's consistently decent. It has a front door just like a Fractal Define, so the airflow won't be the best. If you want more airflow I bet Cooler Master has a version without the door. They make a bewildering variety of cases. There also isn't much room below the vid card. The PSU shroud basically starts where the mainboard ends, so you get a slow or two worth of space depending on how big the card is. The PSU shroud isn't removable but I'll forgive that since it's much cheaper than a Fractal Define. It does have front and top dust filters though, plus one on the bottom for the PSU. It can top mount 120 and 240mm AIOs, though anything bigger than a 120mm requires removing the optical drive bay. Top mount 140mm would likely work too, but you'd probably have to lose the optical bay to avoid crashing into the 12V power connector. You could front mount a 280mm and set it up as an exhaust if you wanted. Just put a couple 140mm intake fans in the top, lose the rear exhaust fan, and fiddle with the pwm ramps to keep positive pressure so the filters can do their job.
A

Thanks for the responses. You've given me several options to consider. Good news is with the limited availability of ryzen 5000 series processors i'll have plenty of time to consider! Next up is motherboard research.
3

I'm also looking for a mATX case and I'm finding there is not much new stuff out there. Especially if you want a solid side panel.

Manufacturers are either doing ATX or ITX.
A

If I could fit it all and have good airflow and cooling i'd go for an itx.
P

Not technically a quiet case though...

https://www.sliger.com/products/cases/cerberus/ I was gonna go with one of these to move my hardware into, sick of my caselabs cube thing.
K

Probably not your thing, but i'm going with the Lancool 2 Mesh Performance for my new build. (Does have glass on both sides though) 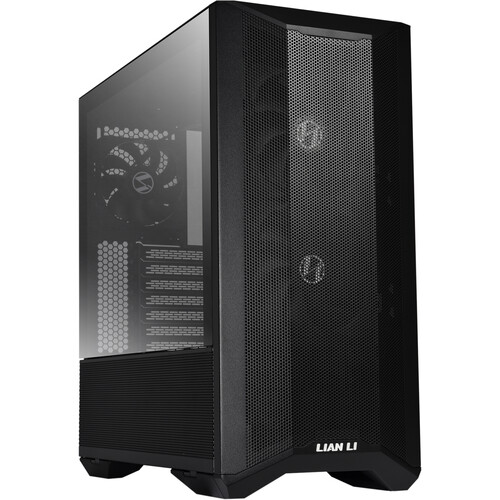 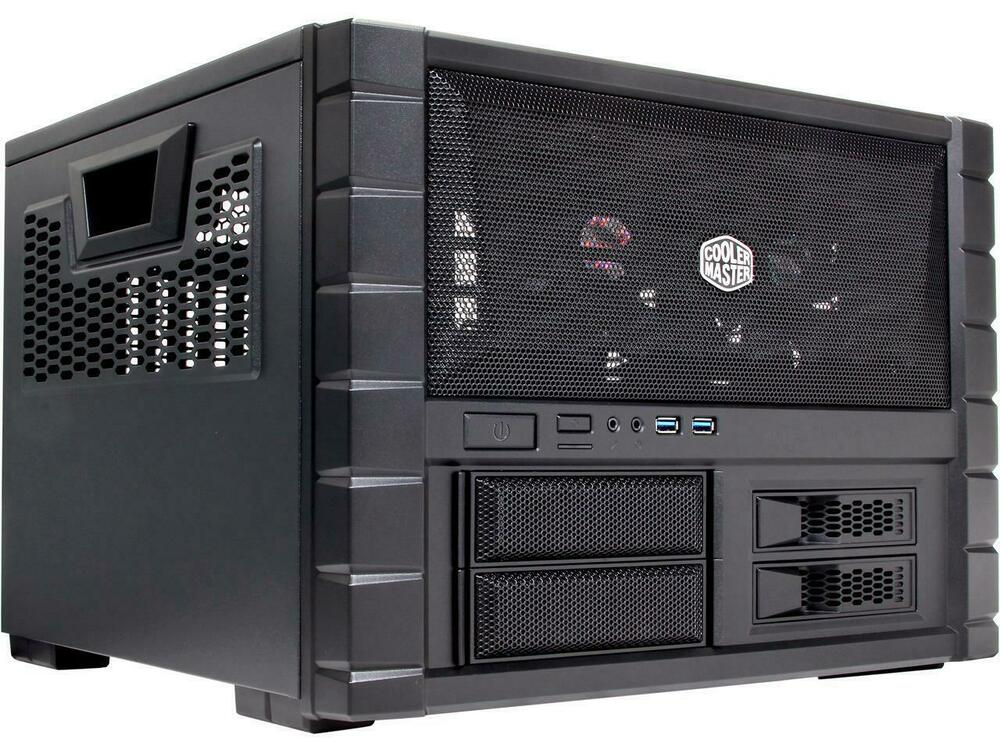 Maybe can check this out