Question on my Threadripper 2950X temperature.

Because I encode a ton of video, sometimes using Sony Vegas with the Neat Video plugin but more often via FFmpeg, I decided that I needed to replace my six year old Core-i7 3770k (overclocked to 4.2Ghs at stock voltage) and get an AMD Threadripper. I chose the 2950X as Windows has scheduling issues with the the 2990wx.

I am using a Noctua NH-U14S TR4-SP3 Cooler. I am using the thermal paste that came with it:
https://www.amazon.com/gp/product/B074DX2SX7/

The article below says that the (Tdie) value for CPU temperature is the one that a person should look at, especially if you are running an AMD Threadripper.
https://www.guru3d.com/articles-pages/amd-ryzen-threadripper-2950x-review,8.html

To keep a "consistent fan policy," AMD is forcing a 27C offset on all models Ryzen Threadripper processors. This makes them report the temperature a good 10C above what the sensor reads.
Click to expand...

The Tdie value that is reported in the image below is 27C (it is 26C as I type this) when it is idle. Maximum temperature that I have seen on my computer is 46.5C (as shown in the screenshot below). The temperature in my house is 66F or 18.8889C.

Apparently my CPU idle temperature is slightly below room temperature.

That can't be right, right?

Below is a link to my full build.
https://pcpartpicker.com/user/Navilor/saved/#view=JbBdXL 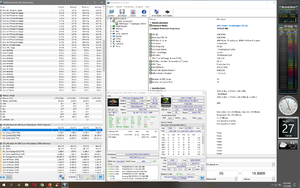 I think you misread that article.

In short, if you use any monitoring software, you need to look at the Tdie as temperature, it's the correct one to look at.
Click to expand...

Thank you for the info. I had a rectal cranial inversion happen while I was posting my original question, but I sorted it out.

I looked at this post for the the then new Ryzen CPUs.
https://community.amd.com/community/gaming/blog/2017/03/13/amd-ryzen-community-update

This is what gave me the proverbial clue.

They state that (tCTL) - (tCTL offset policy of 20C) == True Junction Temp or Tdie for their non-Threadripper Ryzen products. My Tdie value on my Threadripper is (tCTL value of 53.3) - (tCTL offset policy of 27C) which means that my CPU is actually at 26.3C (79.34F) which matches Tdie value. My house is at 65F so I am 14.34F above room temperature.

Thank you for your patience while I got my head out of my ass.
E

Well I hope the doctors were able to successfully remove your cranium from your rectum. lol

elite.mafia said:
Well I hope the doctors were able to successfully remove your cranium from your rectum. lol
Click to expand...

Self surgery. No doctor required.
R

Hello I am interested in similar x399 build with Noctua U14S cooler. I see you have 8x8GB RAM config, did you face any issues with clearance for this large cooler, RAM sticks and first PCIE slot and did it affect your case and RAM choices

Yes, I did have problems with RAM height. The cooling unit fit, however the fans had to be raised a bit to get proper cooling. I did not add the coolers to the RAM. The image below should show tolerances.

Navilor said:
Yes, I did have problems with RAM height. The cooling unit fit, however the fans had to be raised a bit to get proper cooling. I did not add the coolers to the RAM. The image below should show tolerances.

Thank you. Those of us considering air cooling for TR4 are in minority and it is difficult to balance the configuration. Could you please edit you signature to give a complete picture of your build (RAM and speeds, cabinet).

raazet said:
Thank you. Those of us considering air cooling for TR4 are in minority and it is difficult to balance the configuration. Could you please edit you signature to give a complete picture of your build (RAM and speeds, cabinet).
Click to expand...

Off topic: You have 18TB+ storage do you run a NAS setup such as Synology/QNAP to manage these

I store my files on a separate FreeNAS box and move them there via WinSCP. Yes, I do have a SMB share but it is read only (different permissions between the WinSCP user and my Windows user) to make it tough for people to screw with.

The ZFS file system that is the default for FreeNAS rocks my world. I back up my content to an external 6TB USB3 drive via Robocopy. I'll eventually need to get a larger external drive for that but I'm really good for now.

I moved from 1TB drives on my old system to 4TB drives for my new build because I do a crapload of video encoding, hence Threadripper. Content takes up a non trivial amount of space during my conversion process when I am batch processing movies and TV series. I also like things to be organized so I have one drive for emulation, one for games, and one for miscellaneous crap which includes my core system software, game patches, video storage, and, obviously other misc crap.

I use Neat Video with Vegas using a heavily documented 1,600 line bash shell script that I wrote (which I put under copyright because I could) and run it under Cygwin so that to I can bend FFmpeg to my will. More on how I create streaming media compatible content can be found in one of the posts on my video blog.
R

Thanks for linking your informative blog, ffmpeg always seemed daunting but I can now learn from your blog. You are seasoned user of cygwin but for newbies of unix emulators some devs created a light weight emulator babun , I use it for light windows automation (find|grep|sed)

I've been in the streaming media industry for eleven years and cut my teeth on the RTSP protocol when I worked at RealNetworks [BUFFERING!!!]. I became their onsite encoding expert after I was tasked with finding an encoder that didn't create A/V drift like their former Helix Producer product did with a few files. Compiled FFmpeg the hard way and failed my way up to success.

I am now the FFmpeg subject matter expert at Wowza Media Systems.

Look at FFmpeg as if it were an order dependent filter chain and everything regarding it will start to make sense. I hope my blog helps.
You must log in or register to reply here.
Share:
Reddit Pinterest Tumblr WhatsApp Email Share Link
Top