As always, keep the images to a reasonable embed size. I personally recommend 1024x768. If you want to show of Hi-res versions, then link to them on a hosting site such as imgur, or Dropbox. Also keep the links/embeds updated so they don't go dead throughout the year!

Here is my updated workstation for this year. Not a whole lot has changed from last year, except the floating shelves, and some new hardware. Also wanted to showed off the new Vizio P-series 4K and Logitech K830 The only update I've made is i now have a stand for my laptop so its easier to access. The tv next to my pc. I want to build a stand alone steam box for it for funsies. I've never bothered to post in this section before since it's ...blah (non [H])
but at least 2014 looks decent

The "Workstation" portion of my lab did not change at all in 2014.
I was able to keep it clean the whole year though

I hope to follow up with more pics [2015] later this year once I get an area in my basement finished out.
C

Very nice, going to plan for a more modern look in my room. Will post pics soonish
T

Your black cat has a spooky set of eyes!!
A

Tyler-Durden said:
Your black cat has a spooky set of eyes!!
Click to expand...

Got this cubicle about a month ago and built the new machine on Dec 12th.

Very similar to my old setup,

My other workstation looks pretty much the same as it did 2 years ago, I stained the desk black about 6 months ago,

Lol, indeed, even soundcard lol. I modified my LED's in the SBZ with a white LED to break up all the red. I hate this POS Saitek keyboard, wanna replace with something nicer, but don't wanna spend the money

Actually, the sound card is in the new machine, the old setup with the Saitek keyboard was my Q9550 HTPC that I moved downstairs, but decided to build the new i7 4790k setup and put the Q9550 back upstairs. I bought a new HAF-XB EVO case for the new setup as I love the look of it and bought Red led fans for it.

I had to remove the top fan when I put the H80i in since it would hit the radiator fan.
I also didn't realize the SB card had an LED on it, I saw red towards the back of the case and thought to myself for a sec, I don't recall installing a red fan at the back, then looked inside and noticed it was the SB card that was lit up, lol.

I game with a G13 keypad so I wanted a wireless keyboard so I could easily move it to the side when playing games.
I went with the Logitech K800 as I have that on my other machine and I like it so I got another for this build.
A


I had the original HAF XB and I got a free EVO chassis after I met the Coolermaster rep at PAX Prime last year after he saw my initial case mods. You may wanna check your temps with and without that top fan as I've seen it screw up case tempatures as a result of the negative air pressure.

And there is NO exscuze to have bad wiring with a case like that, clean dem wires up son!
D

Zepher your setup must stink of stale cigs.


I had the original HAF XB and I got a free EVO chassis after I met the Coolermaster rep at PAX Prime last year after he saw my initial case mods. You may wanna check your temps with and without that top fan as I've seen it screw up case tempatures as a result of the negative air pressure.

And there is NO exscuze to have bad wiring with a case like that, clean dem wires up son!
Click to expand...

temps seem good without it,

This has been my home office/gaming set up for the past year because I been living with my parents until I found a house. I only got 21 more days of using this set up (thank god).
R

Got that same case Zeph, love it!
B

Subscribed. I'm away from my files, I'll upload soon.

Ya, I love it as well. It is a pain to work with though if you are adding stuff underneath with the motherboard tray in place.
I added a hot swap bay under the DVD on the left and had to add another cable to the psu and route it to the left side, it's so tight under there.
J

Why do people 'reserve' places in this thread? Why not just wait until you've taken a picture and post it then? 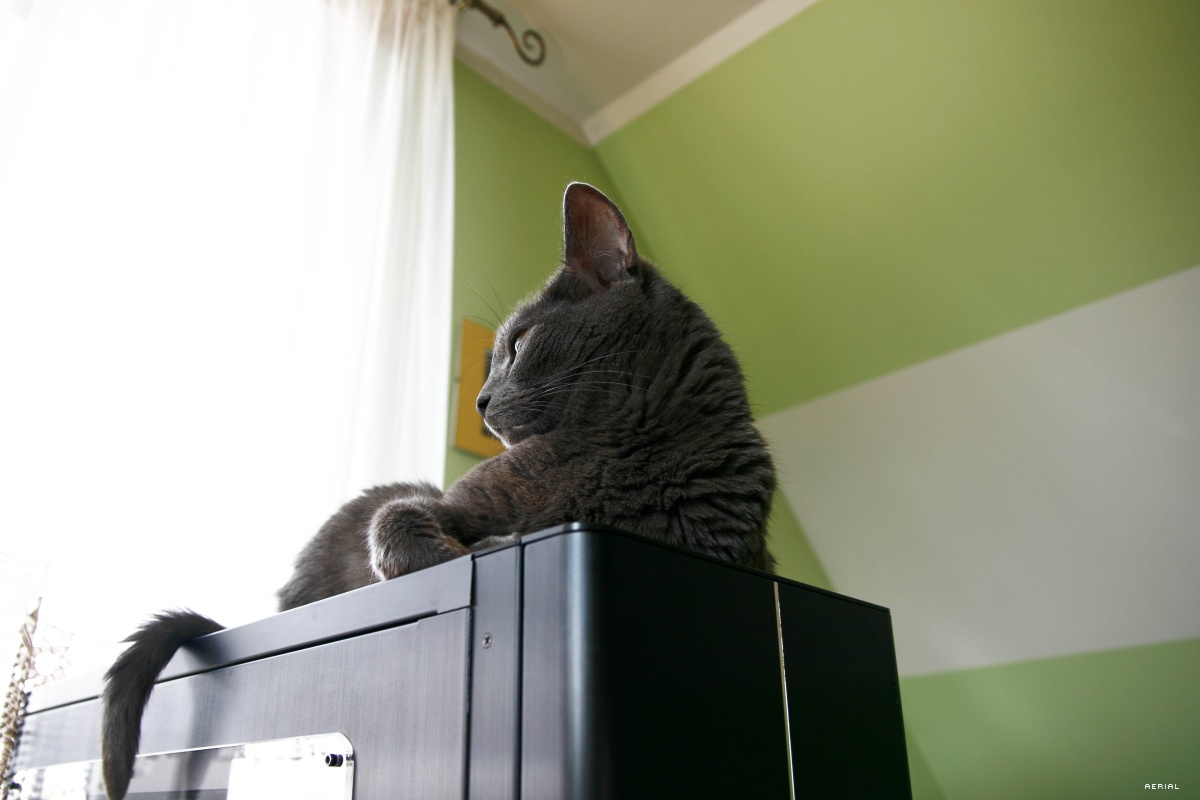 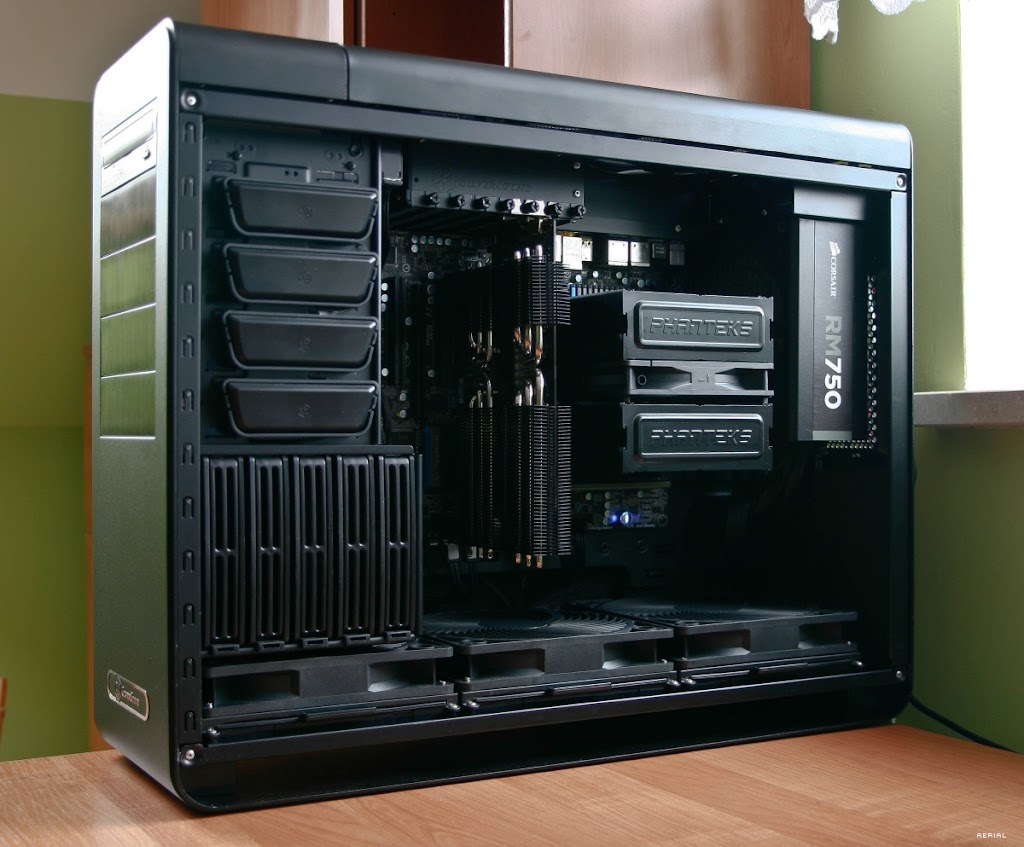 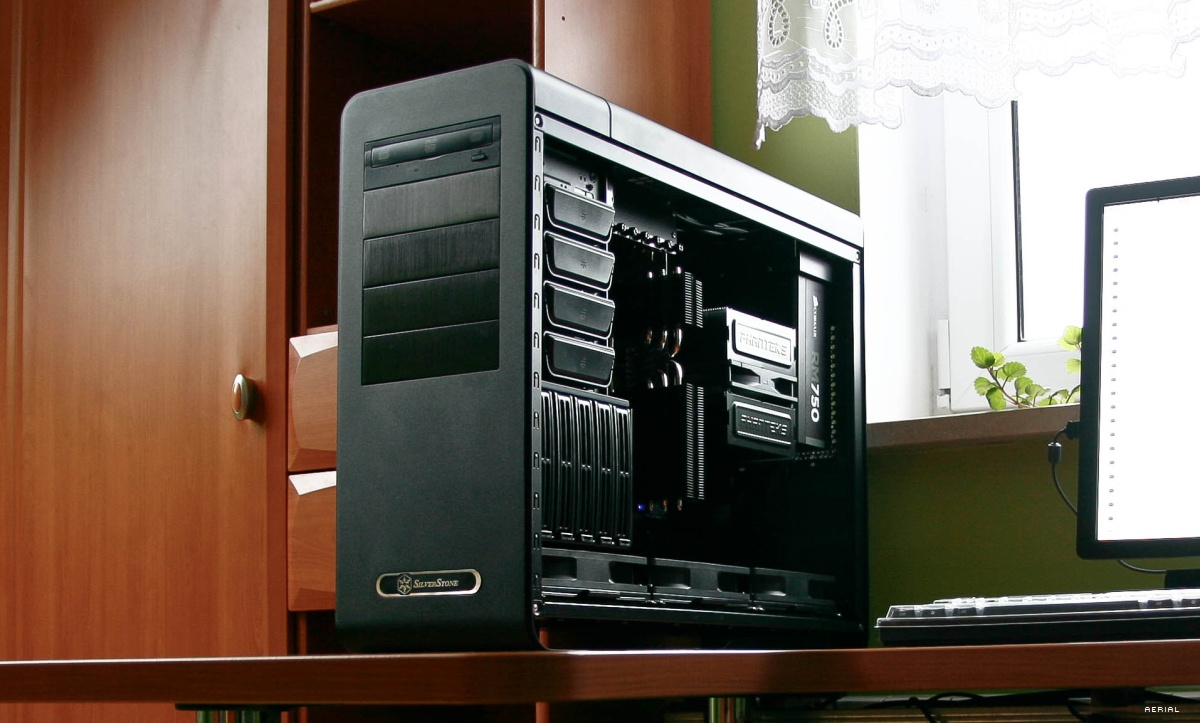 Moved stuff around for 2015. Have a whole new setup coming later this year, including a new PC, desk, etc.

Reserved for more pics later, will also get better pix up.

Awww, we both got case mounters lol

Mine
Matrix screensaver and G510,I'm living in the past I think ahaha

Constantly a work in progress

Wow -- while that setup isn't what I would want in my house -- I think it is badass. Bravo.

I get the feeling if for some reason you lost power -- the nation's internet speed would increase by 20%.
A

What in the living fuck do you do with all that?!

That green! Nice to see a real cave once in a while.
J

Entire office is getting redone this year. This is my old door desk with dual 27' TN's.

Some magic happens in here.

The whole space looks awesome! This just reinforces the fact that I need to get a house someday with a basement to finish...
T

that setup is a little too cluttered for me Trexbob, but I think it is pretty awesome.
I love that large Sun rack enclosure, would love to have one myself.
T

It does look really cluttered. I keep in well organized till I go to build something then it all goes to pot and have to spent a night reorganizing it all.
M

I renovated my workstation little by little over the past year. Cables have some dangle, but are still plenty high enough that I can vacuum and don't step on them.

The aloe plant has been with me for about 14 years now.

I think my next upgrade will be a mechanical keyboard. My setup is super ghetto and dirty compared to some of the pics here.

This is where I view copious amounts of explicit pornographic imagery on a daily basis:

This is my lab where I pretend to work from home: (two hyper-v servers, a domain controller, and a configmgr server)