Need an amp. New little one or a "vintage" receiver?

My setup is a Harman Kardon 10" 200 watt powered sub and pair of Paradigm Atom v.5 speakers. Currently being driven by a old harman kardon AVR144 (40 watt x 2) receiver which I have grown to hate in just the 2 days of trying it. So I have started the quest to acquire something I will hate less.
Thing I dislike about my current avr is that first its really big even though it doesnt put out a lot of power. Thing I HATE about it is that it defaults to FM on every start up. So its like 15 button pushes to get it set to CD optical input (for the puter).

Should I get a little dac and get an old vintage receiver/integrated amp (my sub has high level inputs as well) or go with one of the newer little integrated amps on amazon?
Or is there another option I should be looking at?

Well it's difficult to recommend a specific piece of vintage gear (1980's and earlier), because if you want to go vintage, it's really more about what you happen to find, and what condition it happens to be in.

I think there is a huge bargain at the moment when it comes to "older" AVRs in the 8-20 year old range or so. People buy nice top-end AV receivers and then end up getting rid of them a few years later because of reasons such as not supporting the current version of HDMI, or not supporting any of the newer multi-channel codecs. But none of that matters if you are just using it for regular 2-channel music. "Older" Pioneer Elite models are great in this regard. Most have fantastic amp sections, and the DACs are usually pretty good also.

For example, I have a Pioneer VSX-74TXVi. During testing, it did over 200wpc into 8 ohms while operating in stereo. This was a $1500 receiver back in ~2007, but I picked it up for about $150 a handful of years ago and have been using it in my home theater ever since (I use my HTPC to decode newer codecs, feed them to the receiver via the multi-channel analog inputs, and use the TV itself for video switching, thus bypassing it's two main age-related limitations).

I run a system that is mostly vintage as my main music system, but it's the product of years of hunting for various pieces and building it into the system it is now. If you really want to go that route, I'd suggest keeping an eye out for vintage Yamaha separates. I have quite a few Yamaha amps in my rack and even the amps from ~1976 that have never seen any maintenance their whole lives have still been bullet-proof for me. The older "pro" amps are usually a great bargain, as there is somewhat of a misinformed disdain for "pro" amps, resulting from an assumption that they have bad specs as a result of their intended usage, but most actually have very good specs.
F

I have an old Denon from 2003 that goes with my projector - it does a very competent job. I run it like GotNoRice above with the analog inputs. I generally run self-built tube amps for stereo duties, although my TV uses a little Tripath Class D 12w amp (it's on 24/7 because it's too much of a hassle to turn it on and off and idling it draws less power than a nightlight). The TDA 3116 series of chips seem to do fairly well in non-critical situations, but for some reason they bother me after a few hours. If you can find an amp with the original Tripath chips and only need about 10 watts, I'd go that way.
A

depends on your luck / patience / ability or desire to diy ... used can be amazing (get a can of deoxit if going vintage you'll need it..to clean the volume ..etc other control pots).
There are some downs sides... faulty / failed parts ..repairs needed.. if you need someone else to repair it, it is hard to find a good tech / especially local and a pain in the butt / expensive to ship stuff to someone for repairs.

In my case if have been fairly lucky / fortunate in finding many used amps / receivers within the budget you state.. 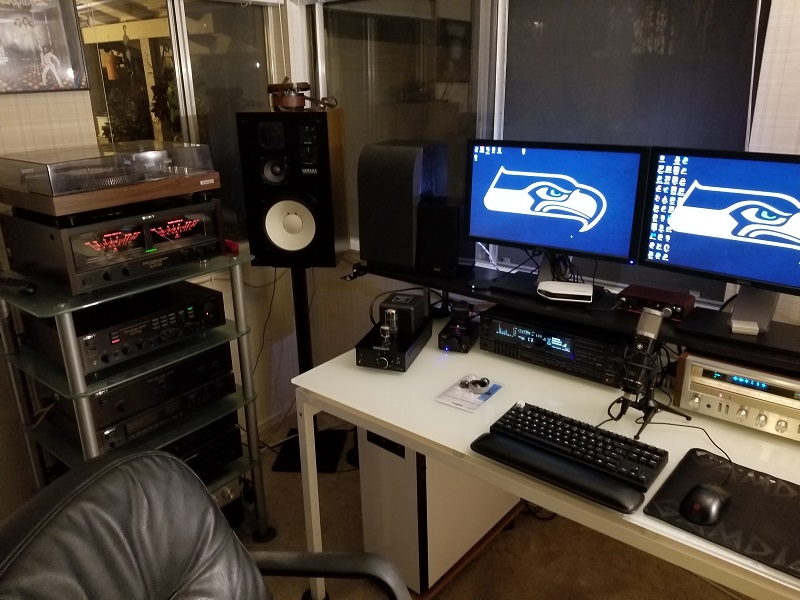 also in the picture are some more "reasonable" used scores a $20 Kenwood KR-V106R (100WPC) and a "beautiful" Pioneer SX-3600 $80~ it is a modest 30WPC but those are FTC Watts not bs t-amp 10% distortion watts .. it will get the job done for most things especially in a desktop audio setting.