I'm using MSI Command Center to set a real basic cpu temp/fan speed plan. However my cpu temps will jump around in ~5-10c increments, cause my fan to fluctuate enough to be noticeable (the fans themselves aren't very loud, a few hundred RPM difference, but it dips above and then under a noticeable sound threshold.)
Is it a problem with MSI Command Center's polling? Is there an alternative I can use for cpu fan control? I'm using a coolermaster AIO 2x120.
R

Set the fan curve for a higher temp and set the "step up time" Higher so the ramping is much slower to the faster temp responses. Its normal for the temps to jump depending on specific load. Also set your power plan to balanced so it has a chance to idle. Ryzen balanced can be a little aggressive on certain loads.

yup custom fan curve starting after the blip in temp. on my 2600x i set it flat at 25% until it hits ~50c then 100% for 75C. that why the odd little blips are ignored until there is a sustained temp increase.

in original question, no you cannot change sensor temp polling for fan speeds that are (not really controlled) by msi command center. 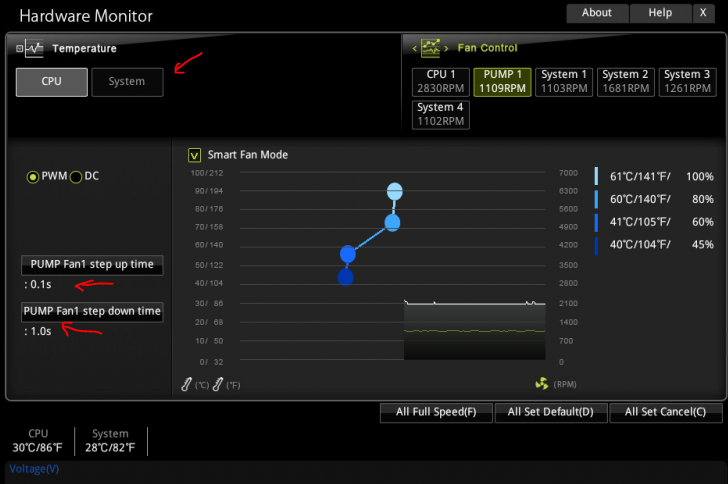 those settings will actually change the polling - give you control on how fast it updates the fan curves, temps etc.


Tho keep in mind - its likely bugged, and not working correctly.
(I have x470 msi gaming pro carbon - i can play around later today once i'm home if you need some additional help)

I personally keep my build at static fans at 40% until certain threshold of 70'C is reached then go 100%
(in typical op i would never reach it - once my pump died the fans ramped up - which was a good alarm for me something is wrong.)
Y

I usually set the base where it's next to silent, or at least hardly audible, the +/- 10c leads to a lot of revving up and down. The fans seem quite a bit louder per RPM than my others, but I suppose I have to account that it's blowing into a radiator. I could find the options to change the step-times but I did use your suggestions of plateaus. The fluctuations seem to be more in MSI CC than in other things - in the Ryzen OC app it only fluctuates like 50% (1-5*C) compared to the 5-10*C. Anyway thanks for the help guys!
J

I set my curve flat for my AIO and it starts to ramp up after 55C and full blast after 70C. Keeps them quiet for normal day to day, can not tell gaming because I have a headset on. I have the ramp up/down times set up as well so it does not shoot up for minor blips above 55C. I keep them at 40% under 55C. I can hear them because I have a 280 AIO with 2 140mm fans but they do not change speed so it is acceptable to me. My case fans are on a normal curve that does not go 100% until 75C on the CPU Temp.
You must log in or register to reply here.
Share:
Reddit Pinterest Tumblr WhatsApp Email Link
Top