So. Due to this whole situation, I bought a bunch of computer parts as a badly needed upgrade while I was waylaid at home, and long story short....turned out that these upgrades were too much for my trusty old APC ES 350 UPS (200W load max). Kept overloading when playing games.

So I got a HP T1500 G4 UPS for a great price. Enterprise level UPS for less than cost of a cup of coffee? Bought 3 brand new batteries, and now I'm in business and in love.

Only....I forgot that enterprise customers don't give a fuck about a little noise. This UPS is very noisy indeed, fan runs 24/7. Given that my computer is less than 5 feet away from my bed, that's a problem.

So, does anybody have experience with HP UPS, are they mostly universals? Can I slap in any Noctua 80mm fan and it will be plug in, or modification required?

Does UPS monitor temps and ramp up the fan as necessary? Could I swap thermal paste and expect improved thermals?

I'm a little out of my comfort area here -- I tend to shy away from modifying PSU's and UPS's that are connected to my computer for obvious reasons.

I've replaced fans in APC units before and the problem I ran into is they often used 24/48V fans, rather than the common 12v used in computers. The sizes are the same, so what I did was use a buck converter to drop the voltage down. For 24v fans, an LM2596 buck converter commonly found on Ebay/Amazon work. For 48v fans, I had to use an LM2595HVS, which has an input voltage rating of up to 53v. It's easy enough to put the buck converter in line with the fan, just cut the lead in half and solder the four wires up. For mounting it, I usually just hot glue it to the fan body. You can drill, tap and install standoffs inside the unit as well, but there's that issue of metal shavings floating around... You can't get them all out.

If this is the back of your unit: 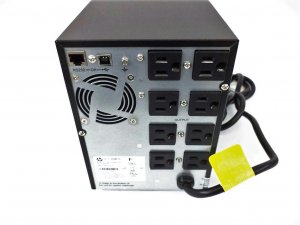 I'd recommend using tin snips to cut the restrictive grille for the fan out, which looks to be just four small sections of plate. Restrictive fan grilles not only reduce airflow, but also contribute to noise since the fan spins faster than it otherwise would normally due to less of a load being on them. You can either not use a grille at all, or get one of those screw on wire mesh grilles when you install your new quieter fan.

For fan and thermal monitoring, depends on the UPS. Some run at constant speed, some use fan curves in response to heat. I have a few of each type.

As for thermal paste, you don't really want to mess with that. The power transistors/mosfets are usually in a TO-220 package, where the heatsink is actively part of the circuit. Some are isolated with mica spacers which are critical to prevent the transistor/mosfet from shorting to the heatsink and going bang. Most competently designed UPSes will have proper thermal paste and heatsinks, so it's best to leave them well enough alone. I have however encountered Cyberpower units which did not use thermal paste, or even heatsink heavy power transistors which have blown up or shorted when the unit was first loaded, so it'd be a good idea to at least inspect the power transistors/mosfets and their attachment solution to their heatsinks.
D

These are fantastic news indeed, awesome!

Would the stock fan have any sort of sticker signifying input voltage (as in, have you seen that in action?) Or would I have to put a volt meter to the wires with the UPS disassembled and hope I don't short myself?

Good idea on the grille cutting, and yes that's the back of my unit. As you say, I could easily cut out the whole grille and use one of those wire mesh thing that were all the rage back in 2000's.

Never even thought that they could use thermal paste as an active part, not just passive. So basically they would install thermal paste to act as an insulator so there's no continuity between multiple circuits, but still be able to transfer heat?

Shouldn't that depend on the mosfets design? Most mosfets have the drain on the middle pin and the backing plate, so each mosfets drain diagram has to be isolated.... But I've seen many PCB with dozens and dozens of mosfets all sharing the same drain (all of their backplate were soldered on a common surface) but still served multiple circuits. My car ECU has that design. So perhaps the backplate would be ground and not drain, in that case?

Tomorrow I'll open up the UPS to see what I'm working with.
G

Deluded said:
Would the stock fan have any sort of sticker signifying input voltage (as in, have you seen that in action?) Or would I have to put a volt meter to the wires with the UPS disassembled and hope I don't short myself?
Click to expand...

Fans usually have the voltage specified on the back label, if not, the model number can usually be looked up to see what voltage it runs at. If all else fails, you can just measure it with a multimeter.


Deluded said:
Good idea on the grille cutting, and yes that's the back of my unit. As you say, I could easily cut out the whole grille and use one of those wire mesh thing that were all the rage back in 2000's.
Click to expand...

No idea why they ever stopped using them other than maybe cost. Some case designs have such tiny holes for the fan that it makes the fan effectively useless.


Deluded said:
Never even thought that they could use thermal paste as an active part, not just passive. So basically they would install thermal paste to act as an insulator so there's no continuity between multiple circuits, but still be able to transfer heat?
Click to expand...

Like in most SMPS designs used in ATX power supplies, you never want to touch the primary side mosfet heatsink while it is powered because it usually has ~375V high frequency AC on it.


Deluded said:
Wouldn't thermal pads do a good job of that in that case? Maybe buying thermal pads in bulk and use them? Actually do thermal pads even come close to thermal paste in performance?
Click to expand...

Thermal pads almost always offer worse performance than thermal paste. The heatsink and device are farther away with less contact due to surface roughness. I've seen some pretty poor thermal pads over the years, some that even looked like woven tarp material.
You must log in or register to reply here.
Share:
Reddit Pinterest Tumblr WhatsApp Email Link
Top