I have a cheapo Thermaltake case for a workstation and it has horrible airflow. I want to cut out the middle portion of the front panel leaving just the perimeter, a rectangular frame basically. Then I plan to stretch some sort of black mesh fabric over it to make it like a crappy diy Meshify C. Most mesh sold for pc's is small, expensive and fan sized, not case size. Typical fabric from sewing/crafts suppliers is too dense not like open mesh. I guess maybe fiberglass/plastic window screen material would be good? Though that mesh tends to be pretty wide, I still want some filtering of dust. Anyone have suggestions on a good, cheap material?
T

Hahaha wow hadn't thought of that. I guess it'd be good, seems like it might be too fine? will it tolerate being cut without fraying and falling apart?
T

Not sure, I've never used it myself. Haha. I've special ordered a demci filter. It works real well. What case is it? Just curious.

I've also bought some filter material off of moddiy.com
E

Thermaltake h17 matx case. It has some perforated metal around the edges of the front panel but it's actually closed off. I realized the metal was for looks. So I cut out some of the plastic behind the metal using a dremel and it can get a little air through that now but it's still struggling to move a huge amount of air considering it's got 2 noctua 140's up front at like 70% max rpm.

So I figure f*ck it I'll just cut out the entire middle portion of the front panel.
T

Getting a new case will look better.
E

THUMPer said:
Getting a new case will look better.
Click to expand...

OH for sure but any funds are being dedicated to some used enterprise SSD's. I figure some filter/mesh is the cheapest option. This purely needs to be utilitarian, not pretty

You can get rolls of grill fabric on amazon ya know.

Think I found what I plan to use. I thought about speaker grill mesh but worried it was too dense/fine. This one has three separate layers, coarse mesh, foam, and fine mesh, so I can have as much or as little filtration as I want. $9 too. Not bad. Any more than that and I'd be spending too much. This case was $36 new

You could try get normal metal mesh at hardware stores or workshops, they usually sell it by meters but it's cheap. There are different "styles" but the most common has a 1/8" holes pattern.

luisxd said:
You could try get normal metal mesh at hardware stores or workshops, they usually sell it by meters but it's cheap. There are different "styles" but the most common has a 1/8" holes pattern.
Click to expand...

1/8" holes are not going to filter much. it needs to be down to like 1mm or smaller for it to filter properly. 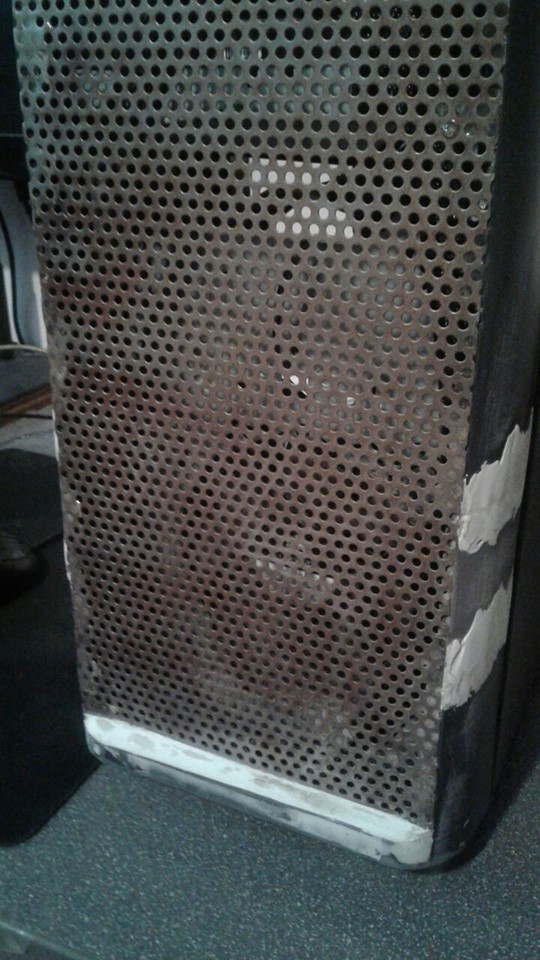 looks fine but its not really filtering anything. might catch a bit of animal hair.
E

Well that was the best $8 I've ever spent. Cpu temps dropped 20C. Astonishing. Doesn't look like a total dumpster fire. Doesn't look uber professional either but damn it is functional. Case fans are actually quieter now too even though they're all running at the same rpm there's much less turbulence now that the air is mostly unimpeded.

Case kind of looks like a speaker now lol.
T 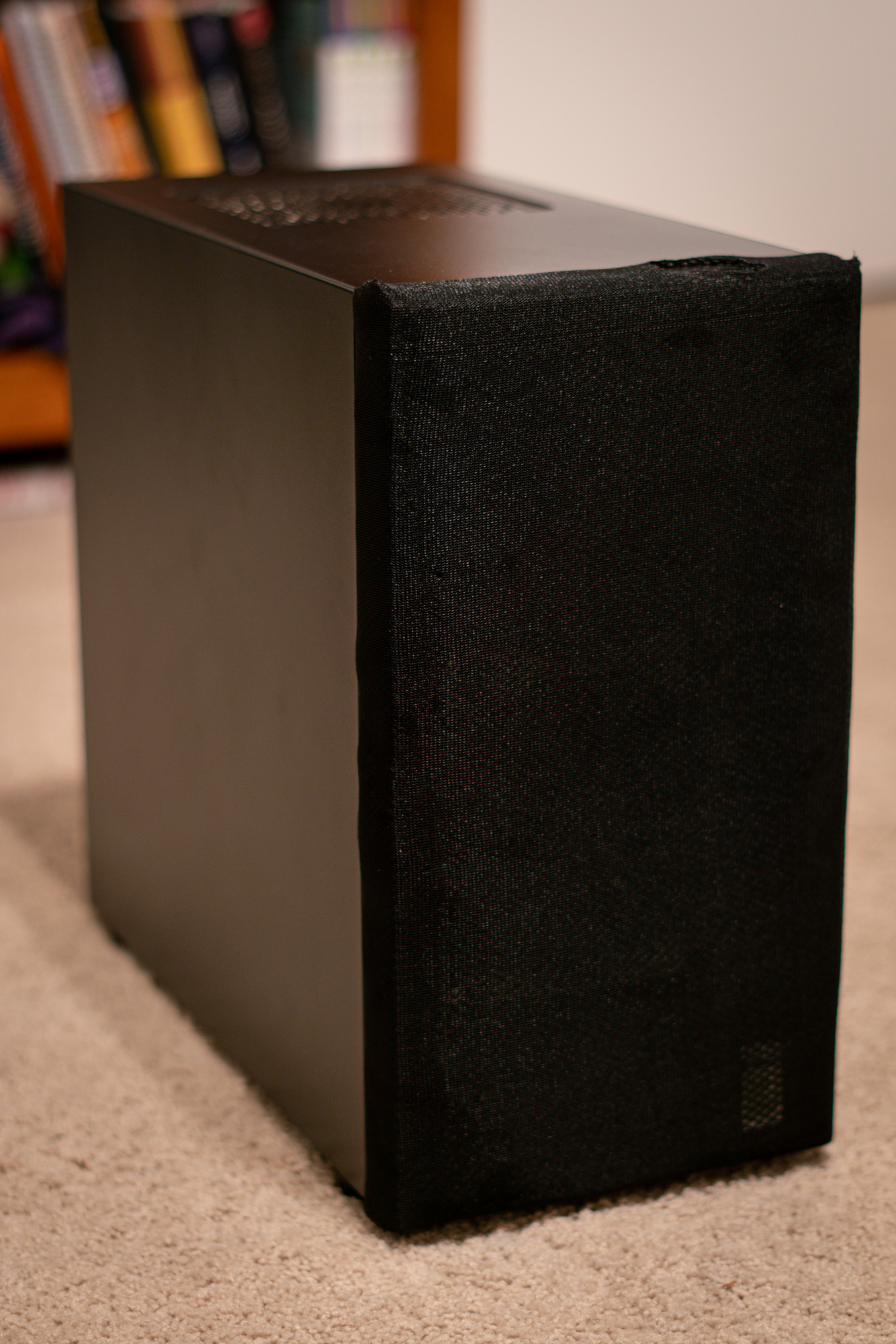 Almost forgot about the front i/o also tried to singe the corners with a lighter to melt it down a bit so it's not sticking up. it's easy to melt as its polyester. But it started melting more than I wanted so I gave up on that endeavor. 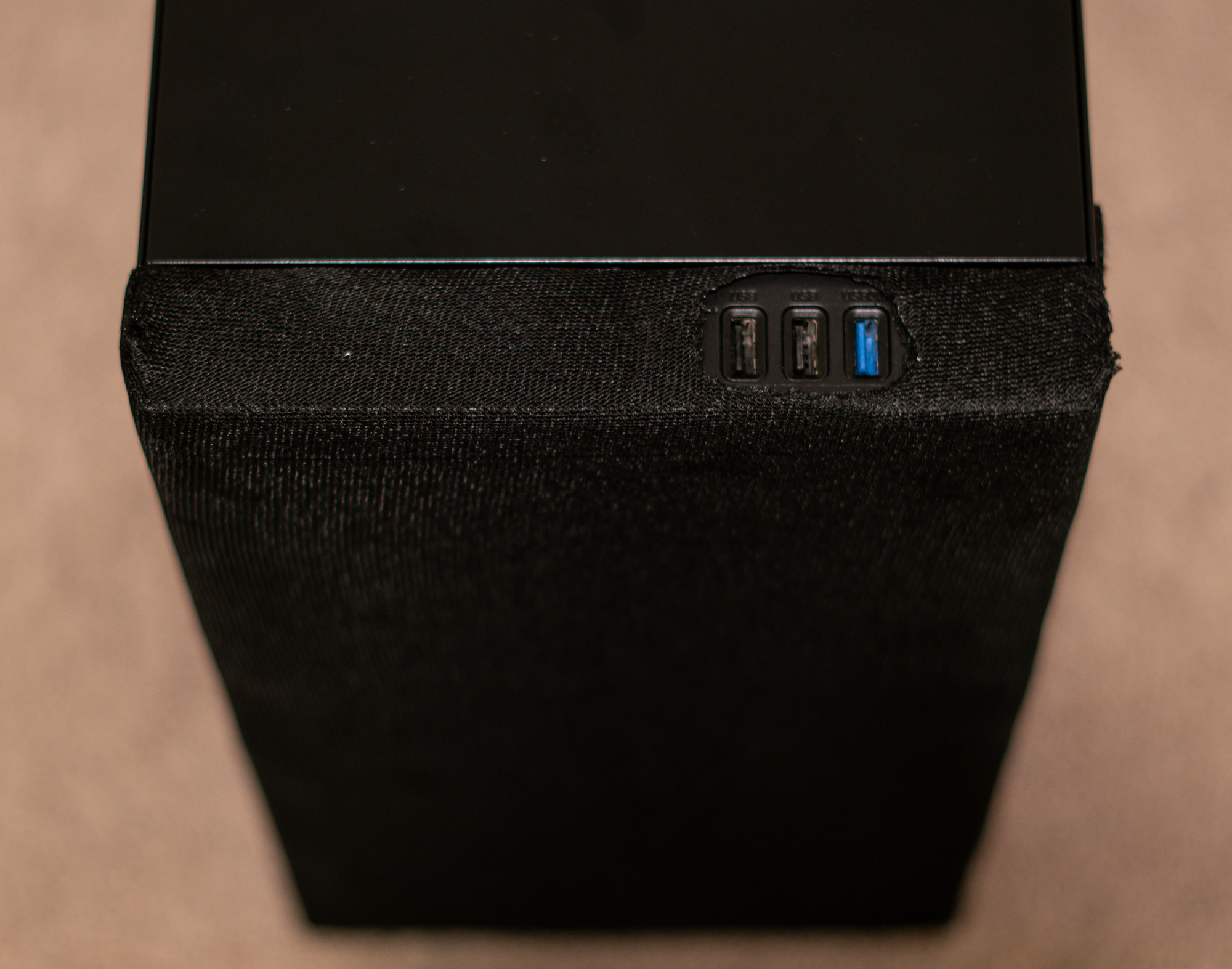 Roughly this much is cut out 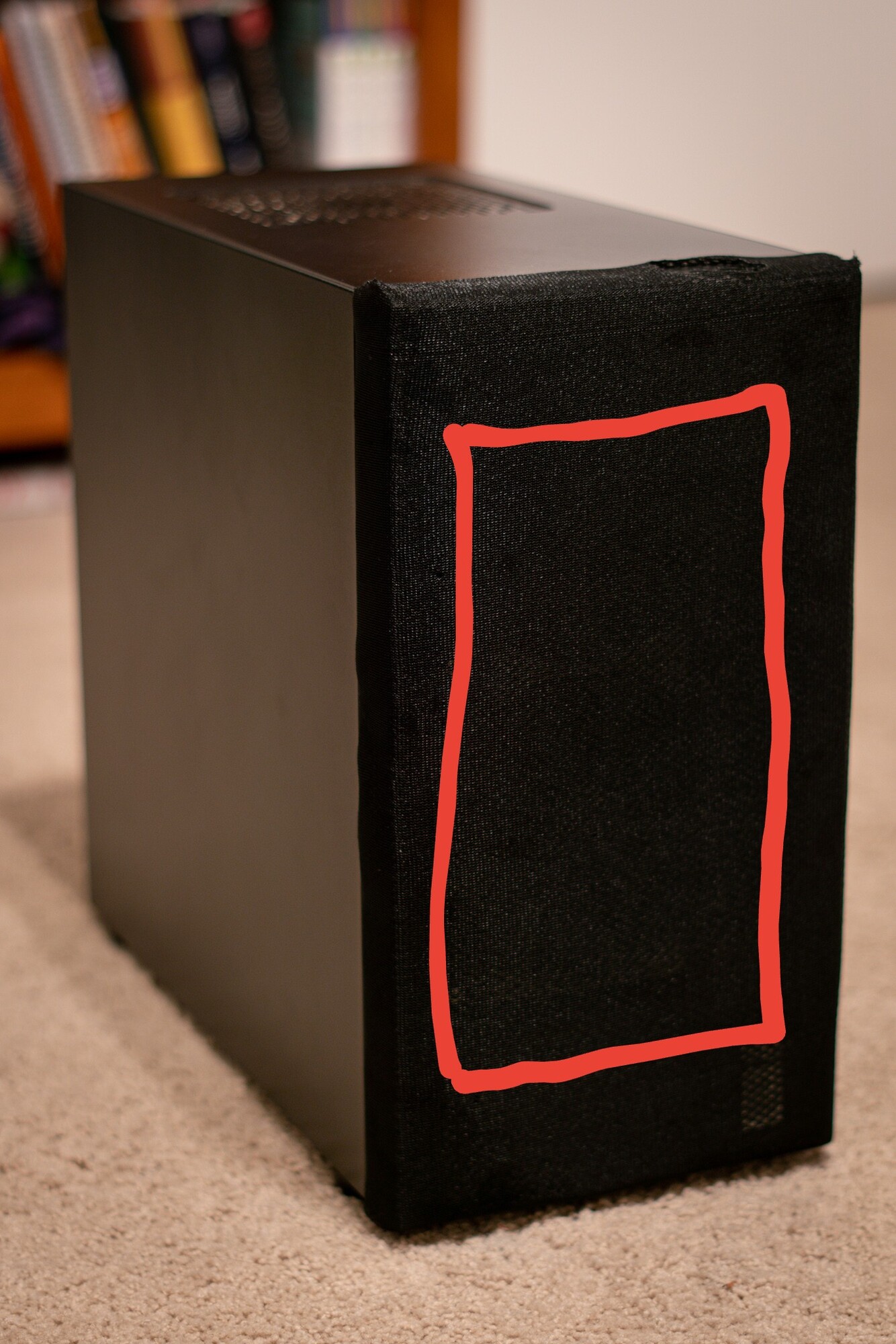 I was worried the speaker fabric would be too thick but honestly it's pretty cheap fabric so even though it's thick the density of the weave is super low so no problem at all. Basically wide open front now, but filtered. 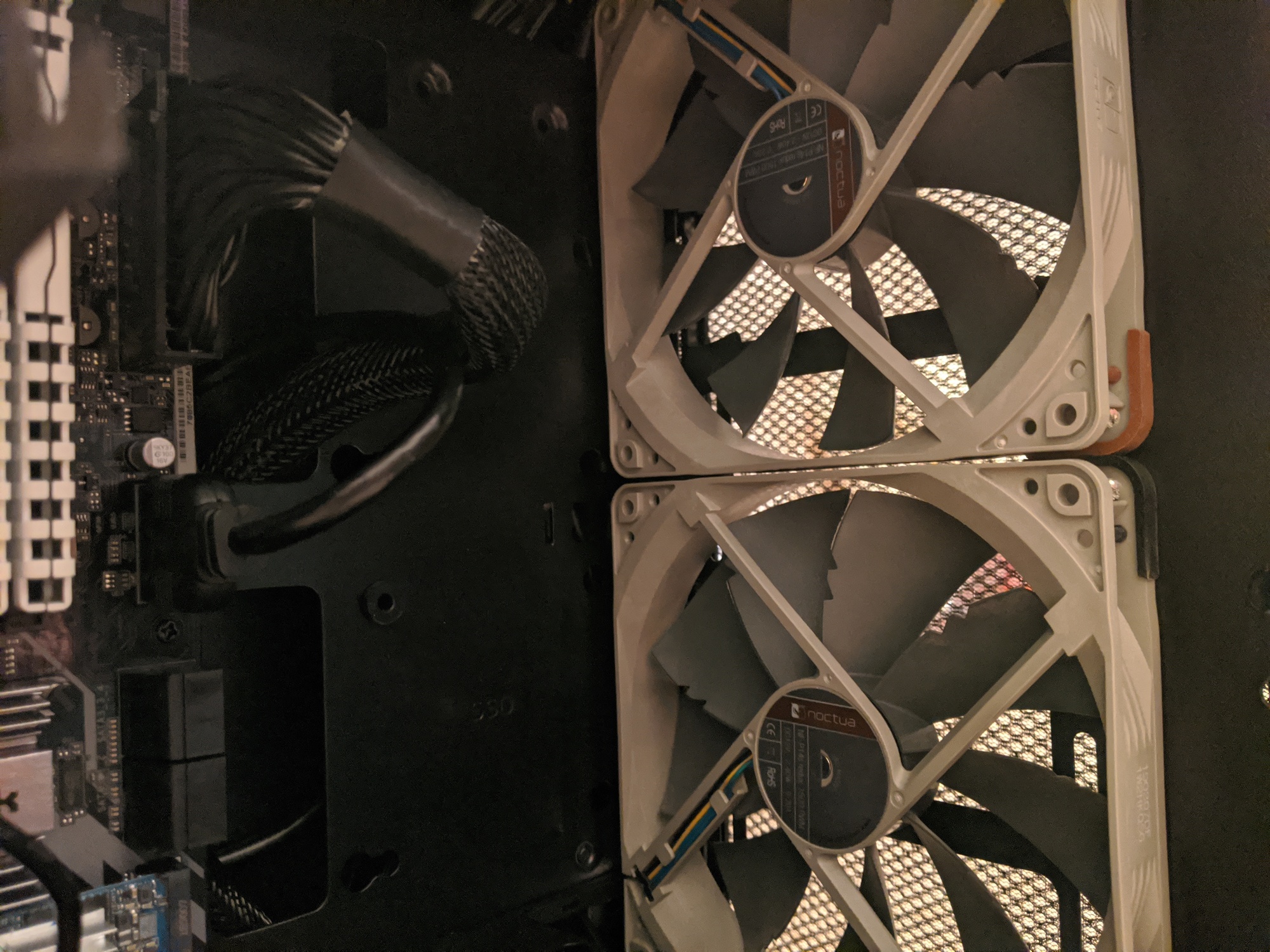 Meant to take pictures of the "mod process" but honestly I figured you all can imagine cutting out a huge rectangle with a dremel. Stretch fabric over remaining frame and super glue the fabric around the edges. Not terribly interesting.

I was super close to just giving up on this case and getting a meshify C, but that's about $100. Yeah it's a better case but this was also just $8 to fix this one. Can't argue with just $8.
E

For anyone interested I ended up using this particular fabric

I'm sure if you took your time, you could actually make it look quite good versus my utilitarian approach. It's available in several colors too so that's cool.
T