Hey at the office they want to get a bunch of these and I need to know if the USB cable can actually operate the keyboard and be used as wired option. The reason I'm asking is often the truth has been half assed and I don't want to find out the hard way all the USB cable does is charge it. Or maybe there is another complication where the RF transmitter still needs to be plugged in to work with conjunction with the cable. Plus I need to be able to get in UEFI / BIOS etc which is something wireless keyboards can't due Windows loading the drivers...
I just need a more versatile option and so far between the Microsoft Modern with Finger Print ID and the Logitech MX Keys, this one seems the better choice. I hope somebody can 100% confirm this for me. Thanks

I have and love my MX keyboard! It can be used wirelessly or with the USB cable. One tip - if you turn off the backlighting, the battery lasts a helluva lot longer. It's a great keyboard.
D

Hey I came to say thanks but.....problem. Are you really sure this keyboard can be used wired? I think you should re-read what I'm asking again because I have received mixed opinions on this subject. I won't say more as I want to hear your story first. Here is what you said " I have and love my MX keyboard! It can be used wirelessly or with the USB cable." I will give you the benefit of the doubt and expand further. I'm not asking if the keyboard when paired with the USB RF receiver (connected wireless) can be used with the USB charging cable simultaneously. What I want to know is if you throw the bluetooth and RF transmitter in the trash and then plug the USB cable to your motherboard port...will you see letters when you start typing?

We are talking about the new Logitech MX Keys keyboard that came out few months ago. Try it and get back to me.

This is the MX keyboard on my desk. I can use it wirelessly or while the charging cable is connected. 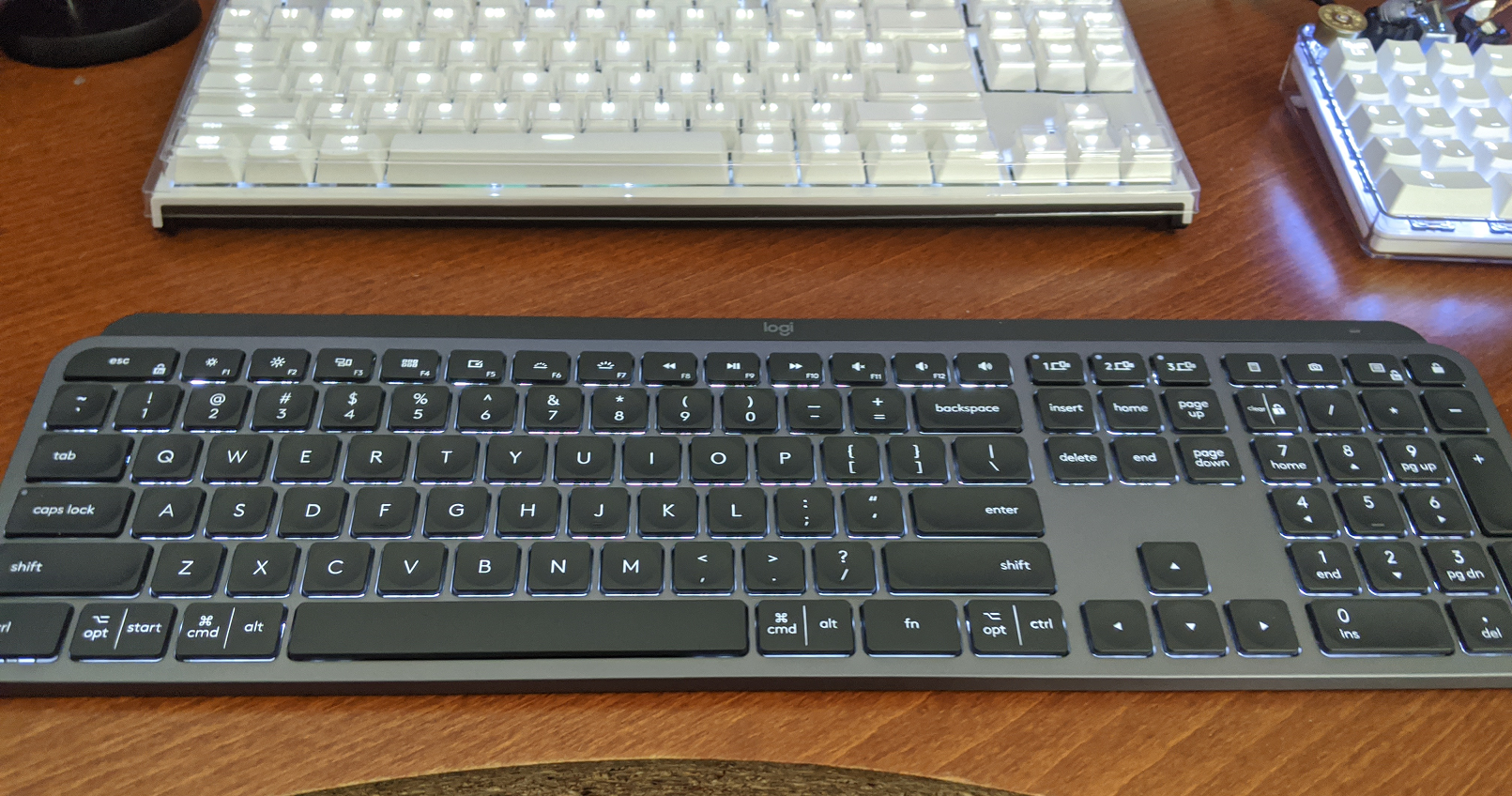 Ok that's strange because meanwhile I reached to coupe of reviewers and both confirmed once they unpaired the keyboard, then tried with the USB cable, it will not communicate. Same thing with a person who had experience with both Microsoft Modern Keyboard and now the Logitech MX Keys, mentioned the MX doesn't work with USB cable like the Microsoft version. Certain comments under YouTube have said the opposite and agreed with you Shepard. So finally I managed to figure out Logitech has indeed a LiveChat and after asking a guy he said the USB C is only used for charging, I even asked if he can confirm this and he put me on hold for 5min (I doubt he went to try the keyboard, most likely ask his staff manager to be sure the answer he gives is not false) and after he came confirmed it's just a charging cable.

So you see why it's confusing the hell out of me after doing some researching in the past 24 hours. I guess only way to find out is to get it through Amazon and return it if that's the case. That is unless I find a better alternative. I honestly don't want to deal with the proprietary connectivity issues that are both present on the Microsoft and Logitech (especially judging by Logitech forum on the MX bugs). The USB cable would have avoided most of my concerns.

Okay, I see what you meant. Guess I misunderstood your issue. I thought you were asking if the keyboard was usable while attached to the USB cable. However, you're right. The USB cable is not an option for connectivity. It's just for recharging.
J

If you don't look for the lighted keys and don't want battery charging, there is the K780 with normal batteries that last very long. It's quite compact but heavy and very comfortable. I recommend it even if it's only a little cheaper than MX keys. Same for M720 Triathlon with battery. Better than MX mouse. All those are multi-device.
You must log in or register to reply here.
Share:
Reddit Pinterest Tumblr WhatsApp Email Link
Top