Kids Got it Easy Nowadays

'Member when downloading music was not only a PITA but could put you in jail? It's funny because everything he says is true. Thanks cageymaru. Now get off my lawn.

Check out the video.

Oh lord. Limewire. I gave up piracy years ago and I'm happy I did. More headache then it's worth.
K 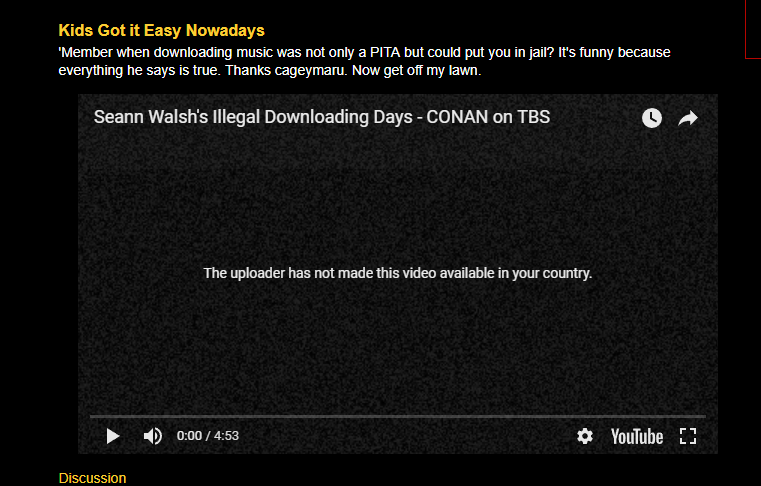 Only pirates get these jokes. EVERYONES A PIRATE!
T

That was pretty spot on of my tween years.

This guy trying to be funny, but he's just telling people how it really was. It was funny but also a little sad, too. "HAHAHAHAHAHAHA!!!! Shit, that was real, tho."
M

DukenukemX said:
Only pirates get these jokes. EVERYONES A PIRATE!
Click to expand...

piracy is much easier these days, with all the fast file lockers.

and no one actually went to jail for this
C

That is about right. I used Napster, Limewire, and Kazzaa (is that last one right?) some. I mainly used FTP servers and some Fserv on mIRC.
Anyone remember the website Audiogalaxy? It was great for finding FTP servers.

It is much easier just to purchase things legally now, which I am glad. It is safer, and I do not mind supporting what I like.
A

I unfortunately buy all my music. Fuck you morality.
K

Man, I hated those early days of video piracy. 500 meg download for a movie that was like 320x150 pixels and absolutely horrible quality. Which you had to delete, cause you didn't have all that much space on a 5 gb hdd.

I must be really old, Usenet, is where it started for me via a Unix slip account. No need for AOL or Prodigy. Never used Napster or Limewire. Did use and still use IRC and usenet -alt.2600 is still my hangout. Than again, there was no "WWW" back in the good old days. Altivista you say , I say Gopher.

The comments here were funnier than the video.
Z

krotch said:
Man, I hated those early days of video piracy. 500 meg download for a movie that was like 320x150 pixels and absolutely horrible quality. Which you had to delete, cause you didn't have all that much space on a 5 gb hdd.
Click to expand...

500MB really isn't that terrible for a feature length film. I've got a bunch of films released on 500MB PSP discs and they look great. You're probably just spoiled by the ultra hd and master audio thats on modern home releases.

as if there wasn't a better example than this.
K

ZodaEX said:
500MB really isn't that terrible for a feature length film. I've got a bunch of films released on 500MB PSP discs and they look great. You're probably just spoiled by the ultra hd and master audio thats on modern home releases.
Click to expand...

Hardly. You can't compare today's technology to technology back in 2001-02. Compression technology was crap during then. Not only was the video resolution size tiny, it looked worse than a VHS tape. So you'd leave the video at it's default size and view it or maybe even shrink it down a little more to make it a bit clearer. Be like watching a VHS tape on a postage stamp sized screen. That or you'd full screen it and moved as far back as you could in your room and just deal with the bad quality. It was free, so people just dealt with it.

Then take into account download speeds. I was on a 56k connection that only connected at 28.8k. If I got full 28.8k download speed and didn't do anything else on the internet, it would take me 39 hours to download that 500 meg file.

It was also the lovely time of dealing with mov, asf, ra, rm, etc files and needing tons of different codes to play it and you had to install those codecs in a specific order. Then came the K-lite codec pack, but you'd still need 1-2 different codecs installed afterwards, as they were broken in the codec pack.

By 2004-05, when the PSP came out, technology quickly advanced. You could have video quality that was inbetween VHS and DVD at that point for 500 megs. Why it'd look great on something with a small screen like a PSP. Even today, I'm still dealing with lower quality things. I just got my dvd box set of Swat Kats in the mail and ripped them last night.

The best quality stuff I got during the 2001-2002 era was anime videos. 300-500 meg files of a single 22-25 minute episode. Comparable to a VHS tape. I'm thinking that was more due to how crappy TV was, as everything was a tv capture.
You must log in or register to reply here.
Share:
Reddit Pinterest Tumblr WhatsApp Email Share Link
Top