Meh, why is intel even hyping it at this point?

"The prototype 2-core/4-thread "Tiger Lake-U" processor with Gen12 graphics yields a 3DMark FireStrike score of 2,196 points, with a graphics score of 2,467, and 6,488 points physics score. These scores are comparable to 8 CU Radeon Vega iGPU solutions. "Renoir" tops out at 8 CUs, but shores up performance to the 11 CU "Picasso" levels by other means. Besides tapping into the 7 nm process to increase engine clocks, improve the boosting algorithm, and modernizing the display- and multimedia engines; AMD's iGPU is largely based on the same 3-year old "Vega" architecture. Intel Gen12 Xe makes its debut with the "Tiger Lake" microarchitecture slated for 2021."

I'm not surprised. AMD knew Tiger Lake was coming later this year, so they customised that Vega APU to be around 50% faster than Ice Lake. 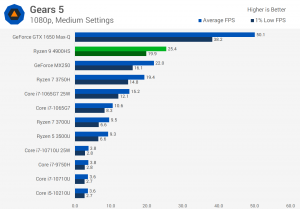 It wouldn't surprise me if 96 units / 64 units = 1.5x speedup. More importunately, there's nothing Intel can dio about those 4 missing CPU cores!

And, it's going to be at-least six months from leaked scores to retail availability. The first leak of Renoir APU performance was back in October:

Conclusion: AMD has the rest of the year's APU notebook design wins to themselves!
Last edited: Apr 17, 2020
You must log in or register to reply here.
Share:
Reddit Pinterest Tumblr WhatsApp Email Link
Top