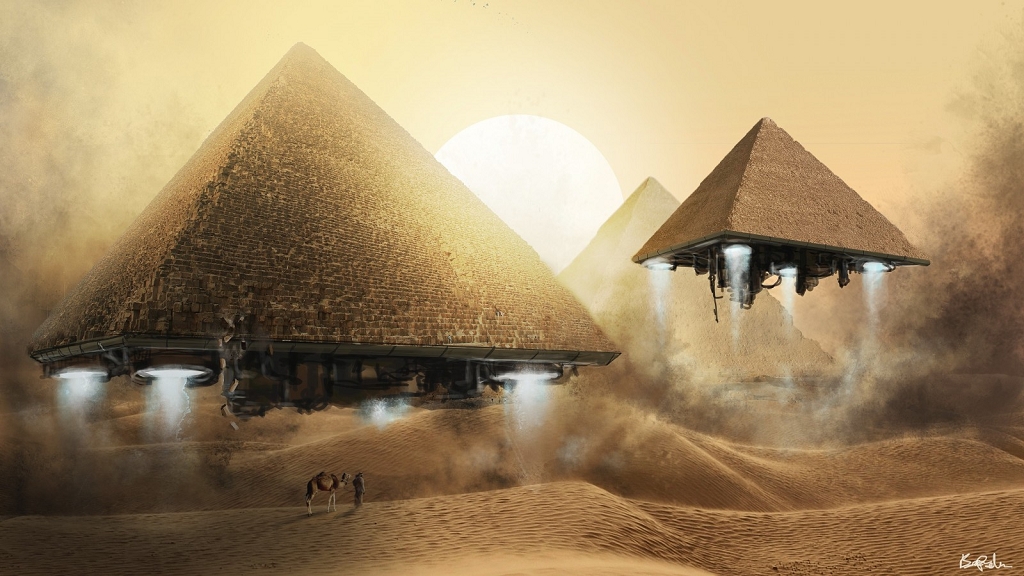 "The Pyramid of Cheops is the oldest and largest of the three pyramids of Giza and is therefore also known as the "Great Pyramid".
The tallest pyramid in the world was erected as a tomb for the Egyptian King Cheops, who ruled during the 4th Dynasty in the Old Kingdom (about 2620-2580 BC) .... "

A theme can not be more beautiful, as the title image already reveals you can guess what I'm referring to it


Welcome to my next project"Cheops"

...is to become a true-to-scale replica of the Cheops pyramid.
In this concept, I will work with gilding and lime sandstone techniques.
Upwards, the whole thing will then slowly pass into transparent glass, to gain a direct insight into the burial chamber,
Which of course is disguised with hardware.
Likewise I would like to see later a sarcophagus in the burial chamber which presumably enthrones the Hardware.

Mostly Styrodur and Plexiglas are used here.
I will gild with 24K gold leaf.
For the lime sandstone technique I will work with quartz-containing paint and glazes.


Since I have been carrying this idea with me since 2015, a lot has changed in the overall concept, but I do not want to go into the details.
I definitely want to show you my progress as soon as possible,
since in 2015 I already started working with some of them and now I got really into the project just before Christmas.


Currently I'm still looking at what hardware is eligible but I keep you up to date.
​
C

Apart from a few missing dimensions or angles, my highest priority was the glass pyramid.
Because gluing Plexiglas was not one of my strengths to date.
After I was able to detect the missing angle by means of a tiny origami pyramid, I first created a small wooden pyramid
and then I tried the Plexiglas gluing.
The experiments were certainly not optimal and were far from perfect, but I knew what I have to pay attention to later
. 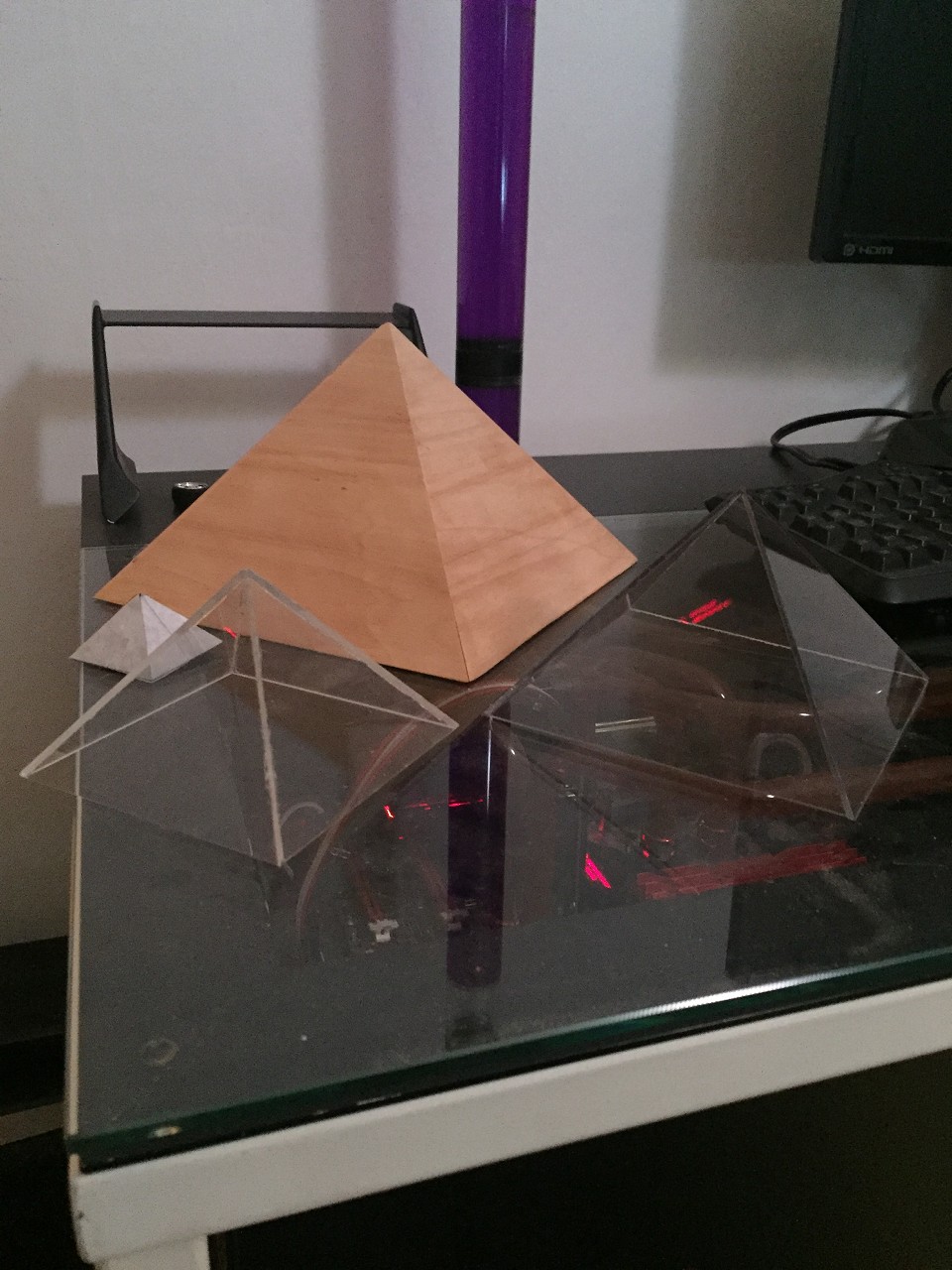 Now I bought Styrodur in 20,30 and 40mm thickness and built myself a small styrofoam cutter,
which I already discussed in the Worklog Al`Kesh.
The 30 and 40mm Styrodur I now cut into different sized cubes. 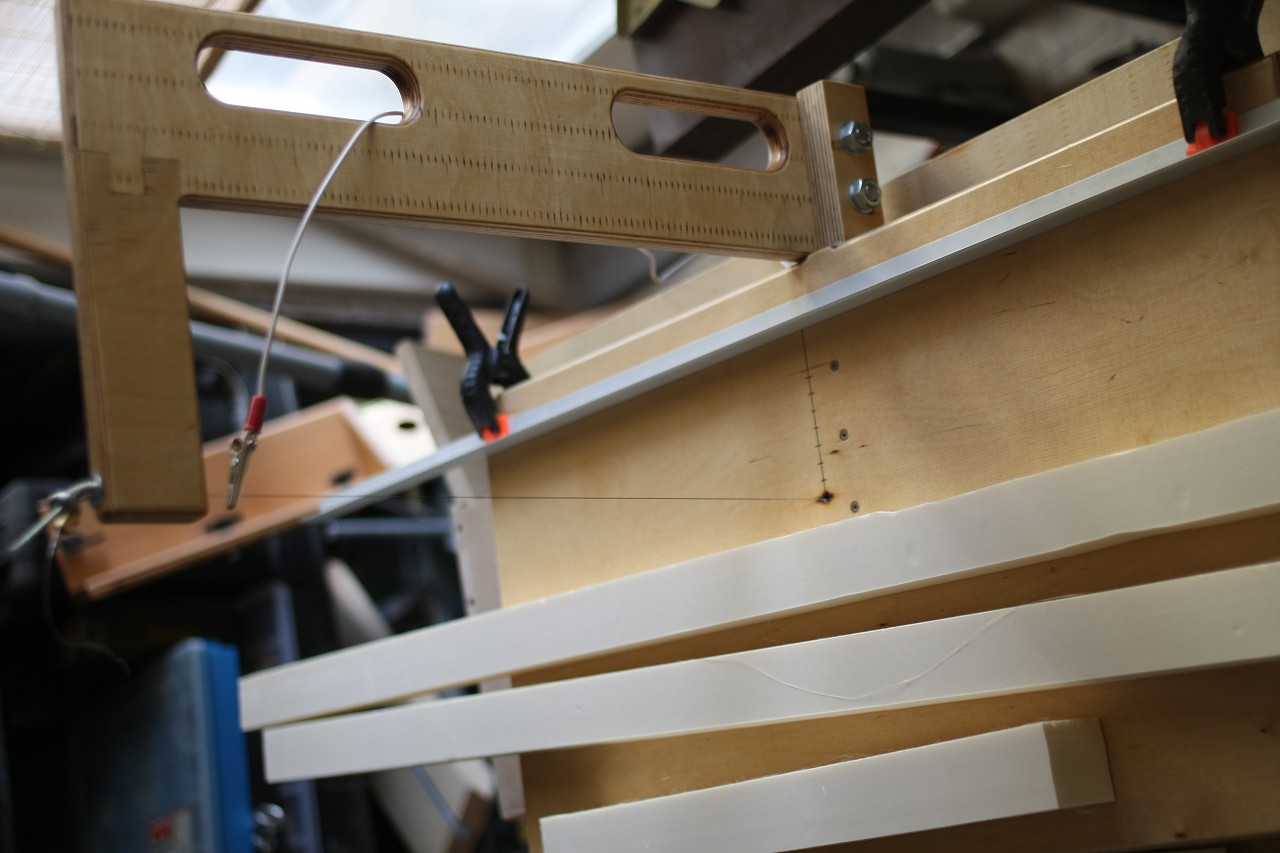 As a foundation for the glass pyramid, I decided for 4 stages.
The bottom one is 40mm high, each additional 30mm.
For that, I drew each floor on my countertop and began haphazardly, cube by cube, but within the markers,
to stick together. 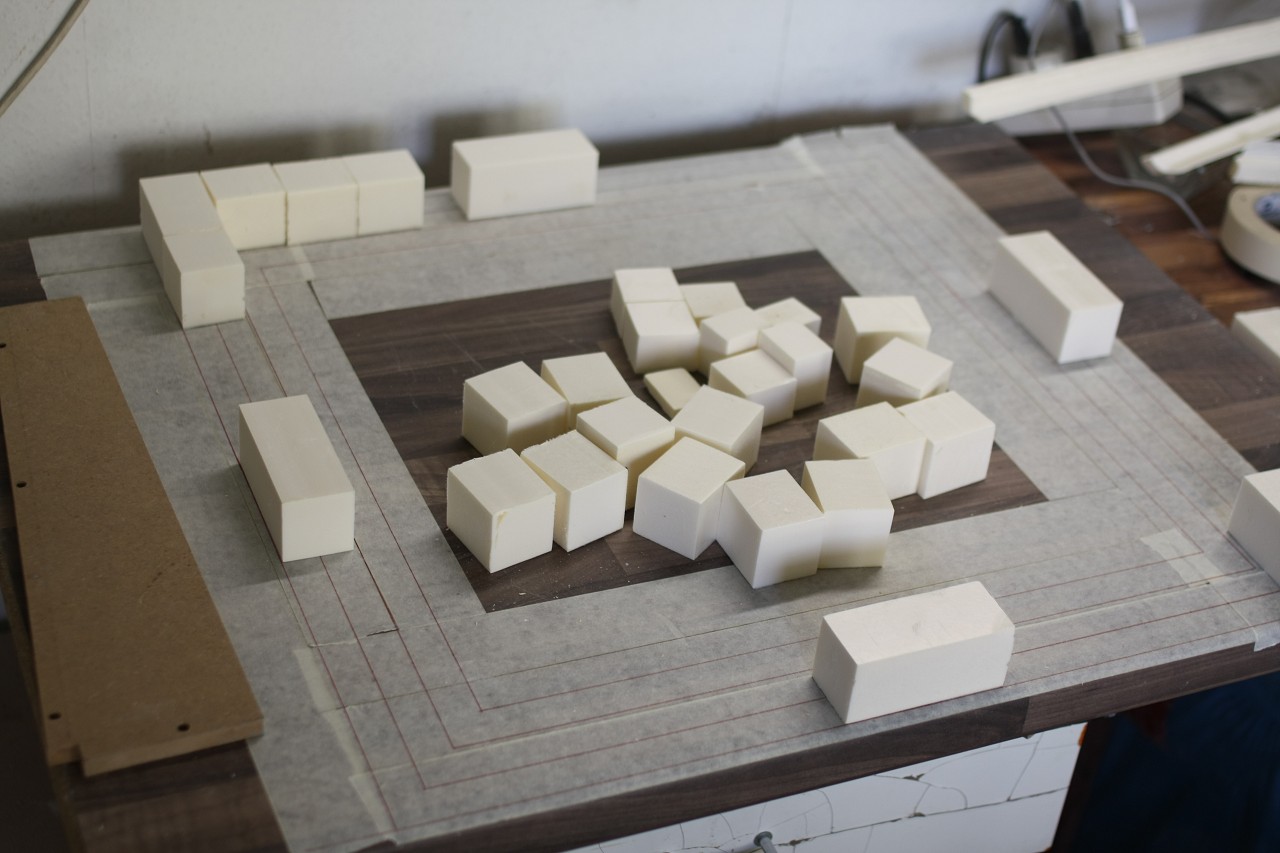 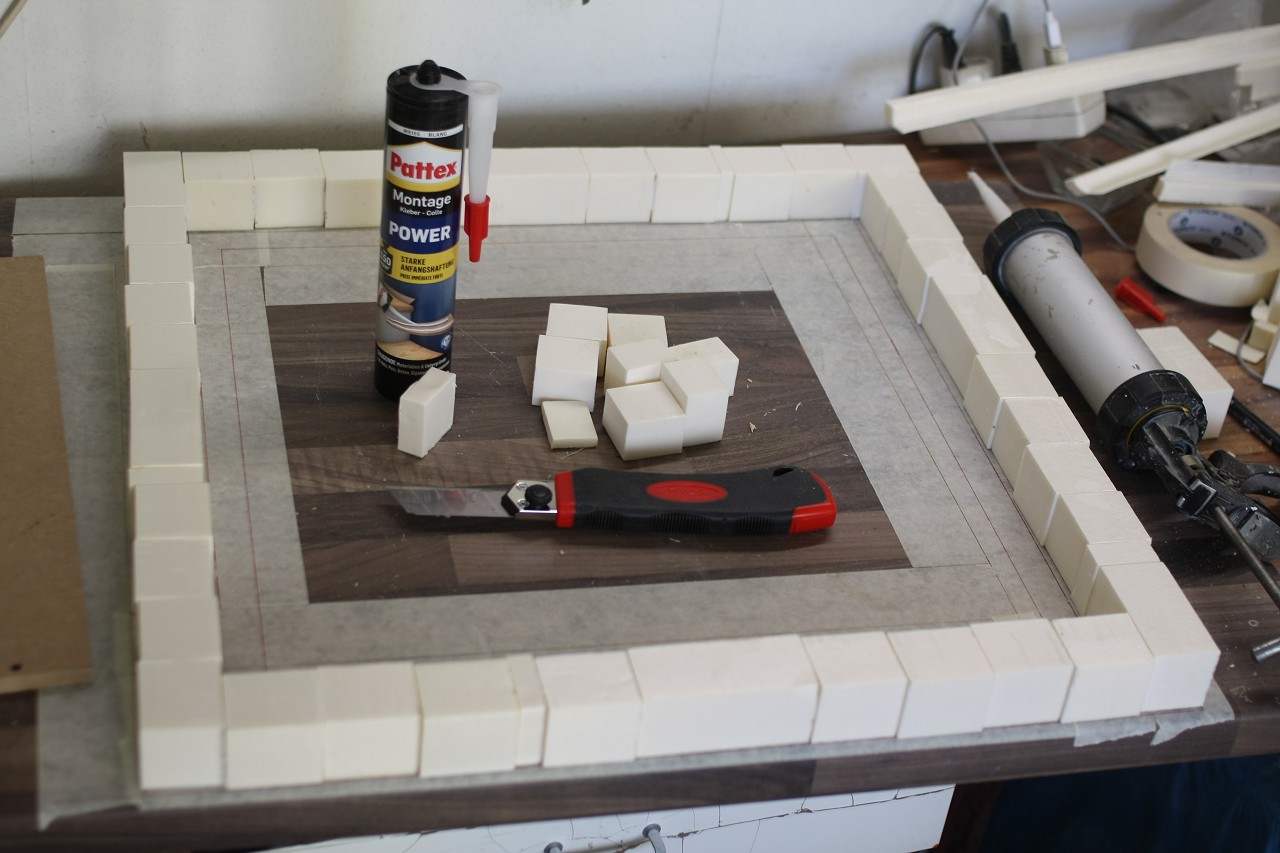 After all the floors were glued together, I started to sand down and bevel all the cubes in advance. 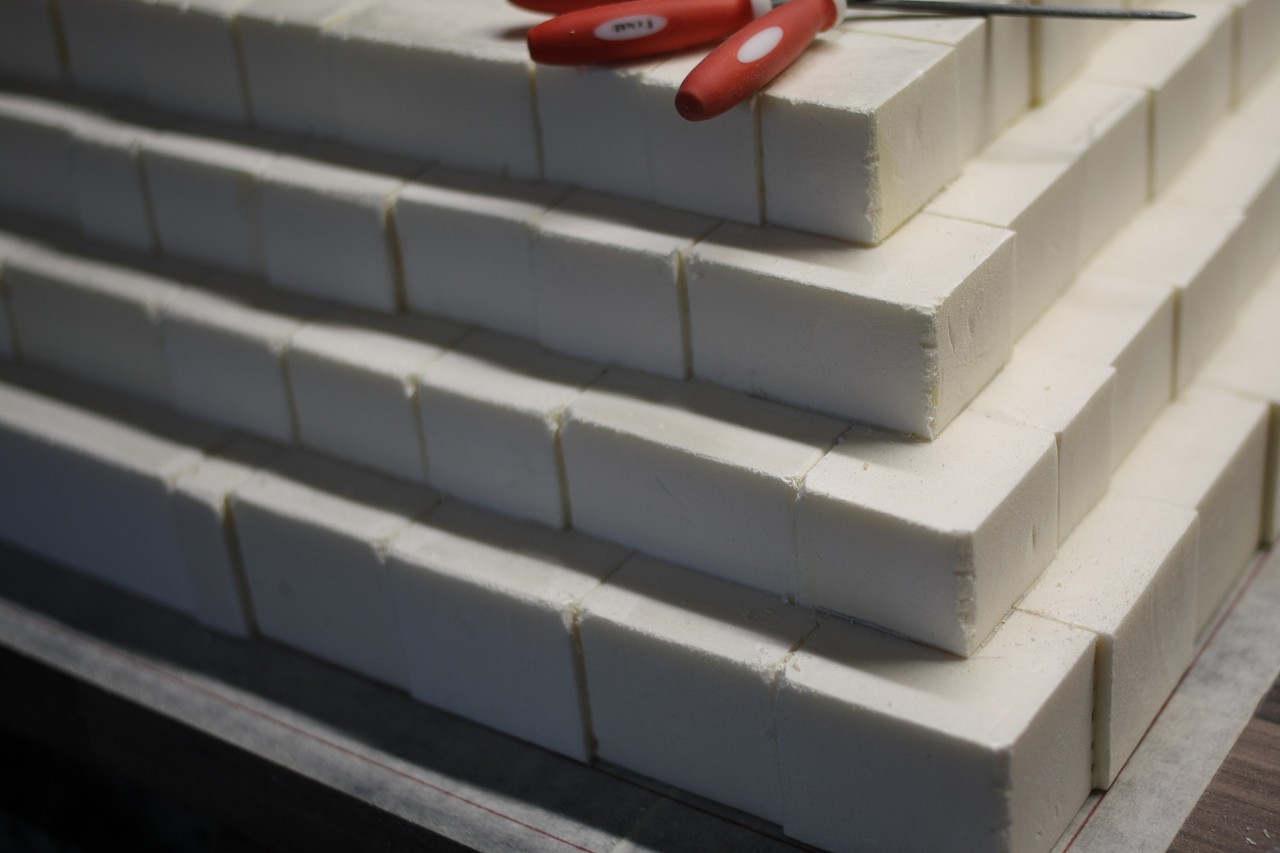 Then I painted the pyramid with quartz sand-colored paint.
The quartz sand, I actually need less effect
but if I finish the grit later, I'll get the effect I want 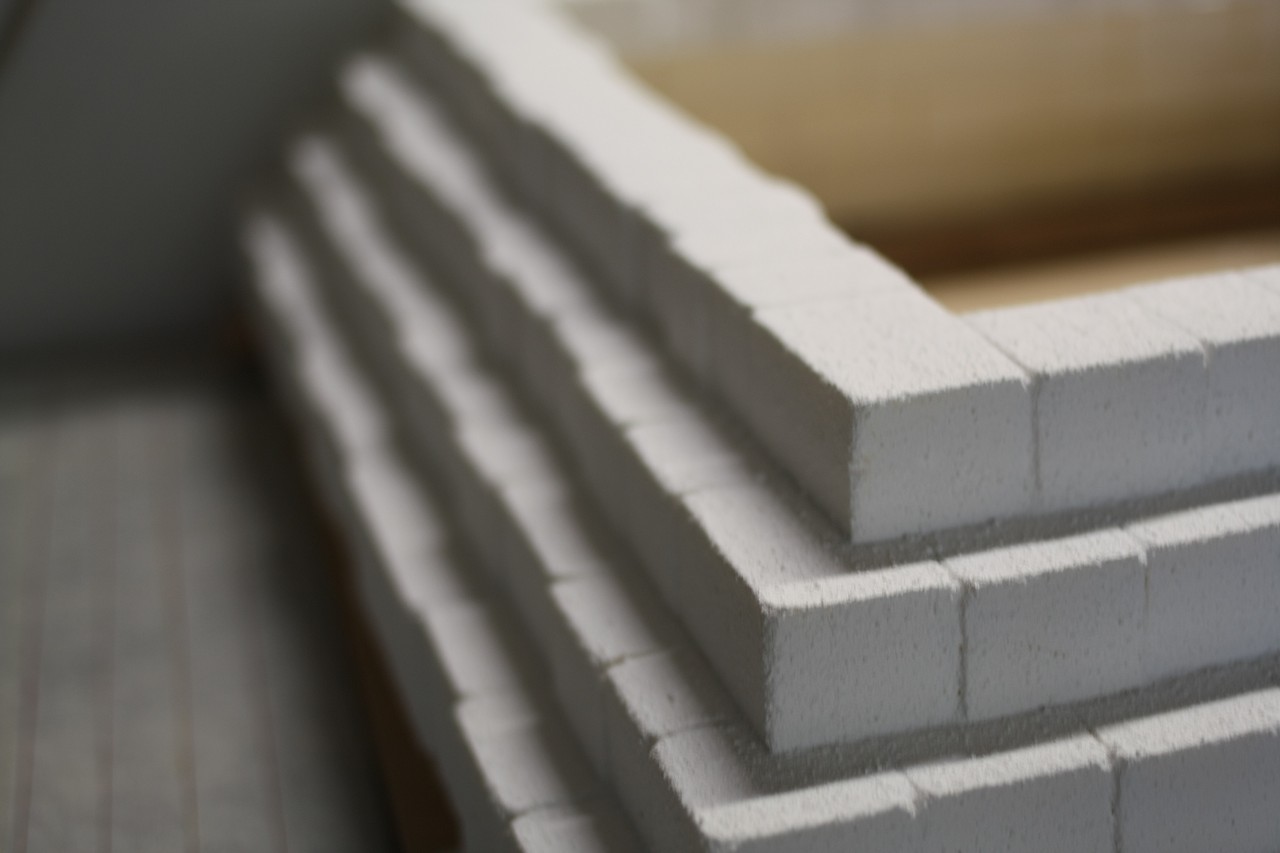 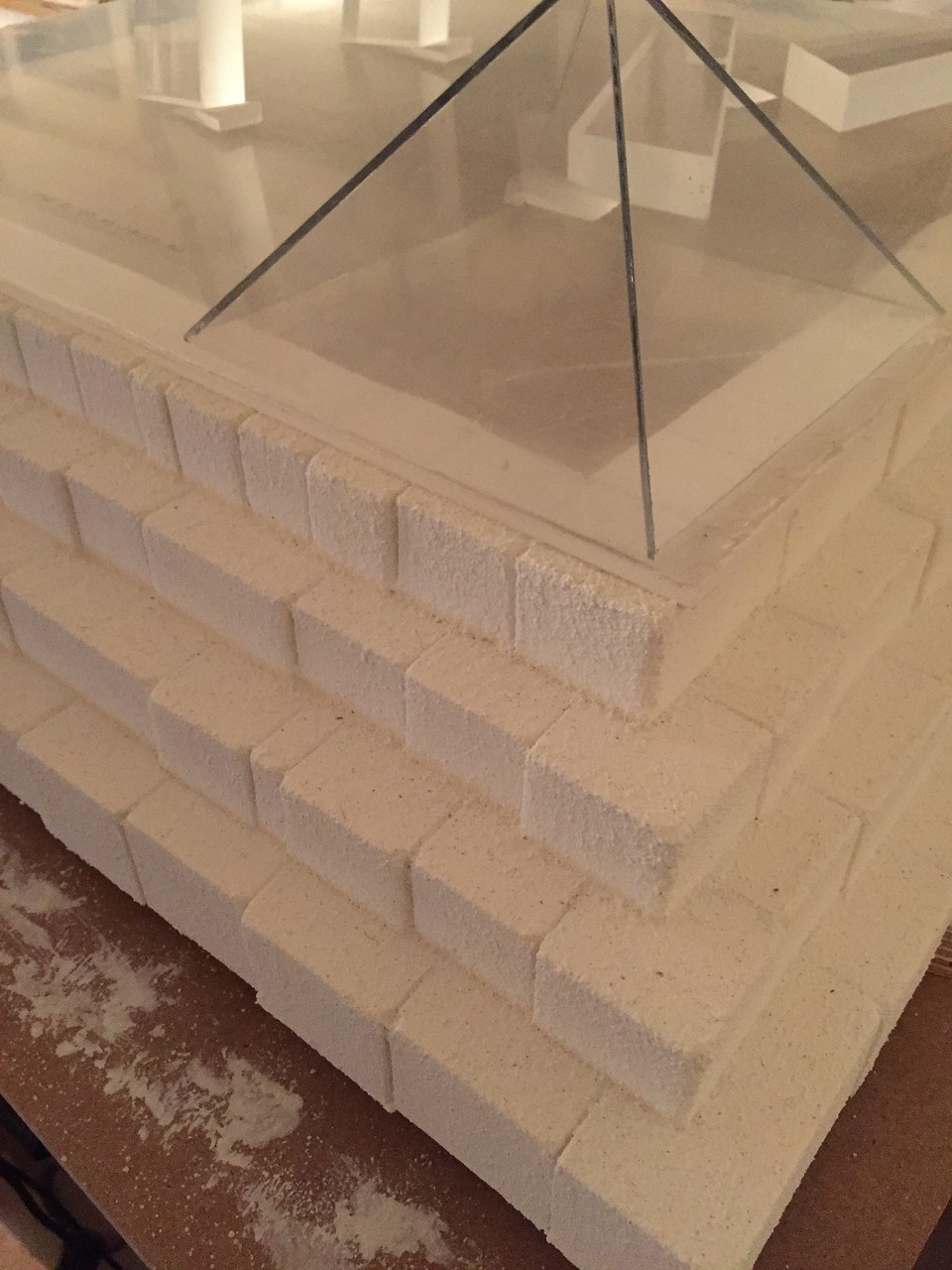 Now the next step.
Do not be surprised, I did not take the photos until winter, I built the device myself two years ago.

With my cheap table saw I could not work precisely because it was very inaccurate and the whole engine was installed wrong.
As a result, the Plexiglas was always stressed too much what caused cracking during bonding.
Unfortunately there was no adjustment screw for this.

So I built for this saw a sliding carriage which compensated for the inclination of the saw blade. 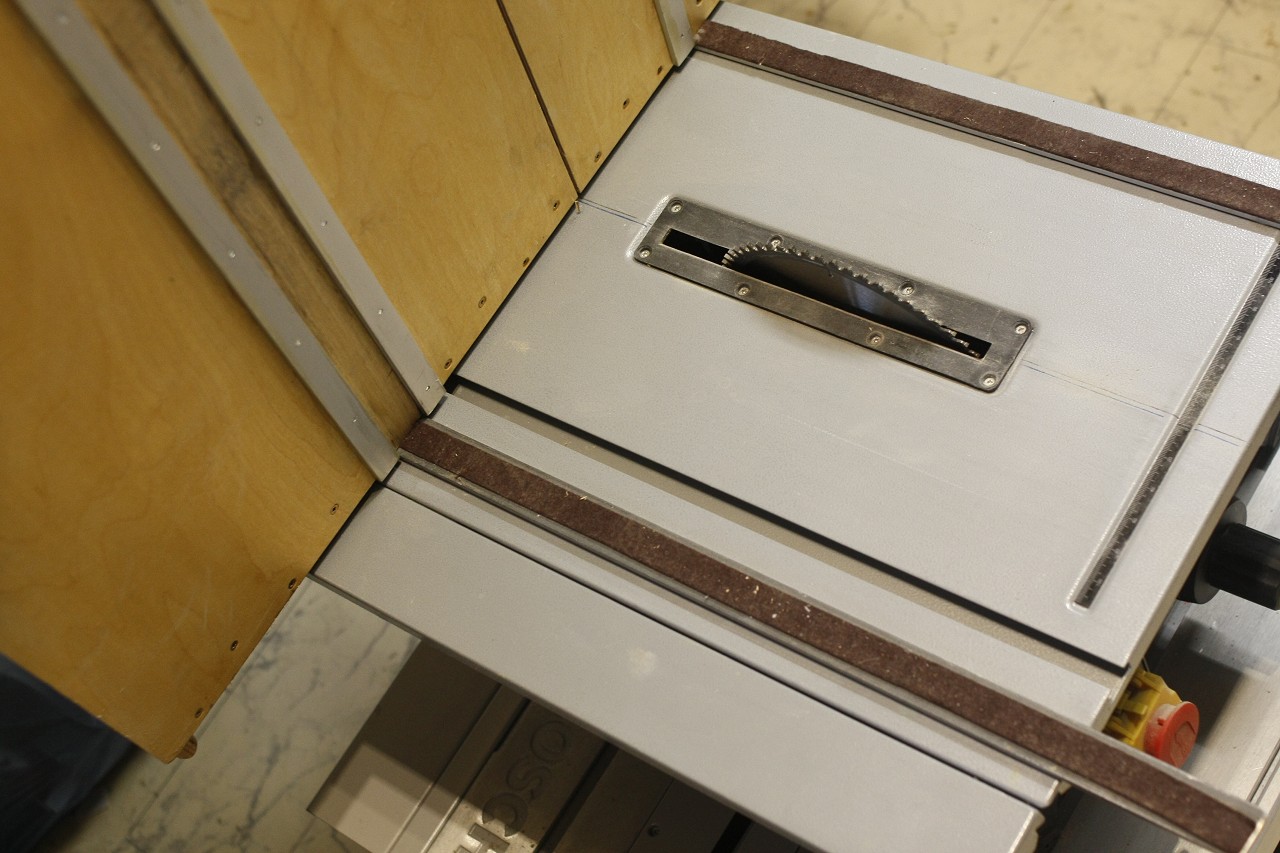 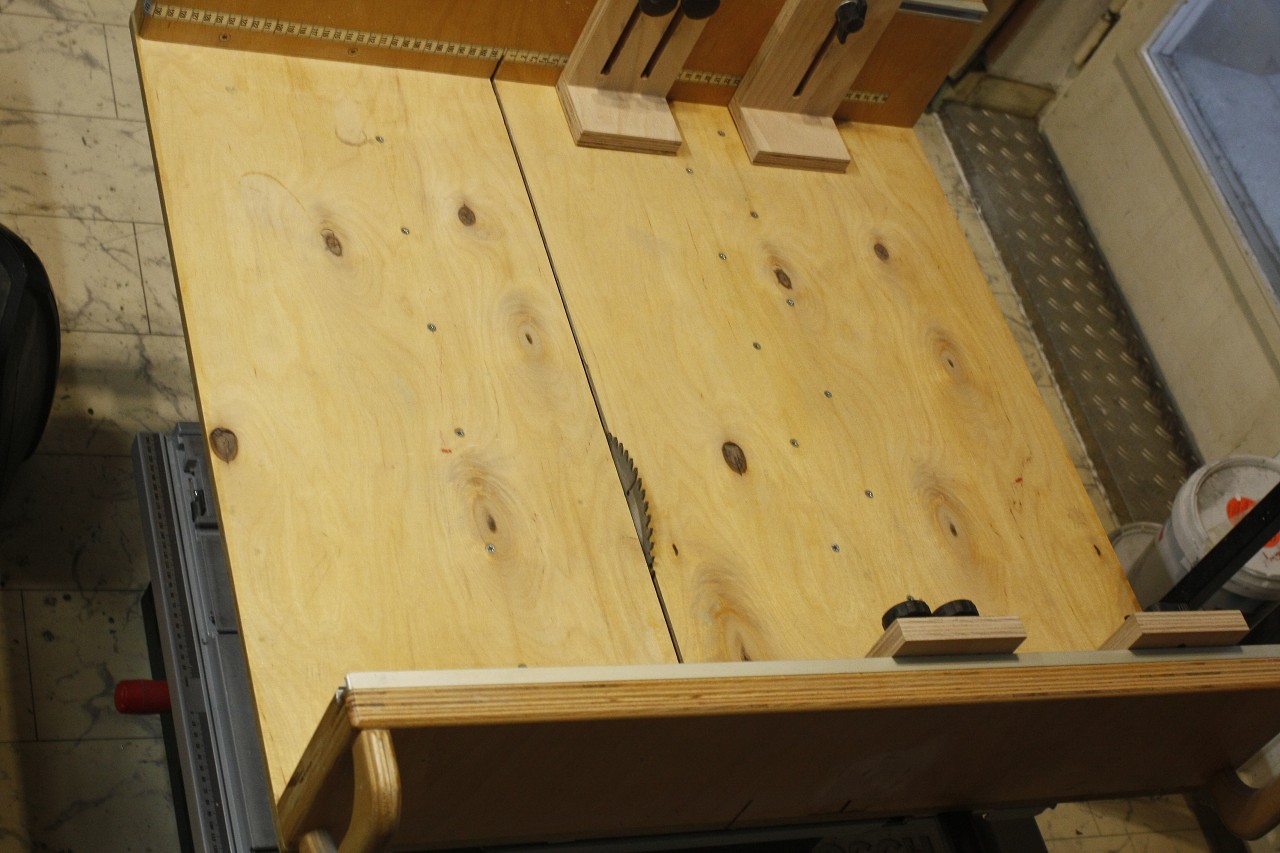 Since I could no longer use the angular adjustment of the circular saw without destroying the sliding carriage
Now I needed a support surface in the appropriate angle for the pyramid. 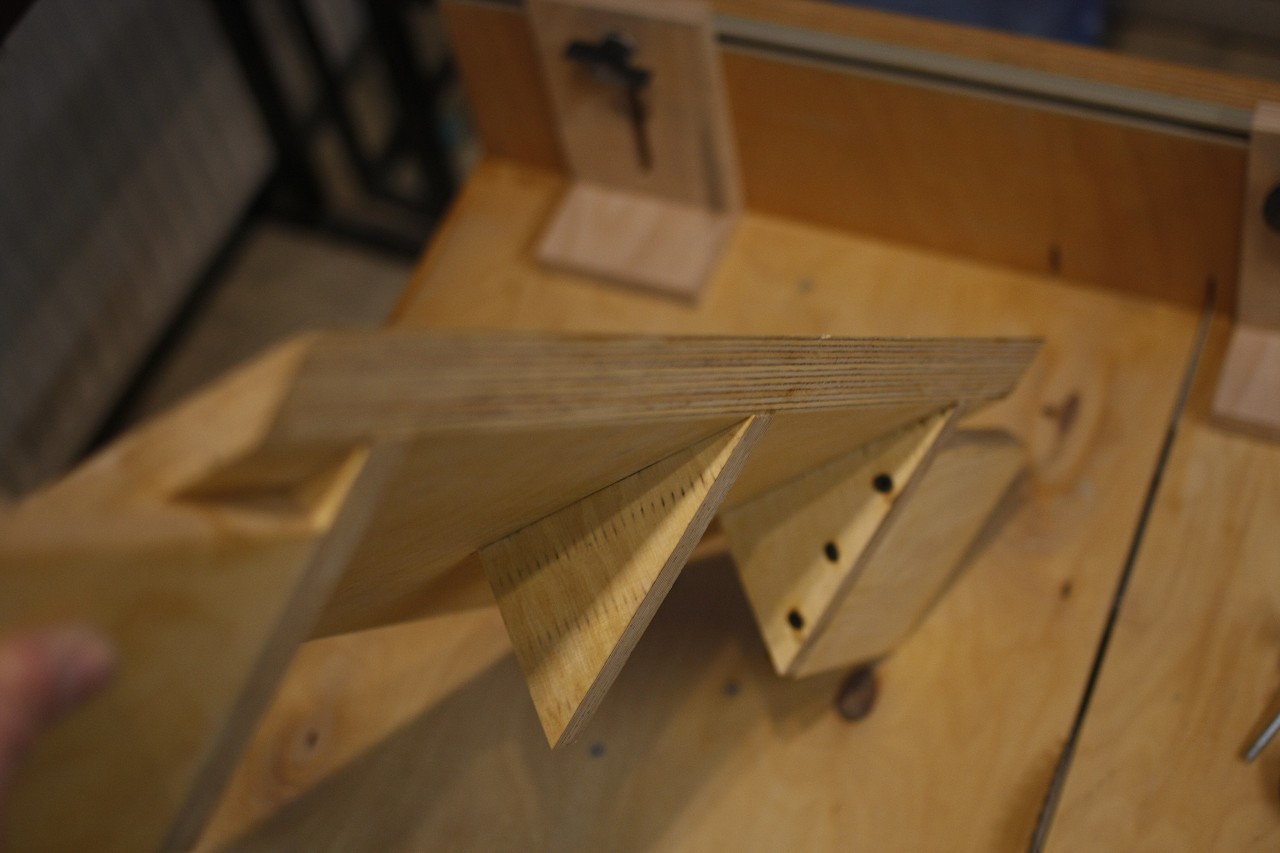 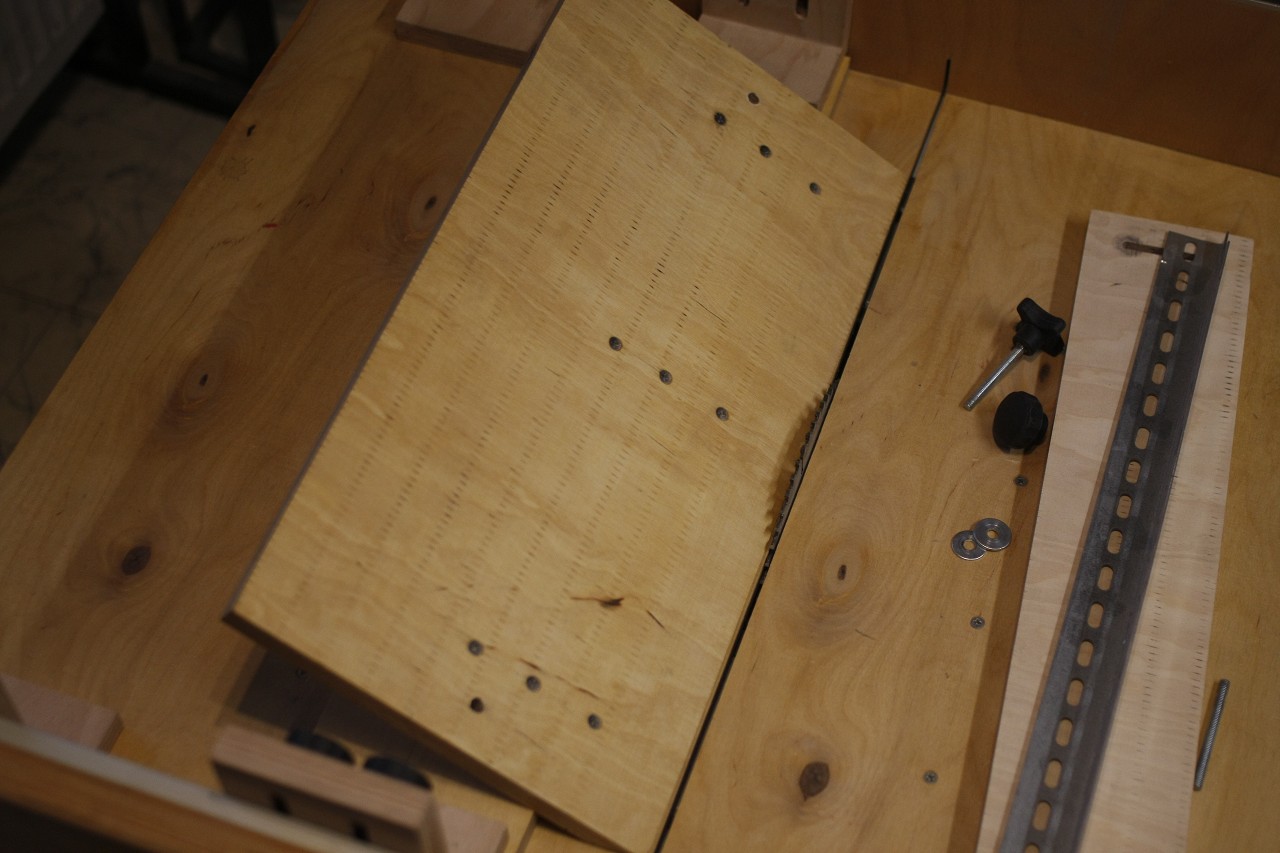 At this angle, I can now clamp the workpieces using this holder. 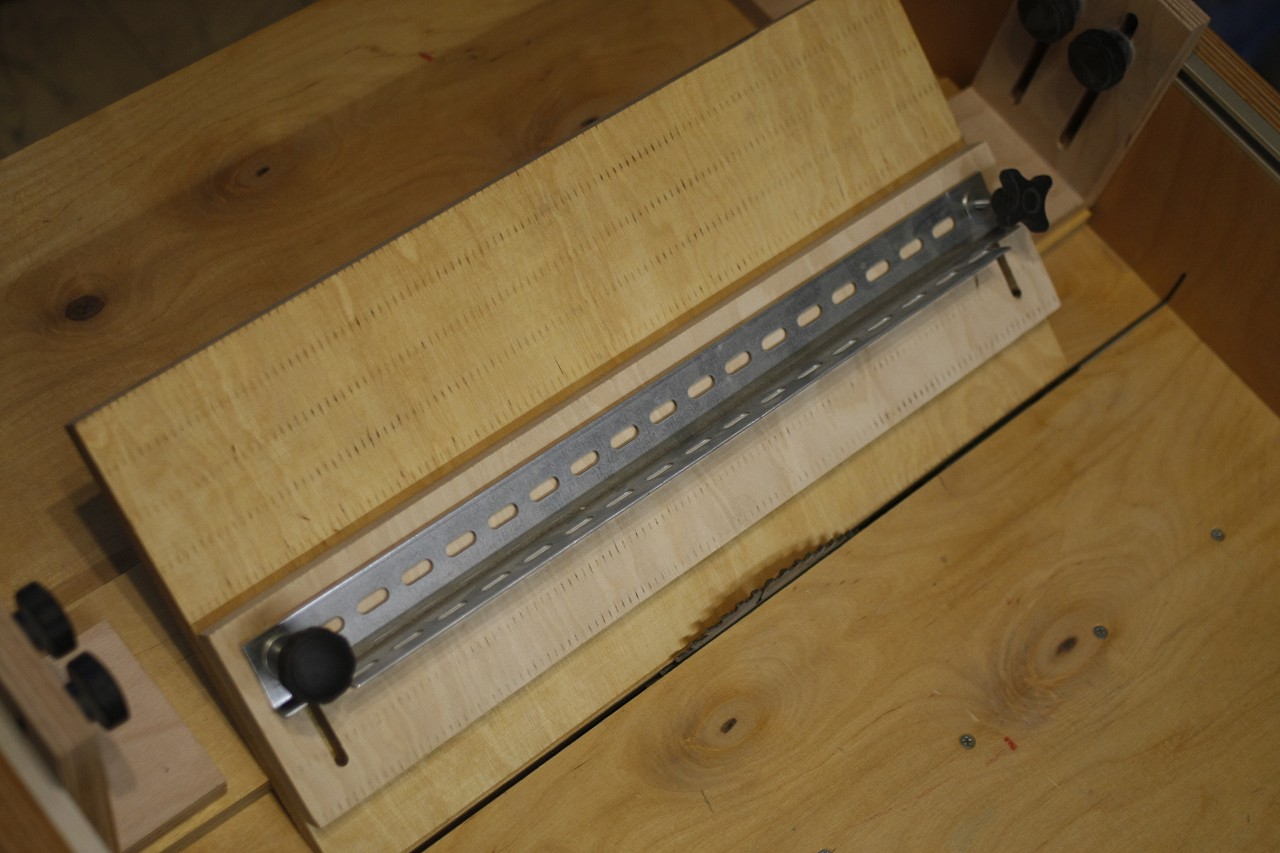 So that was it from the past, now it goes on in the now.
On my new Bosch, I now cut all parts of the glass pyramid. 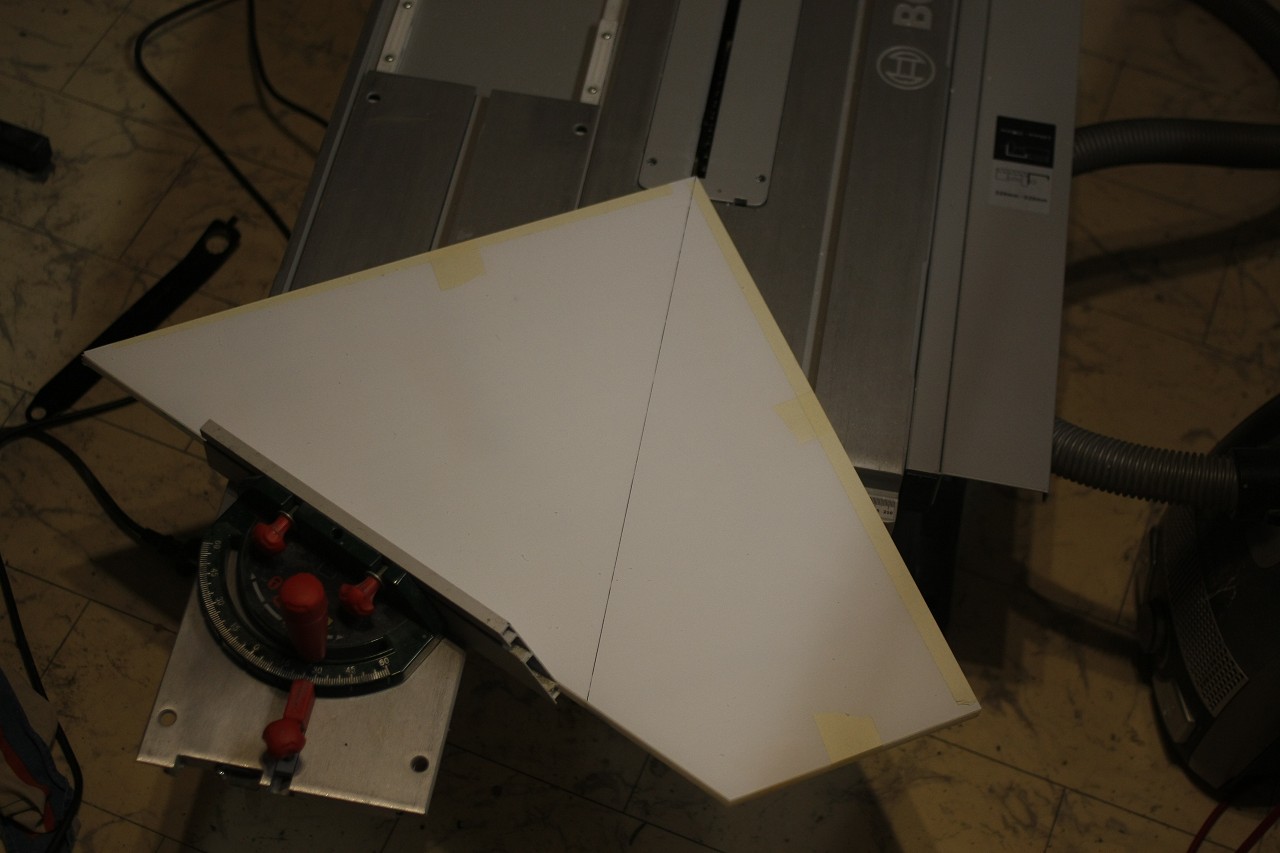 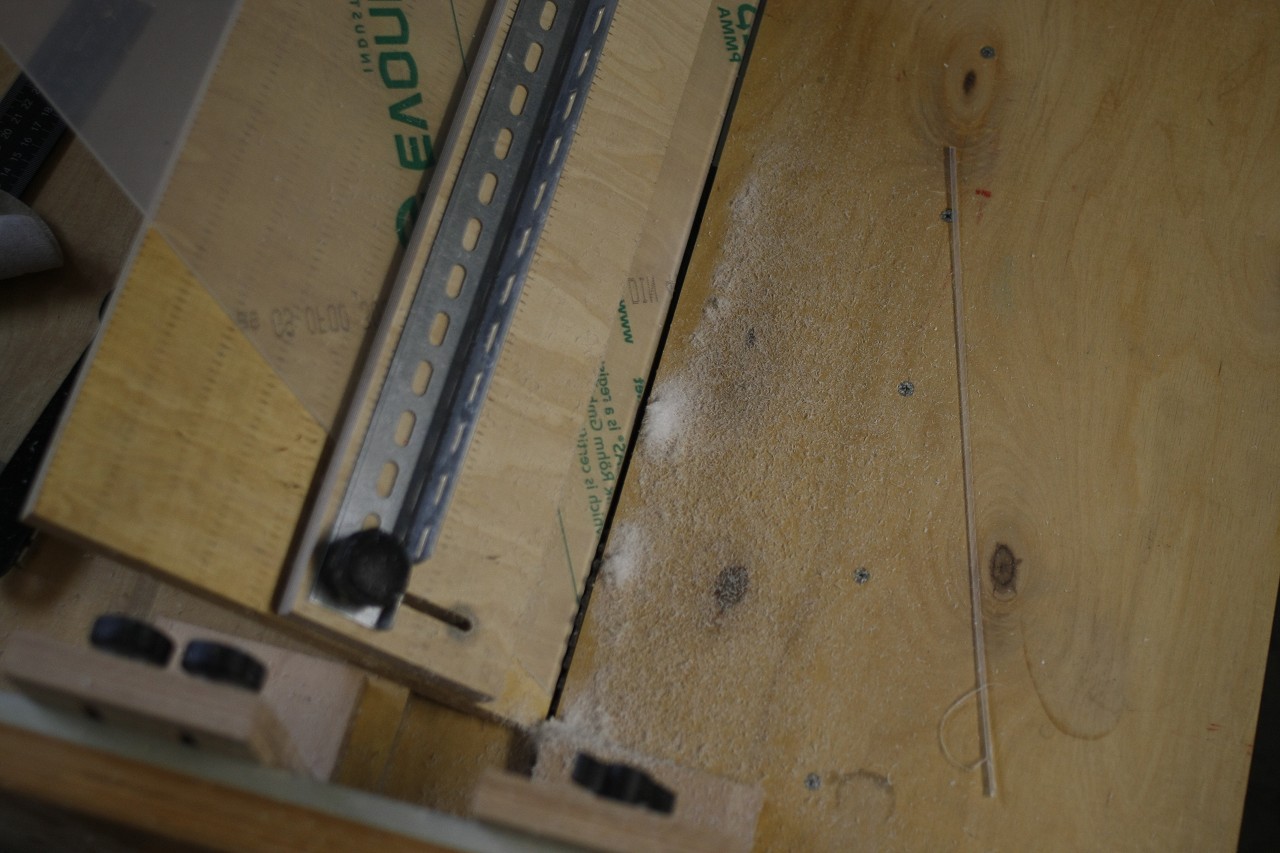 Now I cut the plates to the right height and done. 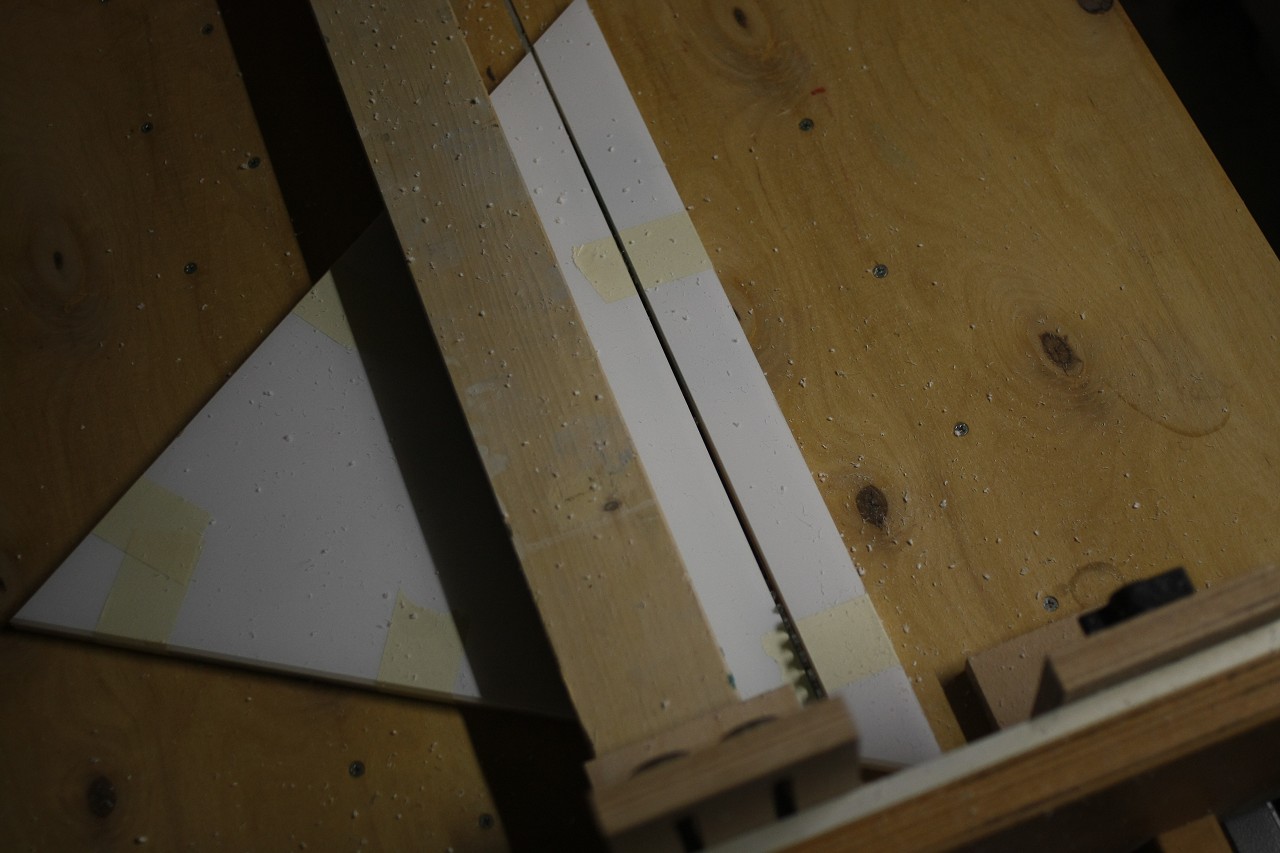 I am more than satisfied with the result, the plates themselves 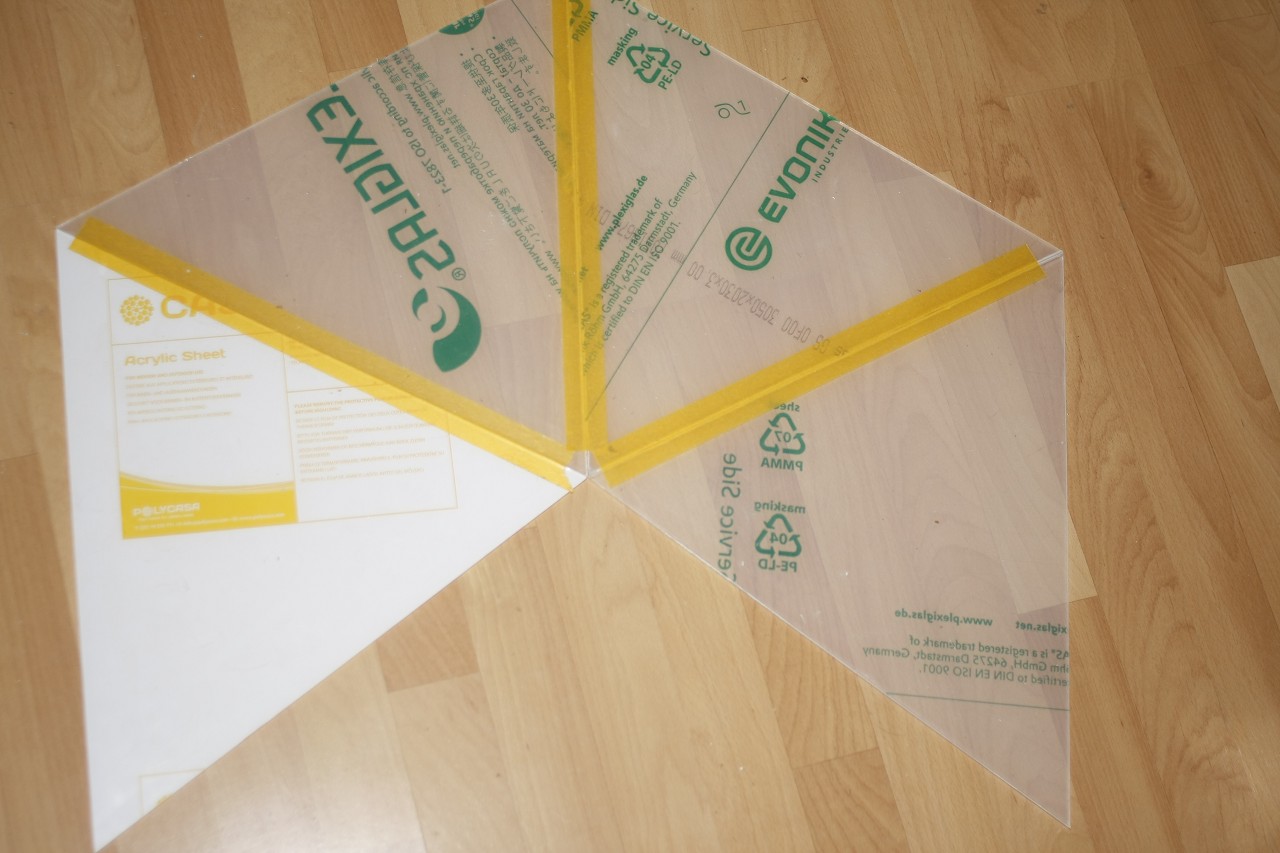 as well as the miter fit together perfectly 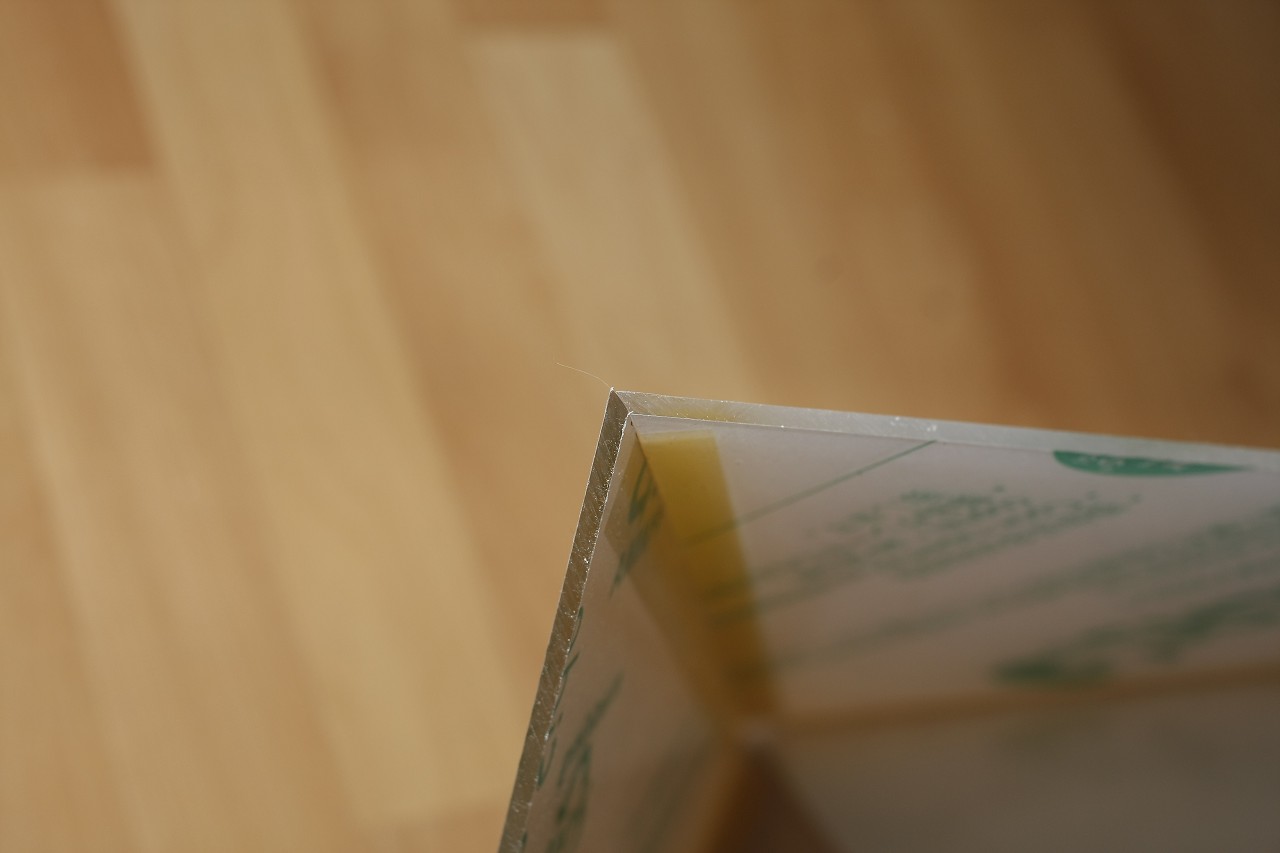 I now beveled the foundation to 45 degrees to the ground 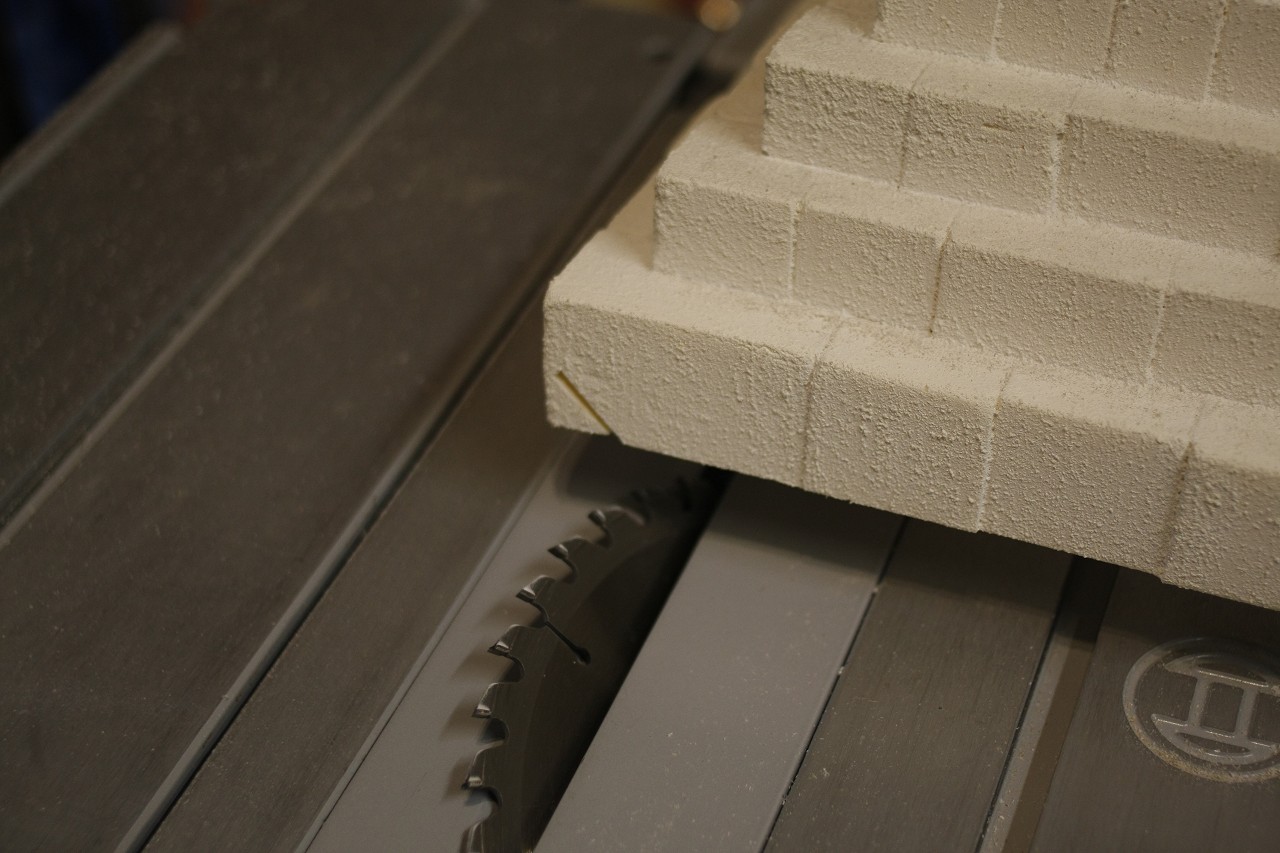 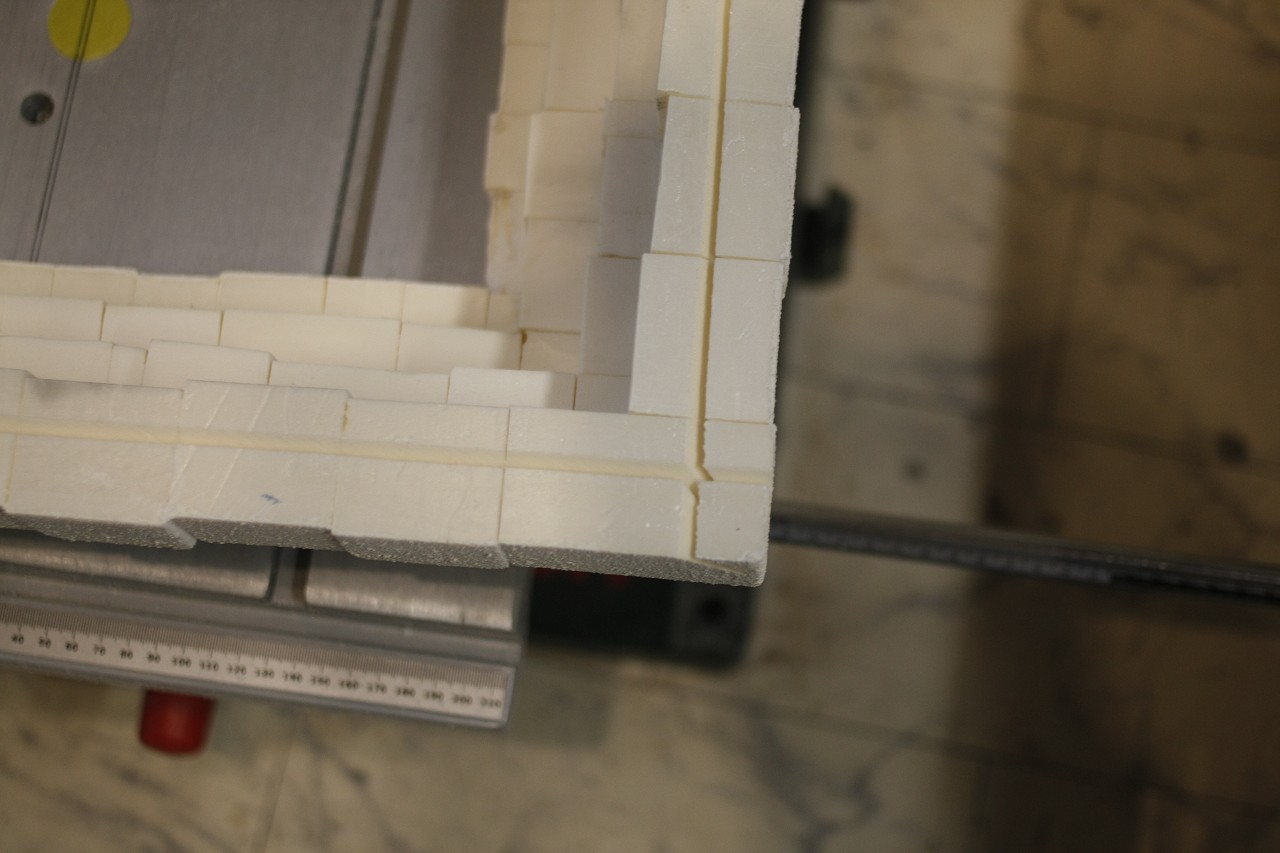 and pushed the whole thing over the milling table 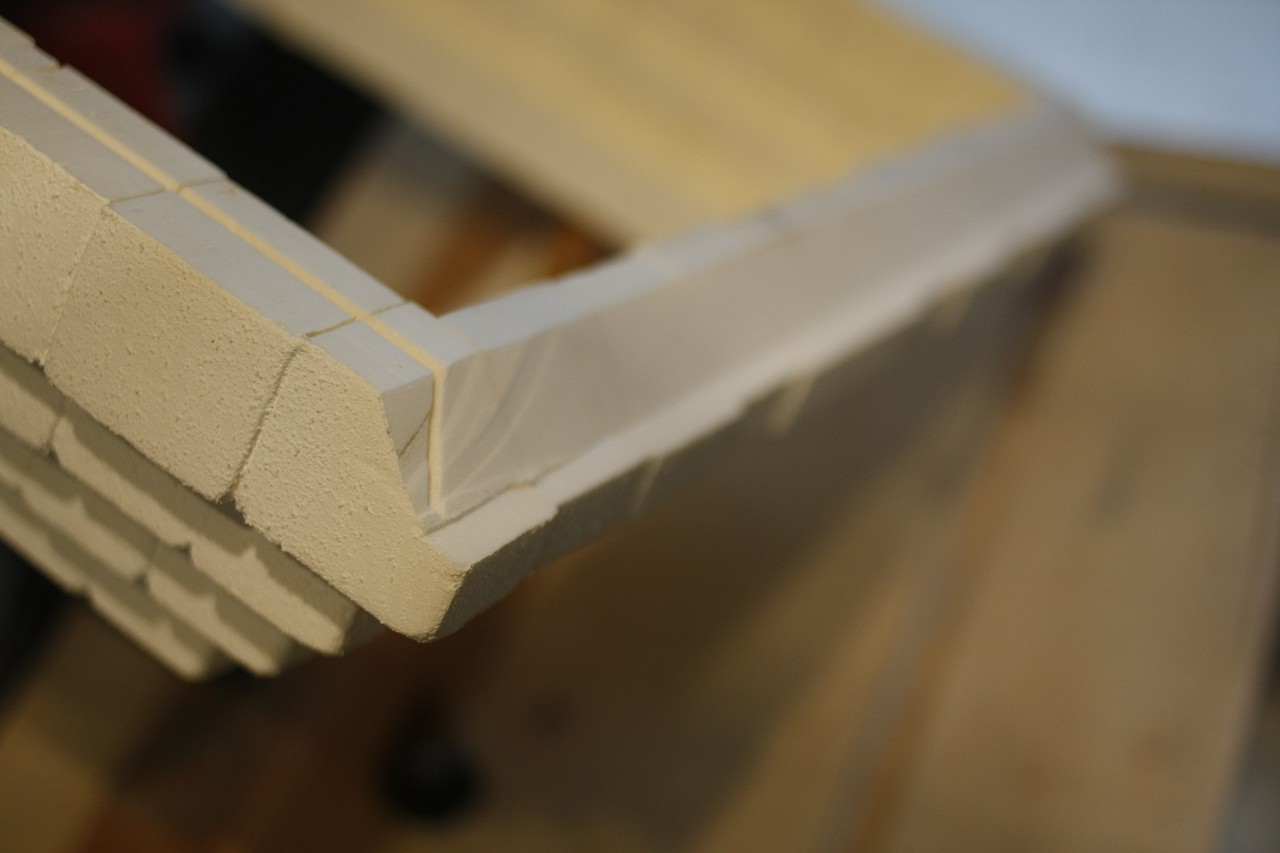 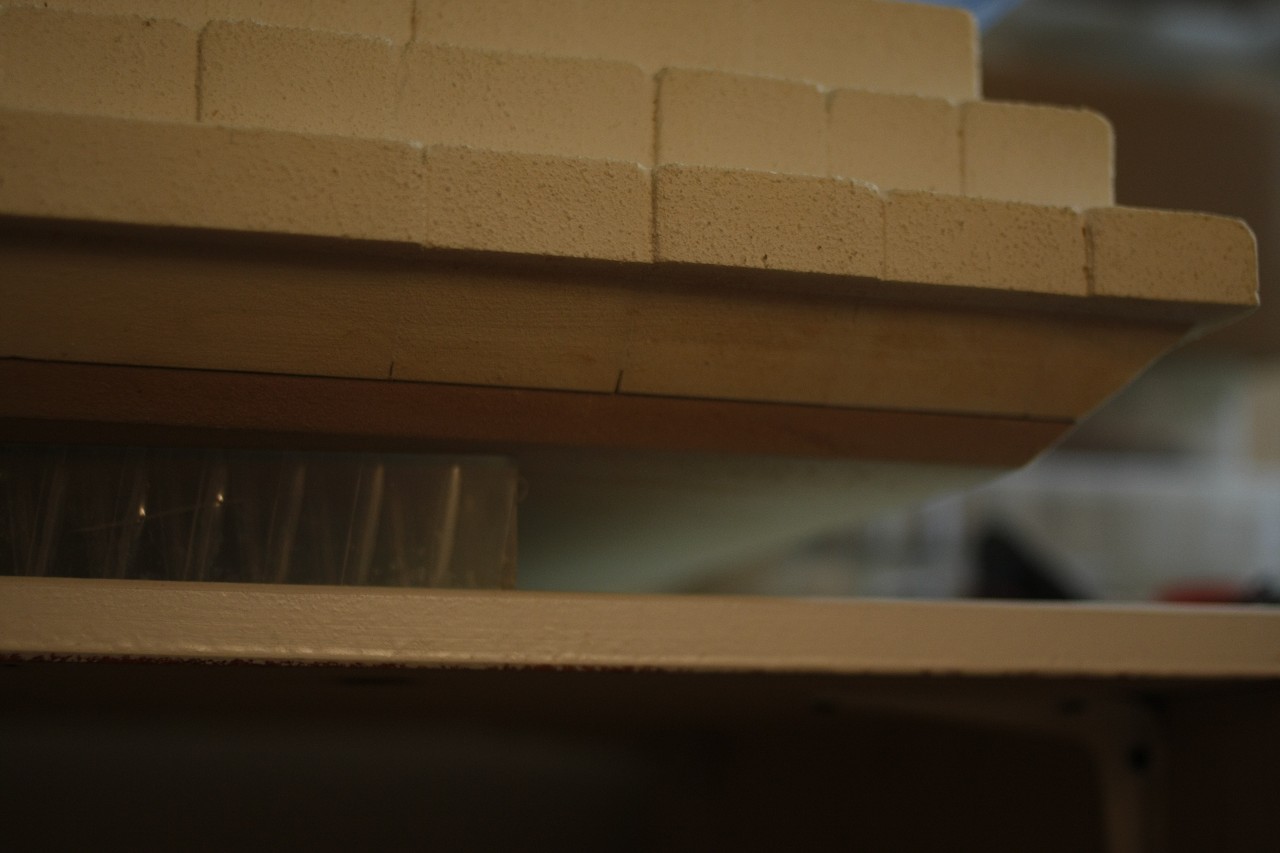 which I then edited with the router. 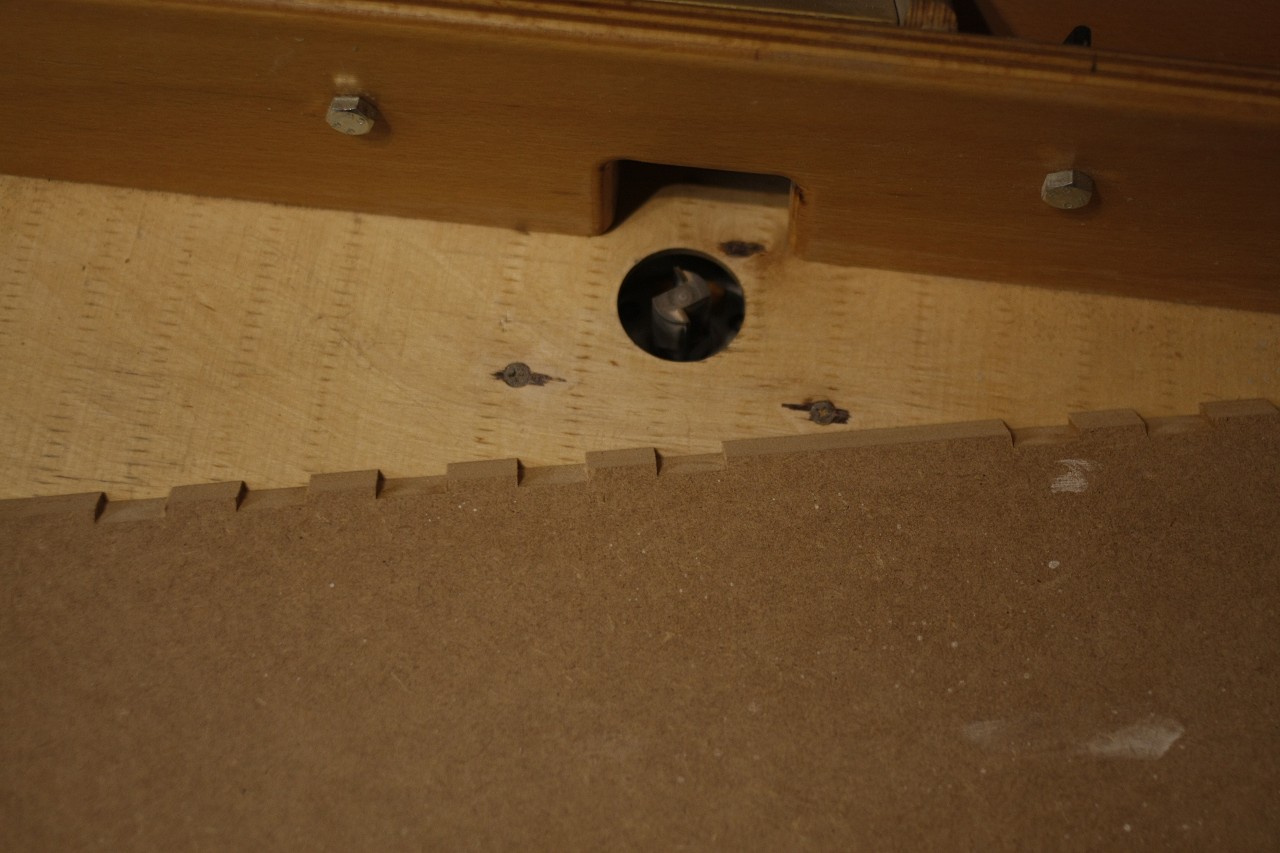 Jo, that makes a difference.
As you can see, I have worked the floors further. 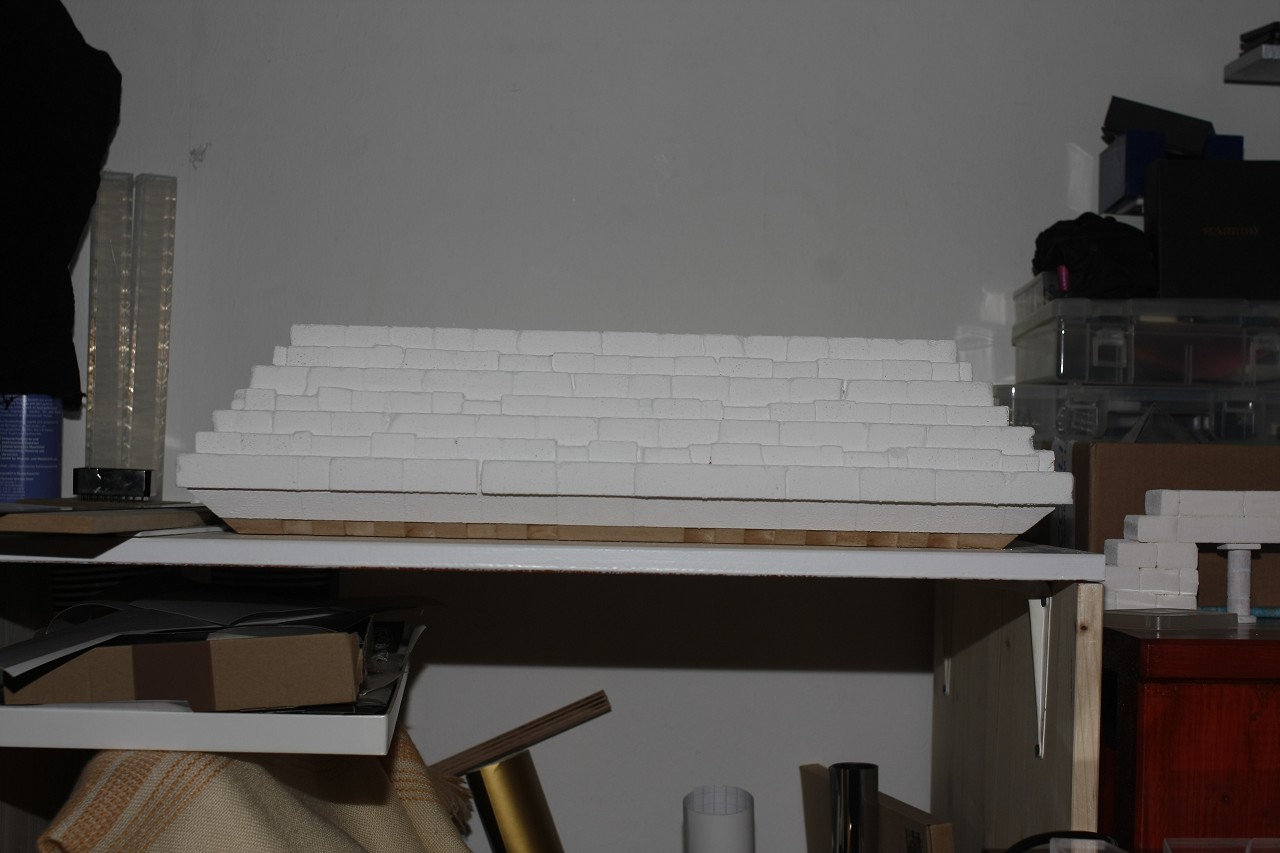 I've now cut another 10x15mm strips for that 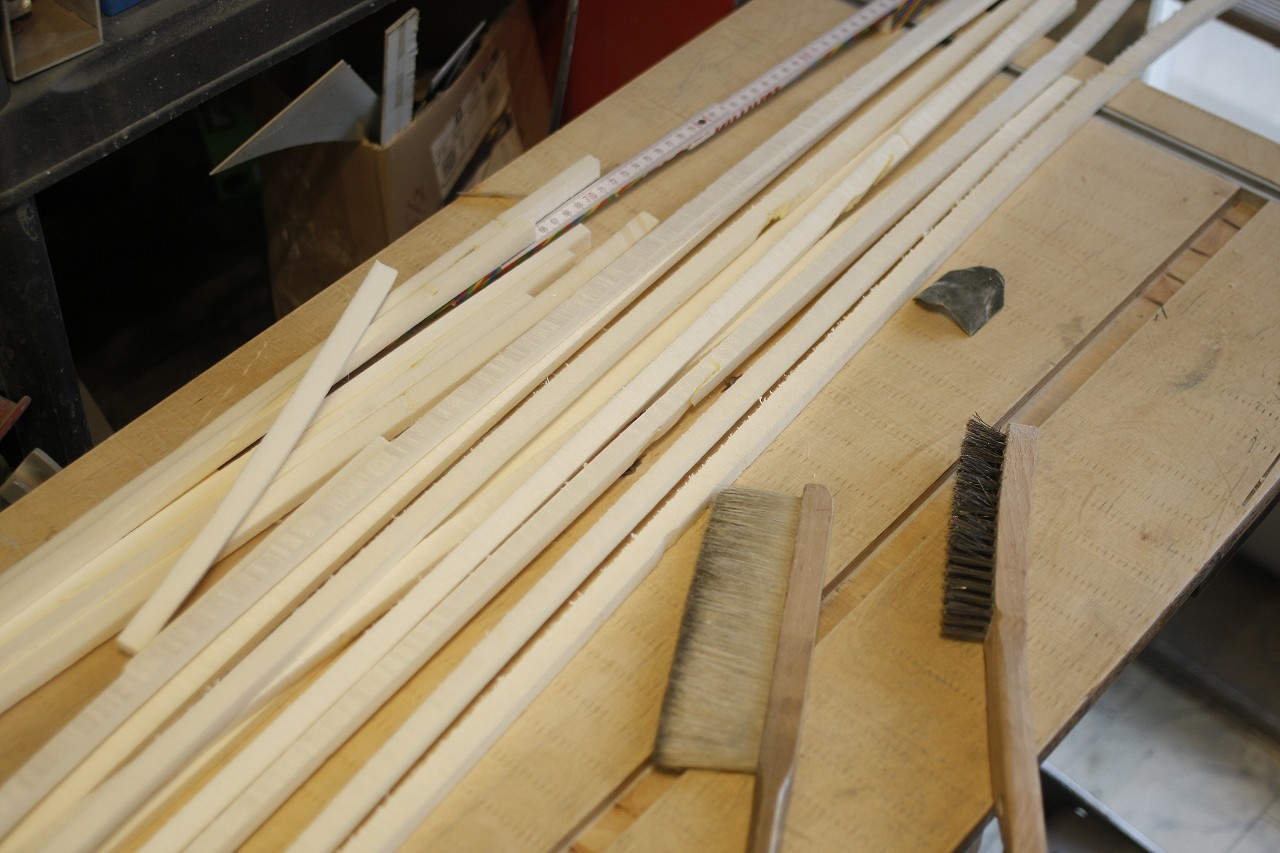 and this by means of a wire brush, a comb or just a brush, structured. 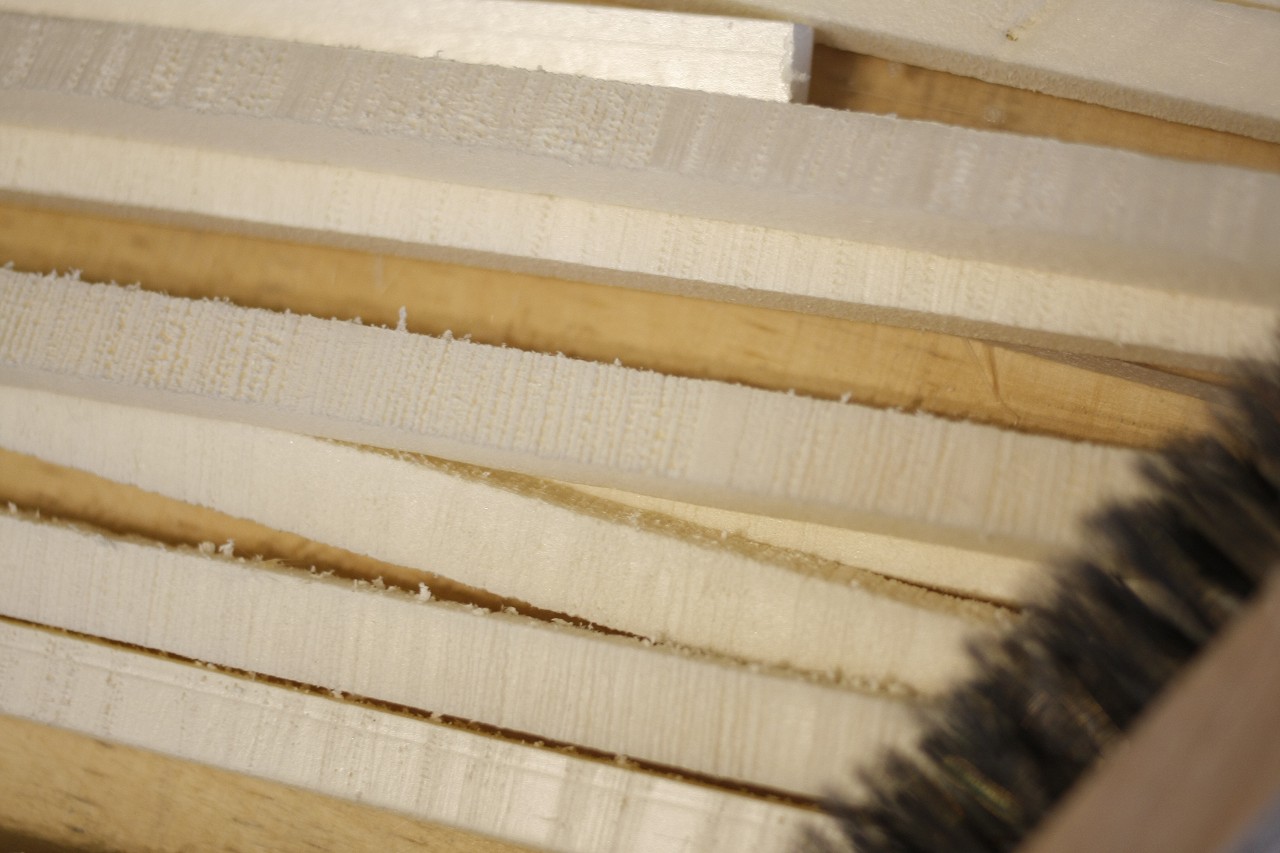 Now I have all stripes cut into cubes, rounded all the edges and beveled 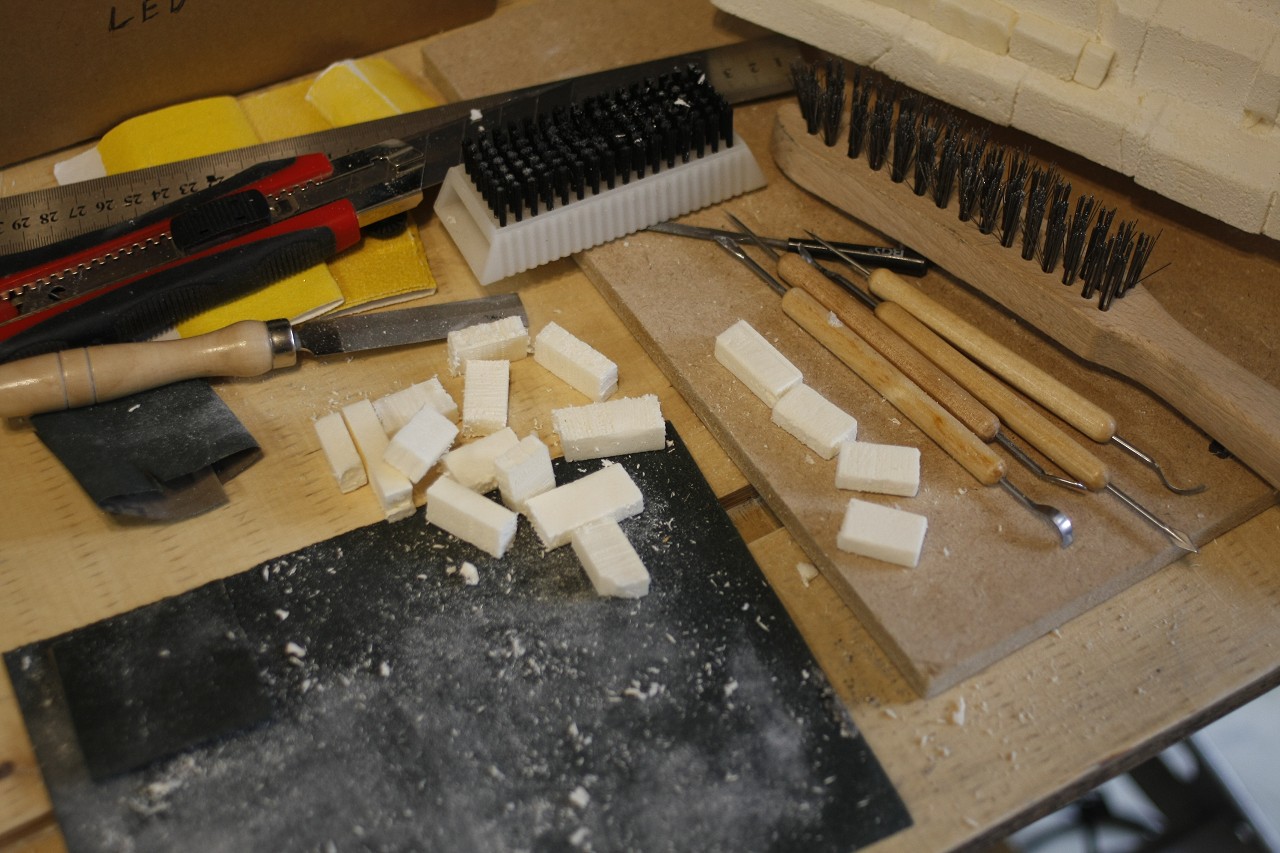 and then all these glued to the floors of the pyramid.
As you can see very well here, the structure comes out very well after sanding the grit. 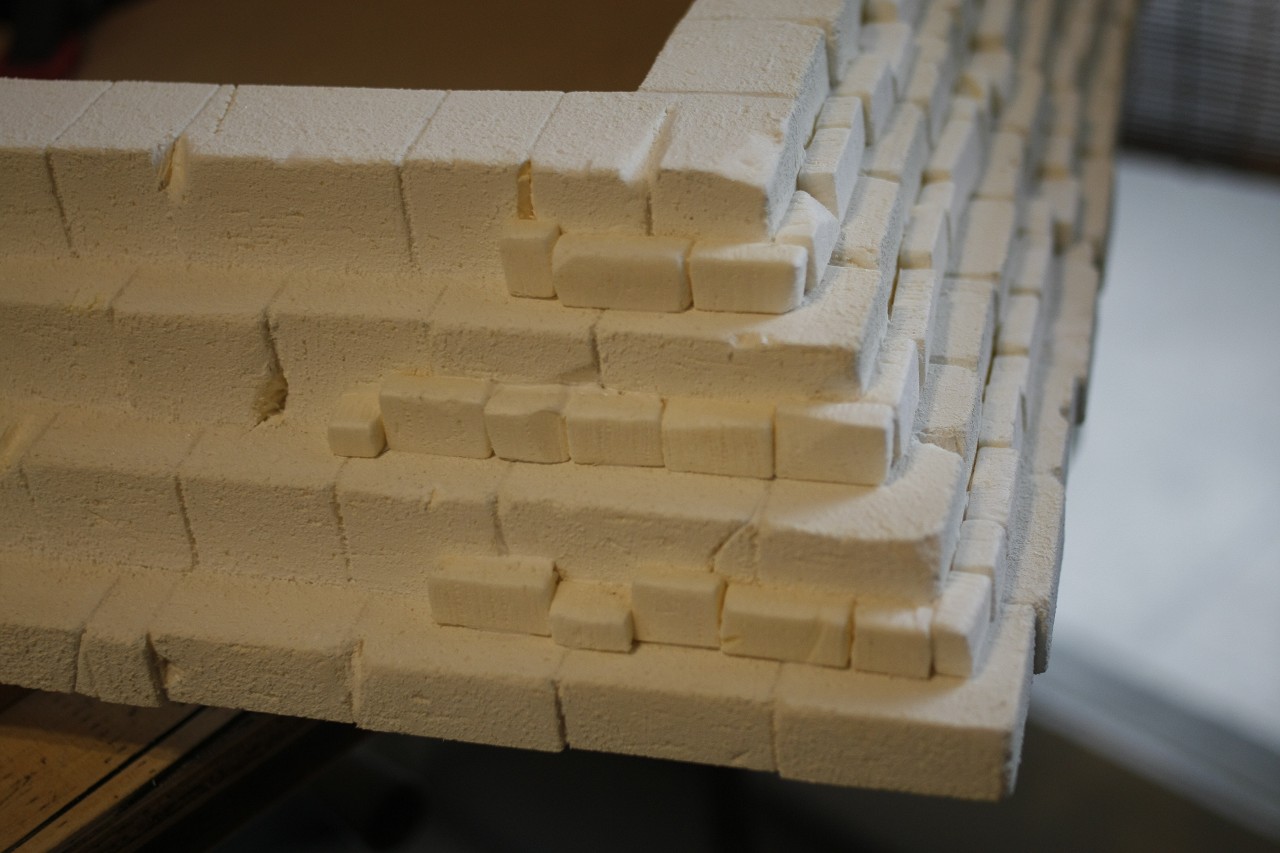 Now I've painted everything again with quartz-colored paint and structured.
Depending on how one leads the brush with the sandy color, one can achieve different effects. 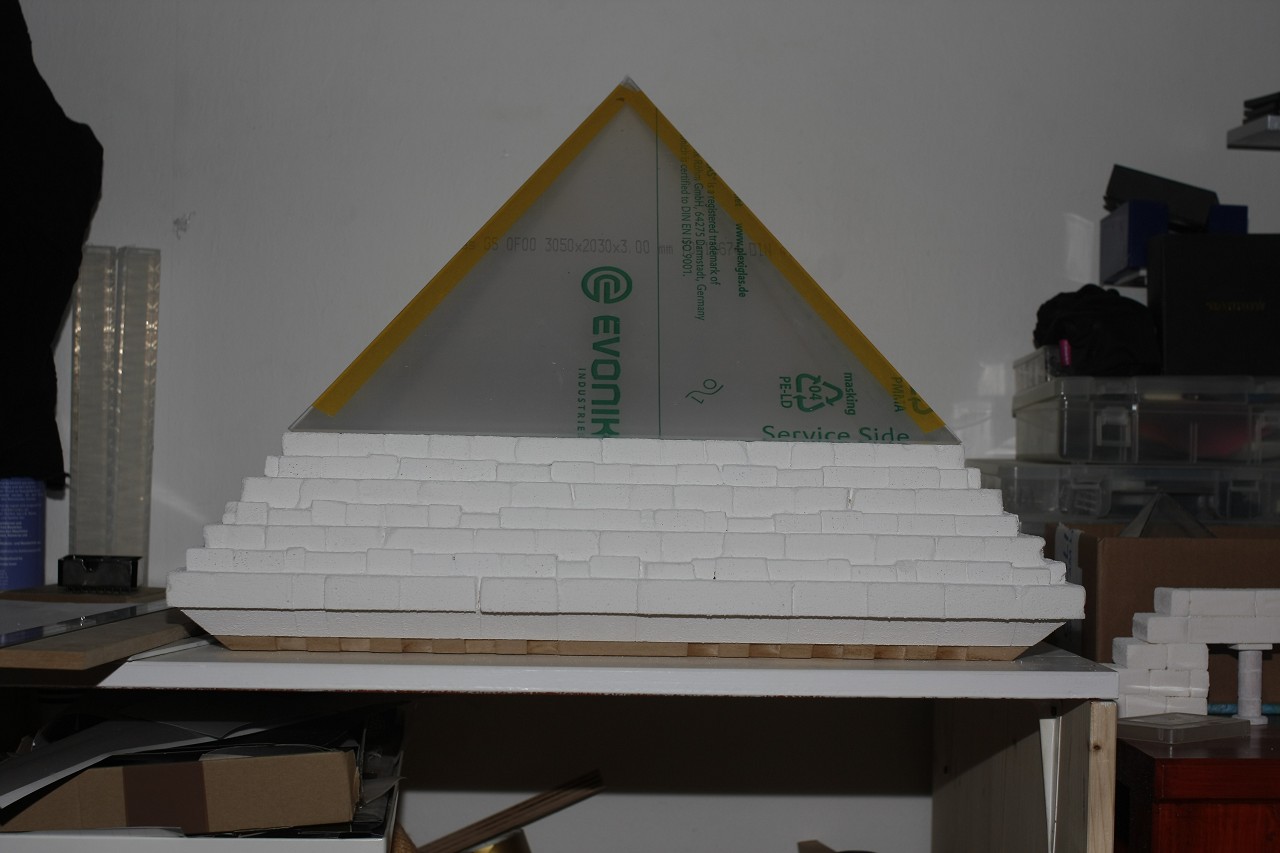 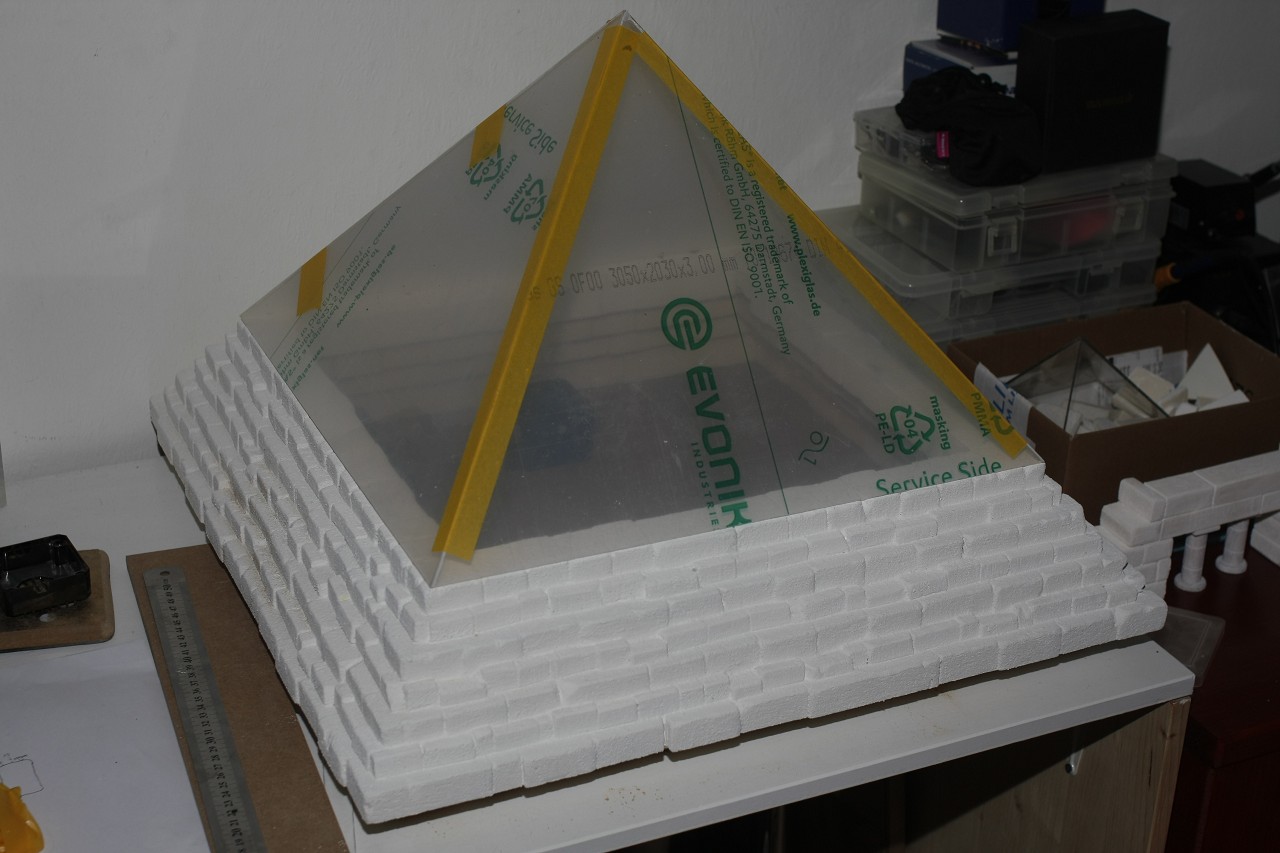 As you can already see on the last two pictures I already have some
(yes different, I can not decide: lol Temple entrances and obelisks built but then more next time.

Now you can almost imagine what I'm doing here