I have an i3-2100 that somehow (I still can't really figure out how) got two corners bent similar to this picture: 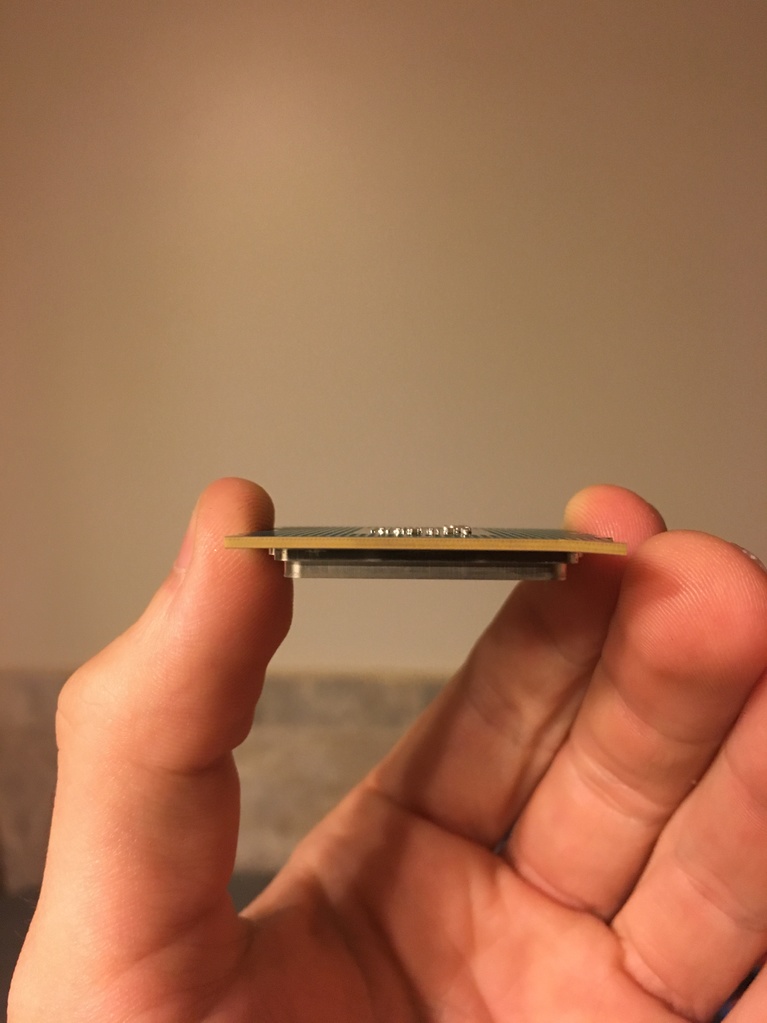 Both corners are on the same side of the chip with the notch--one of the front corners and one of the rear corners. The socket didn't seem like it had any damage or misaligned pins, and I replaced it with an i5-2500 and the i5 works perfect. The i3 doesn't stay powered on--the fans will spin for a second and then immediately power off. I'm not sure if the socket pins aren't contacting due to the bend or the chip itself has some internal lines cracked.

I'm curious if anyone has experienced this type of thing before and what could cause such a thing? The only thing I can think of is somehow the cpu wasn't perfectly seated (or maybe it was), and the heatsink wasn't made right allowed more pressure on the chip than it is designed for. But since this is just a stock Dell Inspiron 620 cooler, I find that kind of a leap. I'm very meticulous about installing cpus so I can't think I somehow made a mistake that I didn't catch.

On a related note, a recent i5-680 I purchased looked similar with similar bends in two corners but not as bad, and it powered up perfectly and I'm actually using it to post this.

Really curious about this and want to hear thoughts. Just want to make sure I know what could have caused it to watch for in the future. Thank you in advance.

you can see a crack in the foreground where your index finger is.

you can see a crack in the foreground where your index finger is.
Click to expand...

That’s not a picture of his CPU

Ocellaris said:
That’s not a picture of his CPU
Click to expand...

see that's what happens when there are words before the pictures.

This has become more common with Intel processors as they shrank the substrate and didn't warn people that it couldn't take the same mount pressure as previous processors. https://www.pcgamer.com/intel-skylake-cpus-are-bending-under-the-pressure-of-some-coolers/

Forgive me for the ignorance, but what is the 'lga side'?

Ocellaris said:
That’s not a picture of his CPU
Click to expand...

This is correct. My cpu doesn't appear to have any cracks even under close examination.

Master_shake_ said:
see that's what happens when there are words before the pictures.

LOL! I'm going to have to keep this in mind. Probably helps FS threads though!

Vader1975 said:
This has become more common with Intel processors as they shrank the substrate and didn't warn people that it couldn't take the same mount pressure as previous processors. https://www.pcgamer.com/intel-skylake-cpus-are-bending-under-the-pressure-of-some-coolers/

I've read about this too, but this is an older lga1155 processor with the older and thicker substrate.

i've got an e3 1220 and an i3 2120 sitting here right now that spent most of their lives under a socket retention plate and a 1u super micro heat sink and none of them look warped.
S

KazeoHin said:
This is definitely the case. I've seen it with TONS of Post-skylake CPUs, but never a sandy..

The CPUs usually still work regardless, but because of how Thick Sandys usually are, I don't know...
Click to expand...

Interesting, so you think the cpu will still work? I do have another 620 which I took the i5-2500 from (upgraded it to a i7-2600k) that I could test the i3 on. In fact, now that I think about it, I think I did test it and it wouldn't power up just like in the other system.

I have bent the hell out of those and never had one break yet.

SamirD said:
So do you think my i3 is still good? How would you suggest I test it aside from the test I've already tried?
Click to expand...

Bend it back flat and put it back in and see if it works. That is what I have done in the past. I have not had one that would not work due to being bent though. We beat the hell out of those CPUs by using clamping force on the sockets that is much higher than specification in order to get excellent TIM mates all the time.
You must log in or register to reply here.
Share:
Reddit Pinterest Tumblr WhatsApp Email Share Link
Top