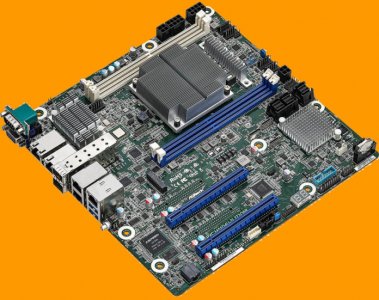 ASRock Rack EPYC3451D4U 2L2T2O8R Three Quarter
Perhaps one of the coolest motherboards we have seen launched recently also has an enormously long model number. The ASRock Rack EPYC3451D4U-2L2T2O8R may have the longest model name we are going to see on a motherboard this year. It also has some of the most functionality we will see on an embedded motherboard. ASRock Rack is going all-in on the platform offering just about everything one could want from a platform.

The EPYC3451D4U-2L2T2O8R is a mATX motherboard so it is certainly larger than some other mITX motherboards we have reviewed. The reason for that becomes quickly obvious: it needs the extra size. Onboard we have a 16-core AMD EPYC 3451 CPU. You can read the AMD EPYC 3451 Benchmarks and Review to see just how much performance that solution provides. Here we get a 1 DPC configuration which means we get quad-channel memory and up to 512GB of RAM (4x 128GB.) 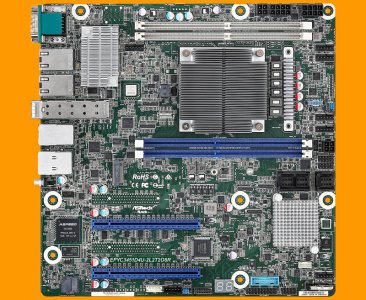 ASRock Rack EPYC3451D4U 2L2T2O8R Top View
Onboard we get a PCIe Gen3 x8 slot and a x16 slot. That x16 slot’s lanes are shared with the MiniSAS HD and one of the Oculink connectors. There are four PCIe Oculink connectors for U.2 NVMe and one for 4x SATA devices (the SATA one is shared with the x16 slot.) Using a M.2 SSD is possible but one can also break that out to 4x SATA ports. That means one can get a total of 4x U.2 NVMe SSD ports a PCIe Gen3 x8 slot, and 12x onboard SAS ports albeit using a plethora of cabling options to get the SATA lanes out.

Storage does not stop with the SATA and PCIe lanes though. There is also an embedded Broadcom / LSI SAS3008 controller onboard which means we get 8x SAS3/ SATA III ports as well.

ASRock Rack EPYC3451D4U 2L2T2O8R Rear IO
On the networking side, we get a lot. There is an out-of-band management port for the board. We also have two 1GbE ports via two Intel i210 controllers. There are two 10Gbase-T ports via an Intel X710-AT2. Finally, we get two SFP+ ports from the AMD EPYC 3000 series onboard MAC. The Intel NIC will have more features, but this is one of the first motherboards we have seen that uses the AMD EPYC 3000 series embedded MAC.

Overall this is a very exciting platform. This is one of, if not the most expandable and fully featured AMD EPYC 3000 series platforms from the EPYC 3451 16-core CPU, quad-channel memory, SATA and SAS storage options, NVMe and PCIe expansion options, as well as networking. It is hard not to enjoy the excessive feature set that comes with a motherboard like this and the long model name it entails. We do not have word on pricing and availability yet.
Click to expand...

I’m using the Supermicro version, it’s been a good little unit so far. I’d love to give this a go but none of my suppliers ship ASRock. But the 3451 is a little workhorse.
Stuck server 2019 on it with Hyper-V, have it running my secondary backup DHCP/DNS/AD server on one VM and a 2019 LTSB build of windows 10 on another for all my diagnostic and administrative tools. Plan on running a 3’rd to run Squid Proxy so I can see about getting an internal redirect on our VPN network so I can do a better job of monitoring user traffic on ChromeOS devices.
Last edited: Jan 11, 2021
You must log in or register to reply here.
Share:
Reddit Pinterest Tumblr WhatsApp Email Share Link
Top