I will post more pics cause this is the same pic I took about a month or two ago.
C

Just got my BenQ 24" 11Z. 1ms 144hz. Right now that's just my old desktop hooked up to it with my MSI laptop next to it. Waiting on a DVI Dual link > mini DP adapter to get the laptop on it. Gonna be badass! Always wanted one of these... 8740w with the DC2 panel.
...wish HP/Dell/etc'd stayed away from the MBP-style designs with the recent generations... + full-size keyboards, 16;10 screens, you name it.
M

Got myself a Surface Pro 3 this week. It's a lot more portable than my Envy 17.

Gigabyte P35Xv3... absolutely fantastic and easy to travel with.
R

That is one sexy laptop, with a 980m to boot! How loud and hot does the laptop get when gaming?
H

It depends on the game. On the most demanding games it gets pretty loud, but the heat is typically within spec. With the Cooler Master U2 I've not had it throttle anything yet.

I game with a headset on so the fans don't bother me in the slightest. It's a small drawback given how powerful it is and the convenience of the form factor.

I think going with the 1080p version vs the 4k version helps the heat and noise quite a bit too.

some nice inspiration here, recently swapped over to just being a laptop only user

nb14 said:
some nice inspiration here, recently swapped over to just being a laptop only user
Click to expand...

I tried going just laptop for a while...I couldn't do it. lol

So far so good (it came in last night). It's really very fast, the gpu is solid (not a lot of gaming done yet, just some Minecraft on the train this morning. The speakers kind of suck, but it has a Dolby app that allows you to mess with them, and I suspect that will fix it. My old Samsung Chronos 7 has AMAZING speakers, and tiny bezels, so this one is taking some getting used to. For $800, I couldn't find anything even close, let alone with a matte screen. That said, the battery life is... rough. 2.5 hours doing little things. That's a LOT less than what I was expecting. Though, I rarely need that much time for non-work activities, so not a huge issue in real use.
Last edited: Dec 17, 2015
W

How's the fit and finish? Are the keys on the keyboard backlit? I'm kinda looking at getting one, and would like to know more about it before I jump in.

Welsper said:
How's the fit and finish? Are the keys on the keyboard backlit? I'm kinda looking at getting one, and would like to know more about it before I jump in.
Click to expand...

Yes, and interestingly enough, unlike some keyboards, in full lit rooms, the keymarks show white, but are shown through red when the backlight is on. So in that pictures, you can see the white key marks. But they are red when they are backlit. I will take some pictures later and post them.
Fit an finish is superb. Top lid is black metal. THe bottom is plastic, but dense. The palm rest is a soft-touch I'll have to get used to but is very comfortable to type on. The fan is audible but low-pitched, with a subtle ramp up. i.e., it doesn't go from 0-100%. Very little bloatware. Essentially McAfee IS and about 5 Lenovo apps. 4 are useful system utilities and updaters, the last is a photo app that some people like and others do not.

The hybrid SSD/HDD is nice. It's not as fast as an SSD, but clearly faster than the standard 5400rpm drives OEMs use these days.

The screen is also fantastic. 1080p, but matte finish without any pearlescent effect that can come on cheaper panels. It's IPS so, great viewing angles and deep blacks. It's a TAD saturated/vibrant, but enough to make things pop without overly distorting photos.

Alas, big bezels. My last laptop was this:

So that's something to get used to.
Again, battery life is not awesome. These are Haswell chips, and the reviews show that you can expect, at most, 3 hours of light use. But quad core with HT is nice.
Odd thing, it did not come with Nvidia drivers installed.

How's the chassis flex (if any)? I have a Thinkpad T430 right now

Welsper said:
How's the chassis flex (if any)? I have a Thinkpad T430 right now
Click to expand...

None as far as I can tell. The body has more acute angles, so it will have less flex than the more square Thinkpads.

Er...wow. Can you shrink that image just a little? Haha.

Welsper said:
Er...wow. Can you shrink that image just a little? Haha.
Click to expand...

Er no, in the ten+ years I've been here, I've never seen [H] auto-resize a post, your other ones are fine, just that last one of the keyboard is fuckhuge.

The 17 is HUGE... I am still getting use to it and almost returned it for the 15.6 but I like the extra screen real estate. I think it will be worth it in the long run.

A customer brought in a nice MSI GS60-2PL and I commented how nice it was. He then asked if I wanted one. I didnt take him seriously at all. The next day he came in with one sealed in its original shipping box. We negotiated until we decided on $650 bucks... Holy shit its a good deal and what an amazing laptop. Its insanely light weight and thin, The fact that the coolers are on different sides and suck from the top by the keyboard and shoots them out of 2 vents EACH. this thing stays super cool.
i7-4710QM
850m that can overclock beter then stock 860m numbers.
12gb ram
256 m.2 SSD with another m.2 slot and a full HD slot for upgrades. (in fully ready windows in sub 10 seconds, its amazing)
I was worried I wasnt going to be happy with its gaming performance but I was wrong, Im balls deep into MGS:V, FFXIV, and Rocket league. 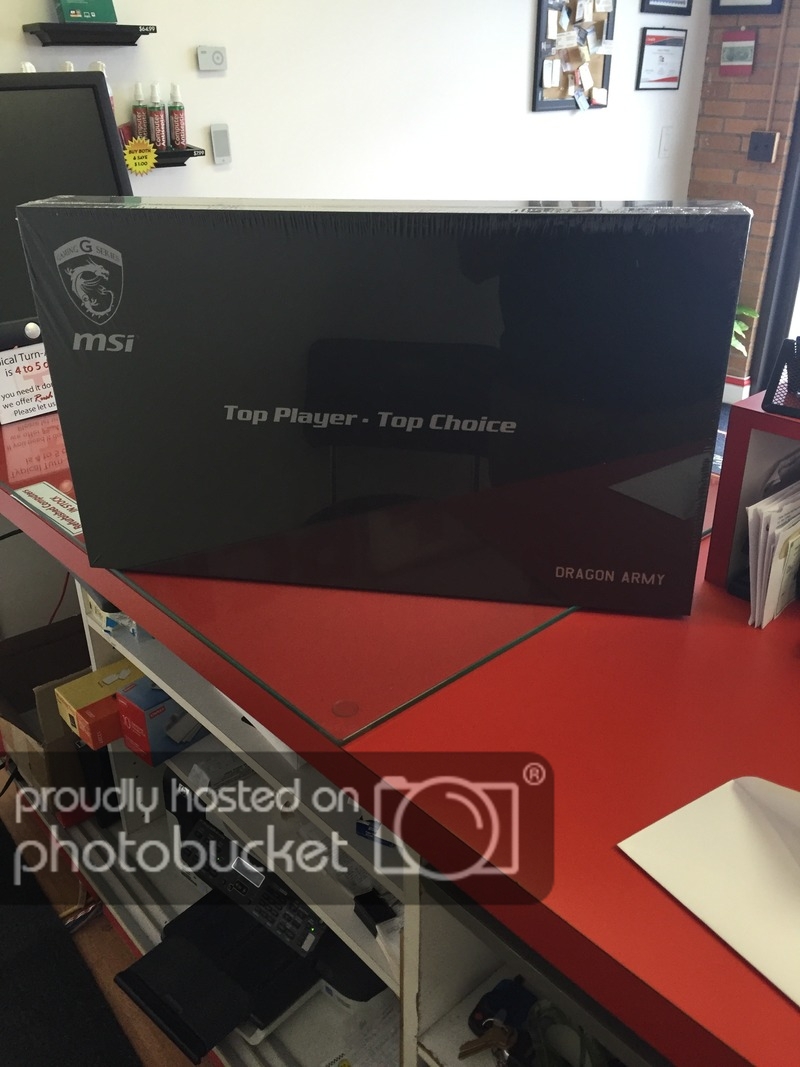 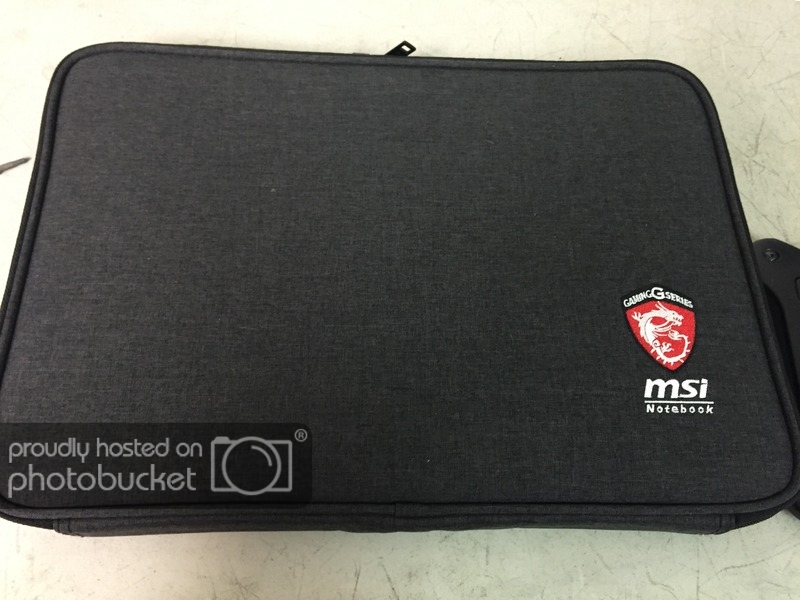 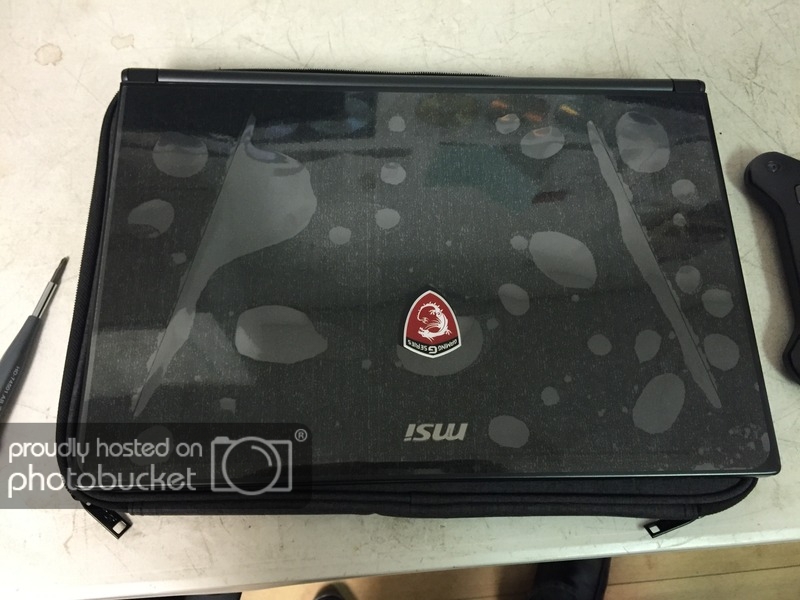 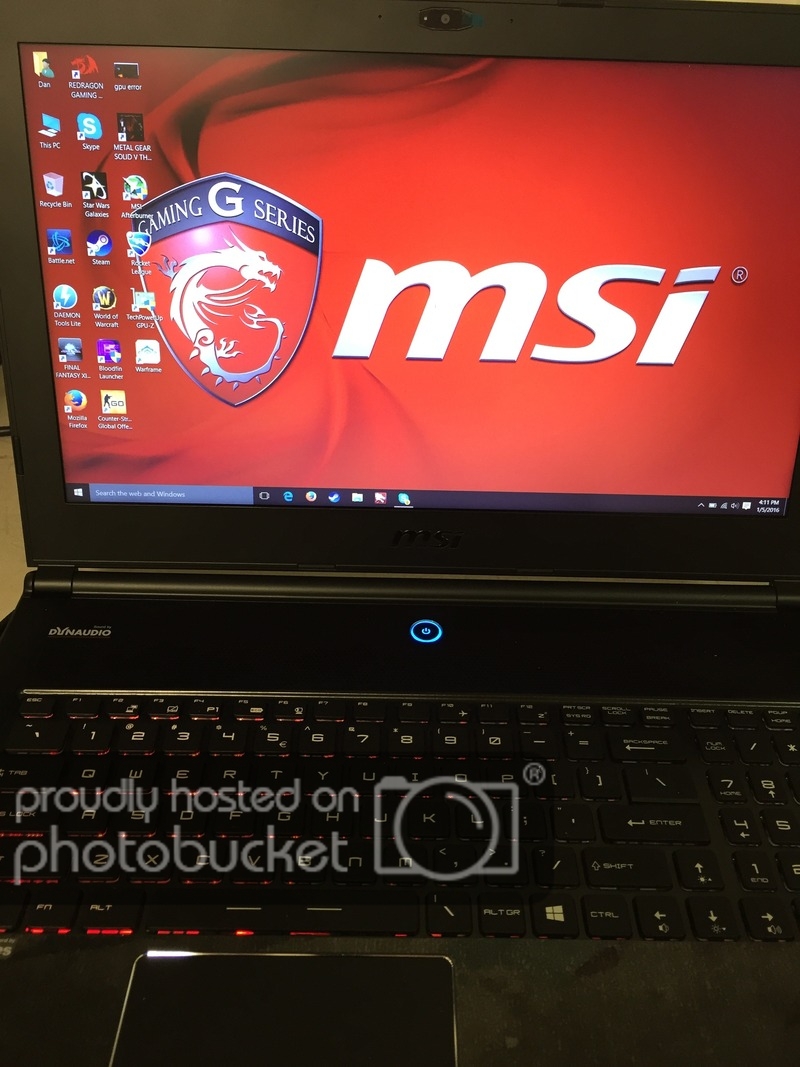 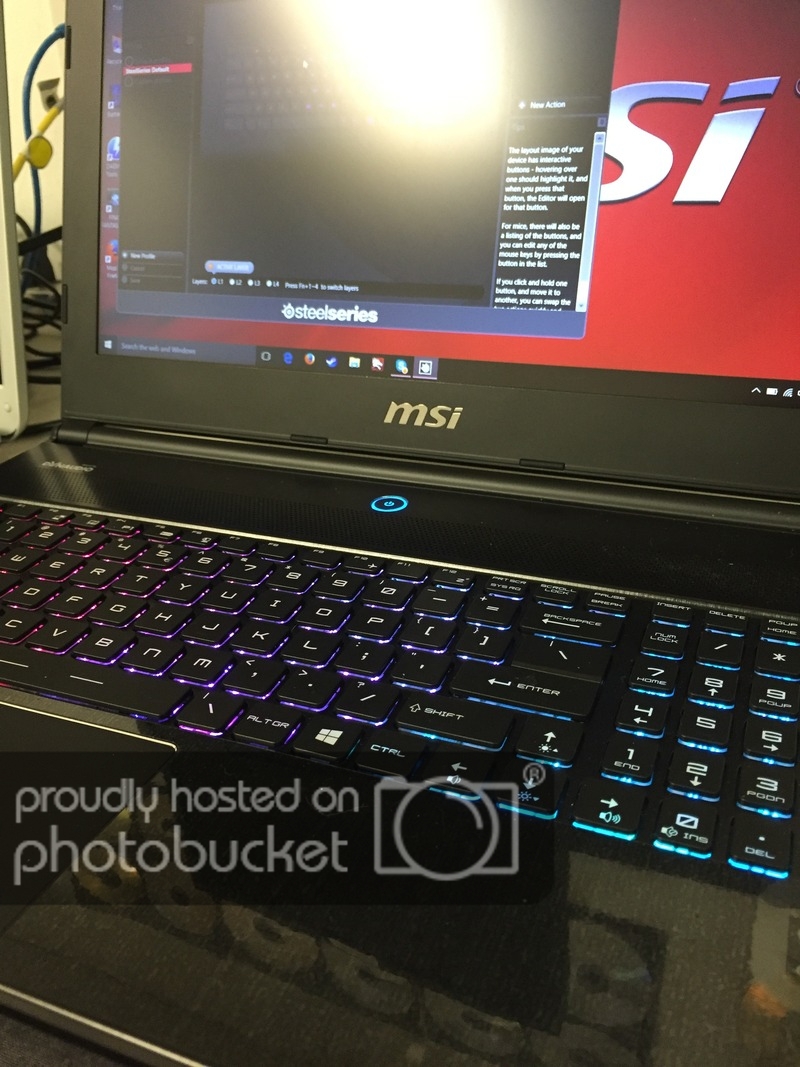 I don't suppose he has another one lying around...? I would totally pay 650 for that lol

I know, right? MSI is making some nice gaming laptops. I got mine for 1099 but it's a little more stout with a 970 and larger screen a little more memory and the cpu might be a bit of a wash depending on what you're doing.. but that slim form-factor is nice. That's a steal for 650. I have to emphasize these things scream with the OS on an SSD - it's nice that comes with one.

My only gripe honestly is the shit-tastic battery @ 1.5 hours to 2 hours of normal use. That and that when you open the laptop up the normal HDD bay doesnt include the cables to hook it up. The 256 m.2 fills up fast when your a MMO player. I called MSI and they banged me 25 bucks to ship the HDD cables which isnt the end of the world. Im IN LOVE with this laptop

Yeah mine is the same 2 hours (6 cell internal battery). Oh well. I love the build quality, screen, keyboard, it's so fast with the OS on raid0 m.2 ssds its almost ridiculous.

Loving it. Expensive for what it is but the build quality leaves nothing out. Not a weird flex or creak in this thing, and it's what I buy for. Gotta last or it isn't worth a damn. I know the screen looks awful in that top photo, but I just couldn't get a decent shot. It's definitely sharper than my u2711 at home from a usable distance.

This is my HP DV7 4060US 17'3" Laptop that I got for free. Friend bought a similar model with an Intel CPU from a co-worker and had me look at it and it needed a new mobo.
He bought the one pictured below as a parts machine for $50, is an AMD CPU and was only lower body, and we aslo bought a 17" screen for $15 from the same guy, had to fix another laptop
for my friend for another co-worker of his.

After sending his board out to be fixed and having the same issue, black screen when the performance GPU is enabled, he decided to just buy another used board online.
So for me having to tear his machine apart a dozen times and replacing the screen on the other laptop, he offered to buy the parts to complete the AMD one and I could keep it instead of him paying me.
So I went online and bought all the remaining parts, Screen, Lid, Bezel, hinges, drive cables, and drive cages. He reimbursed me for the parts I ordered and I got a decent laptop.
I put in a 128GB Crucial M4 SSD I bought on craigslist for $30, a WD 750GB Black, and 8GB of ram.

This machine doesn't work with Windows 10 as there are no drivers for this machine to enable the dual GPU's, the performance GPU won't enable so it can't even play full screen youtube videos.
Other than that, it has been working great, although I don't use it much as I built a desktop to use in the garage in December of 2014. 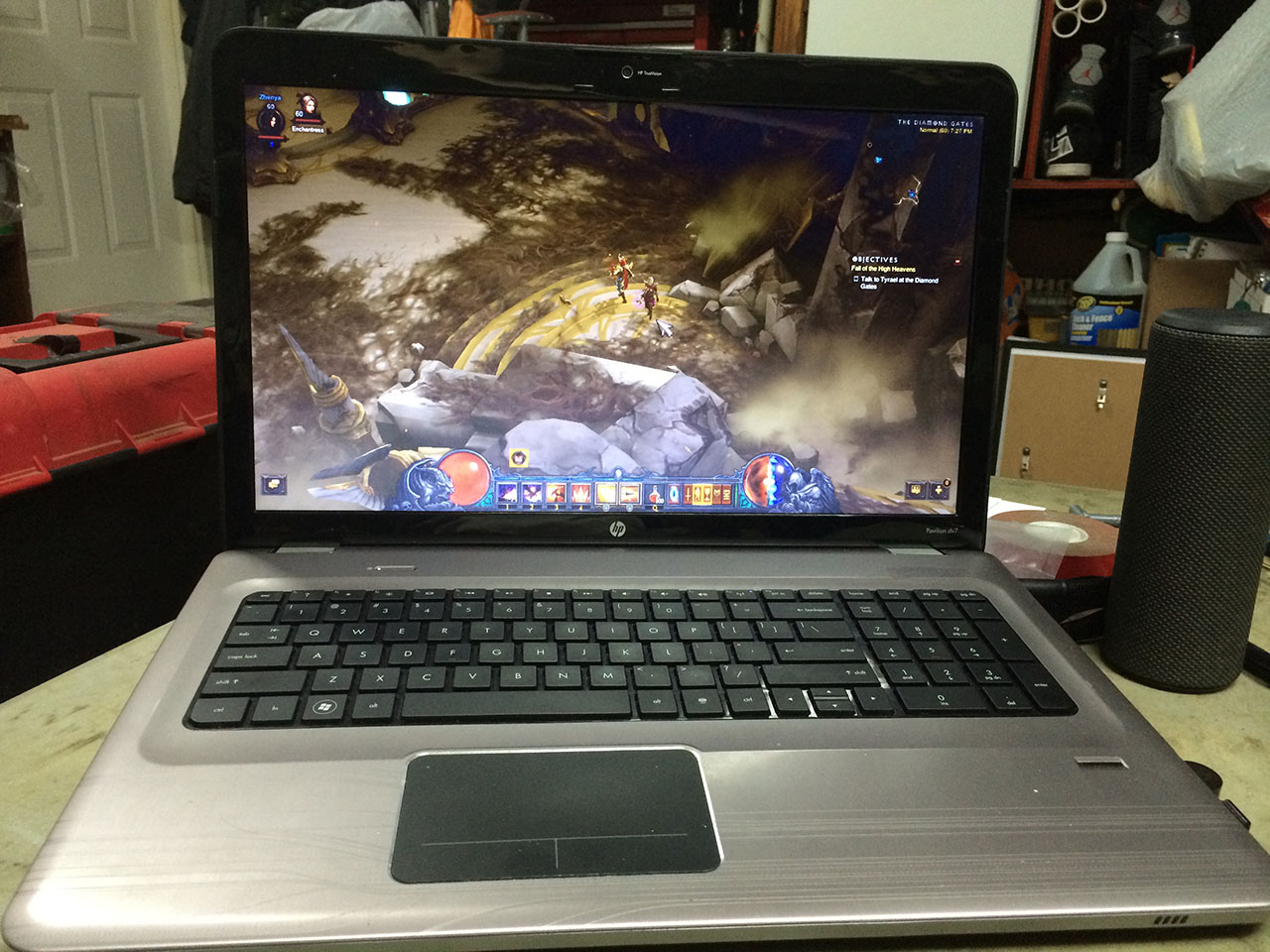 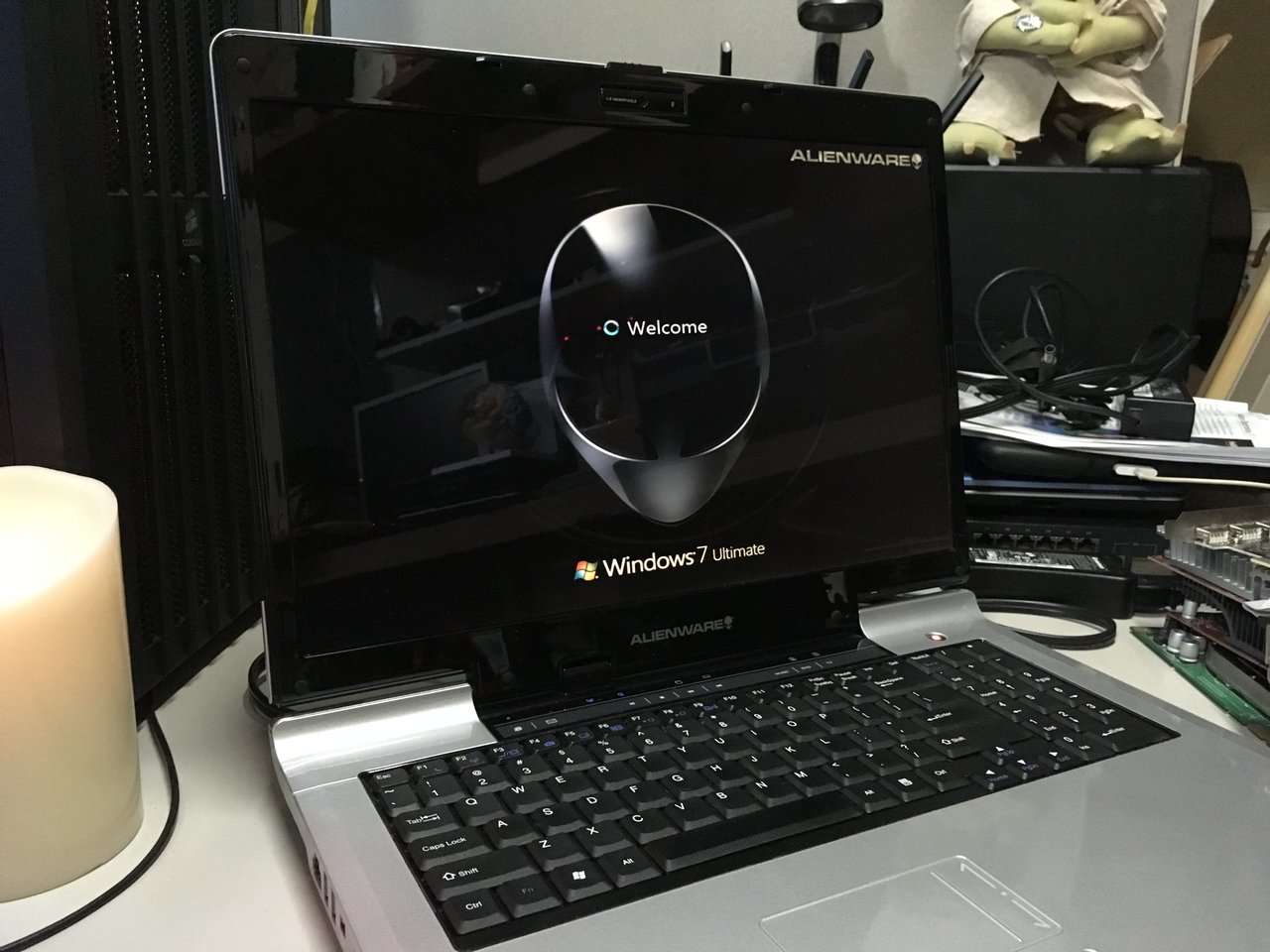 The lack of stickers in this thread is disturbing.
Lenovo T430s 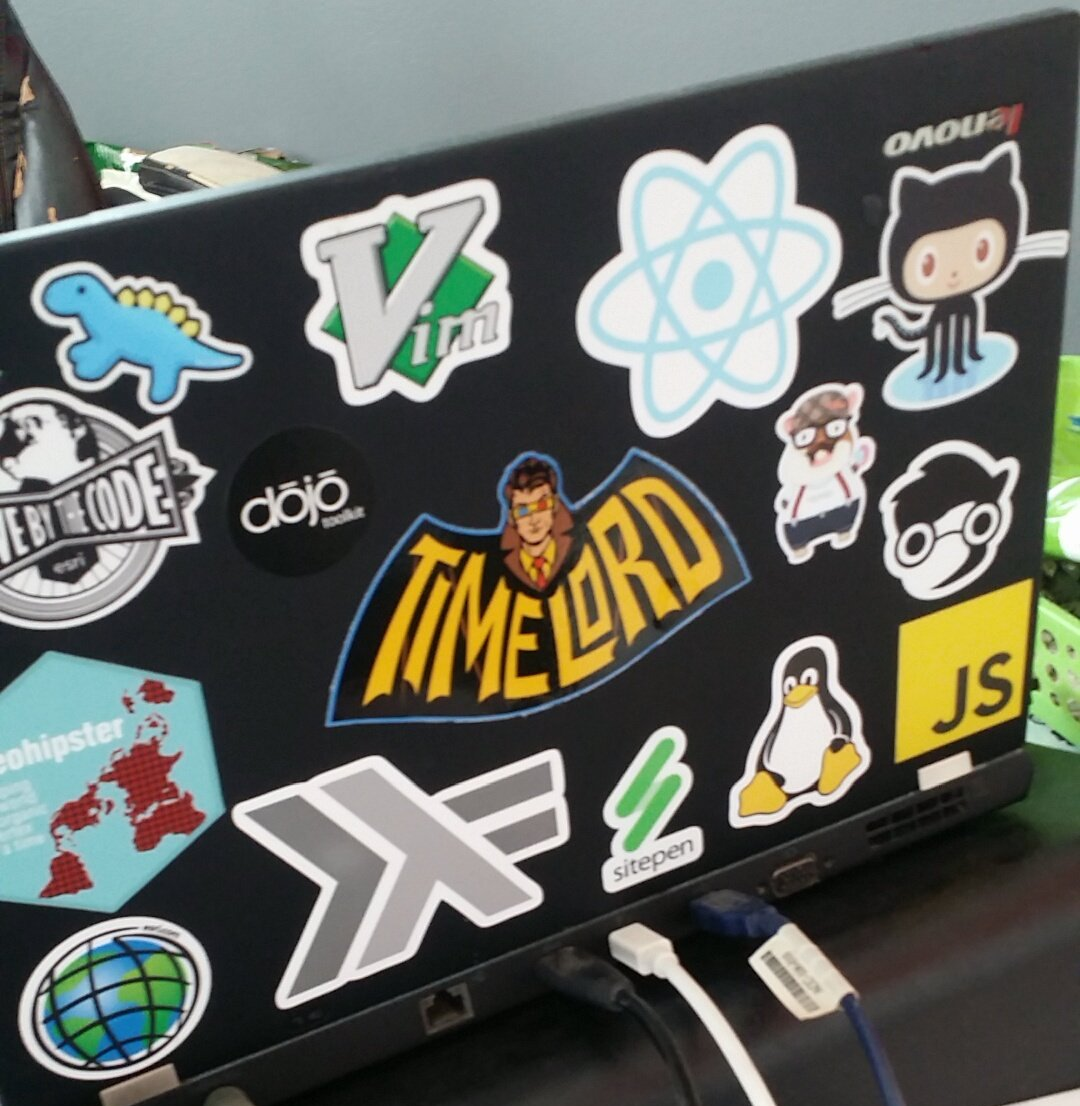 I am really happy with this laptop for the $1700 price it had. Fairly light (around 5lbs) so I can take it with as a 2nd computer on work trips (MacBook Pro shown is my work computer). The performance is insane. Screen is just good, build quality is good/great, keyboard is good.

I highly recommend it. Happy to have a great mobile gaming option now (hopelessly addicted to ARK: Survival Evolved, heh).

I am really happy with this laptop for the $1700 price it had. Fairly light (around 5lbs) so I can take it with as a 2nd computer on work trips (MacBook Pro shown is my work computer). The performance is insane. Screen is just good, build quality is good/great, keyboard is good.

I highly recommend it. Happy to have a great mobile gaming option now (hopelessly addicted to ARK: Survival Evolved, heh).

Does that thing get warm?

Watched a review on an older model (the one with the 970M) that the back exhaust ports are blocked when the screen goes up and it gets quite hot.

Planning on picking up the 1060 variant, though I find the highlighted WASD keys a little too gamerish.

mda said:
Does that thing get warm?

Watched a review on an older model (the one with the 970M) that the back exhaust ports are blocked when the screen goes up and it gets quite hot.

Planning on picking up the 1060 variant, though I find the highlighted WASD keys a little too gamerish.

My other option is waiting for the Lenovo Thinkpad P50 successor with Kaby and a decent Pascal chip
Click to expand...

I can finally contribute here! Will never buy and/or build another gaming desktop again after my experience with my new Razer Blade. Macbook level build quality (not exaggeration), decent battery life for a quad-core "gaming" laptop with a GTX 1060 inside @ about 5 hours on-the-go. I honestly am amazed they were able to fit all that in a laptop this thin. Fantastic keyboard, great trackpad. Could not be happier. Have it paired up with a Razer Core with a GTX 1080 inside so when I am home I can do some serious gaming. I put a black carbon fiber dbrand skin on the lid to hide the glowing Razer logo, but it looks sick too. 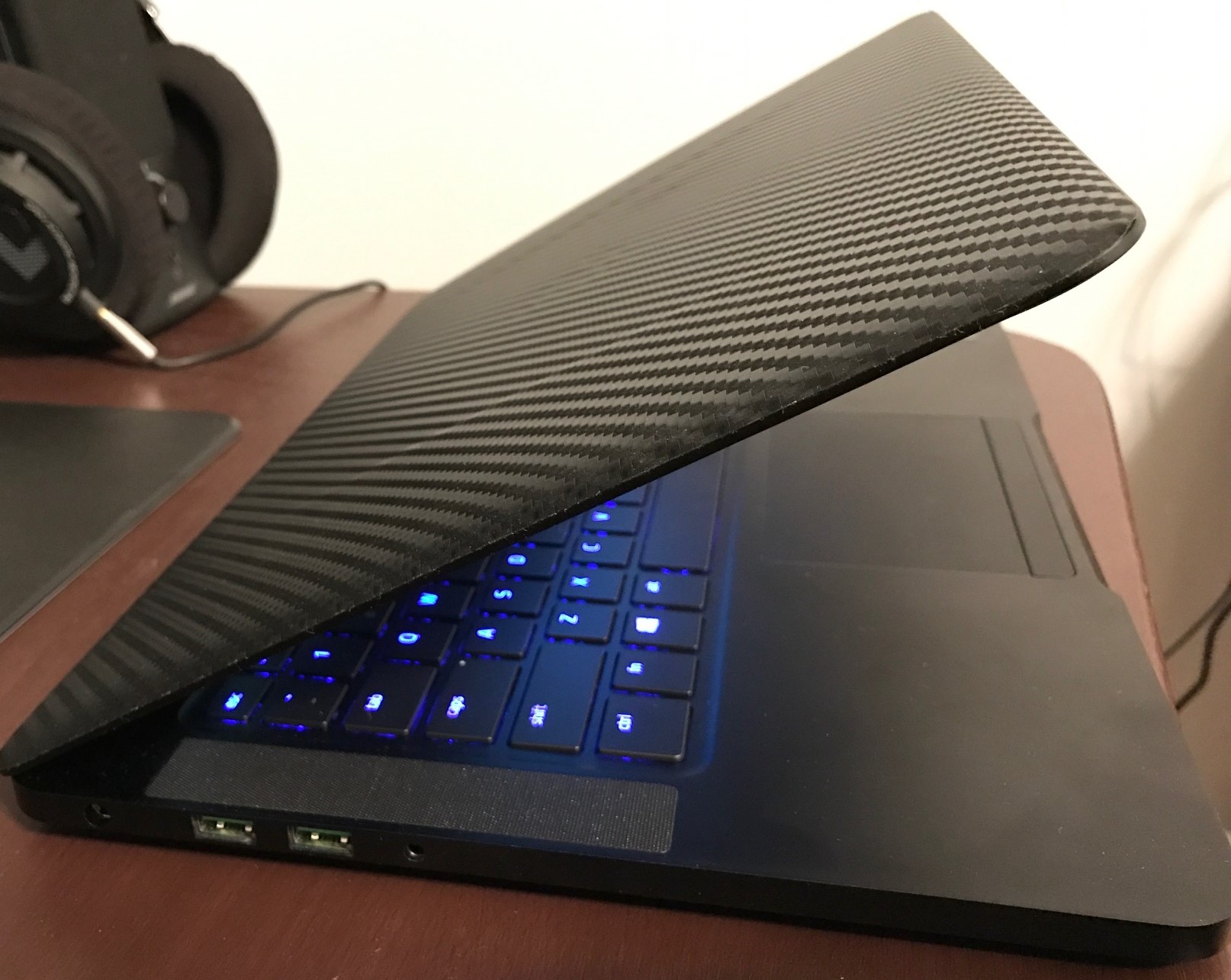 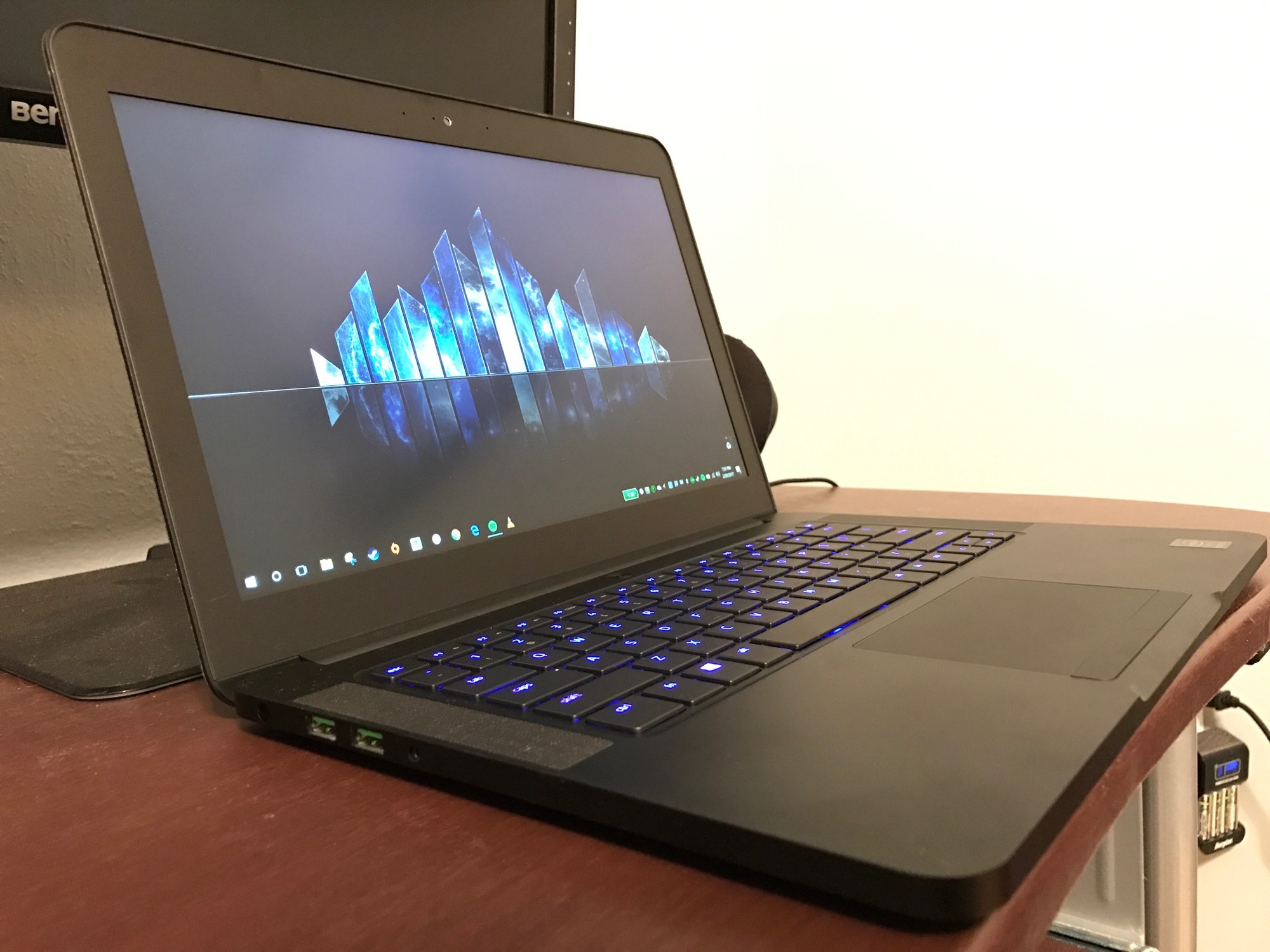 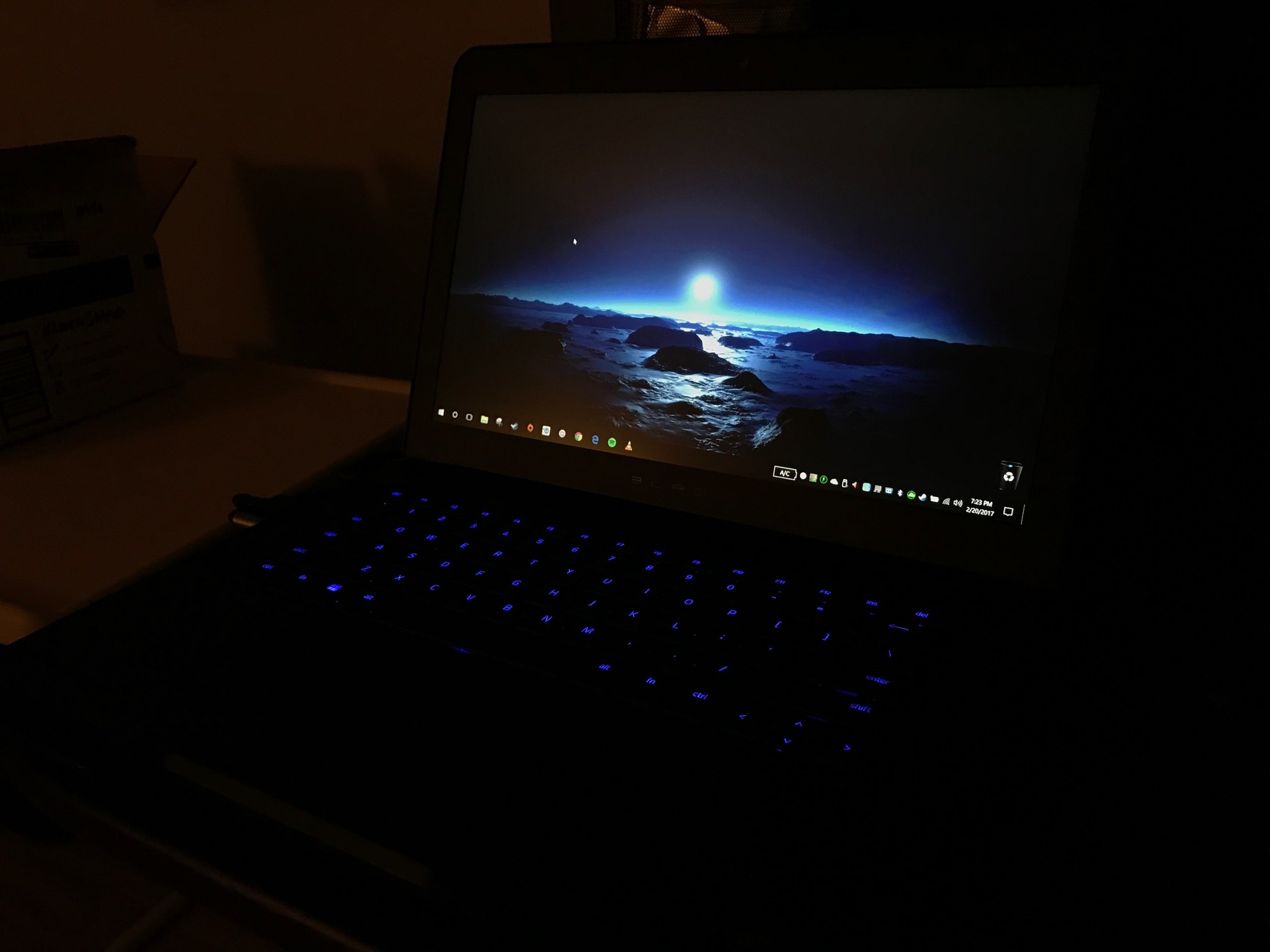 And finally, the completed at-home setup with Razer Core: 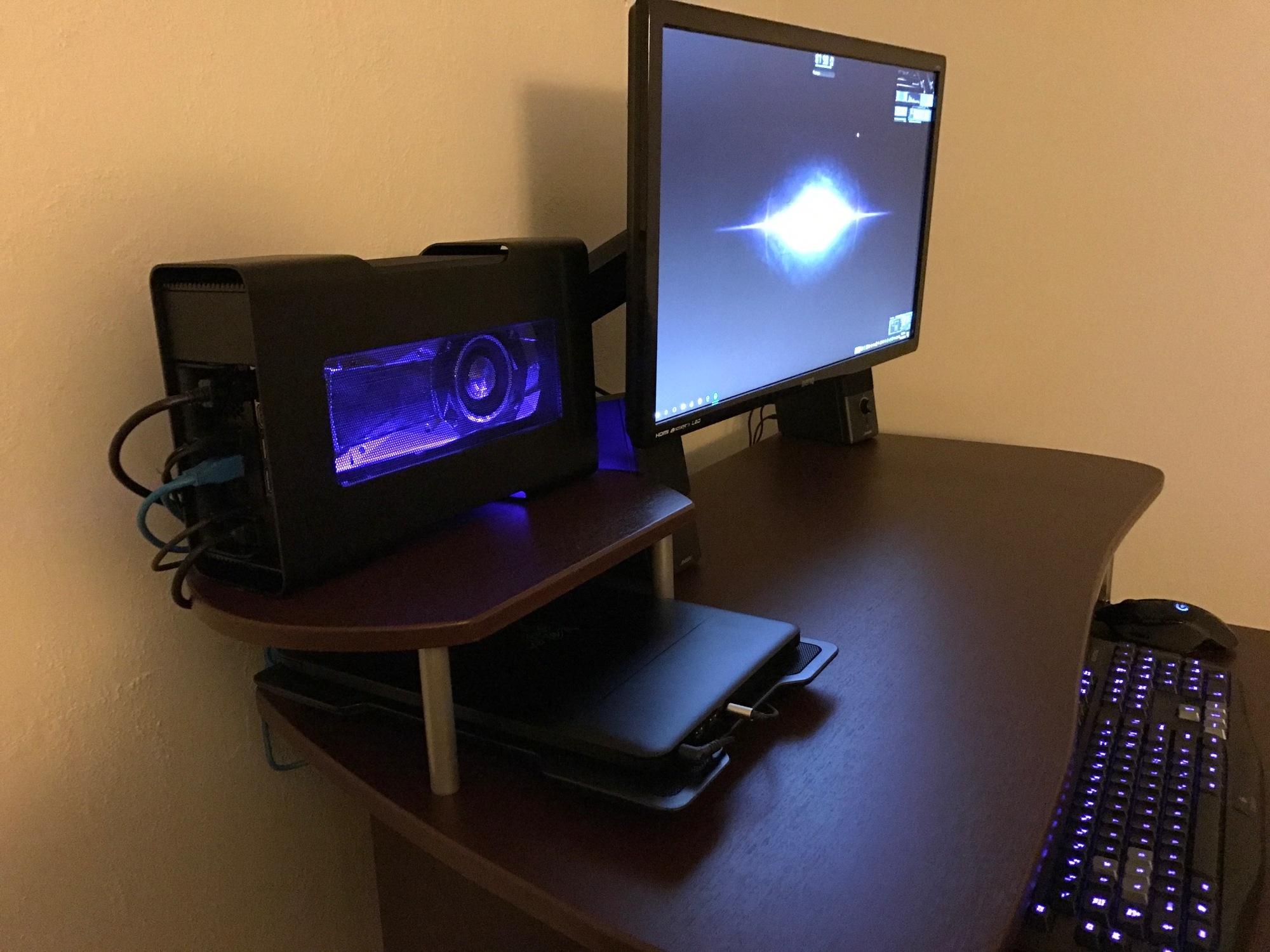 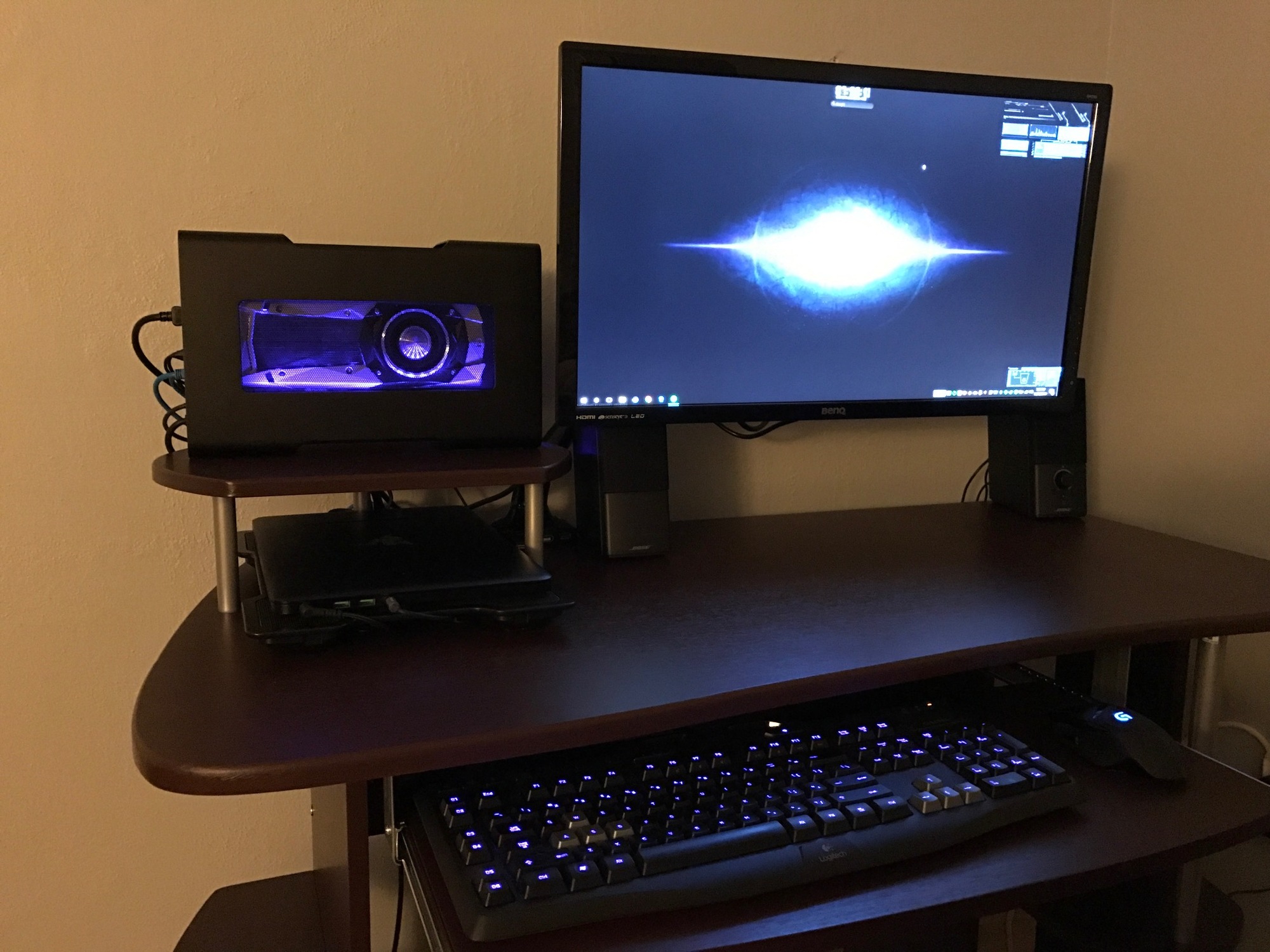 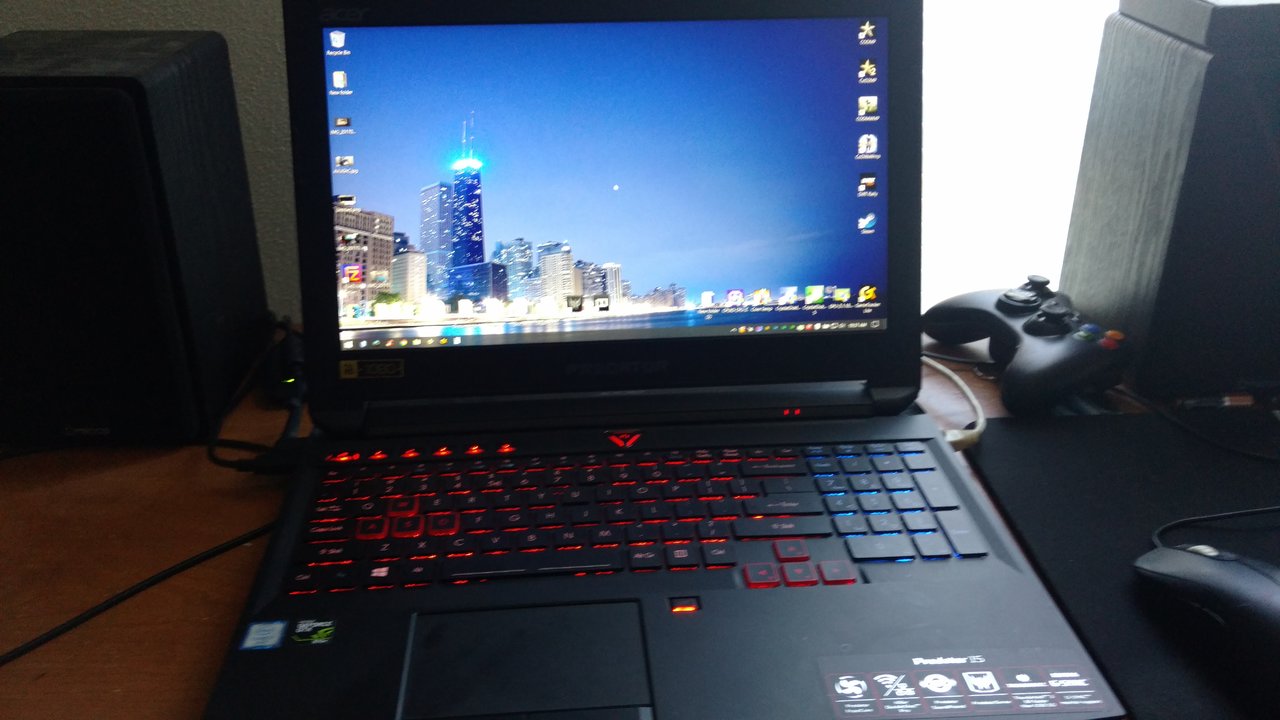 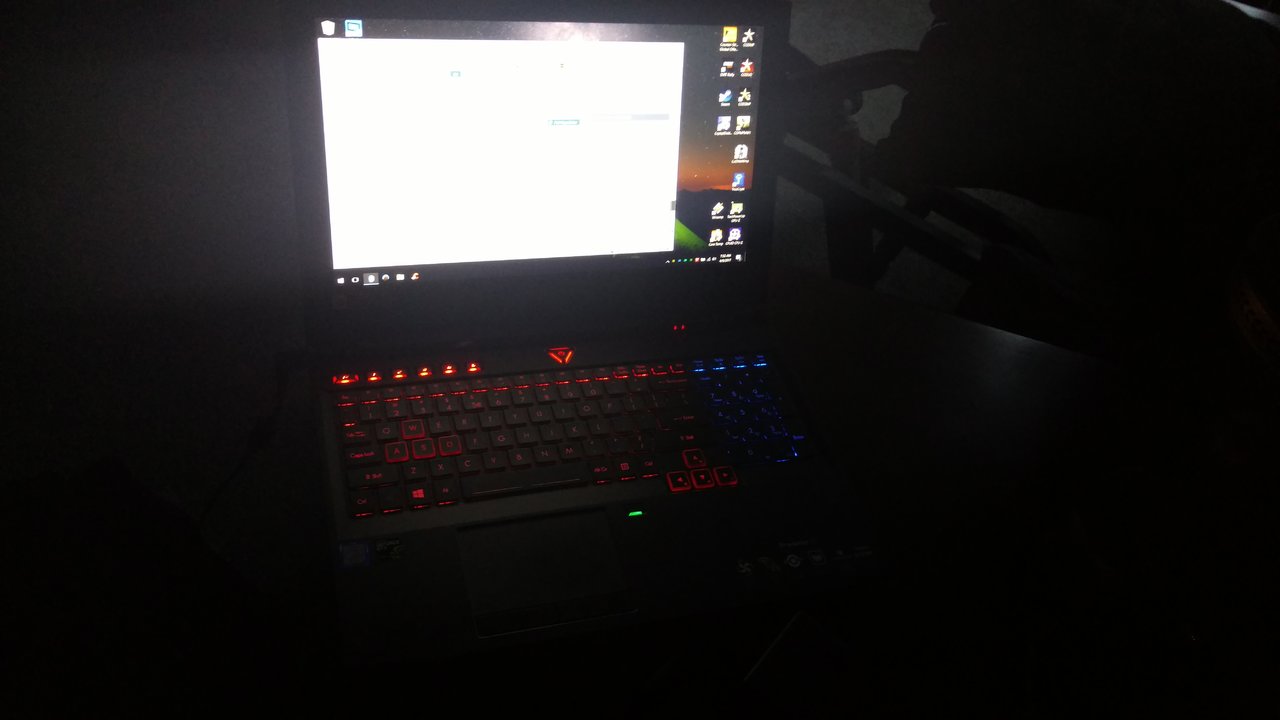 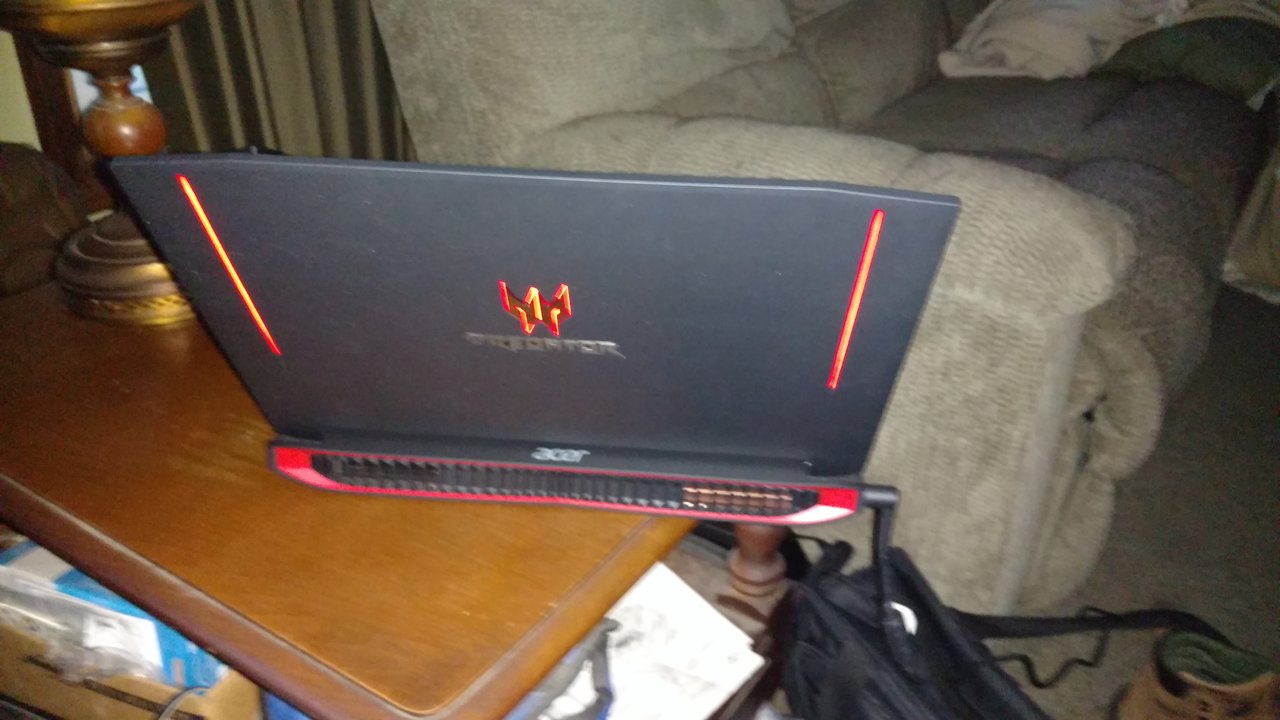 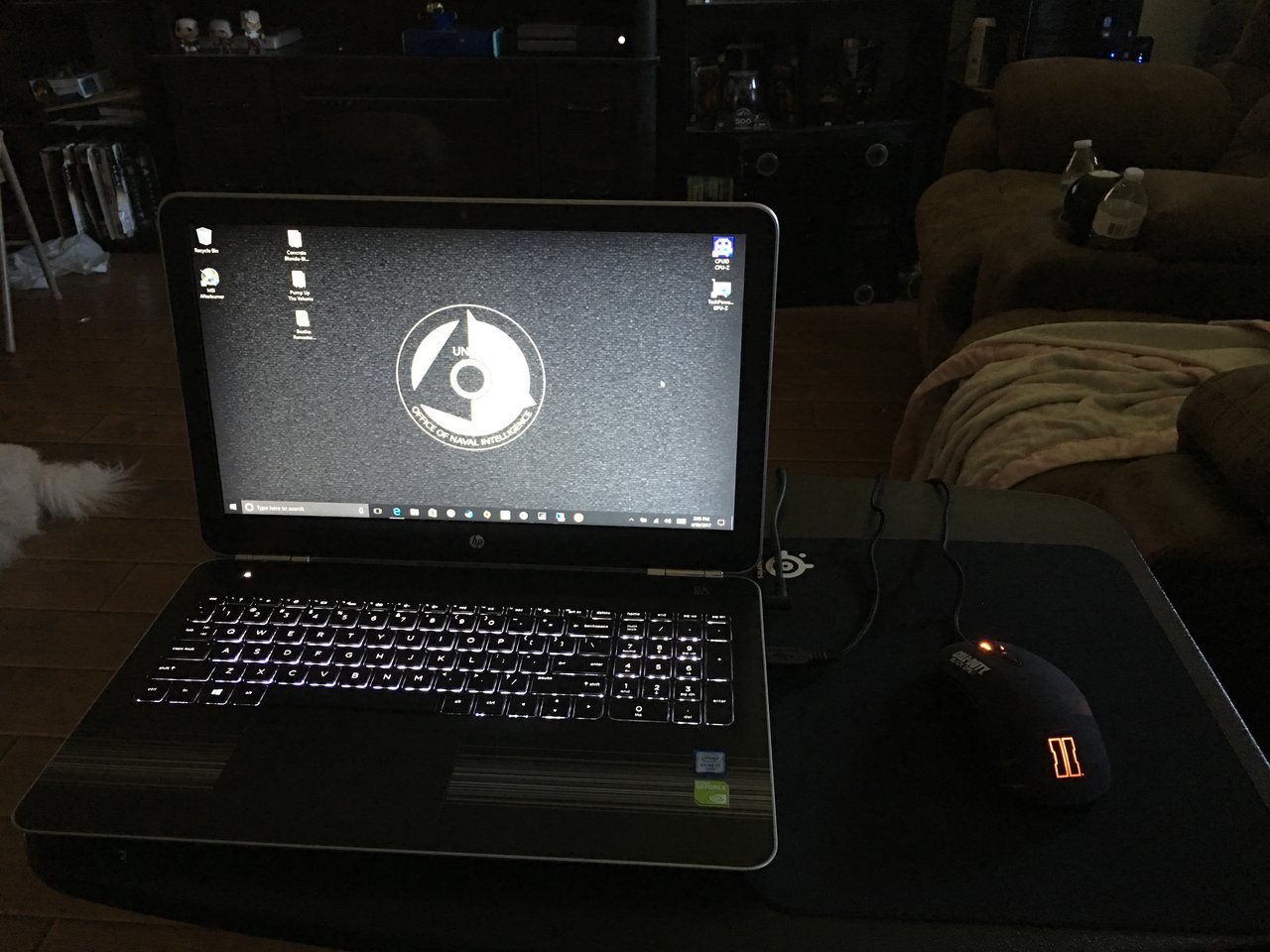 She's not much, but she's mine. HP Pavilion, I7 6600U, 12GB RAM, Nvidia 940MX. Best of all, only cost $250 brand new.
You must log in or register to reply here.
Share:
Reddit Pinterest Tumblr WhatsApp Email Link
Top