heatlesssun said:
Cons:
1. Lack if multiple monitor support for Modern UI apps
2. Start Screen lacks good automatic management and management tools
3. Can present a learning curve and there really is no in the box training or getting started material

Pros:
1. Much better on tablets and touch than previous versions of Windows
2. Better integration with cloud services that allows for synching of settings, web favriotes, etc.
3. Much simplified file backup tool in File History that while not as advanced as the file versions in 7 & Vista is probably more useful for average users.
Click to expand...

Opened my eyes a few things that I didn't know about. Good post.


Eman D. Rahym said:
Why? What possible purpose could this serve other than to stir up yet another pointless debate?
Click to expand...

You are unable to provide any cons, which is what this thread is about. I'm not trying to change your mind either, this thread isn't about that. It's about pro's and con's, which you are obviously unable to have a discussion about.
G

Pro's Con's
After being forced to use it for a month I'm still unsure about it, there's a great deal of improvement but microsoft needs to allow choice.
K

Cons:
Drivers. Look at the Intel RST release notes and it's mostly Win8 issues. If Intel is behind that doesn't sound good.
P

-It's faster, because MS wants it on tablets and ultrabooks, so they made it leaner, which is nice for desktop users.

-They renamed MSE and called it "Windows Defender", slightly confusing as they were seperate programs in Vista and 7, but nice since now most people have protection by default since it comes with the install.

-Everything that MS could do to annoy desktop users with their new UI they did. From lack of a start menu to a ribbon based file explorer.

-Metro menu is gimmicky on a desktop, full screen metro apps are annoying and don't even allow you to multitask with them. Run Netflix on Metro and then go back to your desktop and watch what happens.

-There's no detection mechanism on determining whether the user actually has a touch screen enabled device or not. This should be implemented and be an option within the control panel so touch screen users default to Metro, and home pc users default to the Desktop with a start menu. Or simply make it user configurable.

-All of the default metro apps and cloud services are from Microsoft. I mean it's not really a surprise as it's their OS, but as we have learned in the past, the best way to gain a monopoly on something is to make it the default. I just find it slightly disconcerting that MS is surviving based on this recurring theme. When someone buys a prebuilt, it comes with Windows by default. When they want to get online, Internet Explorer is there by default. Now when they want to use cloud storage for example, people will familiarize themselves with SkyDrive since it's a default metro app.

-I find more "That's annoying" things than I do "That's cool" things when I use it. I think I would like it more on a touch screen but I haven't tested it yet there.
Last edited: Feb 8, 2013
P

When I think about Windows 8 I think how cool it would be to have it used as something like say a multipurpose touch screen thermostat. Control your indoor temperatures, lock individual doors, turn on fans, open the garage, that type of thing. But then I think about my general experience with it on the desktop and I become filled with rage that overcomes the original fantasy of its potential.
H

PornoSatan said:
-Metro menu is gimmicky on a desktop, full screen metro apps are annoying and don't even allow you to multitask with them. Run Netflix on Metro and then go back to your desktop and watch what happens.
Click to expand... 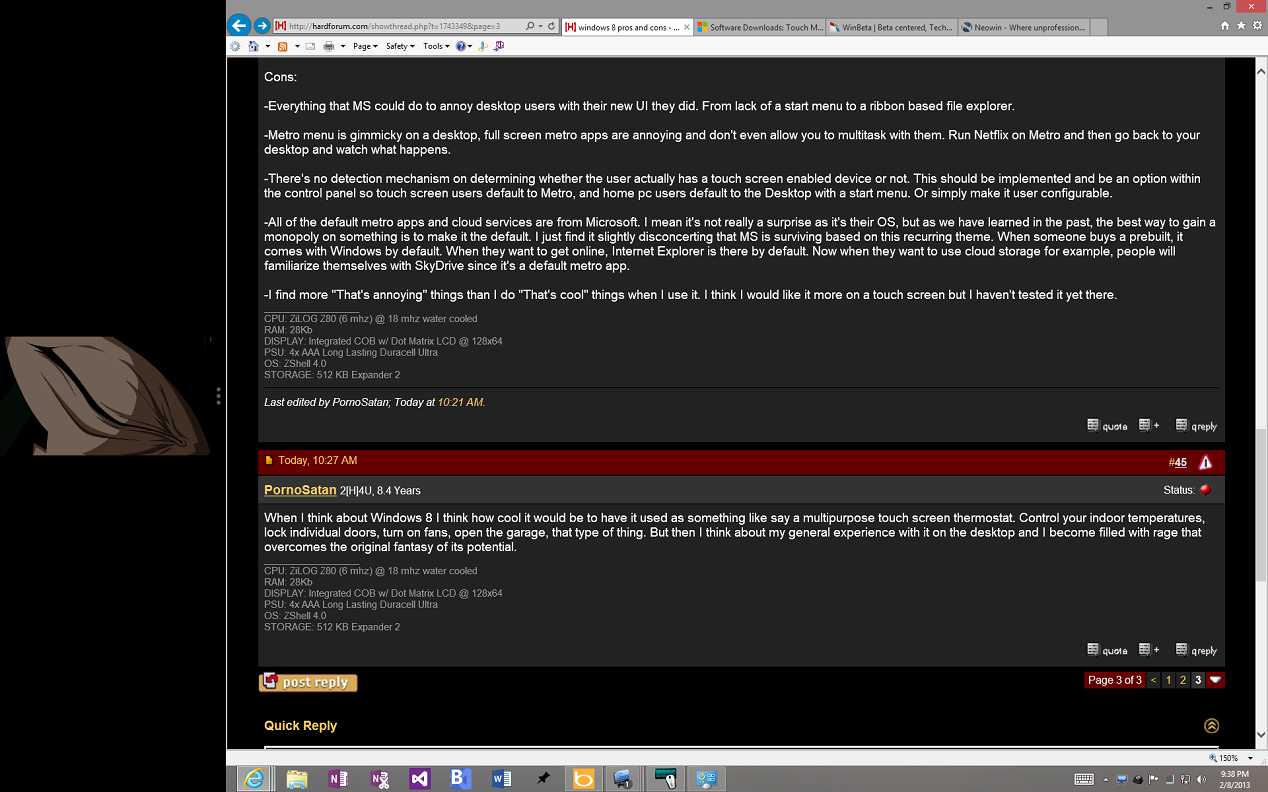 Most audio playback and streaming apps will also run in the background while not visible. Netflix will pause while not in view but does support snapped view. While I know many people want Metro apps to behave like desktop apps with free floating resizable windows, that's why the desktop is still there, the metro app views are much quick and easier to manipulate with touch. As more and more apps are better supporting it the snapped view is becoming more useful and this works even on the desktop, particularly lower res screens on a lot of laptops.
You must log in or register to reply here.
Share:
Reddit Pinterest Tumblr WhatsApp Email Share Link
Top