Why would my desktop suddenly stop recognizing my second monitor and how do I fix it?

Why would my desktop suddenly stop recognizing my second monitor and how do I fix it?

When I start my computer, the BIOS message appears on one monitor in my dual monitor set up.
But when the computer login message appears on my windows operating system, it appears only
on the other monitor, and the desktop does not spread to both monitors.
Rebooting used to solve this problem last week, but now even that fails.
Please help.

Have you told it to display on both screens when in windows?

The reason it doesnt display on both screens on boot is because the gfx card chooses a single display as default.
The way to change which display it displays boot on is to swap the cables round.

I will get the monitor and cable specs soon. In the meantime, is there a way of getting the graphics card model number and GPU Driver version without opening up the CPU case? Is there a command line or some freeware I can run that will dump out all the computer hard drive information in an ASCI file?

Since I last posted here, I tightened the cable connections of the cables on the back of the CPU and rebooted. This fixed the problem for about a day and I had both monitors in use.. I stepped away from the computer and the system went back to a single monitor desktop.

Nenu said:
Have you told it to display on both screens when in windows?

The reason it doesnt display on both screens on boot is because the gfx card chooses a single display as default.
The way to change which display it displays boot on is to swap the cables round.
Click to expand...

I tightened video cable connections on the back of the CPU box and it went back to the dual monitors on reboot. But it did not last and after I stepped away from the computer, I returned and it is back to the broken single monitor desktop.

I will swap the monitors next.

Nenu said:
Have you told it to display on both screens when in windows?

The reason it doesnt display on both screens on boot is because the gfx card chooses a single display as default.
The way to change which display it displays boot on is to swap the cables round.
Click to expand...

Nenu, this post got me thinking that this might be an OS update glitch. So, I gave something a try and it has worked (so far). But I want to keep this thread of discussion open here just in case this is only temporary.

Now, let me explain what I did and why. I started to suspect this was a Windows 10 operating system glitch of some kind because most of the time these sorts of problems are software related and not hardware related and, I am sure you know, Microsoft does these periodic updates to users computers remotely from time to time. So, what I suspected is that, one of these updates had an undocumented and uncommon bug in it. Since my computer is one that was built by hand, it might be susceptible to a problem that Microsoft would either think is too uncommon or they would not test for.

I was not the only person who thought that a clue to the problem was the fact, as i first stated, the BIOS came up on ONE monitor and the Windows logon screen came up in the other monitor. Humm...

I was trying everything I could think of with what windows had to offer in the options that came up when I did a right-button click on the desktop and nothing worked. The Operating System was simply failing to recognize the unavailable monitor. 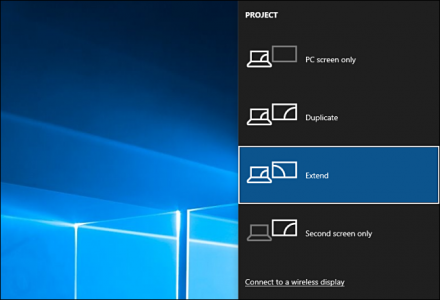 Someone suggested this and just as an exercise of trying everything I gave it a try.

Ever hear "the truth is stranger than fiction"? It worked. But it worked in a very weird way.

The position of my monitors had to be moved so that the one on my left was on the right and the one on the right was on the left (I think many people can relate to this. Many of us can remember a moment when we would be able to move the mouse cursor all the way to the right of a dual monitor system and it pops up on the monitor on the left.). This kind of makes sense. The system seemed to be confused as to which monitor should be the main one and which one the desktop should extend to. And this windows command seemed to iron out the confusion.

But I want to keep this thread of discussion open. Let's see if this fix sticks.

So, let's keep this discussion thread open. I will update it with my system information according to your suggestion. It might give a clue as to why things went wrong and if this fix is temporary, we will need to revisit this topic.
M

Right click desktop and select display options. There you can configure screen position, primary and secondary, clone or extend, etc.

to me as well. Considering he screwed it in, sounds like DVI. A lot of tiny wires that can break over time. I'd go with hdmi to dvi adapters and replace with an hdmi cable personally.

well, faulty cable or not, for now it is working the way I told in my last post. As the saying goes, if it is not broke, don't fix it. I will revisit this thread if things go back to a single monitor again.
You must log in or register to reply here.
Share:
Reddit Pinterest Tumblr WhatsApp Email Share Link
Top