What is your Widows timeline?

What is your Windows version timeline for your primary PC? No dates, just the versions. 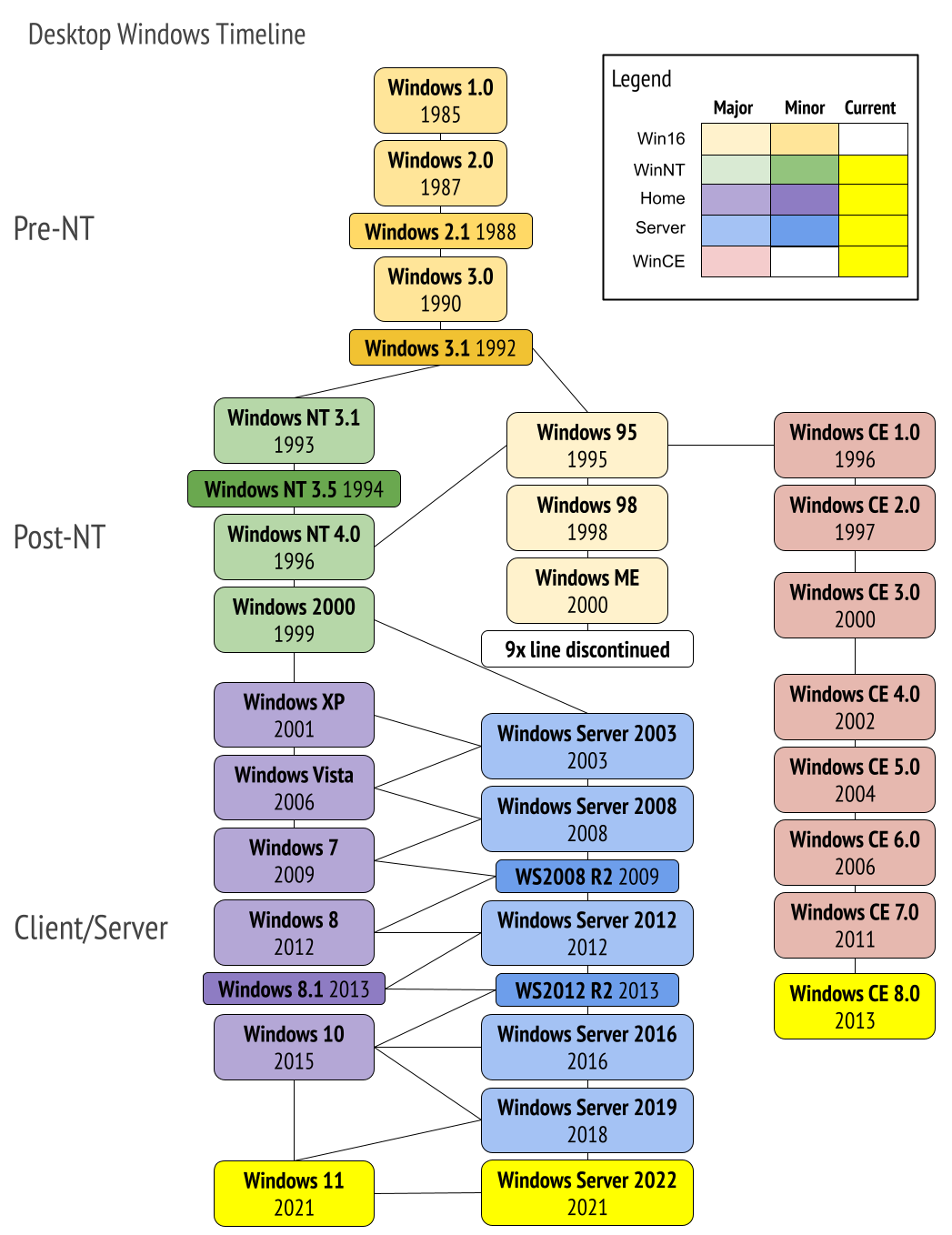 For my personal pc's

I think I have the most classic/boring timeline, never went against the grain and usually waited to jump that it got tested by people I knew if it did not came on a new computer

I don't remember using Windows 8 outside of trying it for a few weeks...same with Windows 11

Hmm, why, has she got something planned for me?

I ran Windows ME for a few minutes. It blue screened on boot after install twice, then formatted the drive and put whatever OS was out at the time back on.

Adopted versions:
Windows 3.1 first windows version I've had on my own computer
Windows for Workgroups 3.11 (basically the same as 3.1 but with networking)
Windows 95 (early adopter, but at this point I'm still using the computer in Dos mode like 99% of the time)
Windows 95 OEM Service Release 2
Windows 98 (still with DOS mode, but by this stage default is booting into the UI. stayed on it as long as possible to keep DOS compatibility)
Windows XP Pro (late adoption. if I remember correctly I only switched over when SP2 was released)
Windows 7 Pro (first 64 bit OS, I held on to XP until about 2010)
Windows 10 Pro (made the switch relatively early in 2016, but only due to DX12 pressure, and I still don't like this OS, if there were no artificial pressure to switch I'd still be running 7.

Major versoins I tried then skipped:
Windows 98 SE: I've tried it, but for some reason basic 98 was much more stable for me
Windows ME: basically win 98 with bloatware and no DOS mode.
Windows 2000: compatibility issues, and extremely long load times sealed its fate.
Windows 11: while it's possible to avoid I'll avoid it no small icons, and no separate mode with titles on the taskbar is not something I'd put up with, it's bad enough that W10 is grouping instances, instead of showing apps in the order I started them.

All versions from Windows for Workgroups 3.11 and on, literally. I even had Windows NT 4.0 installed for a short time. I had Windows Vista Home, Windows 8 and 8.1 as well and as used Windows Me for a period of time. And I was just reminded above, I had WinXP64 installed as well.
T

edit: i forgot windows 8, which was the last version that had windows media center rip to one of the g.o.a.t.s.

Hey, in that chart, I just noticed that you are missing Windows for Workgroups 3.11

I've run all of the consumer-based Windows versions since Windows 3.1. That includes both the 9x versions and NT versions. Never needed to run server or CE, though.

For all the grief Windows ME got, it actually worked great for me. Windows 2000 wasn't quite ready for prime time as a gamer and it had 3 years worth of updates baked in. I used to format pretty often in those days, so it was convenient having Windows 98 with all the updates/fixes. Still, Windows XP was a game changer. There was no looking back after that. I started running betas of that one and they became my main OS immediately.

Domingo said:
For all the grief Windows ME got, it actually worked great for me.
Click to expand...

same, ME ran fine for me, same with vista. vista just needed more power than xp.

Vista ran fine for me but I definitely had problems with Me, but Me was on a prebuilt HP too so who knows what was really the problem (I was also just a normie when I had that Me computer, knew nothing except how to play games and download music)
L

There were also several dual boot years with linux (various distros). Never ran Win 98 or ME, I thought they were useless at the time because the Windows NT line was the only possible future path for MS.

Thanks to steam deck I am considering finally moving to linux rather than supporting MS and their Win11 mobile device like lockdown initiative for PCs.

I never had any issues with Vista or Windows 8/8.1 for that matter. I actually had the same install of Windows XP that was upgraded to Vista and both versions of 8 sans any issues. It wasn't until Windows 10 that I ended up having to do a clean install to fix issues. I had to do that 2-3 times with 10 and the issues were almost always related to borked UWP apps.

amiga and dos are NOT windows versions. jesus people...

Of course, that does depend quite a lot on version of Windows, just saying.

Darunion said:
For my personal pc's

Plus 1 for running many of the "weirdows" versions.
W

Os/2: the better windows than windows

cjcox said:
Plus 1 for running many of the "weirdows" versions.
Click to expand...

Yea those were some 'experiences' lol. Taught me a lot of the phrase 'new and improved' really is "new" or "improved".

Every few years Microsoft rolls out a new version of Windows just for the hell of having something new. It's not to say that they had no advantages, but they just weren't necessary as a totally new OS. Yet the middling ones aren't always the problem children. I'm a sucker for new stuff, so I've run 'em all from launch (or even advanced beta) until something newer comes out. Windows 10 is still the OS that has given me the most issues since things went NT and it was absolutely a necessary release after 8.

Who cares and besides, you are right, they were better.

I didn't really get into using Windows until Windows 95 though.. and NT 4.0 at one of my first jobs and my first computer I built i had Windows 2000 on it (had early Alpha and beta builds i remeber). pretty much tried every Alpha / Beta of OS after that until Windows 7 came along.

I didn't really get into using Windows until Windows 95 though.. and NT 4.0 at one of my first jobs and my first computer I built i had Windows 2000 on it (had early Alpha and beta builds i remeber). pretty much tried every Alpha / Beta of OS after that until Windows 7 came along.

NT didn't even understand ethernet until like SP4 or 5. Bad memories.
V

I used every windows from 3.1. I upgraded as soon as the newest one is released. I did use windows 2000 between ME and XP.
H