I'm wrestling with my long-in-the-tooth sandy bridge system going down with a BSOD and, thus far, being unsuccessful at getting through POST. In some ways, the symptoms remind me of how my first Soyo P3 motherboard died from the plague of capacitor industrial espionage of that era, although at least that tended to give some visual signals.

In these days of mosfets, "ultra durable" designs, and solid state capacitors, what should I be looking for as far as components that fail?

The majority of the time when i try to start it's just the psu rails powering on fans, etc and the video doesn't even come up before it powers down, then restarts. It seems like a slightly longer power-off state will allow me to occasionally enter the bios or see the post screen, but I've not yet achieved a full boot from that.

There has long been a dual-boot issue with the ga-p67a-ud4-b3 where restarting it would sometimes cause a very short no-POST half boot (you'd see/hear the psu, fans, water cooling pump power up but it wouldn't even enter bios) followed by a brief power-down and then a full boot. This current bootloop is mostly like it's doing that over-and-over and not posting. I did find some people talking about the gigabyte dual-bios setup sometimes causing odd issues and looked up info about copying slave to master bios, but the symptoms being on the boarder between hardware-like and bios-like but without sustained uptime makes me really hesitant to try overwriting any bios files.

full disclosure: I changed the case about a month ago but otherwise hadn't been messing around with the internals or even BIOS settings for several days leading up to this boot-loop.

I would start with the obvious, check all cables, remove all unnecessary hardware for booting and try like that, if that fails, try a different PSU if possible.

You said that you can sometimes enter the bios, have you tried backing down to default clocks, etc?

You could've "cooked" the board with ESD while swapping cases....

Denpepe said:
I would start with the obvious, check all cables, remove all unnecessary hardware for booting and try like that, if that fails, try a different PSU if possible.
Click to expand...

Did a strip-down last night and, at one point with no RAM modules, was able to get the 1 beep bios error signals (i believe it would be a no ram error). I also swapped the PSU and observed the same behavior.

A bit of an update this morning. I was able to get the gigabyte dual bios over to the backup bios using the "hold power and reset button for 10 sec" method and it did a full boot into bios, while also giving a cmos checksum error. Because everything had gone back to defaults due to cmos clearing, my USB-wireless keyboard/mouse weren't working so I sat back and watched the automated "failsafe default" boot and then windows was failing to start because it was looking for files on a D drive. I presume losing ahci and perhaps boot-disk settings made windows unhappy.

So, yay, I think the hardware isn't dead, but now I have to wrestle with figuring out how to flash a corrupted bios or reliably force it onto the secondary bios for repair purposes. Yay for dual bios, but boo for not having a physical switch.
M

I think it's just gigabyte's dual bios software bricking itself randomly.
It seems to be a rather common issue with gigabyte software dual bios boards.
C

MrDeaf said:
I think it's just gigabyte's dual bios software bricking itself randomly.
It seems to be a rather common issue with gigabyte software dual bios boards.
Click to expand...

Could be. I've got an old Model M/PS2 keyboard around that I'll drag out. Just want to get all my ducks in a row with having a fat32 usb drive with the latest bios before I mess with it too much more. It's not exactly clear what bios you're on at any given time and supposedly there's an automatic boot recovery feature, which might explain some of the intermittent.

Change the CMOS battery.
It powers the system clock and bios settings when the machine is powered down.
But when the battery is too low it can make strange things happen, especially during post or bios setup.
This would be my first suspect on an old motherboard.

MrDeaf said:
I think it's just gigabyte's dual bios software bricking itself randomly.
It seems to be a rather common issue with gigabyte software dual bios boards.
Click to expand...

Not just gigabyte, my ASrock board has had a similar issue where my bios got all of a sudden corrupted or something , but it flashed it to the other one automatically after it refused to work.
C

Nenu said:
Change the CMOS battery.
It powers the system clock and bios settings when the machine is powered down.
But when the battery is too low it can make strange things happen, especially during post or bios setup.
This would be my first suspect on an old motherboard.
Click to expand...

That was the first thing I did this morning. I didn't have a good 3 volt load-test on my cheap-o multimeter but it did have a 1.5 volt battery test. I put the 1.5 volt battery test to the cell (it can't deliver the current sufficient for that) and then switched to voltage right after. The old cell was around 3.08+ volts. I didn't do the same load-test with the new cell before installing, but did a no-load test and found the new cell was 3.32 volts.

The cell should be able to maintain 3V or higher when under load. (as you are aware)
Its possible the old cell wasnt doing that but I would have had fingers crossed it was ok at 3.08V.
The new one is fine.

In case your bios settings are corrupt do an overnight CMOS reset. A normal reset can leave some memory cells with previous data.
Unplug the motherboard from all power and remove the CMOS battery.
See how it fares tomorrow.

If this works it might not have been a problem with the battery, it could just as easily be a corruption by other means.
But its a good idea to run with a known good battery so you dont compound the potential problems.
C

On the plus side, the board finally triggered a full rewrite of the main bios from the backup bios. The backup bios was the launch/F2 version vs the final bios being 1 year later/F8. Fortunately, it seems to have stopped bootlooping the F2 bios (I haven't gone into windows yet), but it erased all my stored bios profiles and I wasn't able to get the q-flash utility to see the fat32 usb thumb drive.

I am now working on making it a bootable thumb drive instead of using the qflash tool. If I get this all sorted out and running again, I'll have to remember to overwrite the secondary bios with something a bit more recent.
C

Flashing the main bios with F8 has made it so the motherboard reliably posts again. Unfortunately, it has gone into a Win7 Startup Recovery cycle that I'll have to figure out now.

It seems like Startup Repair is repairing things and then has given errors like PROCESS1_INITIALIZATION_FAILED and PAGE_FAULT_IN_NONPAGED_AREA messages in BSOD messages. I'll have do to some more google searching to see if these are the same types of messages that occur when AHCI-mode gets reset (one problem I recall having with this p67 board years ago) or something else.

I do have 4 sticks of RAM in that have served me for years and seem to get to 99% on the Windows 7 memory diagnostic, but then when the diagnostic seemed like it was about to restart the computer it did a BSOD so it's not like I can say "it passed".

edit: I think the next step will just be take it down to 1 stick of RAM and made one of those ultimatebootcd toolkits on a thumb drive to run some hard disk diagnostics. Maybe dozens of short power cycles has zapped one of my drives. 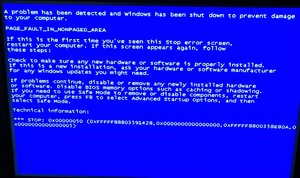 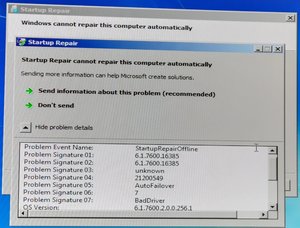 edit2: The fun part about having a windows 7 install that dates back to 2011 is when you try to find some sort of "install usb drive" you've made throughout the years for other PCs that still works. I could not.

Right now that windows 7 install is hosed, but after installing windows 10 on a different target partition, I can see the contents of all the drives just fine. I wasn't planning to do a Win10 install on this hardware and have currently skipped over activation keys while I mull options of forced Win10 vs a clean Win7 install vs trying to further recover my old Win7 install.
Last edited: Nov 7, 2018
S

FFS, of all the days to be messing around with trying to redeem old Windows keys to see what will work for Win 10 pro, I pick the day the activation servers go on the fritz.

and now clicking troubleshooting solved it. I'm not sure exactly which of two codes it used, but it's activated.
Last edited: Nov 8, 2018

I've had this issue with the P67 in my sig ever since I upgraded to 16GB of RAM in 2013. It always does a short boot cycle then shuts down before it hits the BIOS, after 2sec it boots up with no issues.

I read somewhere years ago, that it had to do with fully populating the DIMM's. I pulled the extra 2 sticks to confirm and it solved the issue. But fuck that I need/want 16GB of RAM.

CAD4466HK said:
I've had this issue with the P67 in my sig ever since I upgraded to 16GB of RAM in 2013. It always does a short boot cycle then shuts down before it hits the BIOS, after 2sec it boots up with no issues.

I read somewhere years ago, that it had to do with fully populating the DIMM's. I pulled the extra 2 sticks to confirm and it solved the issue. But fuck that I need/want 16GB of RAM.
Click to expand...

It turned out for whatever reason, one of the DIMMS was just not willing to play ball.

This model of motherboard has had a known reboot-twice behavior since it was released.
L

I remember having a hell of a time with p67 at launch. I first bought the board you have and it would boot cycle like that constantly. I took it back and went with Asus. Still did it sometimes but I think it was fixed down the road.

Odd though that yours would do it now after all these years.
C

Sorry for the lack of follow-up, but even after a new bios flash and rebuilding with a new OS the behavior was something I kept ignoring for months but eventually got so bad that the computer wasn't starting around June/July. Then I swapped PSUs and the problem went away. The EVGA 850W GS PSU thankfully had a long warranty (and people having a problem with the GS like this wasn't impossible to find google hits on). EVGA offered to RMA with a G+ and then a G3 when I suggested I wanted the "Eco" feature retained even with the RMA.
You must log in or register to reply here.
Share:
Reddit Pinterest Tumblr WhatsApp Email Share Link
Top