The components have already been shipped, and now I must simply wait for the glorious day that they arrive.

Hours upon hours of searching has yielded me the Jetway 663AS Ultra Motherboard. A Socket 462 aka Socket A motherboard equipped with the VT82C686B chipset. Yes, the 686B, not the older 686A chip. This means one thing: Barton. I now have access to the ultimate class of Athlon XP CPUs.

Of course this is normally easy, because loads of motherboards have the 686B chipset.

But the 663AS Ultra has one other little feature that takes it beyond the normal confines of this mundane reality: It has an ISA slot.

Upon a hill there is a knight in shining armor, ready to go to battle. Is he holding a sword? No. A longbow? No. A lance? No.
He is holding a semi-automatic machine gun, and that's just bad-ass, and that's exactly the feeling I get from such an advanced motherboard with such an old slot. But it's what I need for that sweet DOS midi music.

The ISA soundcard I found is an old Labway with the fabled ES1869F chip. This ES1869F is apparently pretty darn compatible, with nice sound, including some more advanced features like possessing an IDE port for a CD-ROM drive, and even a wavetable header for a daughterboard. Nifty.

Equipped to that wondrous 663AS Ultra motherboard will be the Athlon XP 2900+. Why 2900? Because it's actually newer than the 3200+ series. I took a look at the stepping codes, and it seems to be the same chip, only a higher stepping code. The 3200+ is AQXEA but the 2900+ is AQYHA. Well, those letters are further into the alphabet, right?

It's also released in 2004, rather than 2003 as the 3200+ is. But because of its lower designation as 2900+, the price on a certain auction website was considerably cheaper. Jackpot.

The ISA slot was a necessary feature. I found about 3 motherboards with both ISA and the 686B chip, and one was garbage, the other was expensive garbage. Now my computer is ready for DOS. Sweet.

Of course there must be a GPU too. The GeForce FX 5600 Ultra is using the NV31, which is apparently more compatible than its slightly more powerful NV36 FX cards. Something about shadows not working in Splinter Cell on newer FX cards. So again, because of the lower FX number, 5600 instead of a 5700 or 5800, I got it for much cheaper, yet due to the compatibility aspects I'm taking into account, it's actually better for me. Perfect.

But what about disk drives? Of course I'm planning to use DOS and Windows 98, so that gives me some troubles when it comes to disk compatibility. DOS has a disk size limit of 8 GB and Win98 has a disk size limit of 128 GB. Give or take. My solution was simple: Use a 120 GB SSD with a SATA to IDE adapter for Win98, to give me that deliciously sublime speed and low latency, and for DOS? Heh. I went to the extreme when it came to that. DOM. Disk-On-Module. A little gadget that fits directly into the 40 pin motherboard port for an IDE cable, so I have a sleek, sexy, and low latency drive that's 4 GB. 2GB for DOS and its utilities, and 2GB for the games. Bingo.

The only solution that might be better could be a CompactFlash card and adapter. But that's money I'm just not interested in spending yet. I'm a geek, but not necessarily wealthy. Someday though.

What about the RAM? Just some cheap 64MB modules. I already have a 128MB stick, but truth be told, I needed the RAM in smaller sizes so that I can pull them out for smooth DOS compatibility. This old PC133 RAM is cheap, so I'll just get more if I need it. For now, 64MBx3 modules is good enough for just about anything, even classics like System Shock and Deus Ex. Sweet.

The PSU is the cheapest box from a reputable brand I could find. 430W thing from Thermaltake. Ugh. I had a bad feeling about buying a used PSU, but I still feel a bit uneasy. I hope it has more than just 12v rail support. I won't know until I try it. It can't be helped.

The monitor is the highest end 1024x768 LCD I could fine. 1505FP by Dell. Well, it turns out CRTs are both expensive and insanely rare these days, so I'm very sadly out of luck there. I also hear, "CRT nerds know the best models and snap them up the second they appear on those auction websites or used hardware stores." So I guess I did the best I could, especially considering my prime objective:

I want to build the most sublime and insane case. Some sort of old style terminal, but made of a dark maple wood frame, and surrounded by transparent acrylic panels. The LCD sits on top of the motherboard chamber, and the whole thing stands upon extendable legs, so you can use it even while standing. Pure madness, but absolutely glorious.

I've attached a roughly drawn concept art of this idea. Green is LCD, violet is storage chamber or CRT upgrade room, yellow is the keyboard, blue is the pop-out mouse/joystick tray, white represents the extendable legs, and red is the motherboard chamber. Beautiful, right?

If you have any advice, ideas, or comments on this build, let me know. 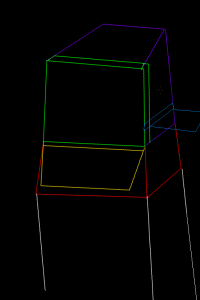 There's been an influx of 1080p 15 inch portable monitors as-of late. You can power that over from DVI to HDMI converter.

Why compromise on that crappy old LCD?

Aegir said:
He is holding a semi-automatic machine gun, and that's just bad-ass,
Click to expand...

Also, I don't know how far back of DOS games you'll be playing, but a Athlon XP isn't optimal for super old games that require downclocking for XT through 286/386/486 compatibility. If those games are required to be playable, you're better off with a Pentium MMX or AMD K6 so you can disable the cache and use SETMUL to downclock to 8088/XT speeds.

For sound compatibility, you can run multiple sound cards -- and old one in the ISA slot for DOS (disabled in Windows) and a more modern one supporting EAX or A3D in Windows. For DOS sound, the Sound Blaster Pro 2 is recommended, but the ESS Audiodrive with a Dreamblaster Wavetable would also work well for Soundblaster compatibility and MIDI. (or you could hook up a Roland MT-32 / Soundcanvas to the game port of a MPU-401 enabled joystick port) You'll mainly want to look for a Sound Blaster card with OPL3 and/or something that doesn't suffer from the hanging note bug. Other good choices for sound in DOS are the Aztech line of cards that support SB Pro compatibility, Covox, and Disney sound - they're cheap and often overlooked by collectors. For Windows sound, an Audigy 2 ZS or Aureal Vortex 2 would be optimal, with the Audigy 2 ZS being dirt cheap.

For graphics, if you have the money, consider picking up a Voodoo card for Glide support. A Voodoo 2 12MB can be picked up for under $100 if you look hard and set search alerts, and it runs in a PCI slot along side just about any other graphics card. You can also run 2 Voodoo 2's in SLI for 1024x768. A late DOS and early WIndows 95/98 gaming system without a Voodoo card is really missing out on the peak of the graphics accelerator era. 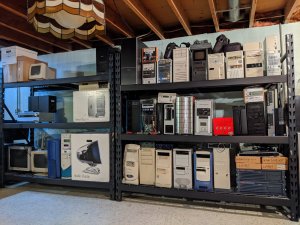 You might have trouble with the PSU. No 12v plug on the board means all the power is being pulled from the 5v and 3.3v lines. Newer PSU's are very weak there since modern hardware draws from 12v.

thebufenator said:
You might have trouble with the PSU. No 12v plug on the board means all the power is being pulled from the 5v and 3.3v lines. Newer PSU's are very weak there since modern hardware draws from 12v.
Click to expand...

A modern Seasonic mid/high end power supply will be sufficient, but will also be overkill and costly. A better option is getting something like an Antec Truepower and recapping it.

Or a slightly later nForce 2 board that has a P4 12VDC connector on the motherboard. But I don't believe any of those boards carry ISA slots.
You must log in or register to reply here.
Share:
Reddit Pinterest Tumblr WhatsApp Email Share Link
Top