I usually 3d print with my Prusa i3 MK2.5 in ABS. I prototyped a part and found it to be useful, but needed it to be more durable. It's a small part that bolts into the plow attachment of my riding mower but on the back near where it clips into the normal riding mower tow point. Basically with the plow, nothing could be towed. With this there is a tow point available for use.

In ABS (0.35 mm layer FAST profile but with 100% infill, 0.4 mm nozzle) at 0.188" thickness it worked fine for the lawn trailer. At about 0.35" it was usable with a carabiner and rope for pulling stuff if I slowly eased into the load, but that only worked for things smaller than the riding mower because of poor traction. The 3d printed part only needed to be thickened at the end with the pin - I reused the carriage bolts so one side had to stay at 0.188". I broke it a few times: 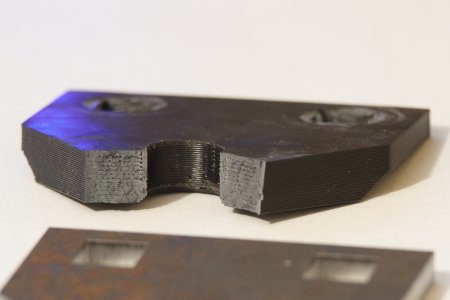 I haven't looked much into the small gaps between infill and perimeter with this profile. That might be something I can try to improve if I keep the same materials and use this profile with high infill more...but in this case ABS wasn't enough for the part.

I exported a DXF of the outline and tried the interactive quote tools for two online laser cutting services to see prices on material and thickness combinations. There were some differences in pricing structure; in my case one of the services had material setup costs that combined with shipping didn't work out for this project. The other had higher parts costs but no separate line items for setup or shipping - I ended up under $35 shipped to get 7 parts in 0.187" thick AR500. The part fits on the riding mower and took enough paint to probably outlive the rest of the sheet metal. 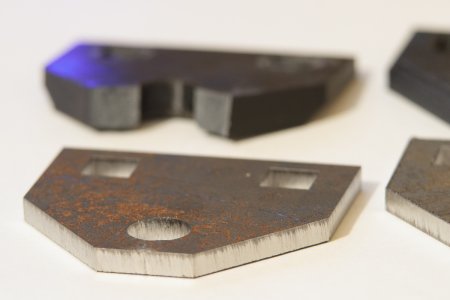 Anyways I just wanted to share this quick project with nearly solid infill 3d print prototypes and use of online quote tools to understand pricing for a couple of laser cutting metal vendors, and general pricing of parts that I eventually ordered.
You must log in or register to reply here.
Share:
Reddit Pinterest Tumblr WhatsApp Email Share Link
Top