About 4 months ago I started getting some screen flicker, primarily when playing games and watching videos. Decided to just deal with it and keep going, but eventually the whole computer started freezing and crashing, sometimes giving the error:

Did some googling, found people recommending updating BIOS and a clean driver/windows install. Well my PC's BIOS hasn't had an update in about 3 years and I can't even find the page on Gateway's site. Tried a clean install of the videocard drivers, no luck. Decided this meant my videocard was dying so I replaced it.

This did not fix it, and in fact made the computer angry. My primary Windows install flat out died, had to wipe the drive and only got a few things off of it.

New install has been working fine for a few weeks but earlier tonight I got the "THREAD STUCK IN DEVICE DRIVER" crash again. Windows gave me a minidump report (visible here: http://www.filedropper.com/021716-15468-01) but I have no idea how to open it.

I am just at a complete loss here, I have no idea what is causing this problem or how to fix it. I intend to replace this machine entirely in 6 months or so but it's just not a possibility right now. Is there anything I can do about this? Happy to provide more information, just not sure what to give.

Any help would be greatly appreciated.

Are you using the stock Gateway PSU?
Do the issues still occur when you're just using the onboard video or significantly lower-end car?
M

If you are using the stock power supply, you can almost count on it being the culprit.
K

Dangman said:
Are you using the stock Gateway PSU?
Do the issues still occur when you're just using the onboard video or significantly lower-end car?
Click to expand...

mnewxcv said:
If you are using the stock power supply, you can almost count on it being the culprit.
Click to expand...

Yes, I'm still on the stock PSU. Can't believe it hadn't occurred to me that might be the problem. I haven't tried with a lower-end card or the onboard video. I don't have another card available to try and the onboard is VGA only and I don't have a VGA cable.

I'll start my new build a little early and see if a new PSU fits in the case. Probably not, but... oh well.

Replaced my PSU and things have significantly improved. Had a device driver crash last night, but no OS level crashes or reboots, so hoping it was just a random occurrence. Thanks for the advice!
K

Happening again and more often now. The crashes alternate between "thread stuck in device driver", "video tdr failure", and just no error screen at all. Replaced the stock 4x2GB with a single 8GB stick last week to see if that was the problem.

Thinking I just have to finish the job and replace the motherboard at this point (and with that the CPU and RAM).

first, I don't think anyone asked and I don't see it mentioned but WHERE are you getting these crashes? at desktop in game watching video? could help narrow it down...
what pus did you put into it? good brand, more than 500w?
check your cmos battery make sure its 3.2v. ive seen dying batteries cause all sorts of weird shit!
even though its probably newer than the bad cap era double check your board for bad caps.
are you OCing the card at all, even a factory OC? what are you video temps like?
hope something helps, good luck!
K

Sorry, those are good questions!

Crashes are happening at all different times. While gaming, while watching a single youtube video, with absolutely nothing going on, when waking from sleep. No apparent rhyme or reason.

The PSU is an EVGA Supernova Gold Certified 650Watt

No overclocking at all, everything is stock.

Have not been keeping an eye on the temps, I'll grab a small app/widget and see if there's any correlation, and I'll go out and grab a new CMOS battery to see if that helps.

I don't wish to tempt the good lord Murphy, but it seems like replacing the CMOS battery fixed it. $5 instead of $350, job damn well done sir.
K

And that's why you don't tempt the good lord Murphy!

Your fix was the cheapest and lasted the longest, but alas, the symptoms have returned.
F

Do you have another computer to test the GPU?
K

flatty said:
Do you have another computer to test the GPU?
Click to expand...

I do not. Also, the issue persisted after I replaced the card. It's certainly possible both cards have the same issue but I think it's fairly unlikely.
F

Konrad said:
I do not. Also, the issue persisted after I replaced the card. It's certainly possible both cards have the same issue but I think it's fairly unlikely.
Click to expand...

This is true, but GPU was the only common component in all setups. Try also replace SATA cables, reseat PSU connectors.

shitty that the prob came back! you should test the new battery to make sure that it hasn't been drained some how. ive have seen board that are failing suck batteries dry in a few days.
other than that id check over the mobo very carefully and thoroughly looking for any bad caps or odd colored areas and blow out all the slots with compressed air. pull the video card and check these in particular: 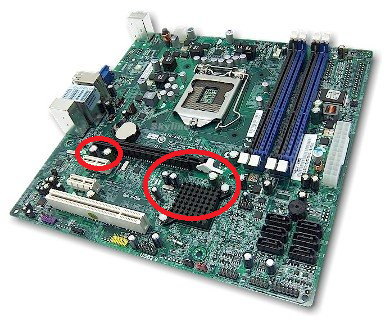