This Robot Does All the Cooking For You

it will be interesting to see how one robot chef cooks compares to other robot chefs. One will make better food and those will then be in demand and you can charge stupid high prices for them on ebay same as we do now for GPU cards
I

cybereality said:
It's called Huel. I linked it above. It's a nutritionally complete meal in powder form.

You just mix with water, I add Splenda and it sort of tastes like a milkshake. You could use it to lose weight, or if you just want to save time and not cook.
Click to expand...

oh doesnt mrwhosboss have sponsorships with them?
I

Axman said:
While everyone has their likes and dislikes, this is not true. Many companies and individuals have figured out what flavors and techniques make people come back for more, and the reason why they're successful is because they're taking advantage of biology. We're hard-wired to like certain things, and its all rooted in survival. And companies spend billions on tweaking what works in order to make people try it all over again.

I've yet to find a bag of chips I won't eat, even if I don't really like them.

There are some conditions that make us reject certain foods, textures, and flavors, and usually they're tied with foods that make us sick. Some of that's innate, some of that's experience. But those are edge cases. The stuff that works, we all like, because we're built to like them.

He's a chef first. Started out in scullery, he's as legit as they come.
Click to expand...

well the reason you cant stop eating chips is beacause they were made to make humans like them that still doenst mean Gordon Ramsay is the best chef in the world. you as white person could like "white people food" but lets say a Korean ate his food, he might not like it. I dont understand why you think hes suddenly the best chef in the world just because the tv told you so. talk about believing what you see online..... no he isnt as legit as they come if he became famous from drama shows.
H

How dare you mess up all the vitamins / minerals and taste of that nice meat with rice using doomer drinks next to it? IDK, maybe it goes well like how rakı goes good with fish... but I suggest you take that alone. At least that way, you'd benefit more from that meal. 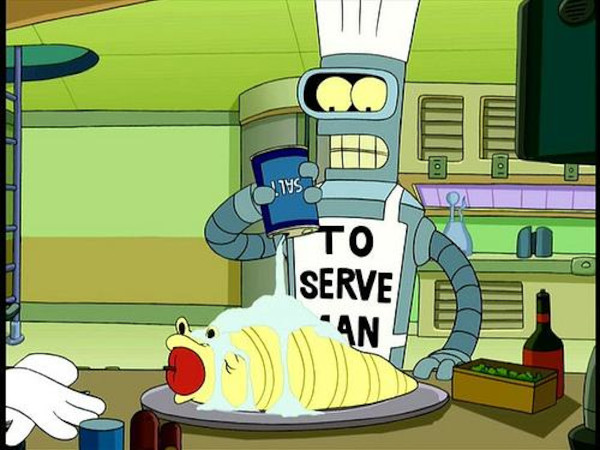 
idk what to say said:
that still doenst mean Gordon Ramsay is the best chef in the world. you as white person could like "white people food" but lets say a Korean ate his food, he might not like it.
Click to expand...

Just like there is no 'greatest guitarist' in the world, there is no greatest chef. There are hundreds of great ones, and tens of thousands of really good ones in the world; I was once told that a good chef can make practically anything taste good, and that indeed has been my experience. Which one makes foods that you particularly like a tiny bit better than others, is up to personal taste. Just like some people like McDonald's burgers better than White Castle's. Same ingredients, different preparation, so they taste just a little bit different. And, sometimes you want something made one way on one day, and the next, you want it different. Like New York style pizza vs Chicago deep dish. You will be able to have the robot make either, depending on what you want that day. With any variation you want, too. This is the Jetson's Rosie the robot homemaker.

Now, with a chef robot, it will be programmable to make each particular type of food, the way you prefer it. Like your spaghetti al dente? Or more limp with a saltier sauce? It will make it that way; just choose a different program to run.

Until we get to Star Trek's food synthesizers, the robot will be the next option. I don't see myself living long enough to see this happen for middle income people in the home, but at work places or restaurants? Sure. Arrive to the workplace cafeteria, and your meal will be waiting for you, perhaps done being prepared seconds before you walk through the door. The commercial ones will be more like the robotic automobile manufacturing ones; each one on the assembly line doing a particular thing, and then WHOOSH! Off to the next robot for the next step. And it will all be done so quickly, the food made at the beginning of the assembly line won't have time to get cold. It will be the end of the human kitchen staffs. This is all only a matter of time, before it happens.

That said, many will worry about what will happen to all the unemployed idiot humans who are so dumb, they can't be bothered to, or are just unable to learn more complicated jobs; well, we're solving that right now, as covid19 kills off many of the stupid people, and they don't even realize what's happening to them. More diseases could remove even more of the world's idiots, until we're left with a planet with a higher intelligence population. But that's for another thread.

For some reason, I think it will still be cheaper to hire a person and pay them minimum wage than whatever the hell this robot is going to cost (and then also pay for support and maintenance, etc.).

Kek, good luck getting a cook to show up for that gig at that rate. Depending on the latitude and longitude, even dishies are getting paid extra to show up, and dishies are legally allowed to work drunk, high, and hungover all at the same time.
I

Axman said:
Kek, good luck getting a cook to show up for that gig at that rate. Depending on the latitude and longitude, even dishies are getting paid extra to show up, and dishies are legally allowed to work drunk, high, and hungover all at the same time.
Click to expand...

chefs are realy underpaid if you dont know. its a teriable job in terms of money

idk what to say said:
chefs are realy underpaid if you dont know. its a teriable job in terms of money
Click to expand...

The stereotype of the long-suffering, underpaid kitchen worker died this year.

It actually died last year, but no one noticed, for reasons we may never understand, and have no records of.

And chefs are always underpaid in their minds. However, the people that work now, are making money. The industry is paying in new and different ways, and anyone who thinks they can compete at a few bucks above minimum wage are getting wrecked.

Know that a decent bartender, in a decent town, can make over 50 grand a year. I asked my bartender when she bought her first home, if she didn't mind me asking, what she took home that year. It was $70,000, after taxes. She and her husband paid their down payment in cash. And a bunch more in cash.

And that was before all of this. People in the industry can make, it's just that people in the industry also have habits. Blah blah front of the house back of the house. Doesn't matter, get your worth. Even if it means losing money to learn to make a restaurant go, and marry a batshit crazy hostess* who helps you start a restaurant you do earn from.

There's a ton of struggle. Shitty jobs that pay shitty wages. Finding the right place to call home, while building the skills that mean the difference between being good and being the people that the industry hates.

But right now, all you have to do is show up, and not be a complete dickhead. Oh, the fallout will be spectacular, with orders of magnitude more assholes complaining about how hard it is to work in the industry, and how they got short-shrifted the entire time. That's bullshit. Right now you can be a complete reject and make great money making bad food served late and cold.

And you'll still earn above your pay grade. At least for now.

*Anyone who marries a hostess, keep in mind, I'm talking old-school front of the house manager, not ditzy chick trying to OMG seat people at tables. Hostess in the sous sense. Someone capable and ready for the next gig of a lifetime.
S

Axman said:
The stereotype of the long-suffering, underpaid kitchen worker died this year.
Click to expand...

I think it's because a bunch of cooks think they're chefs. The guys working in the kitchen at places like Chilis, TGIFridays, etc, they're cooks, but you ask them they're chefs!

sfsuphysics said:
I think it's because a bunch of cooks think they're chefs. The guys working in the kitchen at places like Chilis, TGIFridays, etc, they're cooks, but you ask them they're chefs!
Click to expand...

Not anymore they're not, places like Chili's run the food through a conveyor, its already pre prepared. People are paying $10+ for a glorified TV dinner. I found this out after going to a new Chili's location, ordered my food, it came out in under 5min, the plate was scorching hot. Haven't eaten anywhere like that since.
You must log in or register to reply here.
Share:
Reddit Pinterest Tumblr WhatsApp Email Share Link
Top