I installed again the AMD 92mm fan, and remove the delta fan because the PSU feels cold even with maximum energy load
All the fresh air coming from the 92mm enter by the grill of the PSU and keep the components cold.
If you are tired of the noise from the Flex ATX PSU, you can use a Noctua A4X20mm and plug it on the Motherboard using the low noise adapter, add a 92mm just below the DVD Caddy (the fan need to be air presure optimized) and the dBa on idle are virtually silent.
Im using a IXtrema 40mm fan to push hot air from the PSU , this fan really sucks at max rpm (the brand claims max dbA are 14db, but they lie, the max dba with a cellphone app shows around 45dba @ 12 volts, too noisy)
With 7 volts adapter i got 15dba, barely spins and dont move a lot of air, but iits ok to keep low temps from the PSU.
In summary, now the noisy part its the GPU when i run games, but its ok, soon im gonna replace it.
Its possible build a decent gaming machine on this case and keep it silent with decent temps.
I Share a pic of my desktop, i dont like RGB but found a cheap mechanical keyboard and i bought it
(Every piece of my PC dont include lights ,except the Jostick RF receiver)

Ok i think finally found the best noise/performance/airflow setup for this case
To someone who try to reuse this little box on the future, without spending a lot of money trying to reach to the same goal:
If you find a way to mod the HP S3000 stock cooler to fit on Intel 1200/AM4 socket, with low TDP processor (45 watts, 65 watts without turbo boost)
Its the ideal cooler because the heat goes away from the back of the case horizontally
The stock AM4 /1200 cooler can handle the processor without problems
but fries the PSU 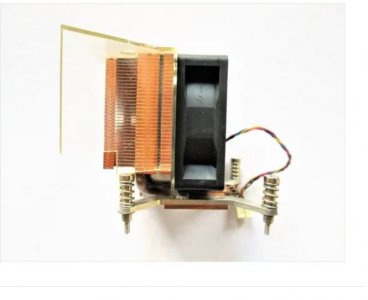 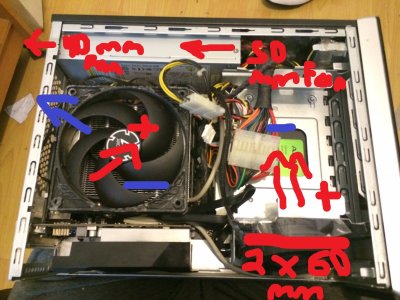 s:
I recommend put 2 fans to the PSU, 1 bringing cold air and other push it out hot air
Noctua 40X20mm to push hot air on 7 -9 volts are dead silent with good performance
Superred 50x25mm (the stock fan of my PSU) moves a lot of air with only 5 Volts.
Third : You can fit 2 x 60 mm fan on the bottom on the bays area, i set it pushing cold air
I took the recommendation to replace the 92mm to 2 x 60 mm fans
Set it to 2000rpm runs quiet and adds airflow to the bottom of the case
If you put a third party coolers to the processor, the hot air goes to the sides
If you swap the fan direction to exhaust, the CPU temps goes 5-7°C worse but the drives runs cooler (only 2 o 3 degrees)
The GPU temps are better too, but not by much (2 or 3 degrees)
Arctic fan its the best noise to performance fan, works great on both positions (intake,exhaust)
Noisebolcker Eloop are quieter, but only on intake mode.
Noctua P12 silent on intake, noisy on exhaust mode

More improvements (for modders):
Maybe in the future i try to do some improvements
The spot in the left picture feels warm playing games, making some holes to push the air to that area maybe reduces temps
On the right, i dont know why HP only make holes for the drive ara on the right side, with a line of holes on the bottom i think the GPU can handle better temps

My modded Adata SU650 died, replaced with a Crucial BX500 480GB (no modded)
NVMe drives without aluminum heatsink fits on the back of the motherboard
Just add a 2mm thermalpad to use the case as a heatsink 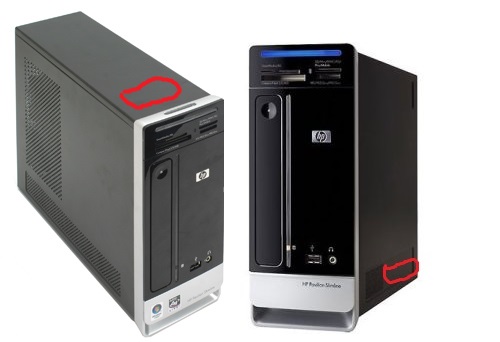