Seyumi said:
I think that's a unique 1-off situation or a very uninformed seller. I've seen brand new EVGA RTX 2080 Ti FTW3 Hybrids go for over $1000 recently. Used ones are going for $600~$700 for the past few weeks. How do I know? Because I've been watching all the FTW3 Hybrids on Ebay for weeks and just bought a 2nd one now for around $670 with some fierce bidding competition (has the original box/packaging/accessories, usually just the cards only go for the low $600 mark). I bought a 2nd one for SLI because I already know I probably won't get a Hybrid 3090 until the end of the year if I'm lucky and I just simply couldn't wait anymore. I'll upgrade to 1 or 2 RTX 3090's when I don't have to sit around and spam F5 all day.
Click to expand...

My sub-$500 alert gets triggered 2 or 3 times per day and I only scan for EVGA cards.

TaintedSquirrel said:
My sub-$500 alert gets triggered 2 or 3 times per day and I only scan for EVGA cards.

I could see that happening for a pretty basic EVGA 2080Ti. I'm assuming AIO's add a bit to the price and so does being one of the top models in the lineup such as the FTW3.

Seyumi said:
I could see that happening for a pretty basic EVGA 2080Ti. I'm assuming AIO's add a bit to the price and so does being one of the top models in the lineup such as the FTW3.
Click to expand...

If it makes you feel better I was told by reddit that kingpin seller was a scammer.
S

TaintedSquirrel said:
If it makes you feel better I was told by reddit that kingpin seller was a scammer.
Click to expand...

Lol I'm not surprised. Ebay is becoming the new Craigslist as of late. Been on the platform since 2002 with over 500 positive feedback. When I sell something, I explicitly say I won't ship international and will cancel bids for anyone with less than 5 feedback, but 90% of all my bids always meets those criteria. Such a headache.

I'm not watching that twit, you got to be kidding me he has the balls to post this now that we are this close to launch after the fire sales have already happened.
R

Mylex said:
I'm not watching that twit, you got to be kidding me he has the balls to post this now that we are this close to launch after the fire sales have already happened.
Click to expand...

He’s been saying that for weeks, though...

RazorWind said:
He’s been saying that for weeks, though...
Click to expand...

Is this a follow up video in which he urged people to wait on selling their cards? If not his motivation for just now making this video is suspect. If he felt it needed to be said he should have made it almost two weeks ago when the main damage was done. The toothpaste is already out the tube.
C

I'm increasingly glad I made the decision y'all helped me make - it's removed the stress/anxiety from trying to snag one on Thursday.
L

You won't see a price drop on 20 series cards until the stock of 30 series card has stabilized.
D

Mylex said:
You won't see a price drop on 20 series cards until the stock of 30 series card has stabilized.
Click to expand...

Agreed with Mylex , however people with money saving in their mind will sell their previous card to save from price drop when it already available widely.

I'm thinking that Nvidia trying to get their income sales hike this year due to current condition by publishing such drastic leap in their lineup. But with that in mind,that means, I believe, even now, Nvidia already able to create cards with 20.000 CUDA, they are just waiting the right time to launch it.

Btw, have this aggresive kind of new VGA launch by Nvidia happened previously? if it is, what happened to used card back then ?
Last edited: Sep 16, 2020
N

That was too painful to watch after 5min! Admitted he had a Reddit page and has no clue what is going on it. I guess putting his name on something means nothing to him, quality, truthfulness, pushing the users to improve . . . Then the touchy feel stuff about not feeling bad about your 2080Ti worth. . . What? A bunch of 8 year old's have 2080Ti's and they are crying over it? Who exactly was this video meant for? He actually has a large audience, is he effectively teaching and pushing their knowledge level above 3rd grade material? People mention click bait stuff, this is worst, patty cake making.
C

3070 and 2080 ti will likely be a tie based on what I'm seeing for the 3080 given the memory and bandwidth advantages the 2080 ti will have. Even power draw may end up being similar since that is one thing that has not improved with Ampere performance/watt. My guess is 2080 Ti prices for decent cards with good quiet coolers end up in $500-650 range for quite while depending on 307/80 availability.

Awesome find, if someone is in the market they need to be looking for these.

That many 20 series cards from one retailer is crazy. Make me even more positive they had trouble moving those.

Believe I may have seen some of that. Couple lots of 'new' blower style 2080 ti going for $299 each. No dice. Blinked and they were all sold.
K

There was a post about some retail company flooding eBay with new retail 20 series cards today. The hired a liquidator to put them up. It was price ranged $230-$500. Each model had there own price. I'll try for a second to find it but if this doesn't get updated search here or reddit. Duh it was a couple posts up. 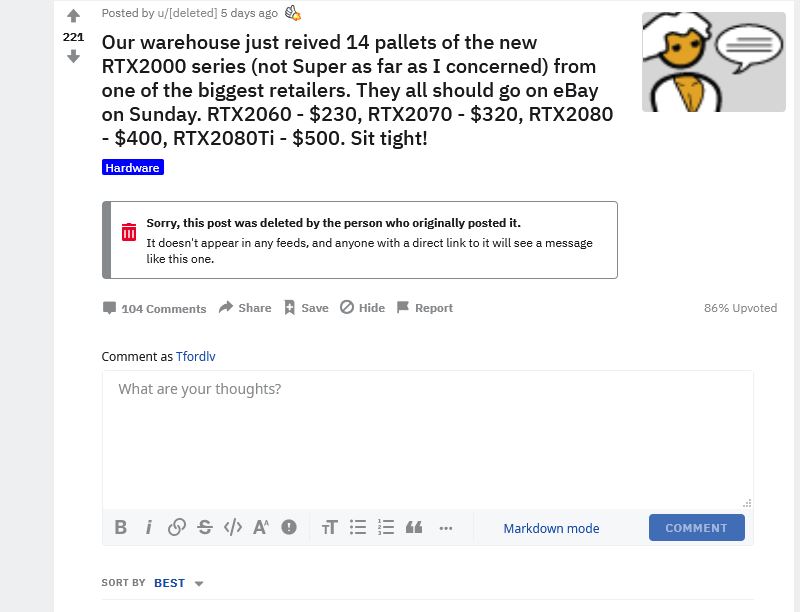