I figured since someone got the Workstation one going, I'd kick off the Rig one for the new year.

I give you my current magnum opus:

Cooler is an NZXT Kraken x61, rest of build is in my sig.
S

Nice setup Zion, I really like white and blue.

You should try lowering the iso on your camera to 150-250 and see if the pics come out better. Even most cell phones have a manual mode.

double post? i finished a mod a few minutes ago, can you guess it?

vmankills said:
double post? i finished a mod a few minutes ago, can you guess it?
Click to expand...

You should wrap your PSU too.

Very clean setup, I like the SSD mounting and carbon wrap, is it dbrand?
F

SHiZNiLTi said:
Very clean setup, I like the SSD mounting and carbon wrap, is it dbrand?
Click to expand...

With a little bit of heat you can get this stuff to conform to just about any shape. There's a ton of youtube videos on it.
W

I present to you a slightly modded case from an HP NetServer E60, circa 1998, stuffed with modern hardware that was either cheap or free.

(with guest appearances by my recently resurrected iPod Mini (sporting a 32GB SDHC card in an adapter) and a lovely figurine from the inner depths of somewhere in Akihabara.

Most of the parts are salvaged from computers that were scrapped from a friend's recycling business. I go over there sometimes and help him rip apart computers if the weather's good.
copper/aluminum/gold prices are pretty low now so he's making money in other ways, but I'll go over there if he has anything he needs identified and/or if I need parts-- I'll gladly trade a few hours of work for a part I need if he has it.
Coincidentally, the 8-port KVM switch on my desk for the three computers to my left is also a scrap save, and overkill for the job.

Future upgrades include a Hyper TX3 for future overclocking attempts, a better GPU of the Nvidia breed, combining all of my 2TB hard drives from my other box into this box
(specifically to replace the 500GB WD Blue and the 750GB Seagate), install the dual-head Intel PRO/1000 card from the other box (for more ports for VMs to use if need be) and probably a newer PSU?
The BFG is fine, but it's a bit older and in working condition, one can consider it a collector's item of sorts. I've had at least one person approach me about buying it off of me if I ever replace it, so I may go that route. Score!


For reference, here's an older pic of the other box, from April (still the same, sans the RAID card which did not work because nForce 4 sucks like an Electrolux vacuum cleaner):

a workhorse of sorts, but the components are starting to show their age. the CPUs alone are 10 years old a piece, as is the RAM as of last week according to the SPD data. the board is turning 10 soon, as well. it's been my main computer for the past 4 years, taking absolutely everything I've thrown at it and still continues to chug right along.
I don't remember how much I paid for some of the components inside which were not already free or on hand, but I do remember that the CPUs and board as a set were $35 on eBay when I got them. the RAM was another $30 at that time. Case is an In Win Mana145.


Total amount of money spent on the HP E60 Sleeper: $62
and yes, the Ultra 10 to the left there is still functioning and doing things. it's about 15 years old now.
S

@walwaka, so much sleeved cabling you never see! ::sadface::
F

Here is mine finished today:

I know I know... I used to have this rig in a carbide 540 and the cables showed a lot. I needed to move to something smaller and now you don't see them. I'll be working on that this week.
C

I'm trying to figure out how you guys are getting these PSU's sleeved... do they come that way or are you doing it yourselves, or do you purchase different cables after the fact?
F

I have not seen a PSU come pre-sleeved. Some guys will tear them apart, cut the wires to length and sleeve the entire wire. You can buy sleeved extensions for all pin combinations. If you have a modular PSU there are companies that make sleeved cables kits for those particular models.

There are a lot of way to get your sleeved cable look!
S

I have not seen a PSU come pre-sleeved. Some guys will tear them apart, cut the wires to length and sleeve the entire wire. You can buy sleeved extensions for all pin combinations. If you have a modular PSU there are companies that make sleeved cables kits for those particular models.

There are a lot of way to get your sleeved cable look!
Click to expand...

Corsair AX, HX and RM (and probably some others I'm discounting) all have individually sleeved cable options available. EVGA also has sleeved cables available for certain models, though not quite the selection of colors. Granted, all of this is at a premium, but for your less adventurous fellows, one worth paying.
F

spugm1r3 said:
Corsair AX, HX and RM (and probably some others I'm discounting) all have individually sleeved cable options available. EVGA also has sleeved cables available for certain models, though not quite the selection of colors. Granted, all of this is at a premium, but for your less adventurous fellows, one worth paying.
Click to expand...

My point was that you can't buy the PSU with just the sleeved cables. From what I have seen you can only buy them as an add on. Which means you now have two sets of cables, turning into additional cost when purchasing a PSU. I would love to see an a-la-cart option where you can pick out your cable colors at checkout!

I went with extensions but then you have to find more room to hide even more cable. Chances are a full modular PSU with custom or from the manufacturer sleeved cables is what I will do next time.

Some shots of SkyNet in my Sanctuary.

What do ya'll think of this beast gaming rig?

KazeoHin said:
Some shots of SkyNet in my Sanctuary.

Got a sweet deal on a Maingear Shift Case and Cooler so upgraded from a Corsiar 450D case to this guy over the weekend:

I just picked up a new case, so I figured I would post it in here. Phanteks Enthoo Pro M. Since I can't leave anything alone, I striped it down and painted the inside white. Also has to drill some holes to move the HDD cage backwards so that I could fit a 280 rad in the front while keeping the optical bay. I still need to put my Blue Ray drive in and get my RGB LEDs wired up. 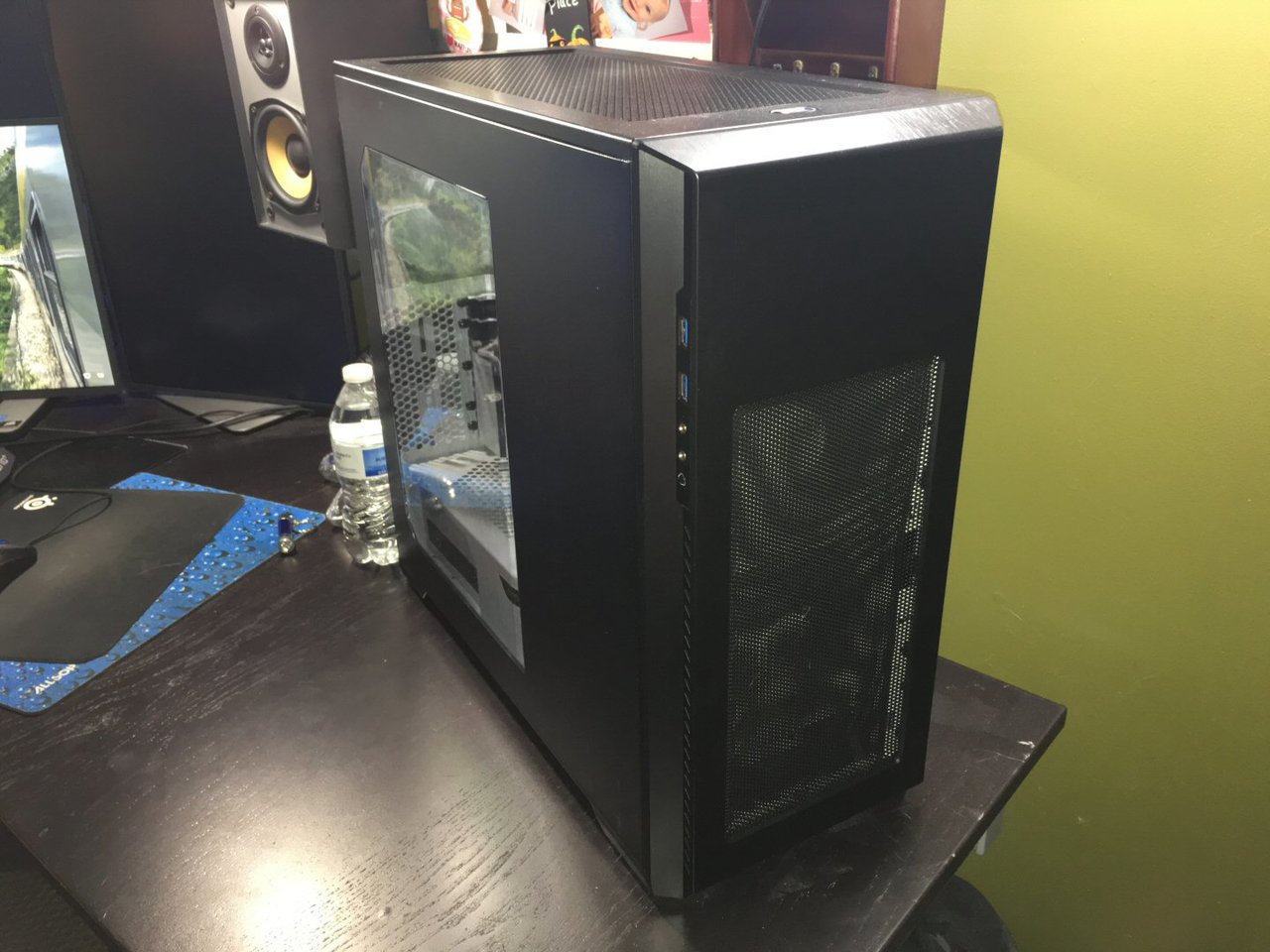 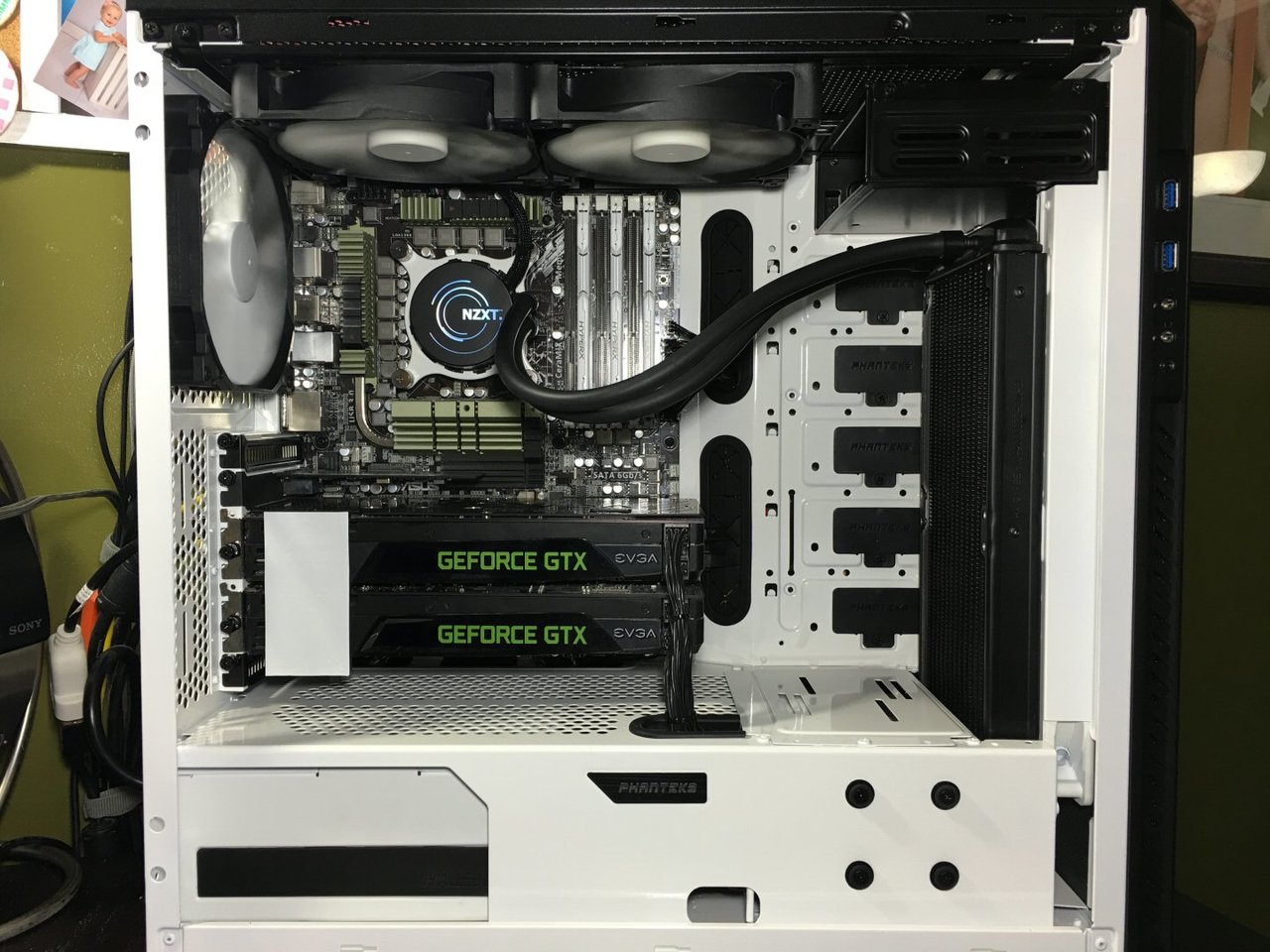 Pretty crappy pics I know (I blame the camera heh), did a slight refresh on our home server from 1155 to 1150 (i3 to Pentium). Got a better board with a full complement of SATA3 ports and a socket upgrade for free, not complaining. Had to reorganize some cables in my cramped Lian Li PC-A04 case with absolutely no place to hide cables - partly due to how I configured the hard drive cages for drive suspension and less obstruction to incoming air. All in all, the third rebuild for it! 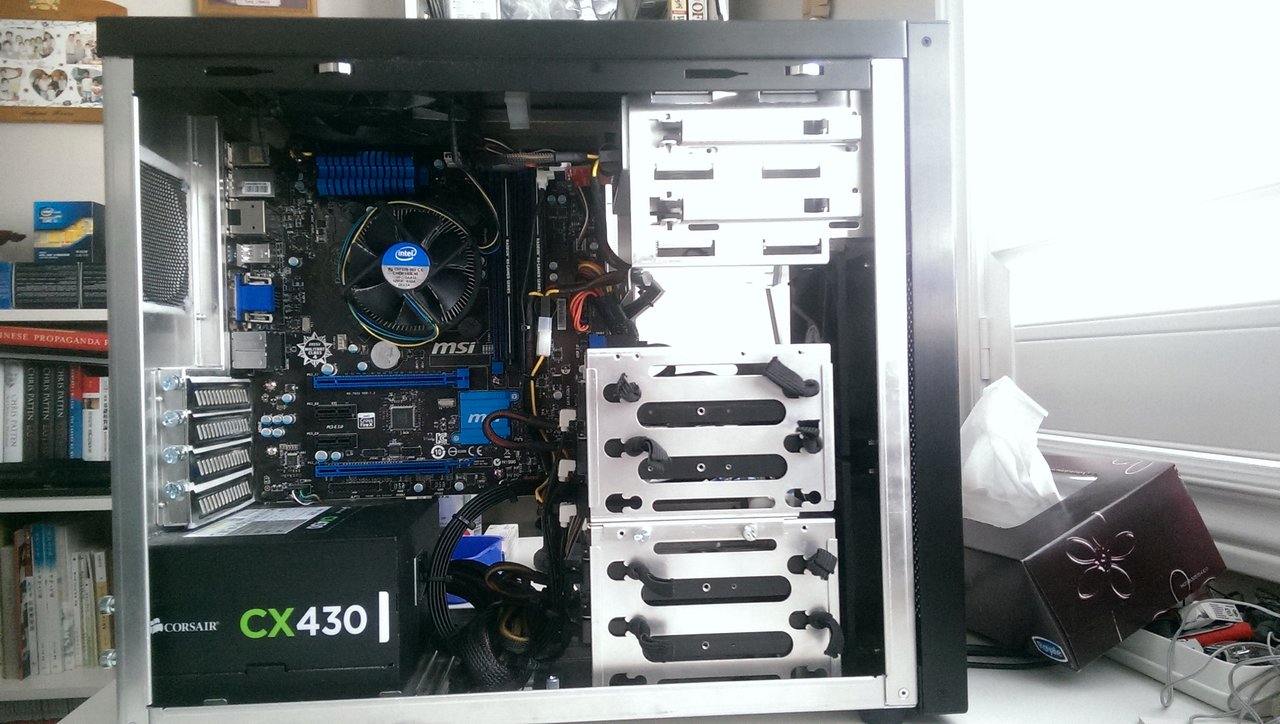 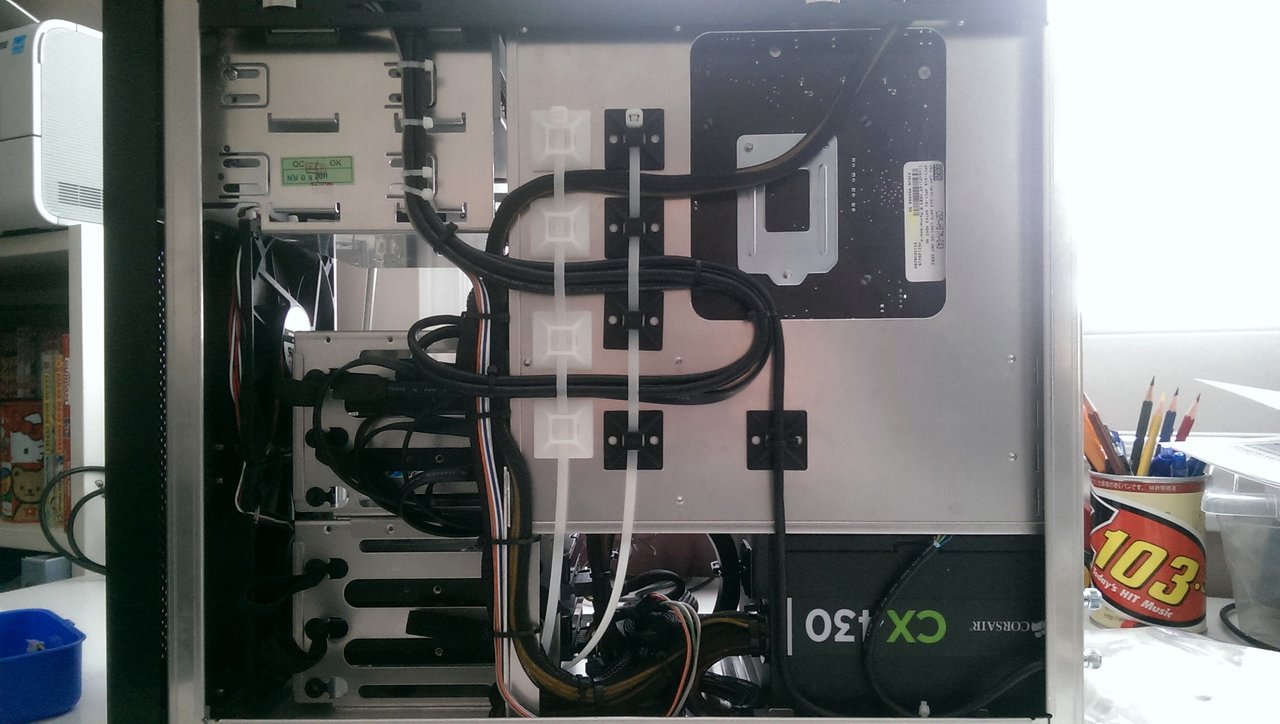 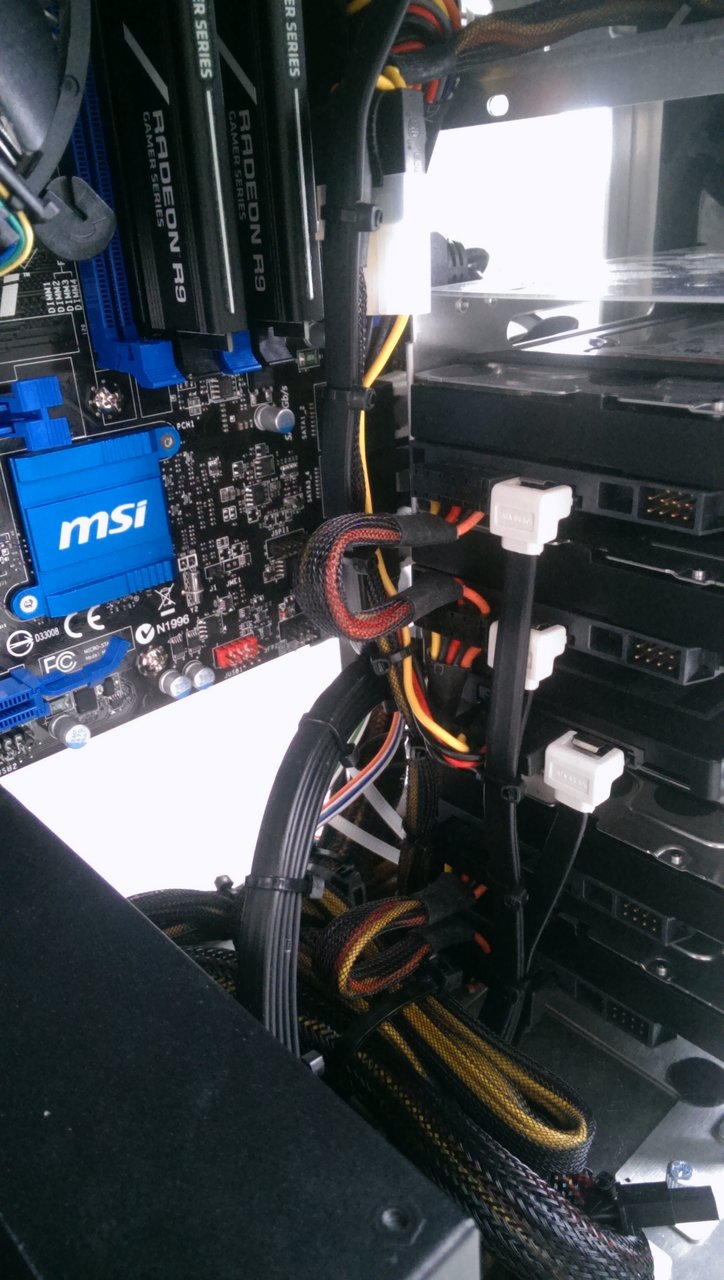 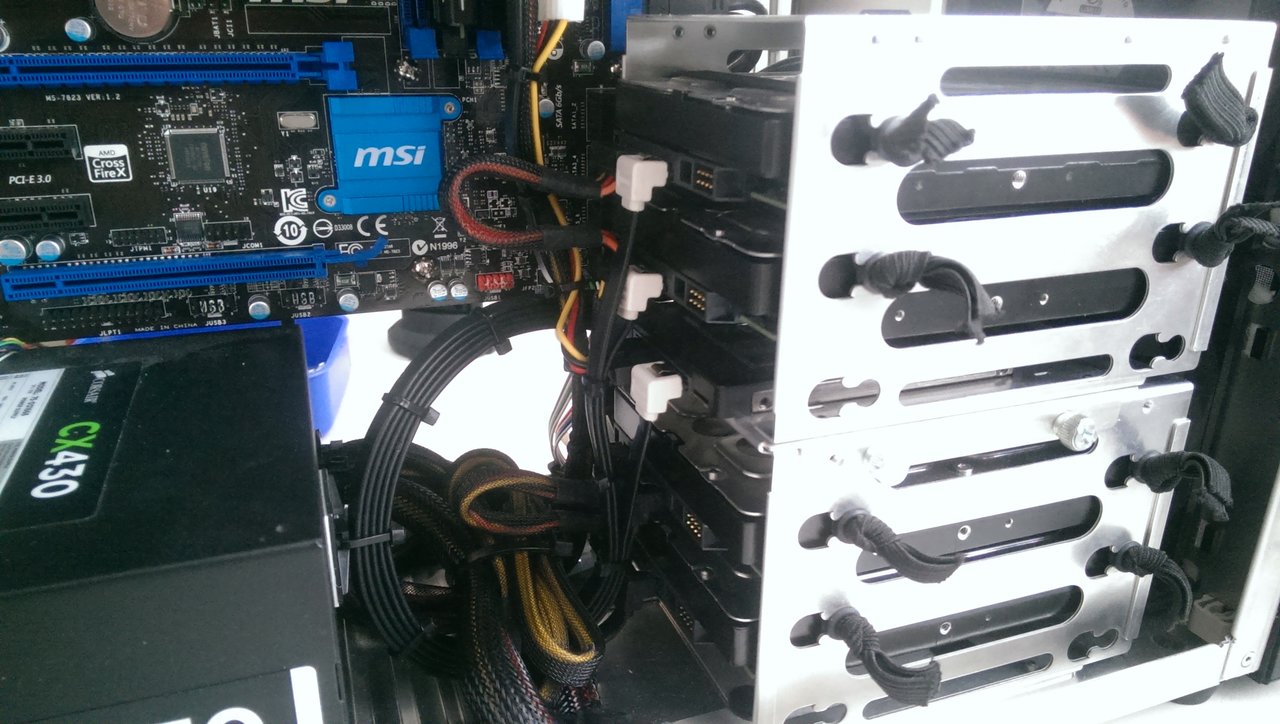 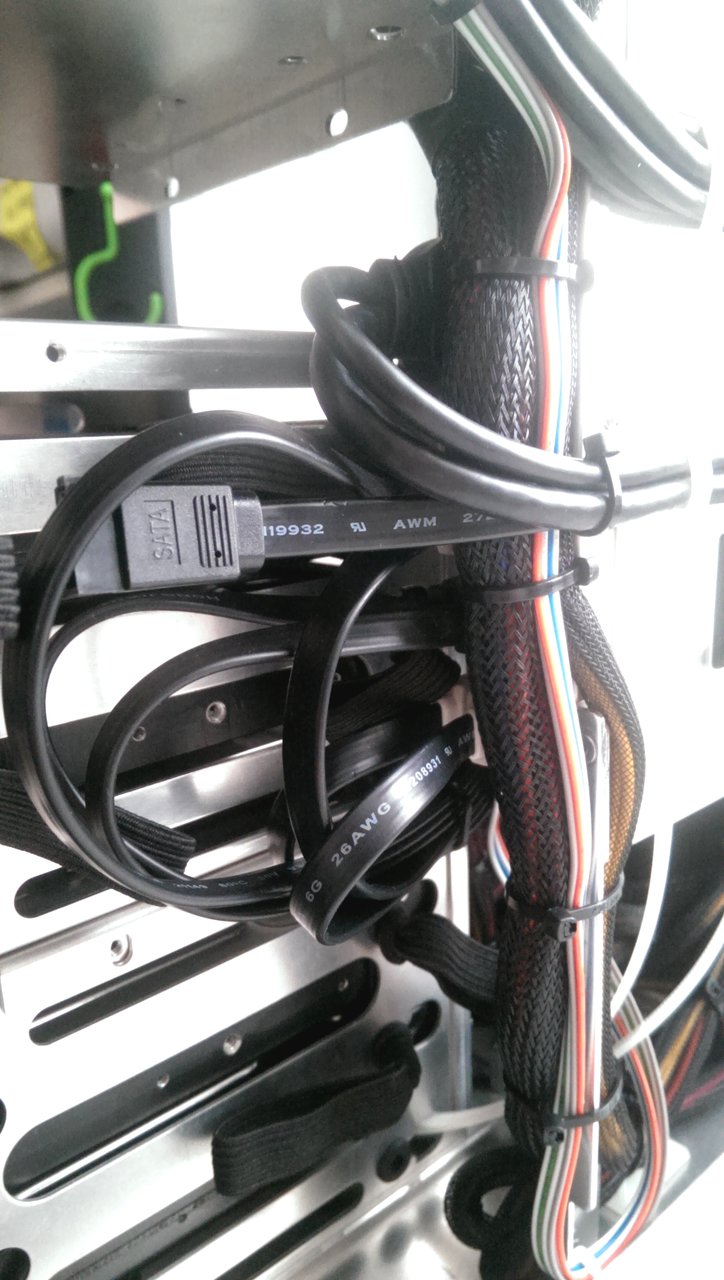 Here is mine! Been too long since I built a machine. Put it together over the holidays.

Also pretty excited that I took the time to wire the LEDs on the fans individually. It was always a pet peeve of mine that the brightness would change with the fan speed if they were voltage controlled. All of the fan LEDs are controlled by an Arduino that I hid under the drive cage. The fan LEDs can now be controlled independently of the fan motor. It also allows for effects. Videos below.


Toggling on and off


I wrote a small program that communicates with the Arduino over USB. This way there aren't any visible controls on the case.

My air cooling rig, mostly was using for gaming

Made a few changes to my system. New memory and video card. Still a few more things I want to do. 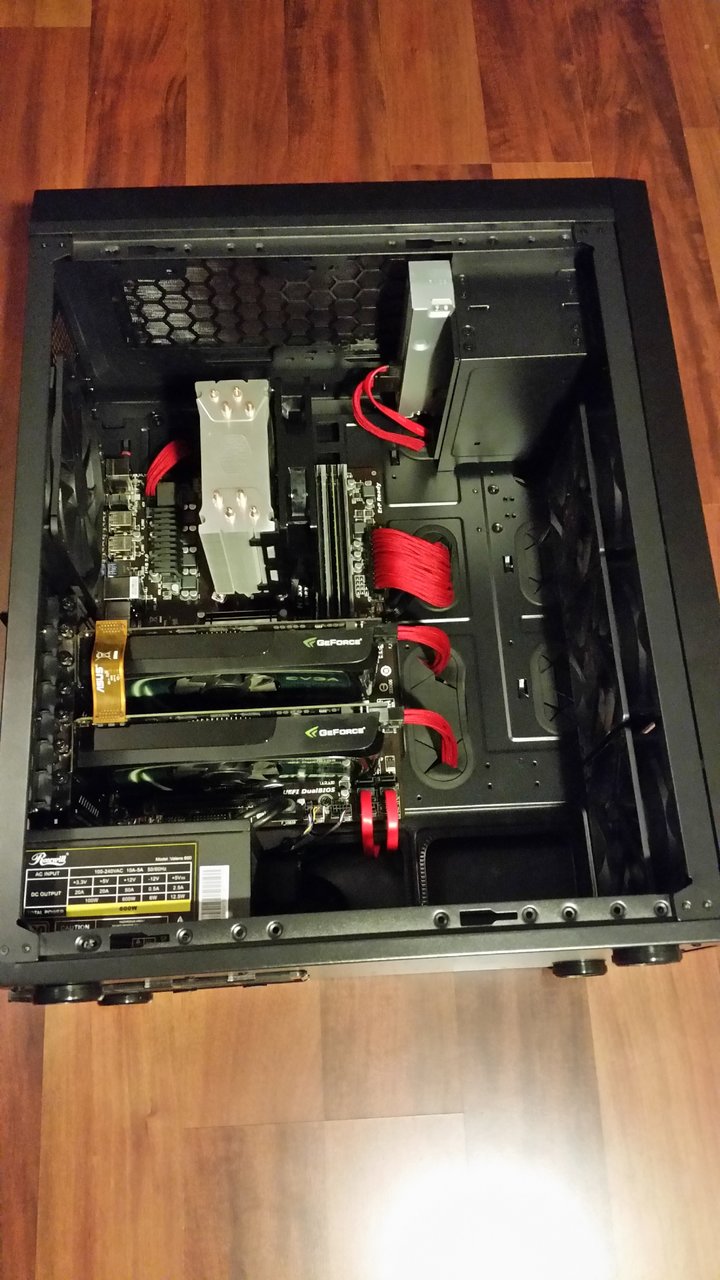 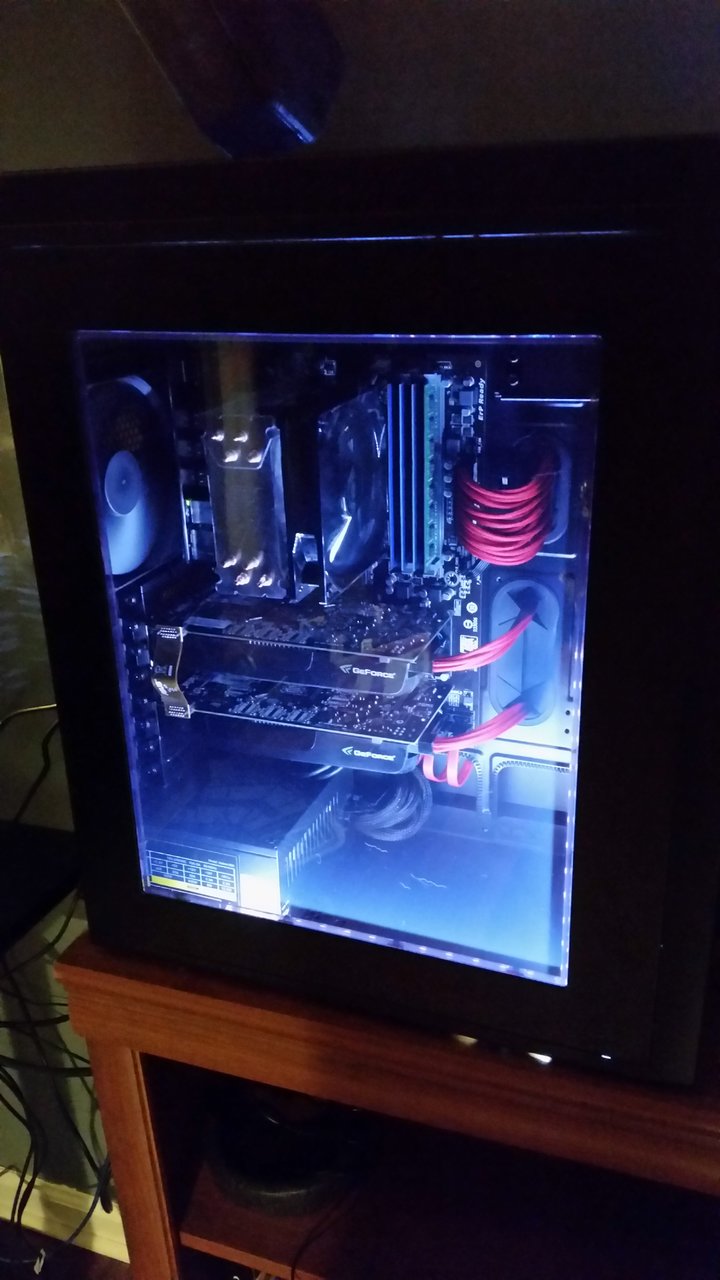 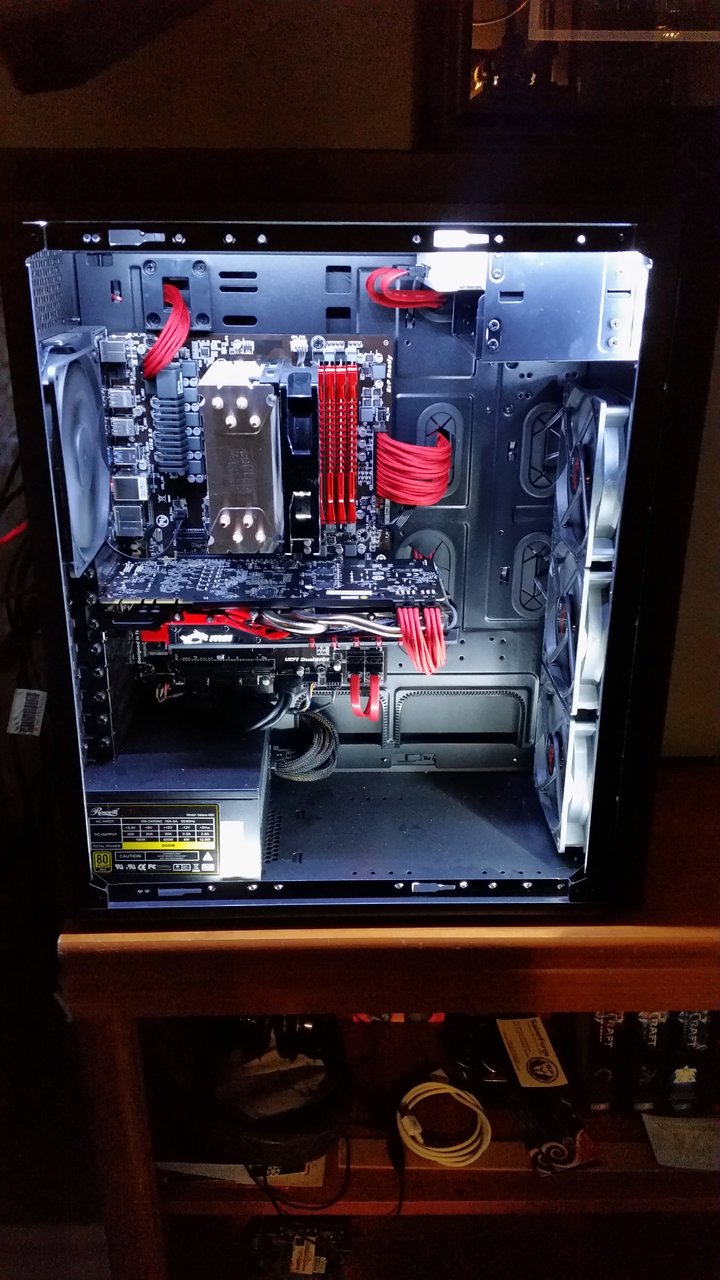 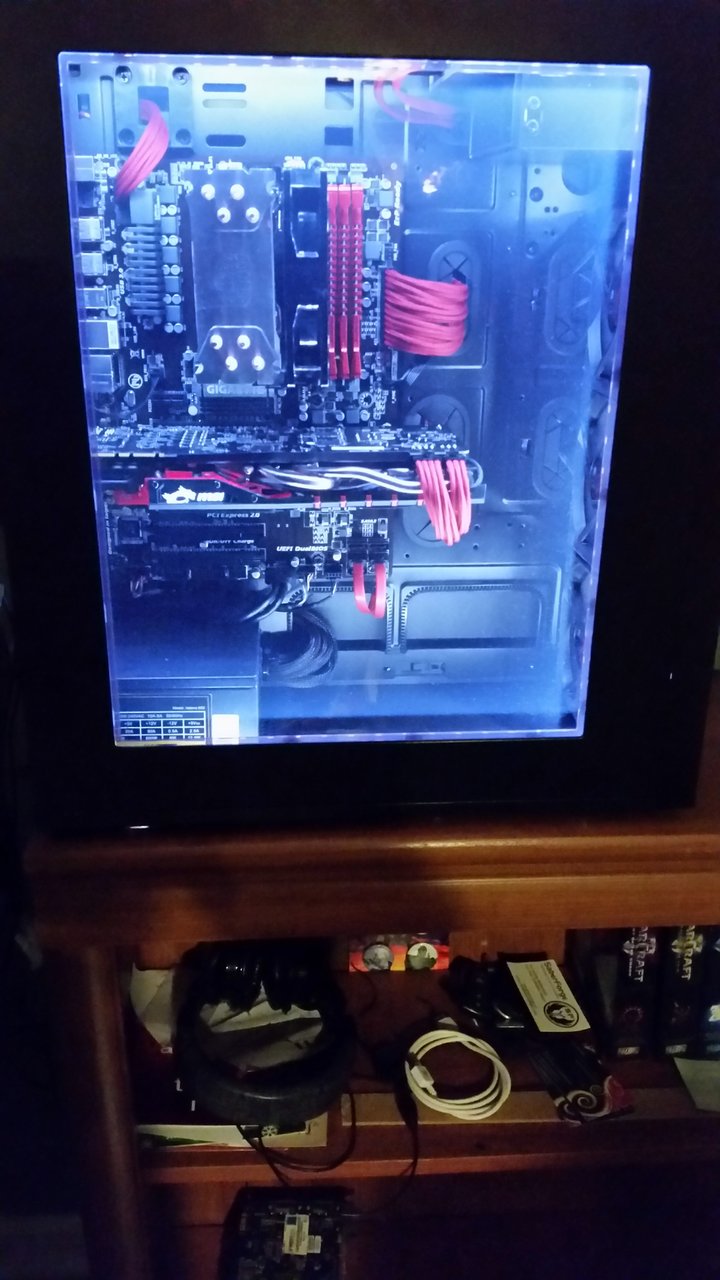 I don't see another one.

Thanks... I am still working on it daily. I need to get some more lighting to even it out, get all my orange and black power extensions installed and hide everything I can. I need some of those cable combs that keep your mobo cables with individually sleeved wires all straight and neat. I'll snap of a few more pics soon. I had a helluva time finding UV orange sata cables but just found some. I have some old DFI ones but not sure they'll pass 6g... I guess I should try them at least.
Z

Holy moly! That is awesome! I just ordered that TT X5 just based on your pics. That is one beautiful case . .just what I was looking for.

PolygonGTC said:
I don't see another one.
Click to expand...