Steam: how many hours?

I have some conflicting numbers, I typically go with what is on the main game page in the Steam client, which is 4600 hours, then again, I idled some to get item drops, but I can't imagine that amounted to over 1000 hours. I started playing Team Fortress 2 March 2008, I got tired of Valve's BS (creating unbalanced weapons and giving classes goofy abilities) and finally started playing all the other games I bought in early 2012 when I started logging my completed games in a spreadsheet. TF2 was a game that I consistently played for almost four years! It just got dumber and dumber, F that game.

Borderlands 2, 505 hours. Followed by Borderlands at 199 hours and Borderlands: The Pre-Sequel at 131 hours. And I'm still playing 2 and TPS.

I am doomed when Borderlands 3 comes out.
S

Susquehannock said:
In Steam, which of your games is highest "you've played" ?

If you were playing multiplayer, you probably have spent a lot of that time looking for matches.
Overwatch did something right, instead of sitting in a lobby, the game allows you to run around the level and kill one another while you are waiting. The older I've gotten, the more I am hating MP games because of lobbies or time wasted in matchmaking.
I used to play Battlefield a lot but I always hated that it took 5+ minutes to get into a game and then if it sucks, you get to do it all over again. I transitioned to COD because the levels load fast, the lobbies are a minute or less and there area lot of people online at any given time so that you can find a game rather than spending half an hour in matchmaking.

As for the original question (top 3).


I heard someone above who says they do not know why they even have such a great computer seeing that there are people here play 10x their time. I am in the same boat.
Last edited: Sep 24, 2017
J

I miss EA games being on Steam, lol

Borderlands - 2,275 hours (I have at least double that due to purchasing the full retail which didn't go through Steam)

Think I have roughly 400-500 hours play Day of Defeat Source. I know that some of the stats were lost though, I had well over a 1000 in that game at one point. Im sure that PUBG will soon rise past that mark though, I already am nearing the 200hr mark in less than 3 months.
P

By far my two most played are Garry's Mod and Counter Strike Global Offensive at 1,533 hours and 1,500 hours respectively.
The three under those are Black Ops 2, Team Fortress 2 and Terraria. Those being at 686, 439, and 230 hours played. Quake Live would probably be higher than Black Ops 2, but I started playing when it was still website only.
P

I agree with this completely, although I didn't start playing in 2008 didn't even have Steam then.
K

SvenBent said:
oh i forgot FFXI
I had a couple of years in combined play time there.
Click to expand...

If I had had Steam back when I played Flight Simulator, I'd have something like 20,000 hours in it by now, and that would just be FS 9. Add in FS X and FS 98, and man... I would have had more hours than most retired pilots by now. 90% of my flying was short hop stuff, most realistic nav I could manage, with ATC if it was available.
S

last time i checked mine it was in the 25k+

The game I spent most time in officially is most likely Runescape, clocked in at 365 days, which is a bit under 9000 hours.

Otherwise my highest clocked game on Steam is 200, Civ V, but I suspect that Fallout 2 clocked in at higher than that.
A

chenw said:
The game I spent most time in officially is most likely Runescape, clocked in at 365 days, which is a bit under 9000 hours.

Otherwise my highest clocked game on Steam is 200, Civ V, but I suspect that Fallout 2 clocked in at higher than that.
Click to expand...

You should give POE another shot!
C

I tried, and failed even more miserably LOL.

I started with the Legacy League (the league before this) and I managed to reach the maps in that league.

This time with Fall of Oriath, I lasted until Act 2 LOL.

Maybe because I am burnt out on it, but I plan to take a break from this league and try again after this one.

Don't get me wrong, I loved every minute of playing PoE during the last league (bought a lot of stash tabs too), and I really wanted to try Fall of Oriath too. Maybe I'll have better shot at it after I have taken a break from both D3 and PoE (and perhaps every other dungeon crawlers I have been playing lol).
S

Borderlands 2 for 651 Hours is my reocrod on steam

World of warcraft has me at 1006 days and change

Come at me bros! 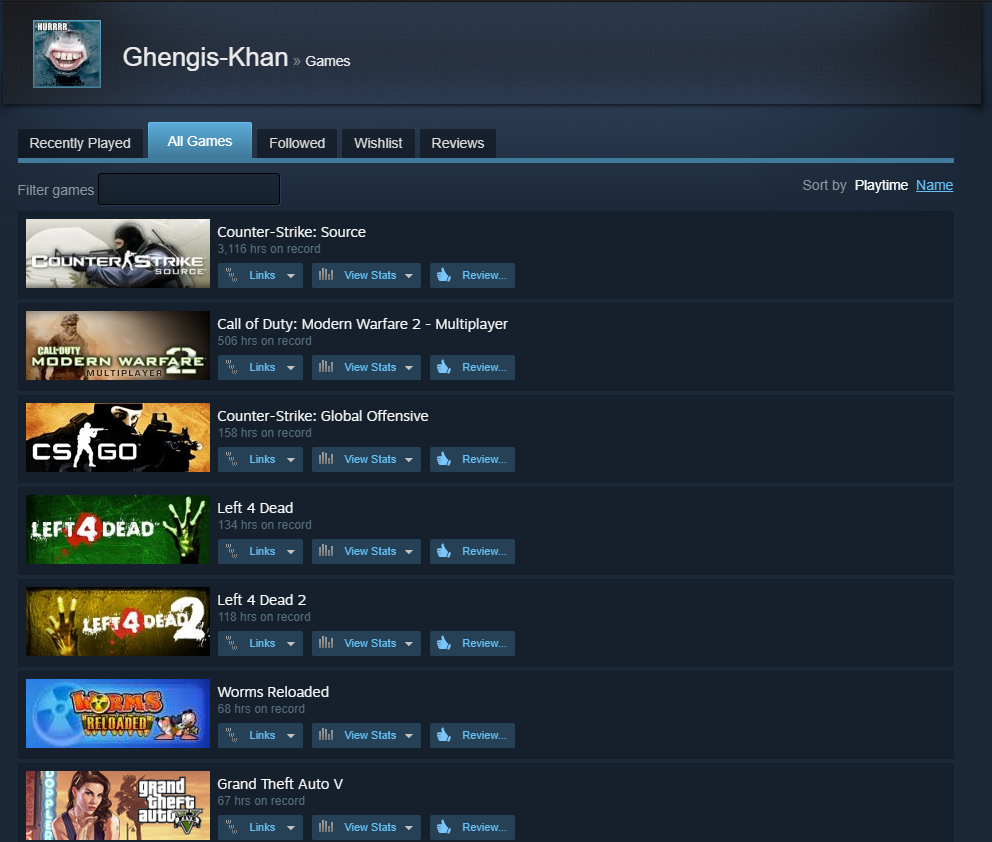 Yes, I love CS:GO ( have been playing it for ages it seems ) and yes, I love liverpool football club.

twonunpackmule said:
You're not a master until 10,000 hours
Click to expand...

just read an article show the myth of the 10k hour claim.

bizzmeister said:
Yes, I love CS:GO ( have been playing it for ages it seems ) and yes, I love liverpool football club.

What do you think of Klopp?

chenw said:
What do you think of Klopp?
Click to expand...

Hoping to get back to check out the latest update. Still paying for that sub..

I have a new longest-played game on my steam account: MGSV: currently at 648 hours, and only at like 60% completion. This isn't really a game you play, as much as a game you leave running AFK for weeks and weeks on end just so all your character-development shit will finish running in the background. Talk about some of the laziest and most poorly thought-out game design choices of any game ever. I can't begin to describe how sick of this game I am at this point... I should probably go find a more appropriate thread to rant about it...

Biggest for me would be Civilization 5 at 1426 hours.
Z

Armenius said:
538 hours in Dark Souls: PTDE. 578 hours if you combine Titan Quest: Immortal Throne and the Anniversary Edition. My TF2 hours lie, as my stats were reset sometime between 2008-2010, and I never played the game as much as I did before then. There is probably more than 1k hours there. CS 1.6 also doesn't have my total hours, for some reason. I opted into the initial Steam beta release just to play CS 1.6.

How is that playtime possible in Dark Souls? Isn't that a linear title? Did you just replay it a shit ton of times?
E

The vast majority of the games I've played did not involve Steam. Sorry.

Just a few hours spent shooting space aliens. Interesting fact is that I've only played one game of DOTA 2 in my life. I just LOVE watching great players destroy each other. I only have a few friends and they aren't into those types of games.

I like source too much no matter how much friends have tried getting me into csgo, lol.

Just curious how you guys rack up so much time with work/life balance. I thought I had a decent chunk of hours in Skyrim at 163 hours. Man I need to play more games. I only have 700+ of them on PC alone.
D