Mine made so many strange sounds, hard to explain. even with the fan not spinning. had no hopes for improvement when replacing fan with a Noctua but it solved all issues. seems that the fan engine was messed up
D

leifeinar said:
Mine made so many strange sounds, hard to explain. even with the fan not spinning. had no hopes for improvement when replacing fan with a Noctua but it solved all issues. seems that the fan engine was messed up
Click to expand...

Was it also like a hard drive?
What noctua fan did you used?
L

sorry, late reply. maby like a squeeking hard drive never heard such a sound from any computer gear. just used a ran old i had lying arround, spinns about 650 rpm
D

Update: my PSU has been remplaced by silverstone under 10 days. Works without any noticeable noise now.
Thanks!
L

Hmm, not sure if this has been mentioned here or in some other thread already, but there is a revision without semi-fanless system out now:

- Update: After this review went live, SilverStone provided us some helpful information on the issues facing the original SX500. It is planning on releasing a "V2.0" of the SX500-LG, which will remove the semi-fanless function so the fan can start normally and run within its intended voltage range. Our advice is to wait for the V2.0 if considering the SX500. [source]
- SilverStone SX500-LG product page: Silent running 120mm fan with 18dBA minimum (SX500-LG V2.0) [source]
U

Has anyone tried the new V2.0 version yet? Thinking of going for one but can't see any reviews of it.
W

I too had issues with the fan making ridiculous noises. I really wanted to stick with this power supply though so I did a fan mod. I used a Thermaltake LUNA slim 120. I'm not using the thermal resistor, instead I hot glued my own 500ohm variable resistor to the back grill so I can adjust the speed and noise as I wish. So far so good, no thermal issues under full load with a GTX970 and I5 6500. Now its perfectly silent and I love it. I wouldn't recommend buying this power supply because you have a very high chance of either having to swap it out or mod it yourself. But I'm very happy with my results. 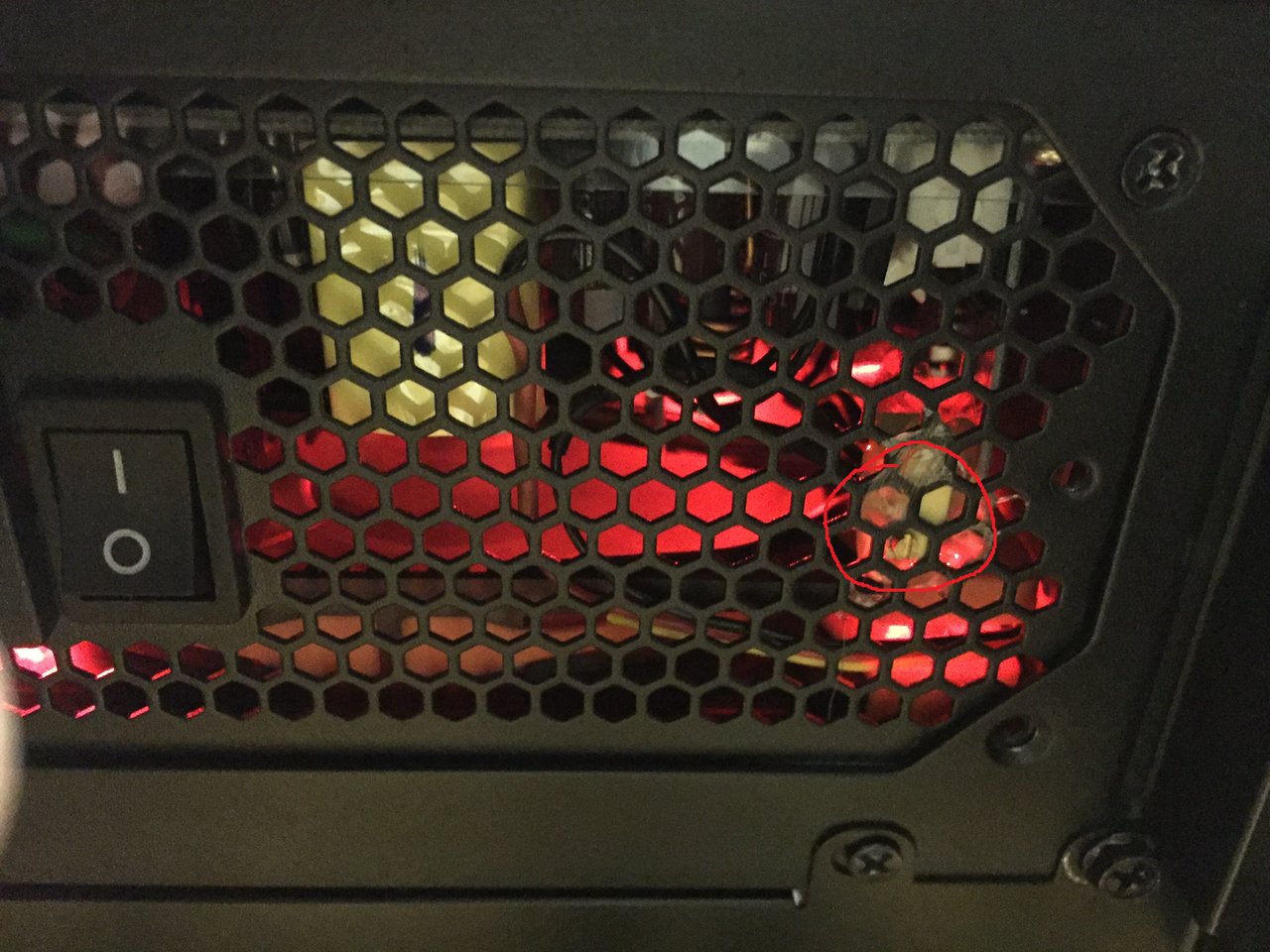 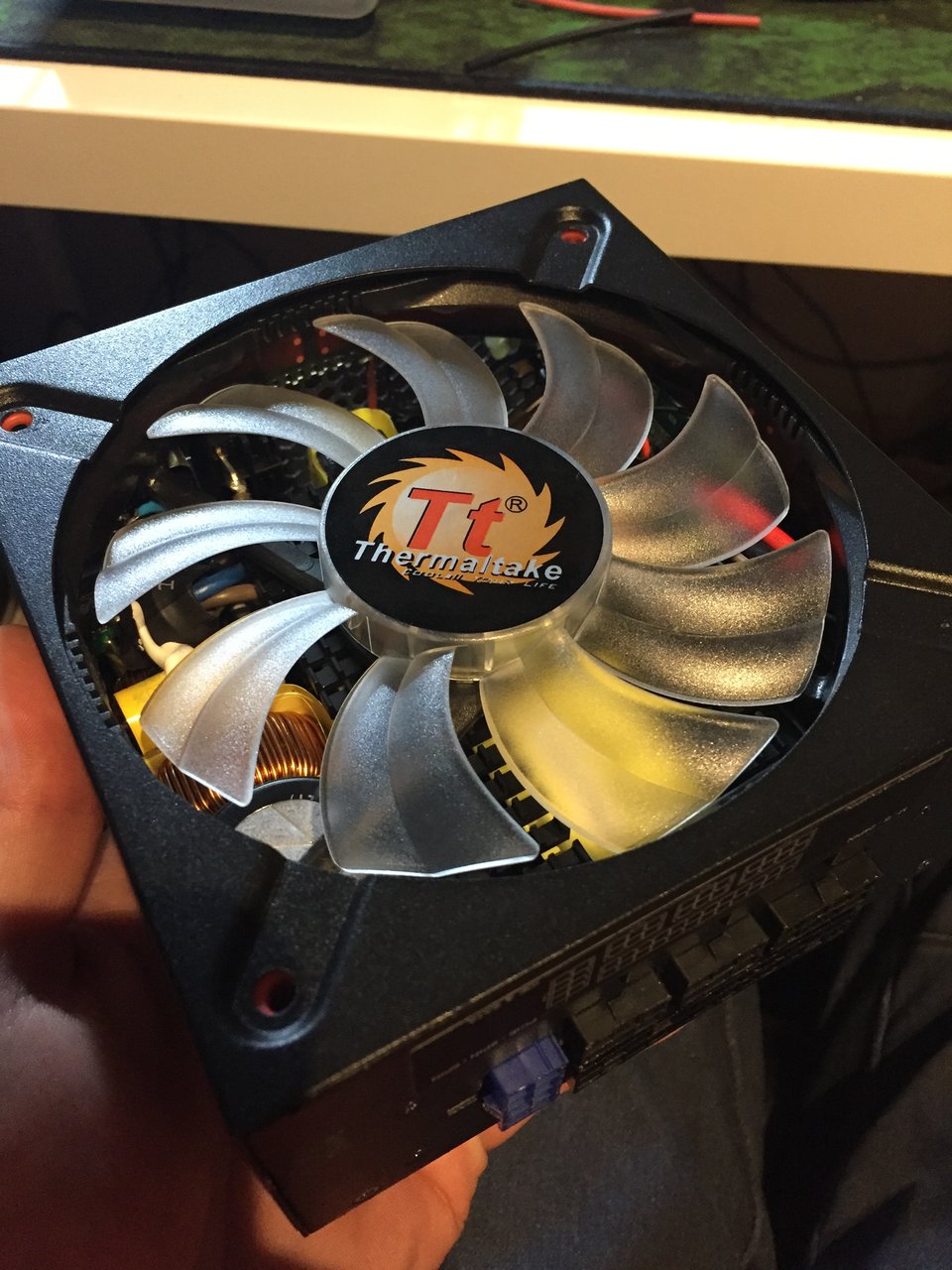 Well my V2.0 will be delivered today, didn't expect it to get dispatched so early as it was quoted for the last week of Sep initially then got updated to mid Sep but seems I was lucky! Not sure if Amazon made a mistake as their listing still states "Delivery in 1-3 weeks".

Will let you guys know how I get on with it.

EDIT: I was a bit sceptical thinking maybe they'd send a V1 by accident but nope, it's definitely a V2.0, just arrived! Will install it later as unfortunately I have to work overtime from home today.
Last edited: Sep 10, 2016
U

So here it is!

(Sorry about the lighting of the first few photos, had the colour balance set up wrong.) Didn't expect to receive an ATX->SFX bracket so that was a nice addition.

Can confirm the PSU runs silent (fan is spinning permanently though) and is super cool. In my bad airflow case it does not even get hot or spin up on load (i7 4790K and GTX 970). Really happy with it!

My case, CPU and GPU fans are (unsurprisingly I guess) louder.
D For this particular mod, theres 2 possible fan to use. Here they are:

There are 4 little screw holes that fix the top cover in place. All around the sides of the PSU.

The solution is to drill 4x new 3mm holes at a distance 7mm directly (vertically) underneath the existing holes. You will trash the cover if you drilled in the wrong place. Or if your holes are not uniform the same z-distances (within 1mm of each other tolerance). So be exact and use a centre punch first.

Also use a centre punch (behind with wood block) to 'dent' inwards the metal. This help to much better accomodate the countersunk screw head. And stop it from sticking out. Also can use (*very LESS deep) a 5mm drill bit to bore out the surface and make more of shallow countersunk bevel to also better accomodate the head of the screw. ! Without drilling too far through and end up trashing the top cover entirely.

Taking care, drilling these new holes is actually pretty easy, and can be done with few effort of any regular hardened drill bit in a small hand or cordless drill. The cover might look like its a hard steel, but actually its only a mild steel. So really anybody can do it without special tools.

Re-assemble with new fan, squeeze down very tightly. Also use the fan's included rubber gasket, place it under the fan.

This simple modification then raises the top cover height all upwards by 7mm. Which is just barely enough to cramm / squeeze in the noiseblocker fan. Because this fan has a good squashable rubber mounts. It fits very well into the space, and without risk of touching / made contact or vibration. This is potentially a very good solution. With the caveat just to watch those loose cables that can be an issue sometimes. Check for a free rotation after screwing all together. The fan cable just hang out the back (on back left side), routed around the rubber corner, and out through the new 7mm gap.

The fan characteristic is most similar to the discontinued Scythe Gentle Typhoon (Scythe GT), the 1100rpm -13 variant model number. Expect the fan performance to be a little bit less than the Scythe GT but still excellent none the less. As a bonus, the styling / color is very good and most closely matching the original PSU fan.

You will need to plug the fan either into your PC motherboard, or else a dedicated fan controller. The PSU itself cannot drive it because the range of voltage levels given by the PSU are tailored specifically for the stock PSU fan only. And are therefore (unaltered) are never going to be correct to make this fan spin at appropriate speeds.

You could try modding the PSU further or adding extra voltage level conversion circuit in-between. However its not really simple then anymore. Especially because there is just no free room whatsoever inside the PSU, it is so crammed.

Most ideal solution is that you might already have some ASUS motherboard, which have a built-in header for plugging in external temperature sensor. That can be placed / routed to be inside the PSU chassis and then in ASUS BIOS can be set to control the PSU fan speed. All through the motherboard itself.

Sorry I have not had change to test this PSU mod myself yet. But hopefully in next 1-2 weeks I will have my motherboards back from RMA. And can try it then.

Will also need a little more researching. To find out what exactly the CFM / rpms curve are supposed to be at a range of measured PSU temperatures. So as to match the behaviour of the original stock fan. I cannot test for that.

Perhaps the neeeded info can be gleaned on the web. If cross referenced multiple sources. By determining the common measurements of airflow / CFM of the stock fan and mapping that onto new fan. Here is 1 part of the infos, (but not all of it):

Otherwise its just generally to be noticed that there is a certain minimum rpm above which these Noiseblocker fan become a lot more effective. As shown in "silentpcreview" website, fan roundup 6, page 4, table 2. Link: http://www.silentpcreview.com/article1266-page4.html

Anyway, this "Noiseblocker Multiframe M12-S1" starts to kick in with a good returns in performance at the level of 840 rpm, and going higher up. So then 840rpm is best baseline speed to configure / for the minimum level.
D

Its been more than a year that I did 25mm fan mod and my fan is running 24/7 but I want to install a thermocouple to the OEM location and run the Silverstone's fanless operation with 41 C threshold.

Well, shit... I made everything so quiet in my A4 that now I hear the rattle.
S

I couldn't stand the rattling noise of my SX500-LG and replaced the original fan by a Slim 120mm 1200rpm Scythe Fan and its working just fine! The Scythe fan is even slimmer than the original one and is pretty easy to install. I just cut the cables at a good length and soldered the ends together. After that I sealed the exposed wires with a heat shrink tube and put them back in place.

Unfortunately i lost the garanty but also the noise!

I know that this thread is two years old but my question is - did they fix that noise issue? SX500-LG is still being sold and actually if not that reported problems, I would already have bought one. So, anyone?
S

qhash said:
I know that this thread is two years old but my question is - did they fix that noise issue? SX500-LG is still being sold and actually if not that reported problems, I would already have bought one. So, anyone?
Click to expand...

I'm still using it in my server to power an Intel Xeon-D and six 3.5" hard drives without noise complaints.
E

I don't know. I had one when it originally released and sent it back to Silverstone to resolve the noise issue. The replacement unit was even worse so I switched to the Corsair SF600. Even that I had to replace the fan with a Noctua, but now I'm happy.
You must log in or register to reply here.
Share:
Reddit Pinterest Tumblr WhatsApp Email Link
Top