I recently upgraded my system and had the challenge of using a closed loop on my cpu and gpu.

Replaced the fans with Arctic F12 PWM which silent until under heavy load.

I like the case personally because it sits under my monitors on the desk.
It has that 'sleeper' look to the system. You wouldn't know what was in it until you poke around. 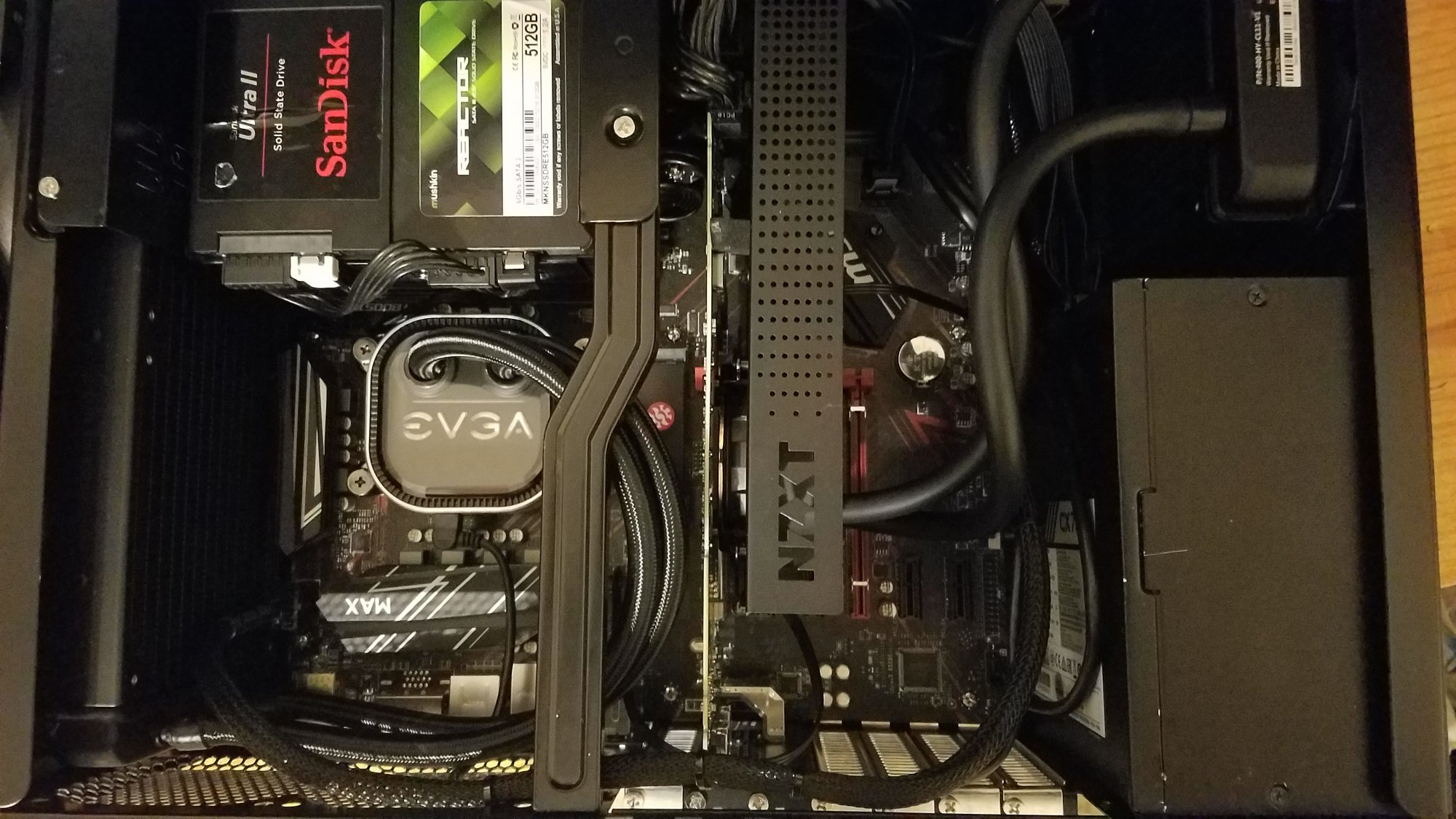 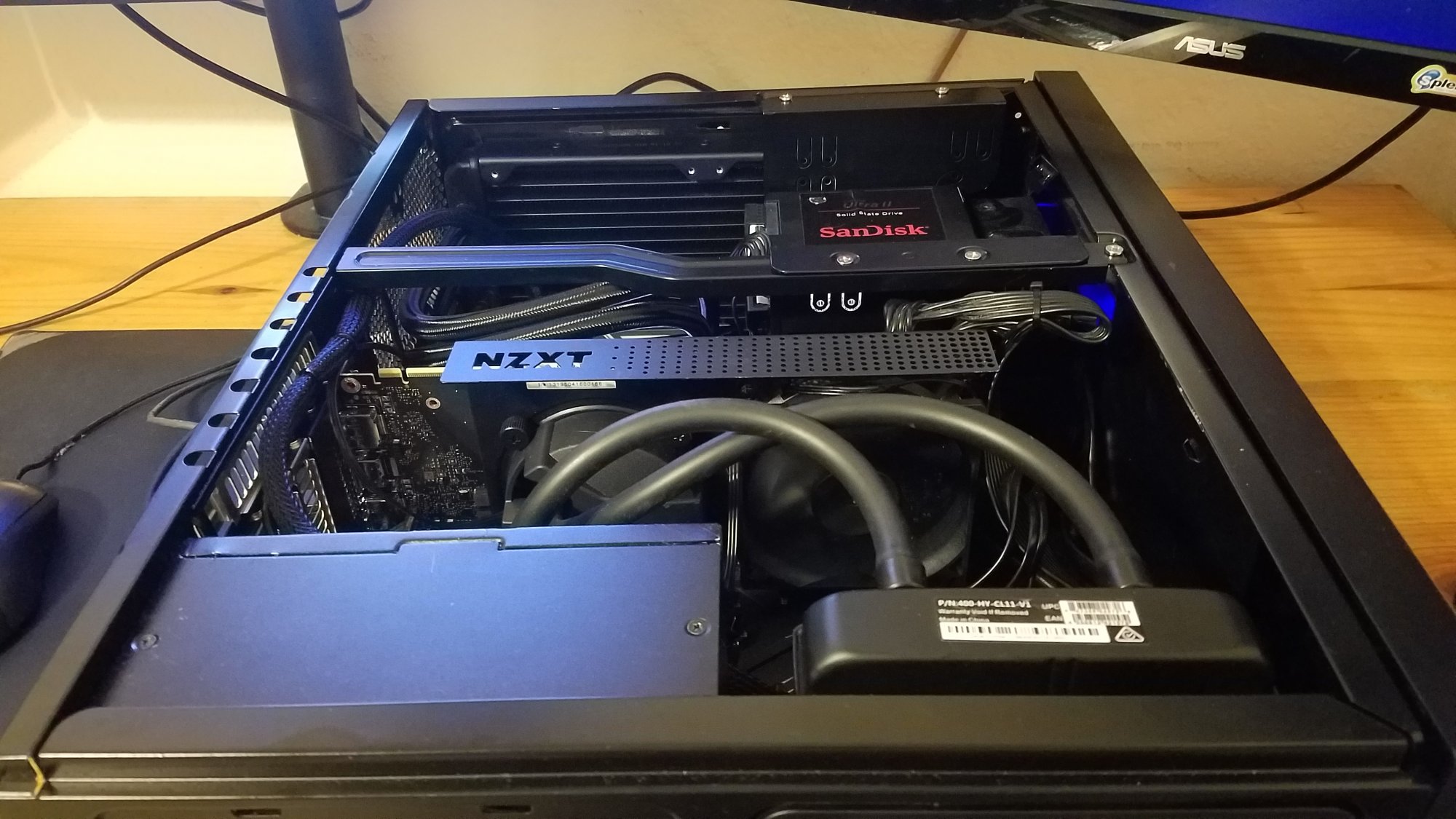 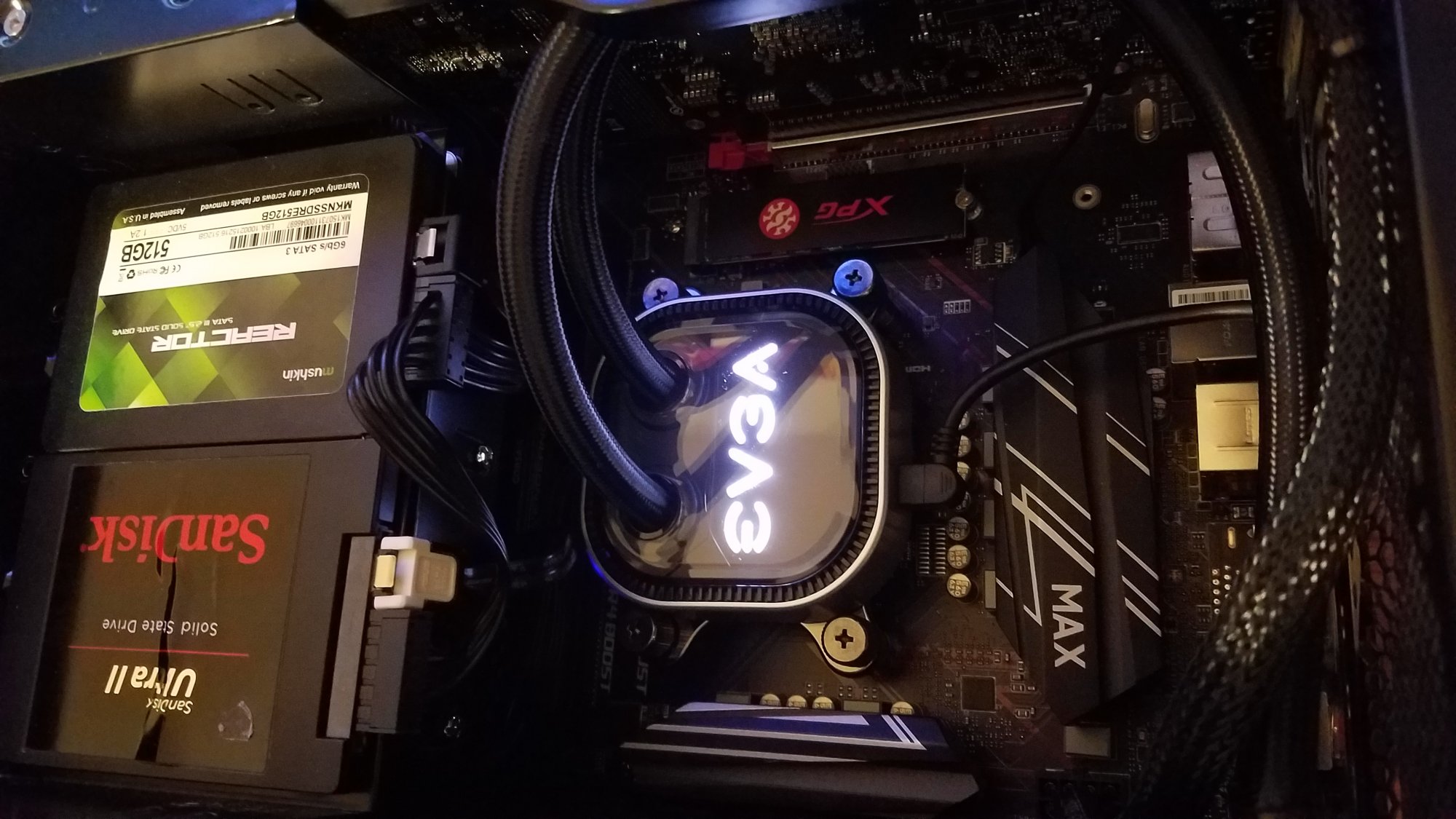 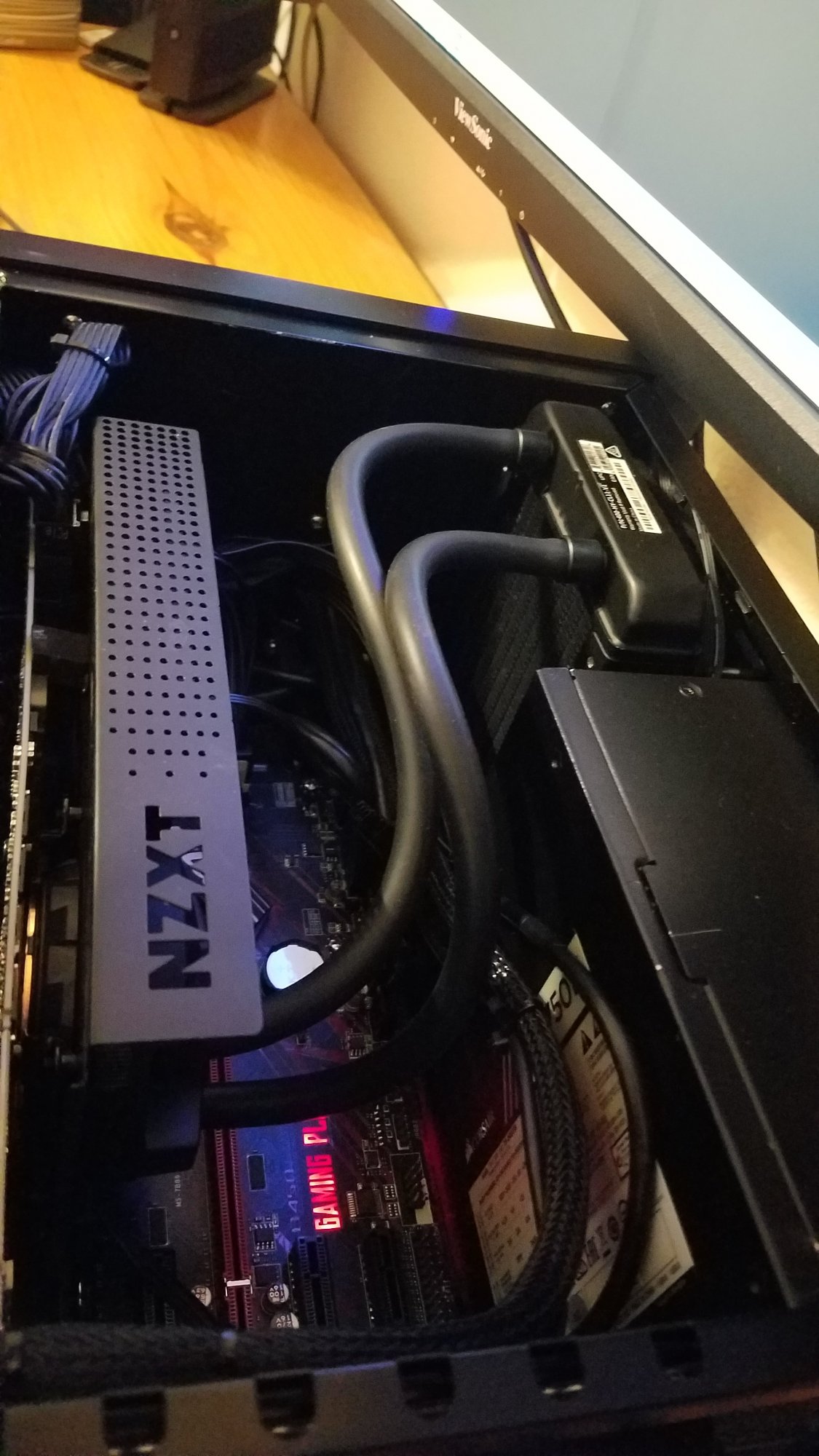 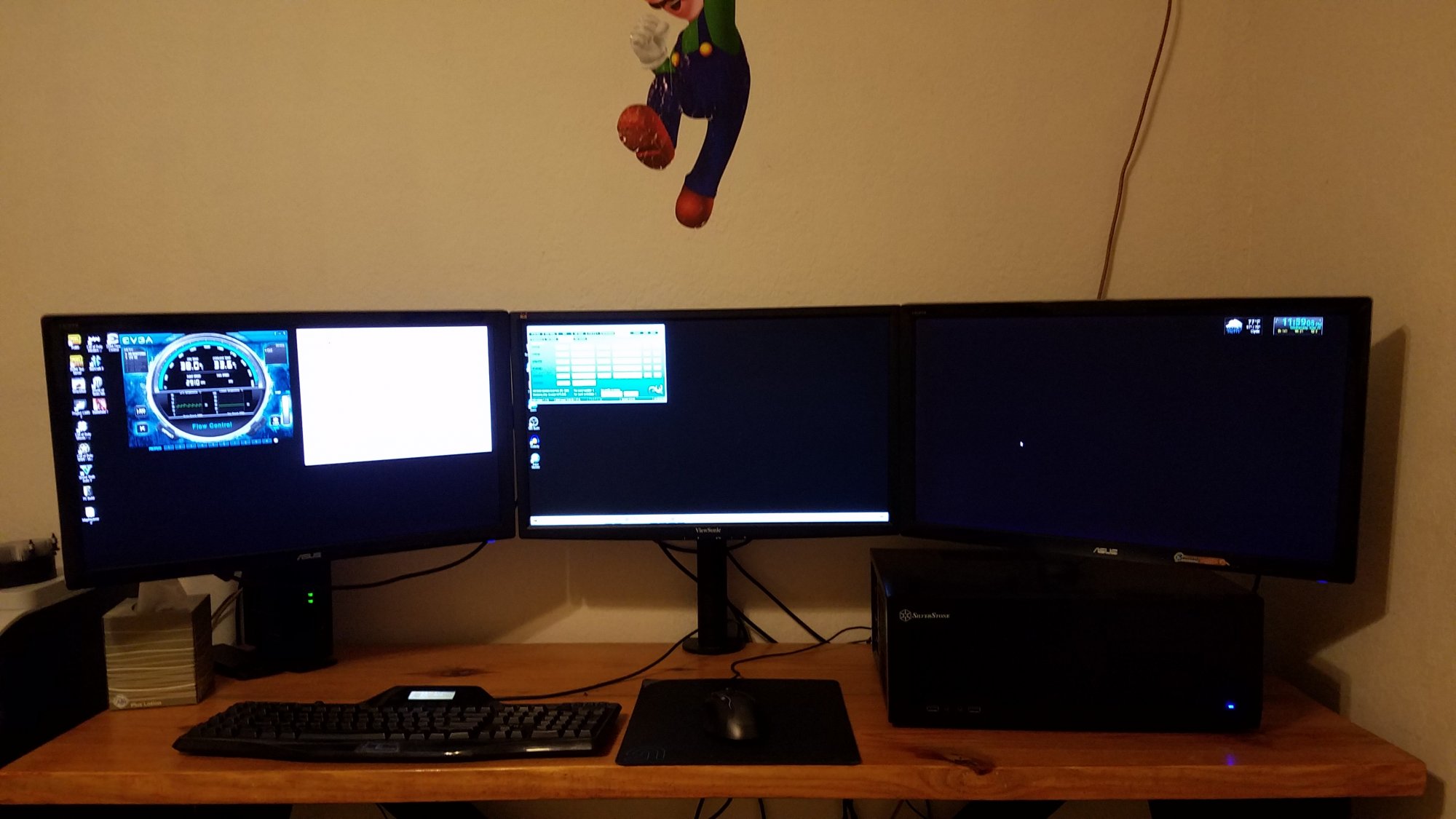 I was thinking about doing this exact thing over the weekend but ended up going with the Core G3 case since i can lay it flat. How are temps?

GPU temps are doing well but I'm underwhelmed by the CPU results. Part of the temp spikes are the vcore voltage changes when the computer is under load to get 4.2 ghz.

CPU and GPU usually stay between 60-65C and it is pretty quiet.

Things that made me a bit uncomfortable:
120 Radiator rubbing against USB3 cable from front of case - Well documented with many people.
Hoses from 240 are touching USB/PS2 ports on IO shield. No real pressure but it would not work if the motherboard had the VRM coolers that connect all the way to the IO shield.
N

This past week I was having stability issues where all three monitors would just turn off and disconnect. I've narrowed it down to being caused by using one power cable on both the 6 and 8 pin of the card. I added another cable from the psu to the card and it has seemed to stop the issues.

This brings back memories. Years ago I stuffed a full loop into a GD case with a 360mm rad internally. I remember it to be the biggest pita build ever. You temps look pretty good given the case and cooling.
H

I use this case too for my PC!! I have a 3700x and a red dragon 5700xt. How does the AIO fit for the CPU cooler?? do you need the fans mounted externally? I have my case rack mounted with noctua fans
R

Surprised about your CPU. I have a ryzen 1600 with only a CLC12 and it keeps temps in check pretty well. Ordered a 3700x to replace it, so I'm curious if the 120mm rad is going to be ok (waiting on MB RMA at the moment, free). My case can fit up to a single 140mm rad (SG13), but that cuts down on room for GPU length. Anyways, looks pretty good for a tight space.
W

noteworthy said:
I recently upgraded my system and had the challenge of using a closed loop on my cpu and gpu.

Replaced the fans with Arctic F12 PWM which silent until under heavy load.

I like the case personally because it sits under my monitors on the desk.
It has that 'sleeper' look to the system. You wouldn't know what was in it until you poke around.

What is the thickness of the rad+fan you have successfully connected to the CPU in your build? I've been really wanting to get this case, but, I saw some reviews that a rad+fan can't fit in that location due to the poor clearance? Can a corsair H60 fit there? I have a Asrock X99 Extreme6 board (it's a bit old). Would this board and a Corsair H60 work in terms of clearance? If you fit a rad+fan there, will you not be able to install a blu ray drive? Any info you can provide would be very helpful./ Thanks.
D

Why did you use 120x28mm rad CLC on GPU rated 160-260w TDP while using a 240x28mm rad CLC on CPU rated 95w TDP? Lack of space for bigger rad on GPU? Or not able to mount pump on GPU below top level of radiator?
You must log in or register to reply here.
Share:
Reddit Pinterest Tumblr WhatsApp Email Share Link
Top