Hello everyone and welcome to another review. Today we are taking a look at the Asus TUF 6700XT. Yeah I know I promised to publish the i9 11900K review but I would need a little extra time on it as I am overclocking it and comparing it aganist the LTT gold sample 10900K. So today we will do a 6700XT review with the 11900K CPU, so at least it will give you an idea of how a 11900K will perform in gaming. Disclaimer here before you look at all the data, the RTX3060 and RTX 3080 scores are tested with a 11700 non K version instead of the 11900K. So you should not compare the score directly. There are enough good reviews of 6700XT online if you just want to know how this card performs. The point of this review is, however, should you pay almost double the money to get a ‘Premium’ 6700XT. 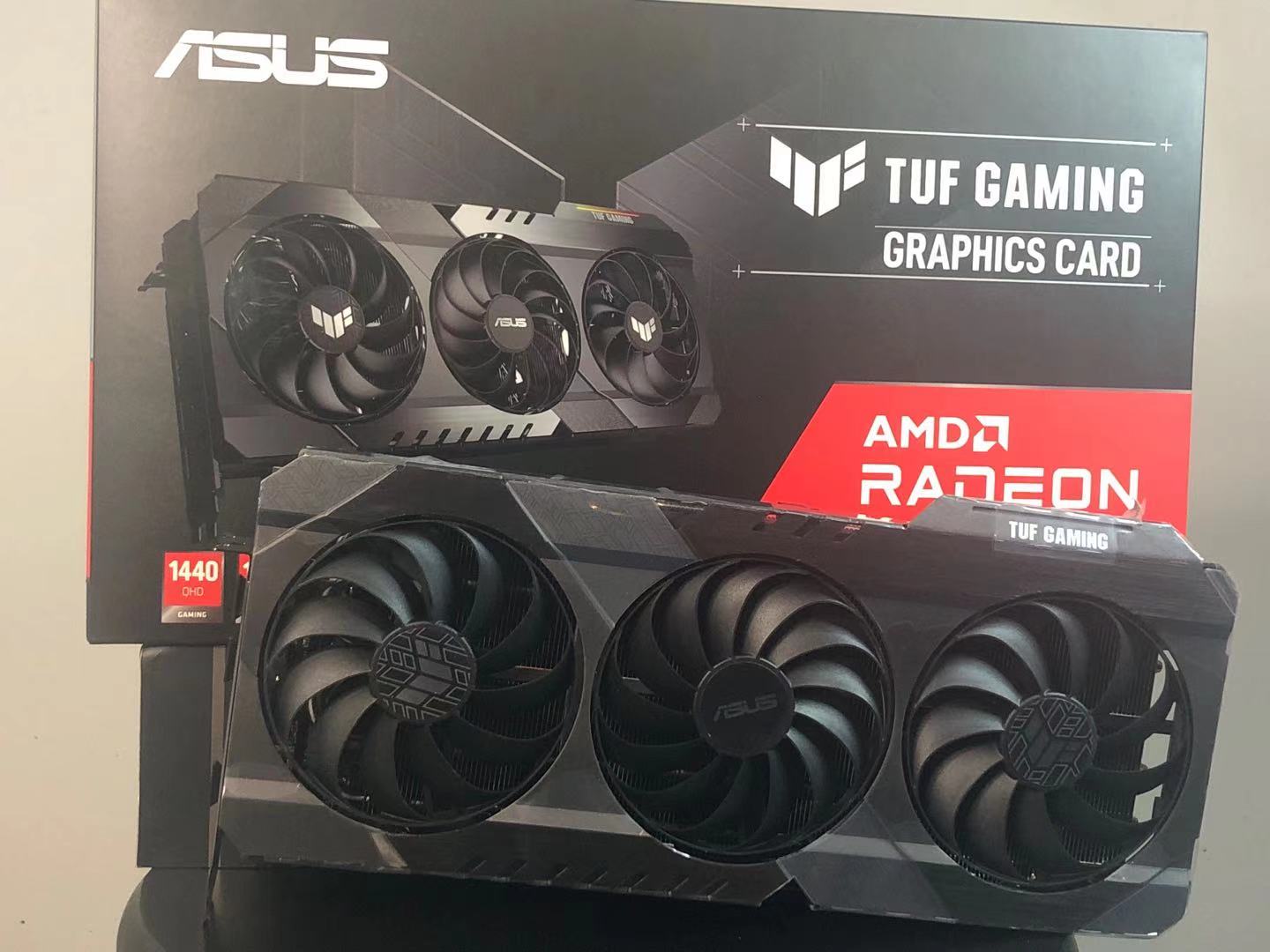 I was trying to search for other 6700XT TUF reviews online however there is none. This is very strange considering the TUF is a pretty popular card. But anyways, here comes the first review.

First impression of the card, it’s huge. Here are a few things for comparison. This is a box of Founder’s Edition 3070, and a AMD Dual GPU HD7990. In the front of that is a Founders Edition 2080 with HP shroud, and then a Tesla P4. There are two of some future Xeon CPUs that I cannot say too much about, but it's the biggest CPU Intel ever made. And in the very front a kaby lake 7700K. So you get the idea, it’s ridiculously bulky for a mid end GPU. 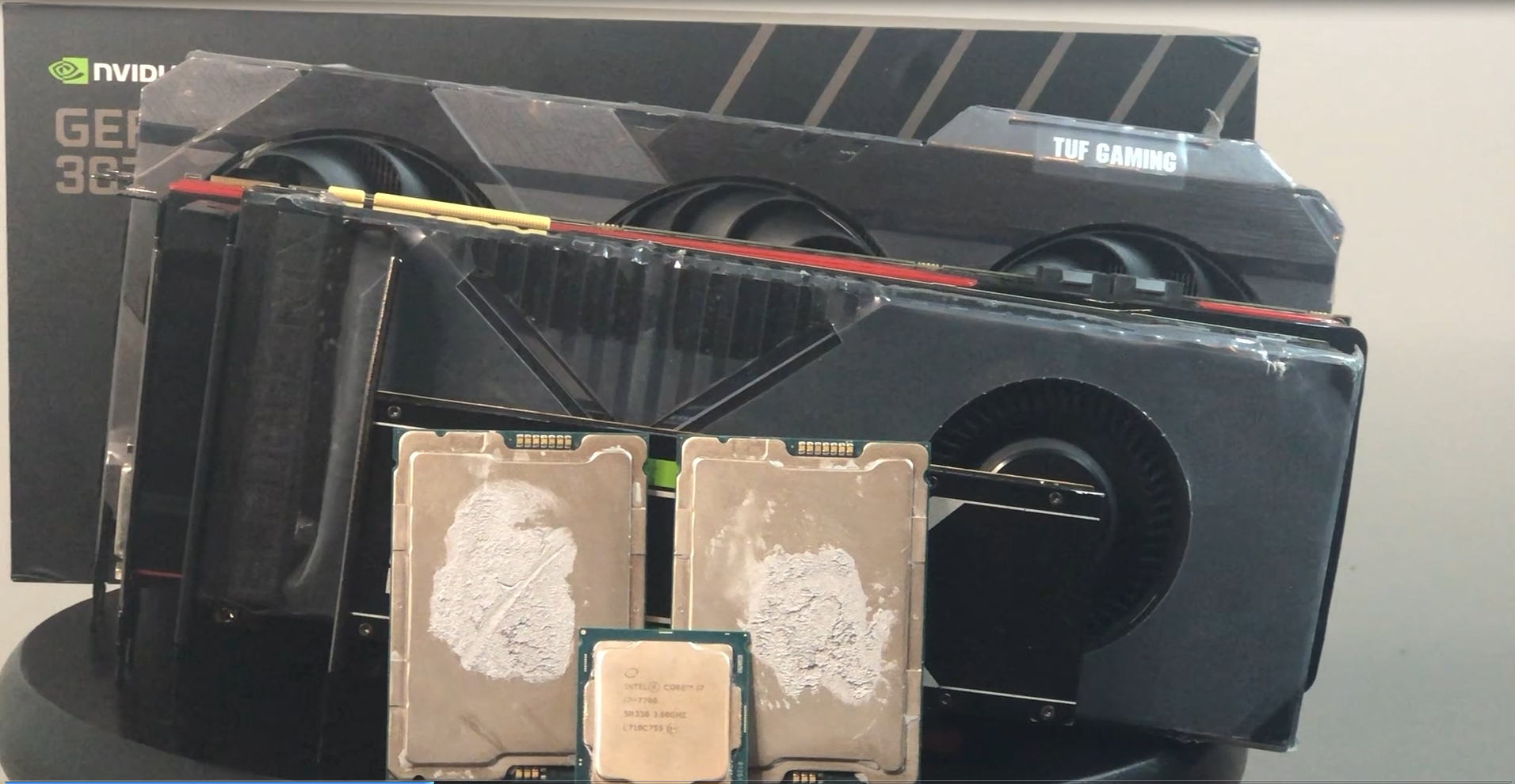 Let’s take a closer look at it. So it has the same TUF shroud that Asus put on all other TUF cards of this generation. The aluminum shroud feels solid, and the only RGB available is the small TUF logo on the very right of the card next to the dual 8 pin connector. 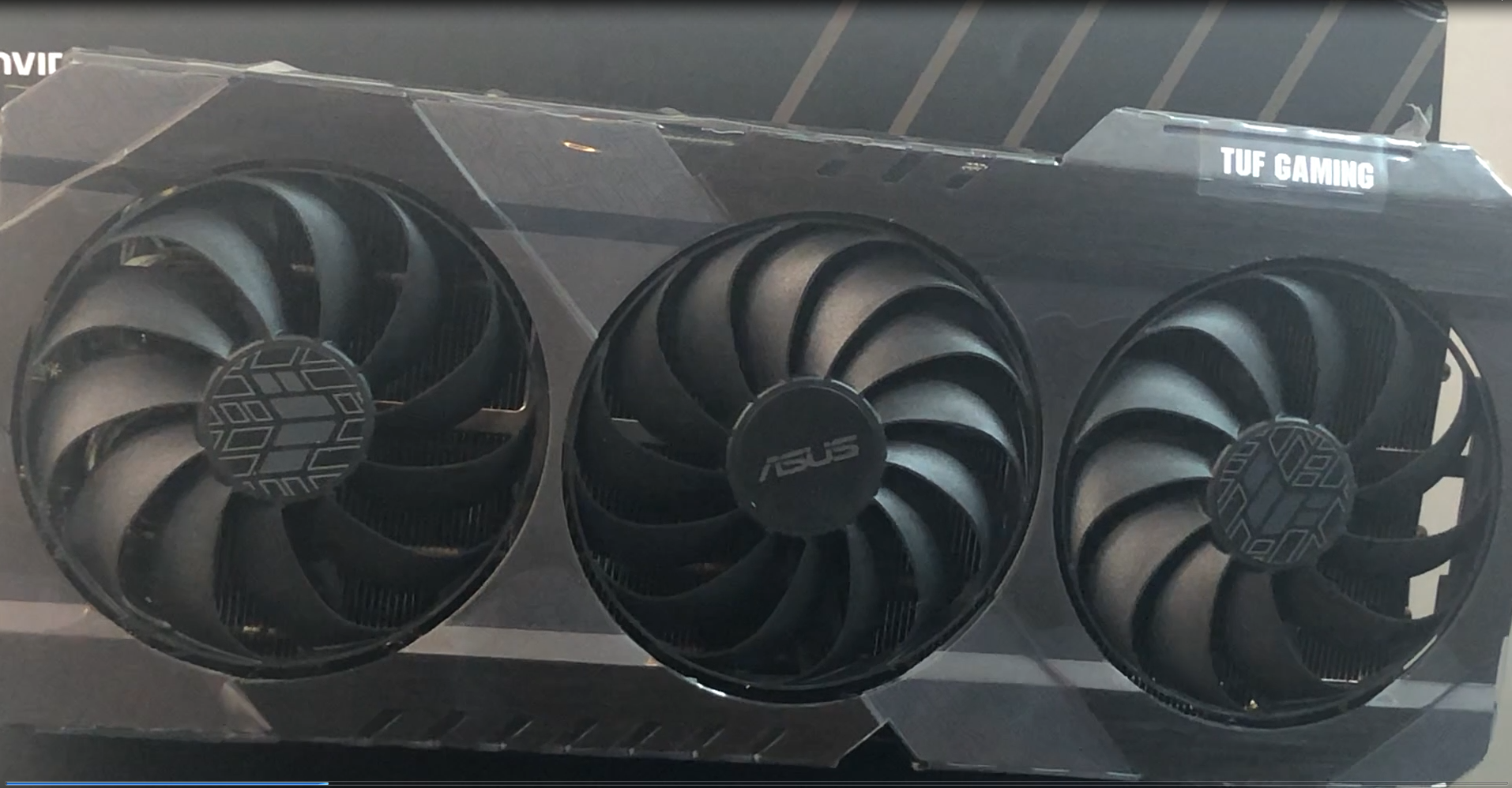 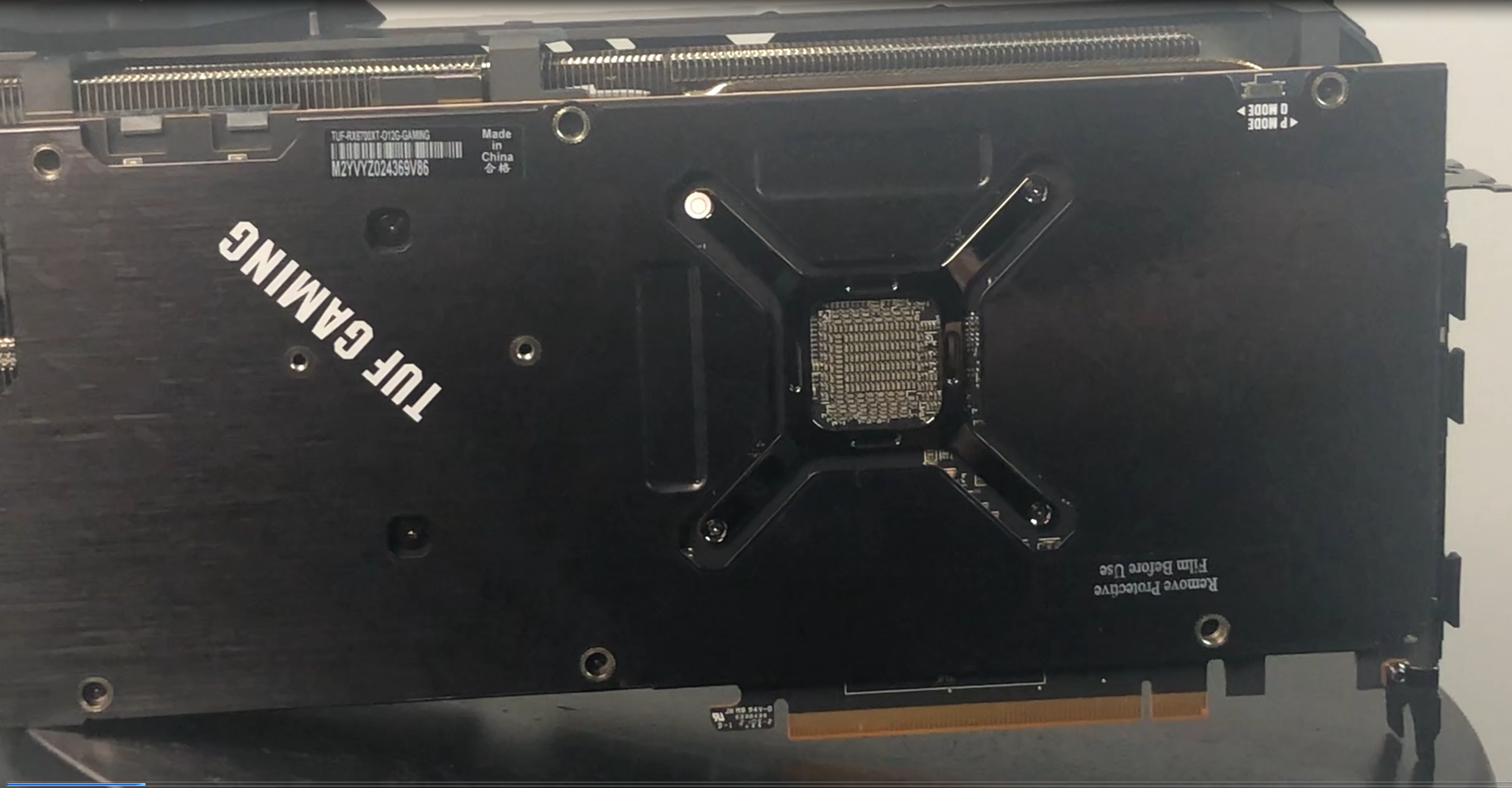 It is a very well built for mid range GPU with $479 MSRP. The only problem is, it carries a $799 price tag, which puts it in the same market segment as the Strix RTX 3070. 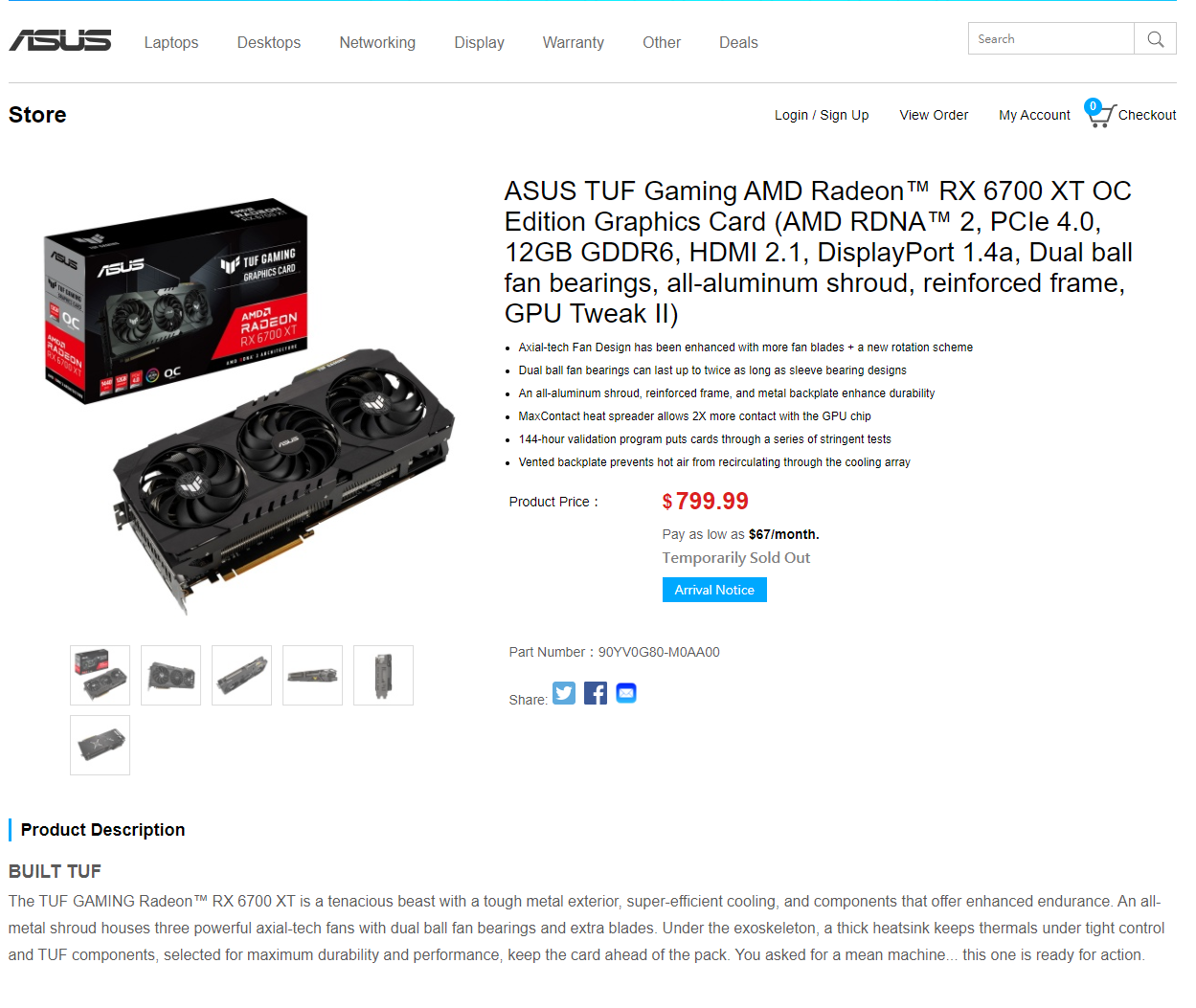 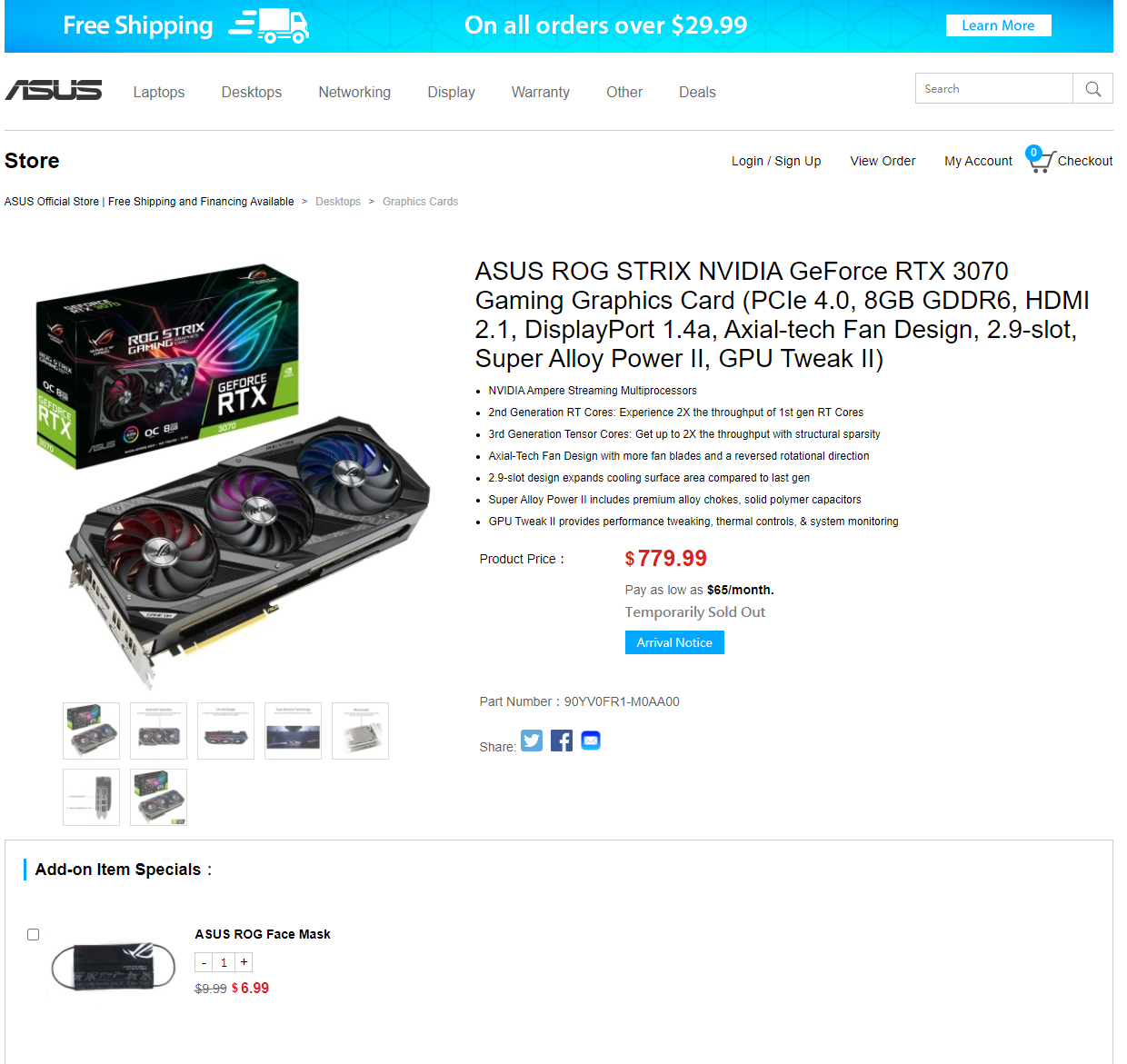 Now, let’s run some benchmarks and see how it goes. Again these are not being tested with the same CPU so please don’t use it to compare their relative performance. 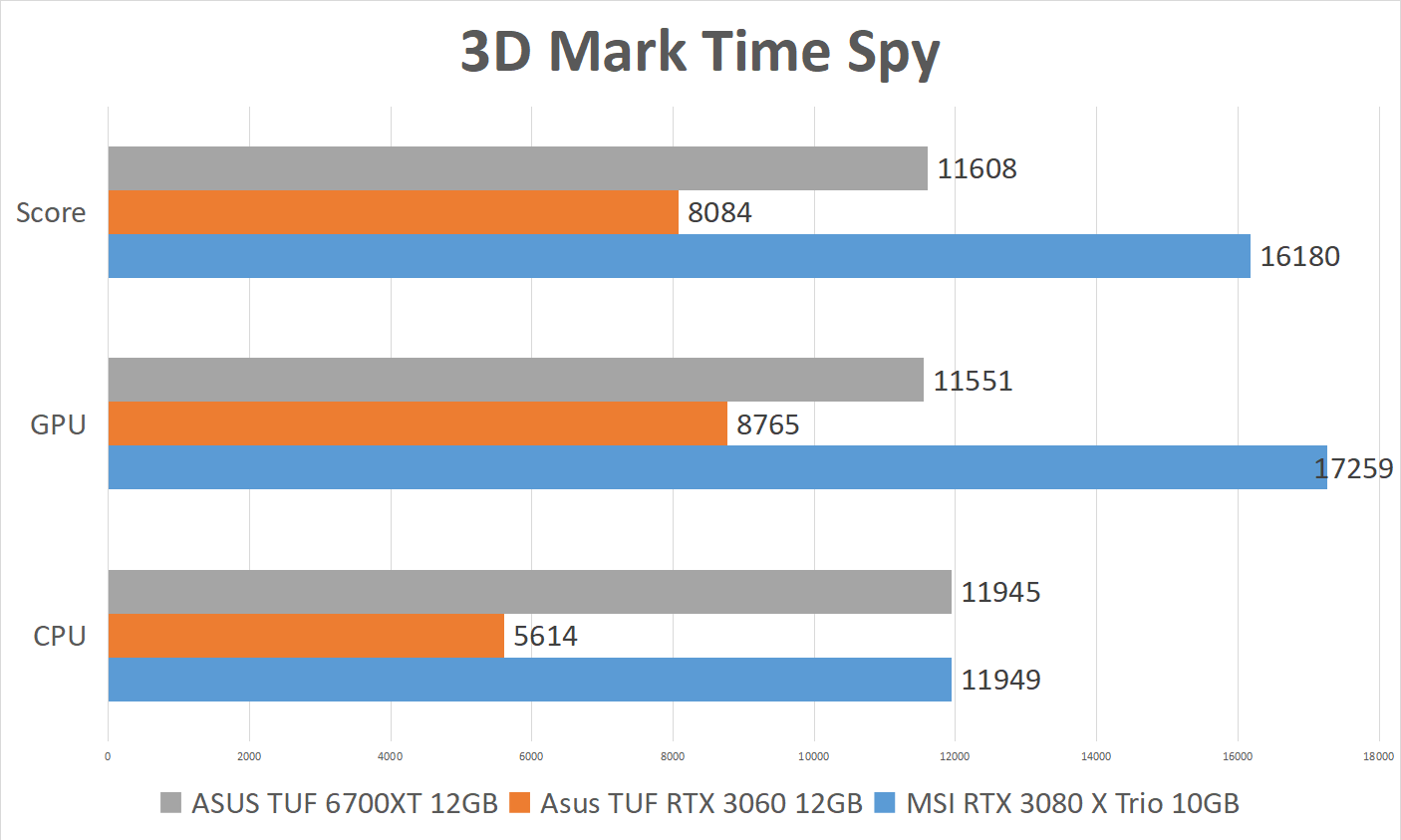 In the Unigine benchmarks, we ran Heaven, Valley and Superposition under 1080P Extreme settings. 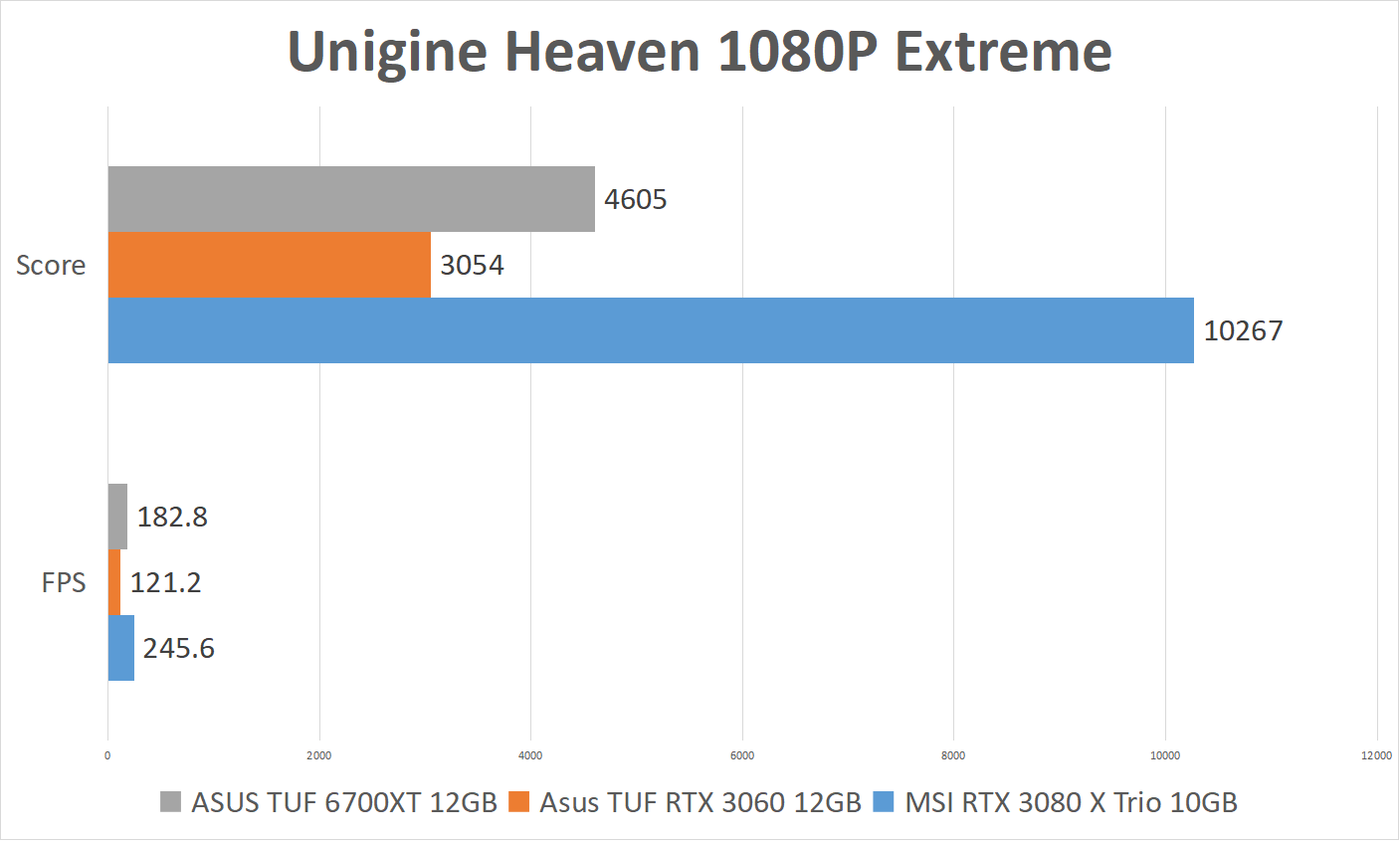 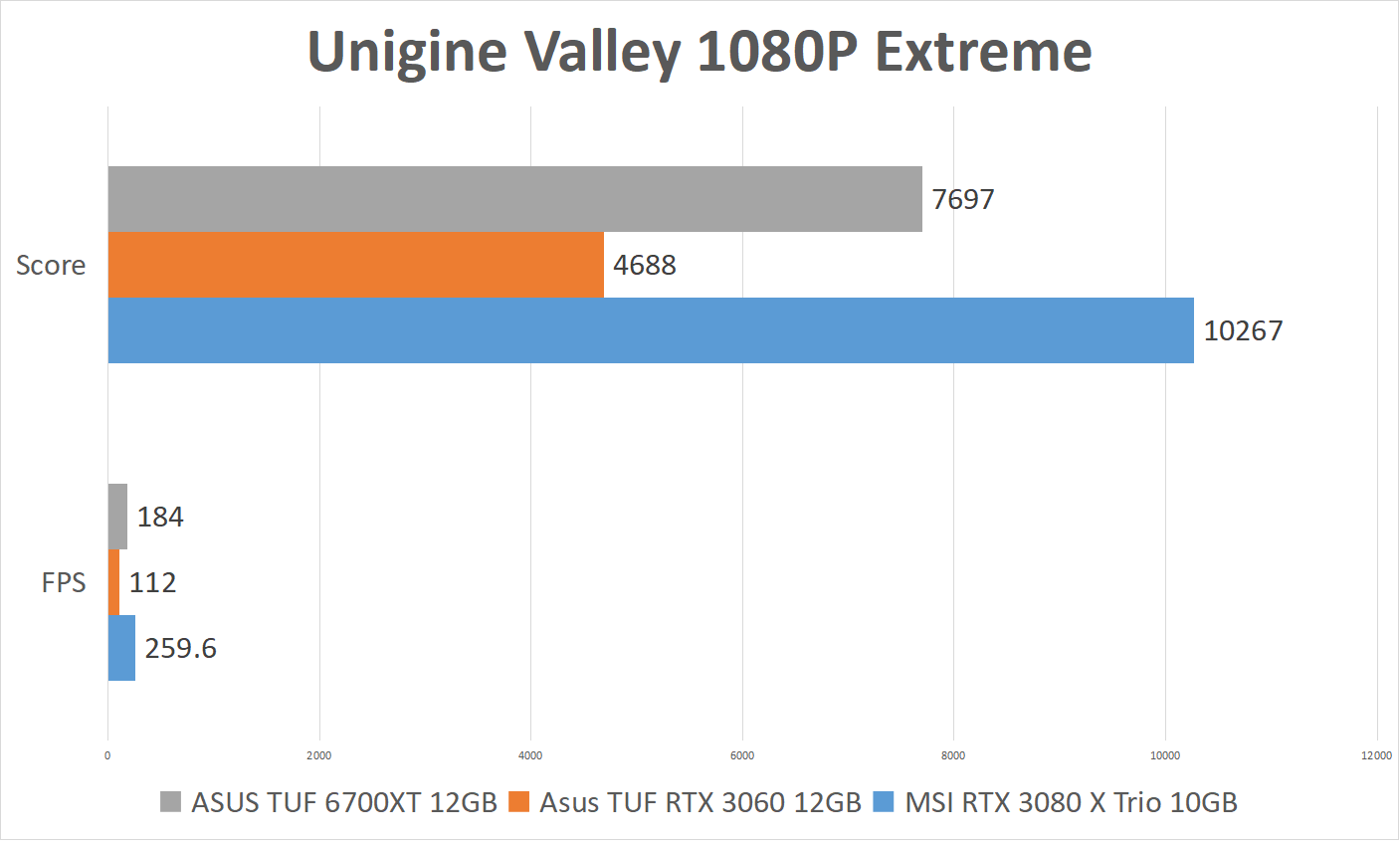 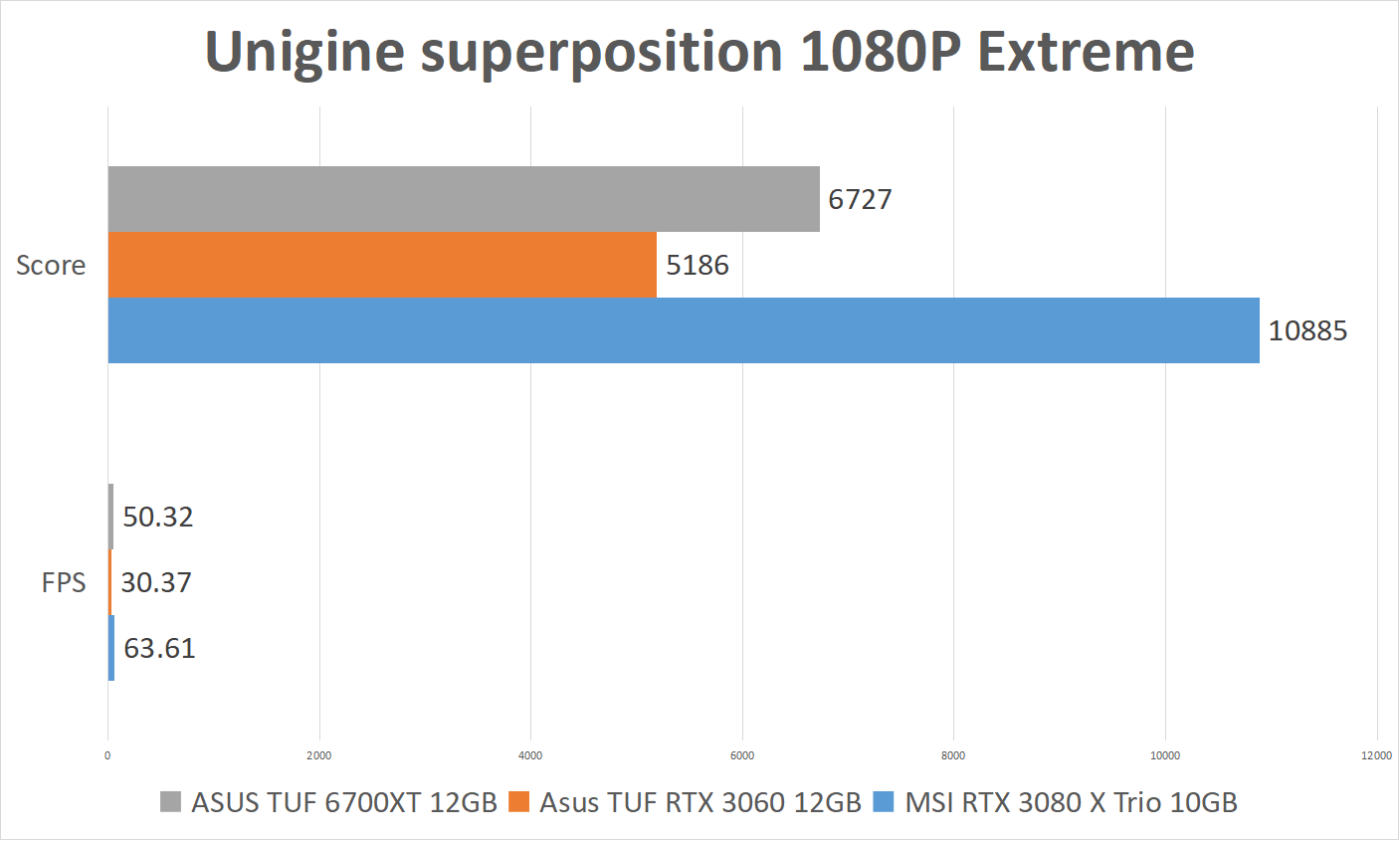 In actual games, we ran Dirt5, Horizon Zero Dawn, Shadow of the Tomb Raider and Hitman2. 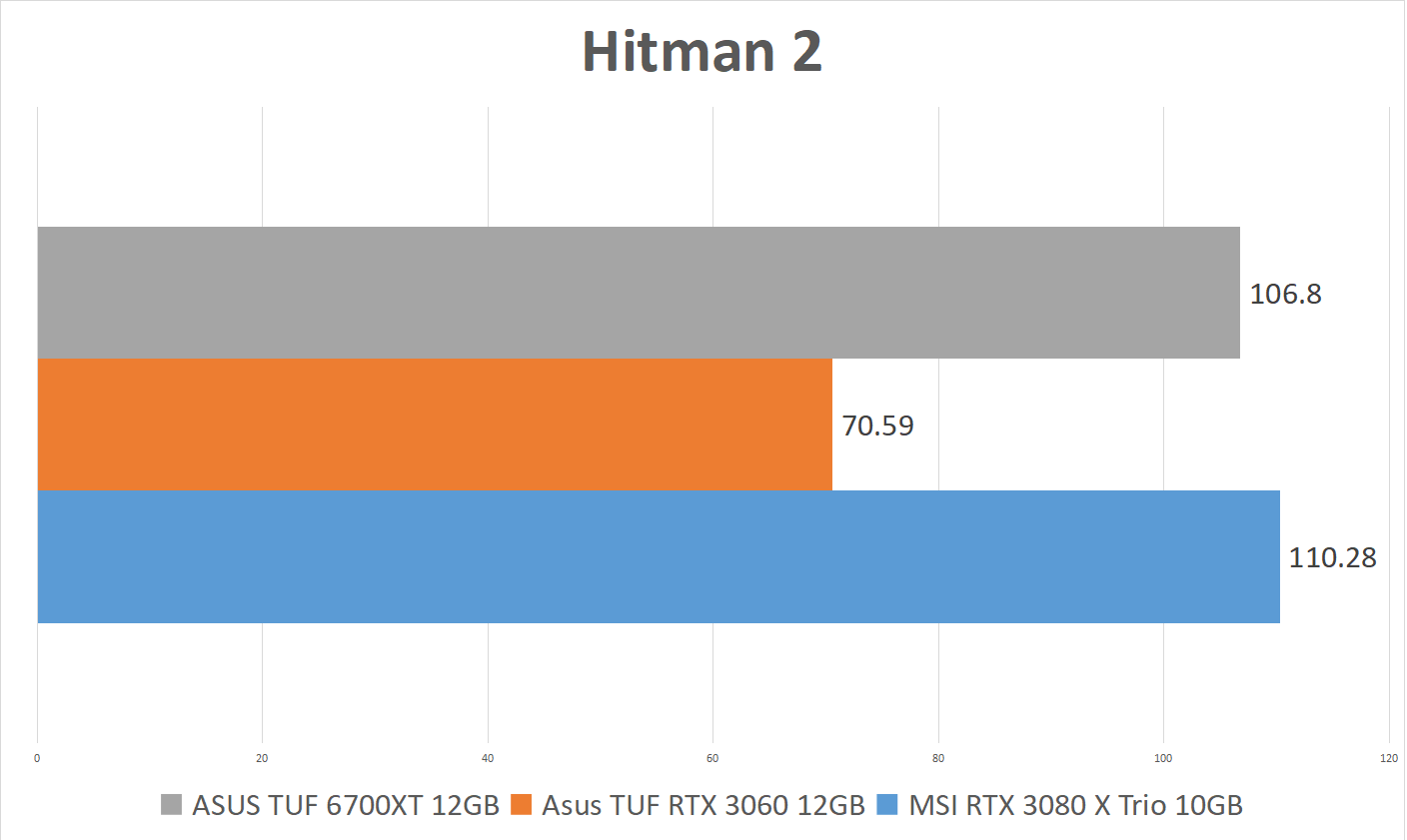 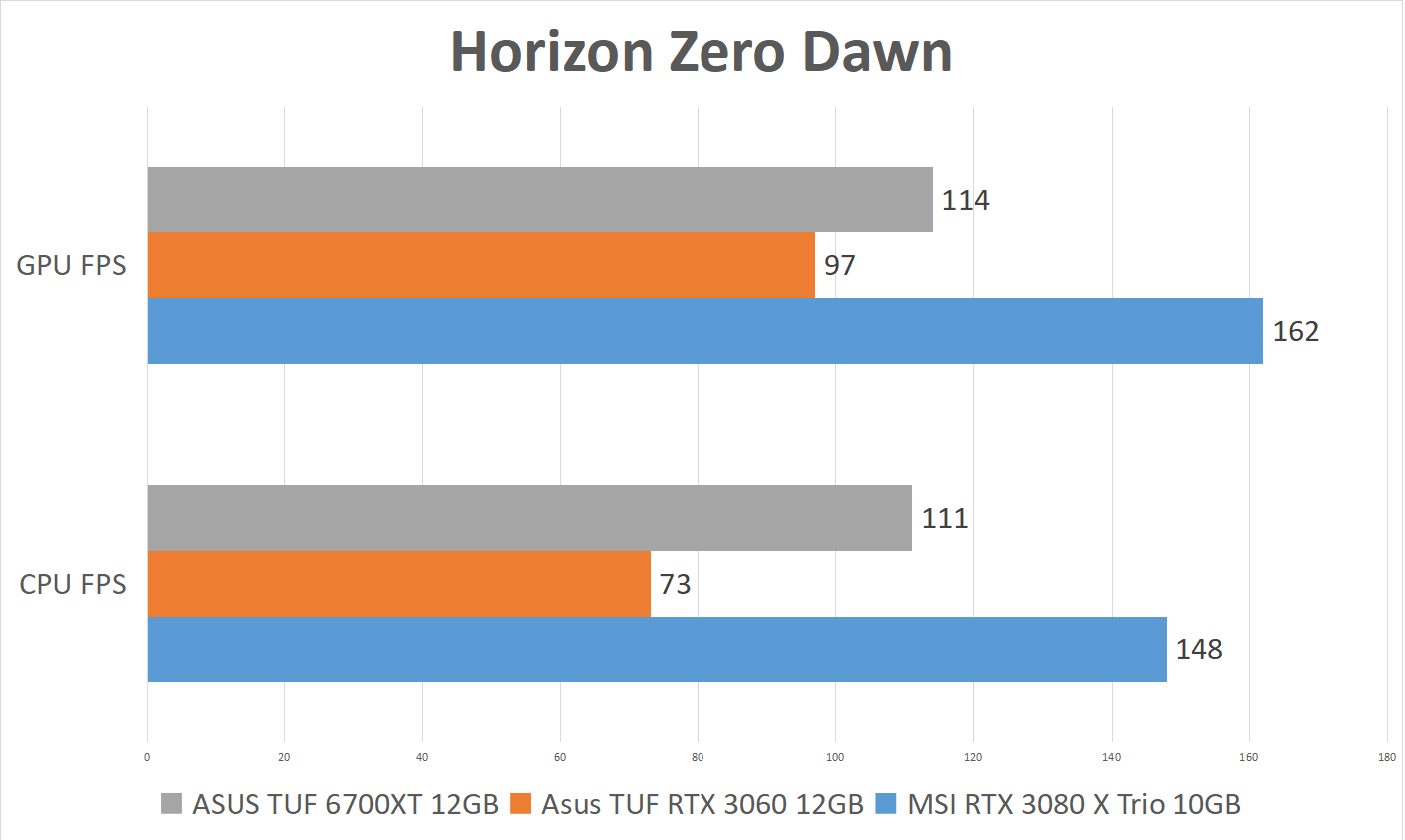 In Horizon Zero Dawn, it’s only slightly faster than 3060, while still much slower than 3080. 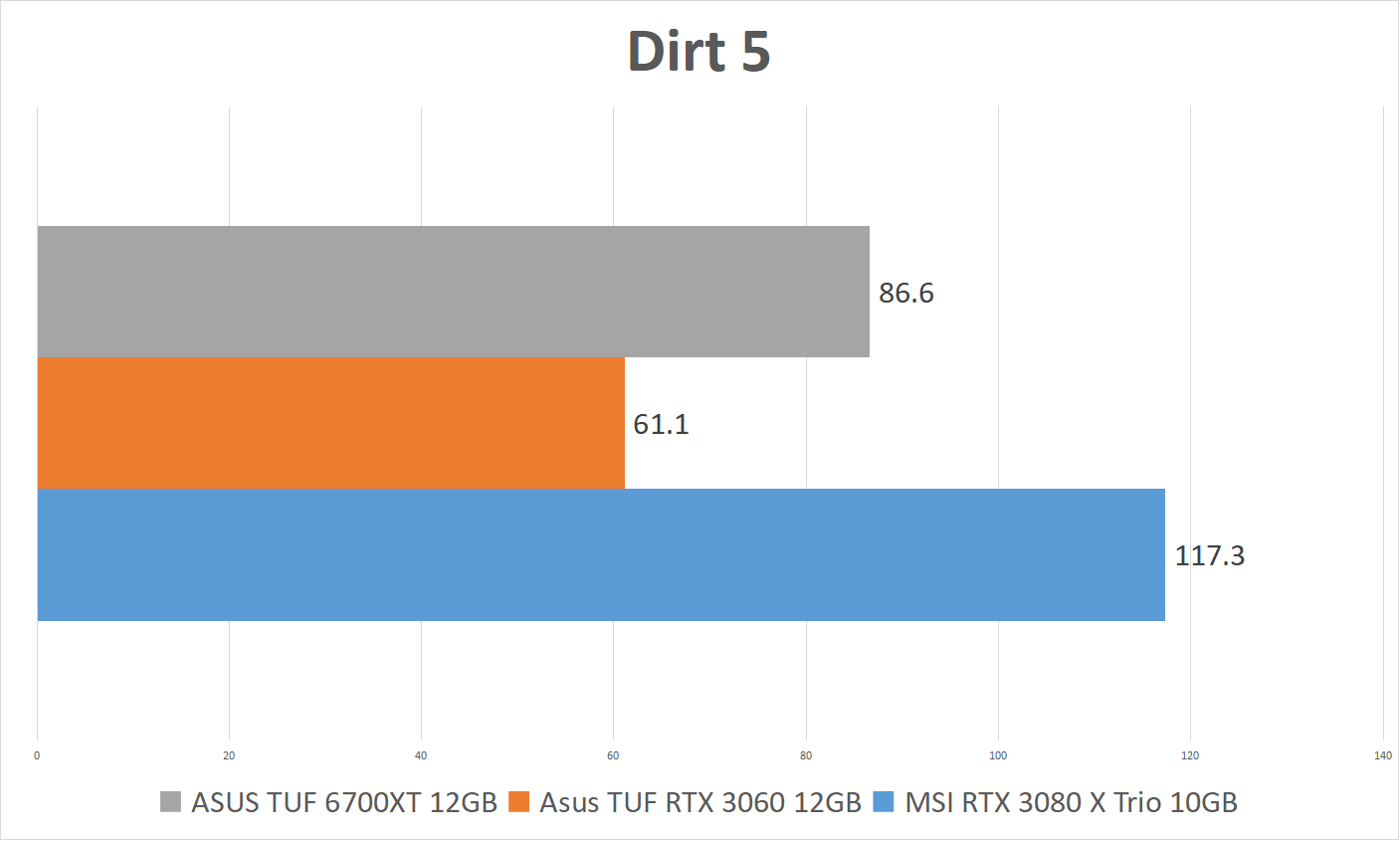 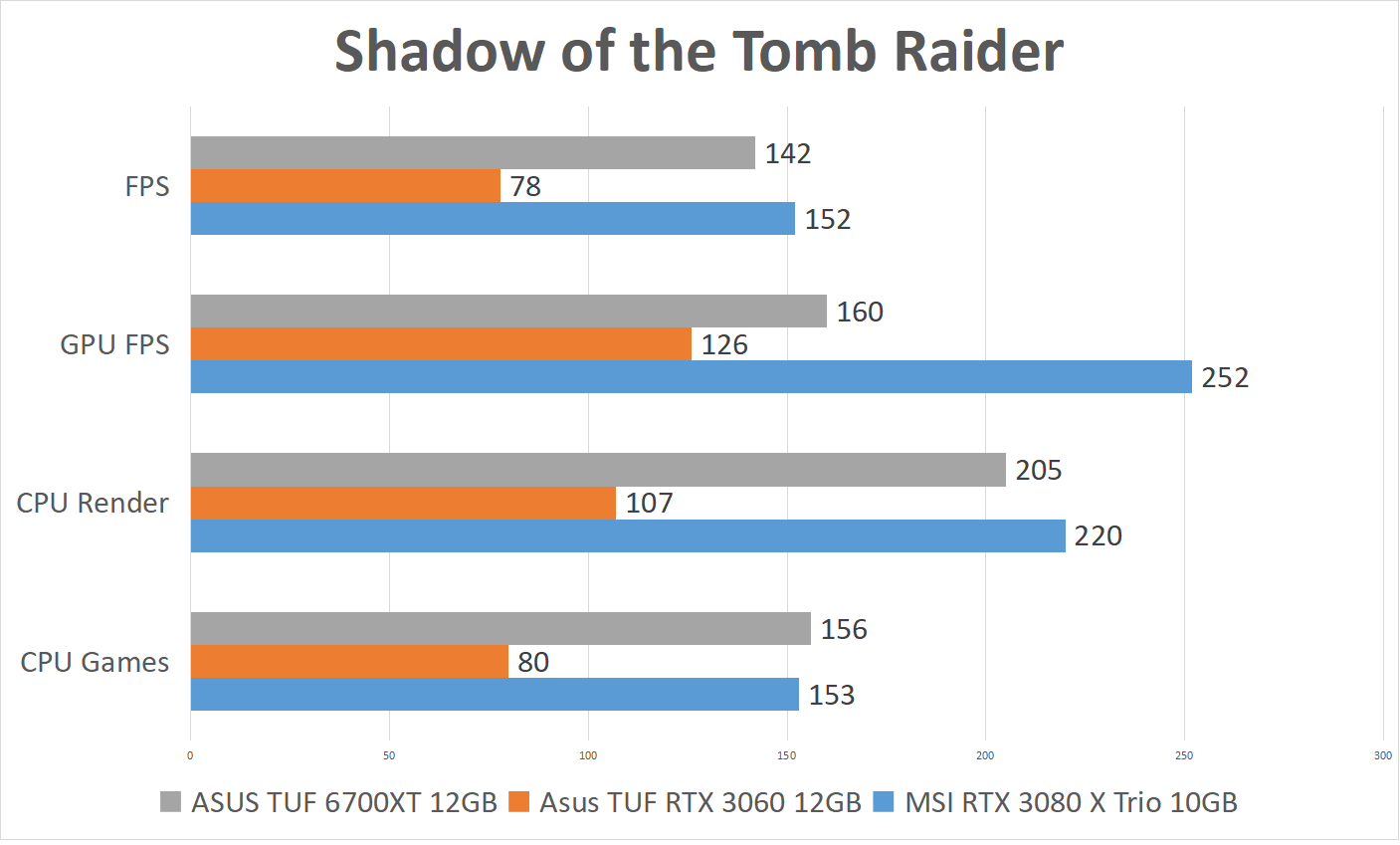 In Shadow of the Tomb Raider, it almost doubles the FPS of 3060 and being only slightly slower than 3080. 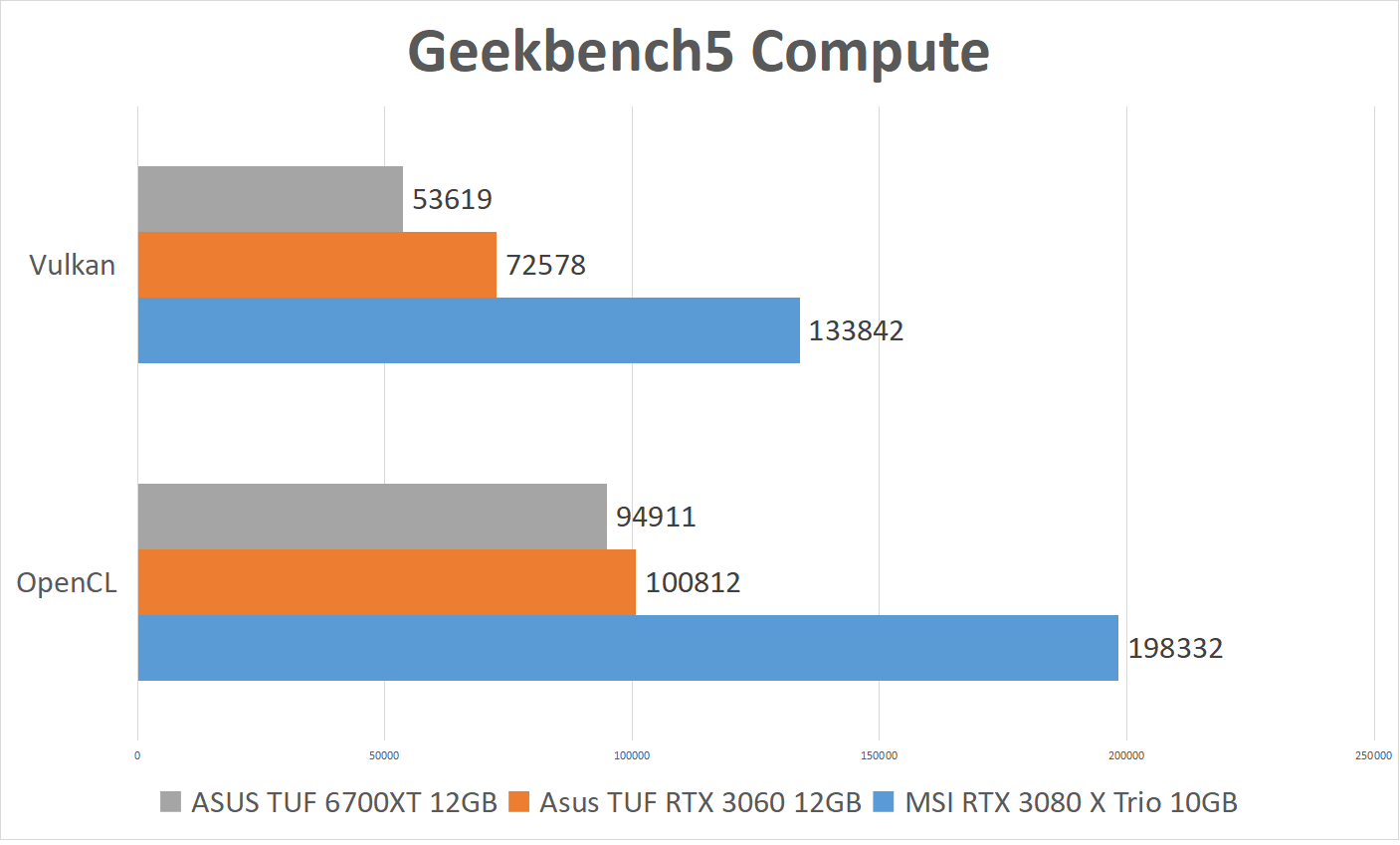 In the compute benchmark however, Nvidia is still having a lead. It is slower than 3060 in both Vulkan and OpenCL, and less than half of the performance of 3080.

So these scores looks alright for a $479 card. But being a $799 card, what are you getting for the extra $320? A better cooler, for sure. If we take a look at the temp here, it is even running cooler than the Strix. Disclaimer, all other 6700XT model temps are from the review of Techpowerup. They did not specify their testing condition, but it shouldn’t make too big of a difference unless under extreme conditions. Yes the TUF has a great cooler, we already know that. Other TUF models has all been praised for their excellent temperature. 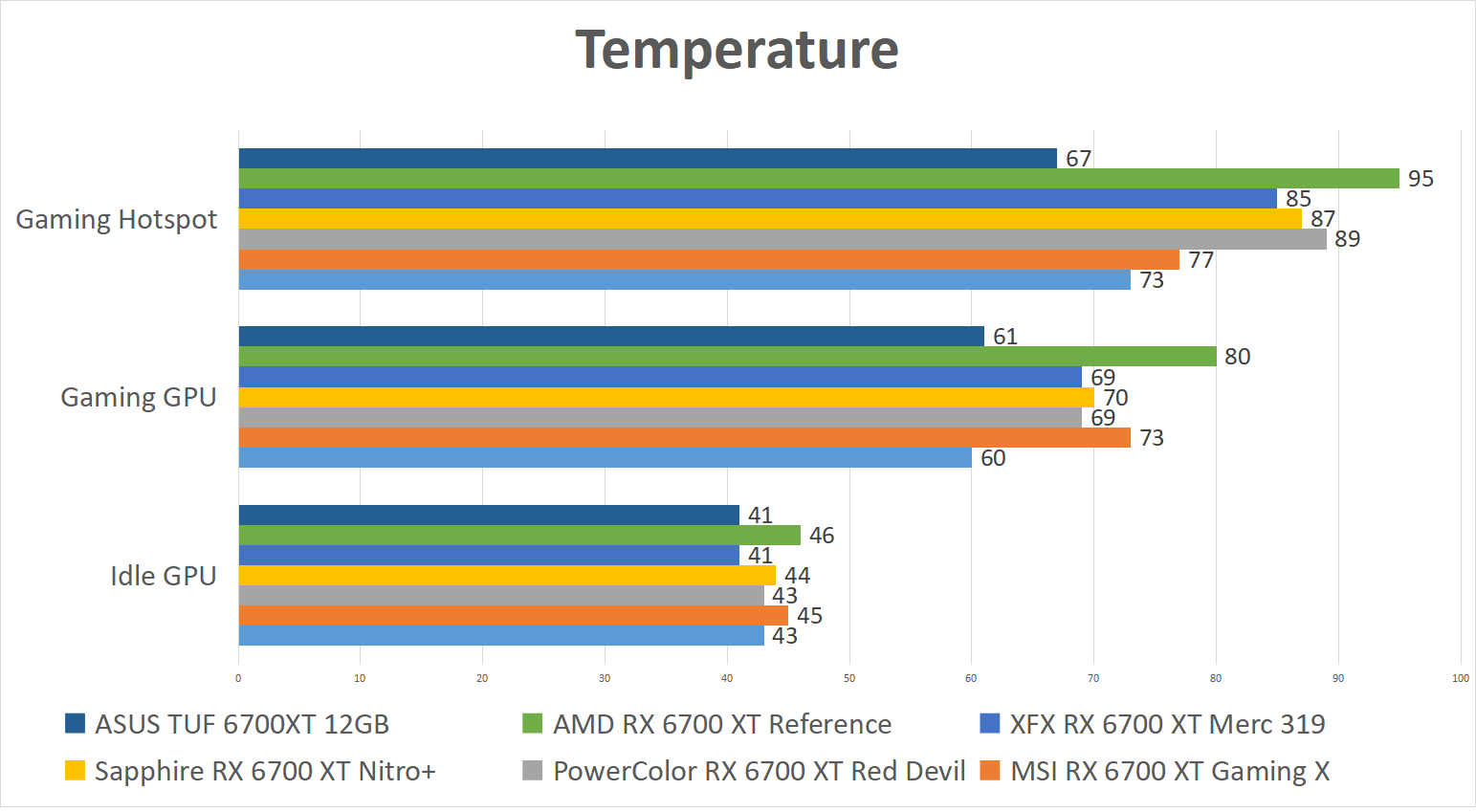 Now what about overclocking? After some tests, we are able to get it to 2815MHz core and 2150MHz memory. That is about 200MHz higher than what a reference card can get, and very close to Techpowerup’s 6700XT strix’s result. With the overclocking, here is the increase we get. 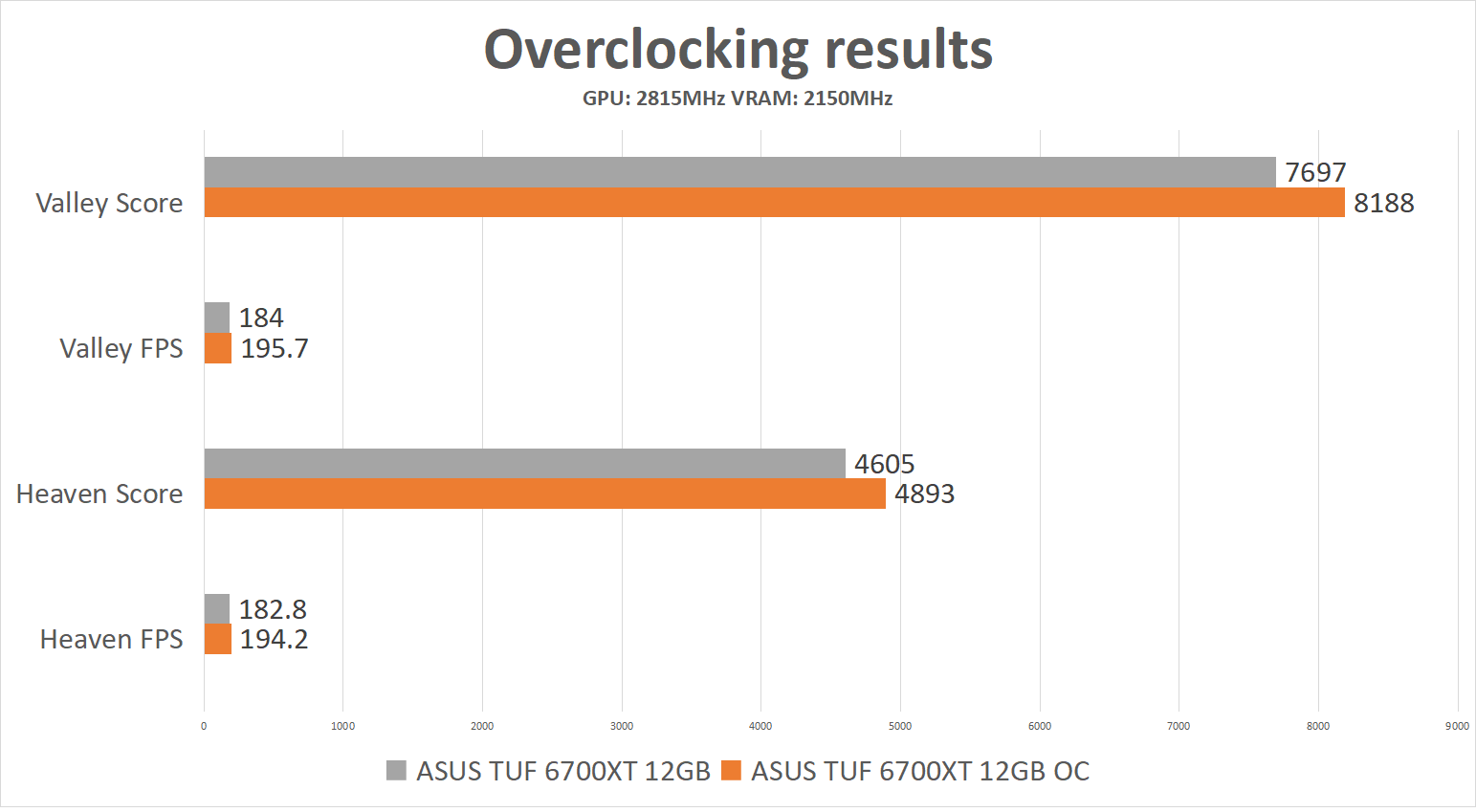 We are getting 6% increase in both Unigine Valley and Heaven. Again in my opinion there is no real point of overclocking video cards nowadays for gaming purposes. If it can’t run a game smoothly then it won’t be smooth even if you overclock it. If it runs a game at 100fps, then overclocking to make it 110FPS won’t give you too much of a noticable difference. It is really more for fun and benchmarking. If you are spending more money on expensive models for better cooler and better RGB, go ahead. But if you are spending the money solely to expect better overclocking, then I would say save a little more money and just go one SKU up. Even if you overclock the hell out of a 3060, it is still not gonna be as fast as a 3060ti. But if we talk about MSRP, many high end 3060 has higher MSRP than low end 3060ti. 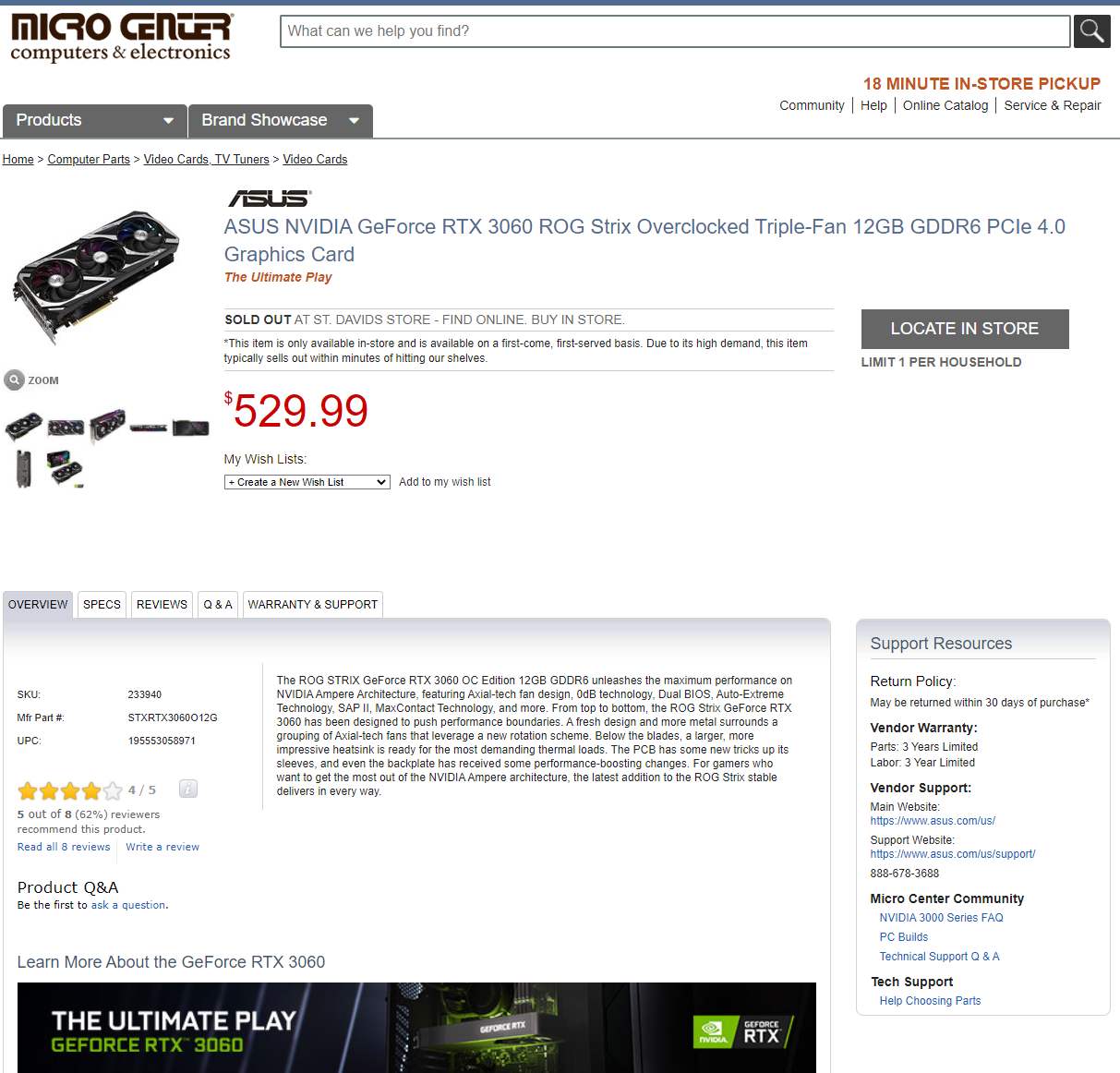 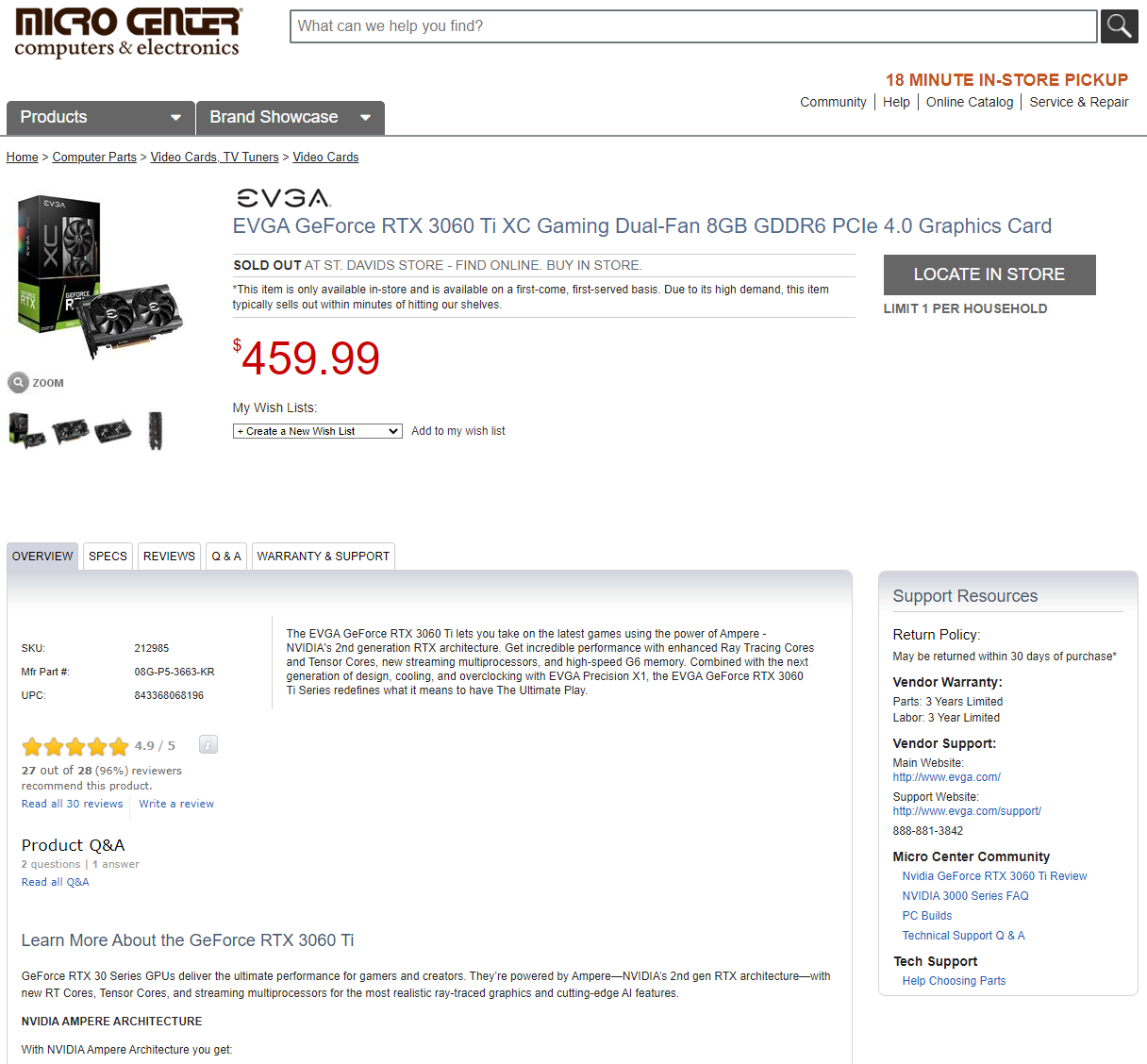 So the TUF 6700XT is definitely one of the best 6700XT ‘available’ on the market. But for $320 more, should you buy it? I’m not sure. Yeah I know, RTX 3070 and 3080 are being sold way over Nvidia’s MSRP as well. But again, it will be pointless to discuss the value of a card based on their inflated price right now. Nothing is worth buying at the price they are being sold for on eBay. But just assume the $479 6700XT actually exists, I would say it will probably be a better idea just to buy the reference model instead.

That’s it for today’s review. Thanks for reading! You can watch a video version of the review here:

Awesome review! Thanks for posting it!
S

Great job. Thank you for your effort.