after some testing back and forth and a day or so of testing different combinations of vccsa/vccio/vdimm and different timings and frequencies,
i'm now running the kit at 3600mhz 16-17-17-38 with 1.15v on both vccsa and vccio and 1.4v on the vdimm, ran memtest up to 400% coverage and called it a day for stability testing,


I haven't touched tertiary timings at all and just slightly tightened the secondaries thus far after looking at some guides, anyway at lower frequencies than 3600 with tighter timings,
or higher frequencies with looser timings, it seems I always sooner or later eventually run into errors in memtest or BSODs, depending on the oc of course, but havent really gone that deep into timings yet I think,


just wondering if this oc is decent-good-average for this kit on a z390 cheap motherboard in general, should I continue or be happy with this?

got some decent (?) gains vs the xmp profile in aida64 anyway, but IDK how good these numbers are compared to what I could get with better timings on that frequency,
or tighter timings at slightly lower frequency perhaps: 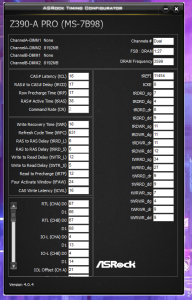 
if anyone sees any obvious subtimings I could tighten up easily or something let me know, and yeah, should I just be happy here and call it a day?

Thats a solid oc. If your happy with perfomance call it a day...if not keep pushing. Its your rig afterall.

Yes. Unless a you care about is chasing bench mark numbers you will not notice a difference. Especially on a Intel platform.
A

thanks for the answers! all good then
A

What do you use the system for? If for gaming you’ll be hard pressed to ever tell the difference in real world use.
D

Have you tried 1T?

I wouldn't worry about tertiarys unless you are getting instability issues from the MB setting them wrong if so just lock them to current settings.

You may be able to set ~30000+ tREFI but if this is unstable it wont show up in a stress test but with crashes during idle usage.

Archaea said:
What do you use the system for? If for gaming you’ll be hard pressed to ever tell the difference in real world use.
Click to expand...

well for gaming mostly yes! but I was under the impression that in my choice of gaming, which is competitive gaming with lowest quality settings to reach 240+ fps,
higher memory speeds / tighter timings could potentially boost perf from decent to a lot, but seems to depend on game/engine quite a bit too..

from what I saw in some ddr4 scaling benchmarks at least things like minimum and 0.1% fps and even average/max fps numbers could benefit from slightly to pretty substantial when tweaking memory?


I haven't benchmarked my games though with the OC since for example in fortnite, my main game of choice, there is no ingame benchmark with consistent scenario for testing,
but in the end I just wanted to achieve a decent to good OC on my ram to sleep better at night Lol! if that makes sense


so like a week ago I was running stock cpu/ram/gpu settings, and did so for the past months since I got my current system, but now after OCing cpu to 5ghz from 4.6 stock, ram to 3600 cl16 from 3000 cl15,
and +1000 mhz on the gpu memory (msi gaming z 2060) the system does feel slightly more responsive and snappy with less scenarios of stutters and hitching, just kind of feels a bit more fluid, nothing extreme in terms of
percieved difference but slightly better in my subjective experience ! maybe placebo maybe not


dasa said:
Looks like you have them tweaked down fairly tight for e die

Have you tried 1T?

I wouldn't worry about tertiarys unless you are getting instability issues from the MB setting them wrong if so just lock them to current settings.

You may be able to set ~30000+ tREFI but if this is unstable it wont show up in a stress test but with crashes during idle usage.

hello, I did try 1T but that was immediately unstable even at lower frequencies, even at XMP profile if I recall correctly

and latency was very close in aida64 to my current oc , so I just went with this current OC instead of further tweaking, felt like a somewhat "sweet spot" in terms of performance and voltages for daily use, IDK.

the read/write/copy tests were a bit better though than now with 4000mhz cl18:


but latency was same-ish around 45ns so I stepped down again to this stable oc with lower vccsa/vccio/vdimm..


think at some point I will just buy some high rated kit instead, was looking at G skills 2x8 gb 4400 mhz trident Z royal CL18-19-19-39 1.40V kit today and looked pretty nice to me, any thoughts on that?
think it would be possible to get that kit and tweak it down to like cl 16-17 ? and would there be any point for me? (mostly use pc for gaming, but only cpu-bound gaming at 240+ fps with low quality settings,
where tweaking memory *should* be beneficial? as far as I know ?)


cheers and thanks for the tips on the timings, if I decide to continue tweaking this crucial memory kit I will use your post as guideline
Last edited: Mar 5, 2020
D

at least that is what I saw in some buildzoid video on his actually hardcore overclocking youtube channel :S

Seems you are right older Intel CPU could set them separately but newer models can not.

This guide suggests tRAS = tCL + tRCD(RD) + 2 so 17-20-20 would be tRAS 39 although I don't think that it really makes that much difference 39 vs 40.
https://github.com/integralfx/MemTestHelper/blob/master/DDR4 OC Guide.md#finding-the-maximum-frequency
W

That seems really good to me but I’m on a Ryzen platform with hynix DJR chips that I had to add voltage to just to reach the rated 3600mhz
You must log in or register to reply here.
Share:
Reddit Pinterest Tumblr WhatsApp Email Share Link
Top