I have a couple of rigs with EVGA GPUs in the and they are not all performing the same despite being identical models (most are FTW3s) and using the same clock profiles.

And then I got this rig that has all LHR EVGA cards in it:

Anyone tried letting Precision X1 loose on a rig like this to update the firmware on all the GPUs?

The safe thing to do would be to take out one card at a time and stick in a rig by itself and let X1 do its thing, but that would be a real pain.
X

Not the bios its just silicon lottery, look at the core clocks. Try using core locking with t-rex and youl get all the same hashrate, but power will fluctuate between cards a little bit.
P

So I added this to my T-Rex call:

So a nice bump on all 3 3080Ti's. However, that one on the bottom (brand new that just arrived today), is still lacking behind the others.

Btw, I didn't mess with my GPU clocking profile for the 3080Ti's on Kawpow, it still looks like this: 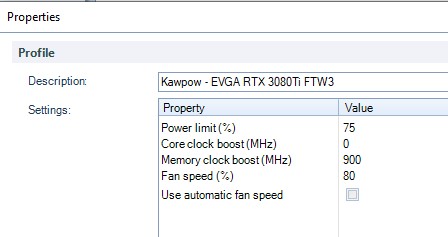 I wonder if I should change that now that I'm playing with core lock?

The reason I brought up updating the Firmware/BIOS in the first place, is that I also have another rig with a 3080Ti Hybrid in it, and it benefitted greatly from letting Precision X1 update the firmware as there was a know issue with limiting max power with the initial firmware/bios that shipped on the card (EVGA 3080Ti XC3 Hybrid).
X

The bios updates probably wouldn't hurt I guess, if you wanted to give that a shot. Ive got a few lhr evga 3060ti's I might try that on, now that you bring it up actually.

Edit: All of your 3080ti's are actually hitting the 300w PL and cant set 1200mhz core, so again you just have to bump the PL or drop the locked core value. If you just want a static hashrate value, core lock works well, otherwise you're at the mercy of the voltage curve/silicon lottery and power limit of whatever you set.

Edit 2: You can also try your original settings, no core lock and 300w PL, but with a 100-200 core offset. Youre leaving some hashrate on the table running 0 core offset with a PL. Note that running a core offset with core lock does nothing though. And once you lock it, you usually have to reset/reboot to clear the locked core setting/value if you want to go back to using a PL/offset.
Last edited: Sep 13, 2021
P

But that last one sure is power hungry at 1200 core! I'll play around locked core clock to see where the sweet spot is for efficiency. Patrik is adding a 3rd row to the Performance column to show efficiency in the next release. So that will make tuning easier on a per GPU basis unless you look at the miner console.
M

I loaded precision on a rig with a xc3 3070 and an asus. I was only doing it to disable the rgb but it immedietly updated firmware. No issues. Actually i think i did that on two similar rigs
X

But that last one sure is power hungry at 1200 core! I'll play around locked core clock to see where the sweet spot is for efficiency. Patrik is adding a 3rd row to the Performance column to show efficiency in the next release. So that will make tuning easier on a per GPU basis unless you look at the miner console.
Click to expand...

Very nice that's definitely cookin' now. Yeah that last card is pretty power hungry, but that's just how ampere cards can be. My 60ti's vary by like ~25w on eth, I think those samsung 8nm chips have a lot of quality variance in them... If you have the time it would probably be worth a quick reboot and testing the 300w PL again, but with a +100 or +150 core offset. You might get better efficiency instead of just locking the core, and running that one card at 330w (spicy!). If you reeeeally want to get crazy, you can also play with voltage curves in msi afterburner to shave even more power off.
P

I went ahead and installed Precision X1 on my rig with all the EVGA LHR cards. Sure enough, as soon as I launched for the first time, I got this popup: 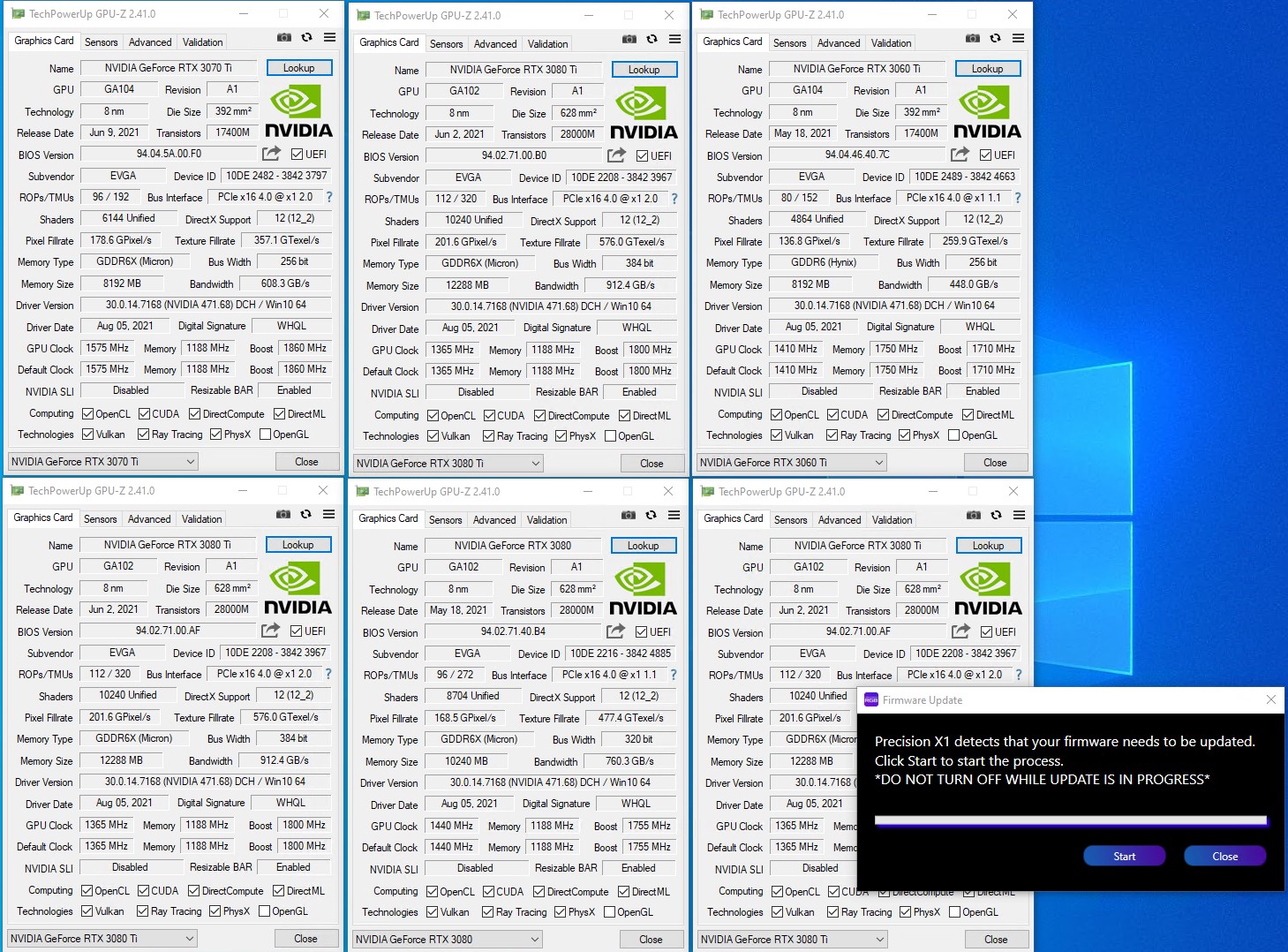 And after it was done with the first card, I got this: 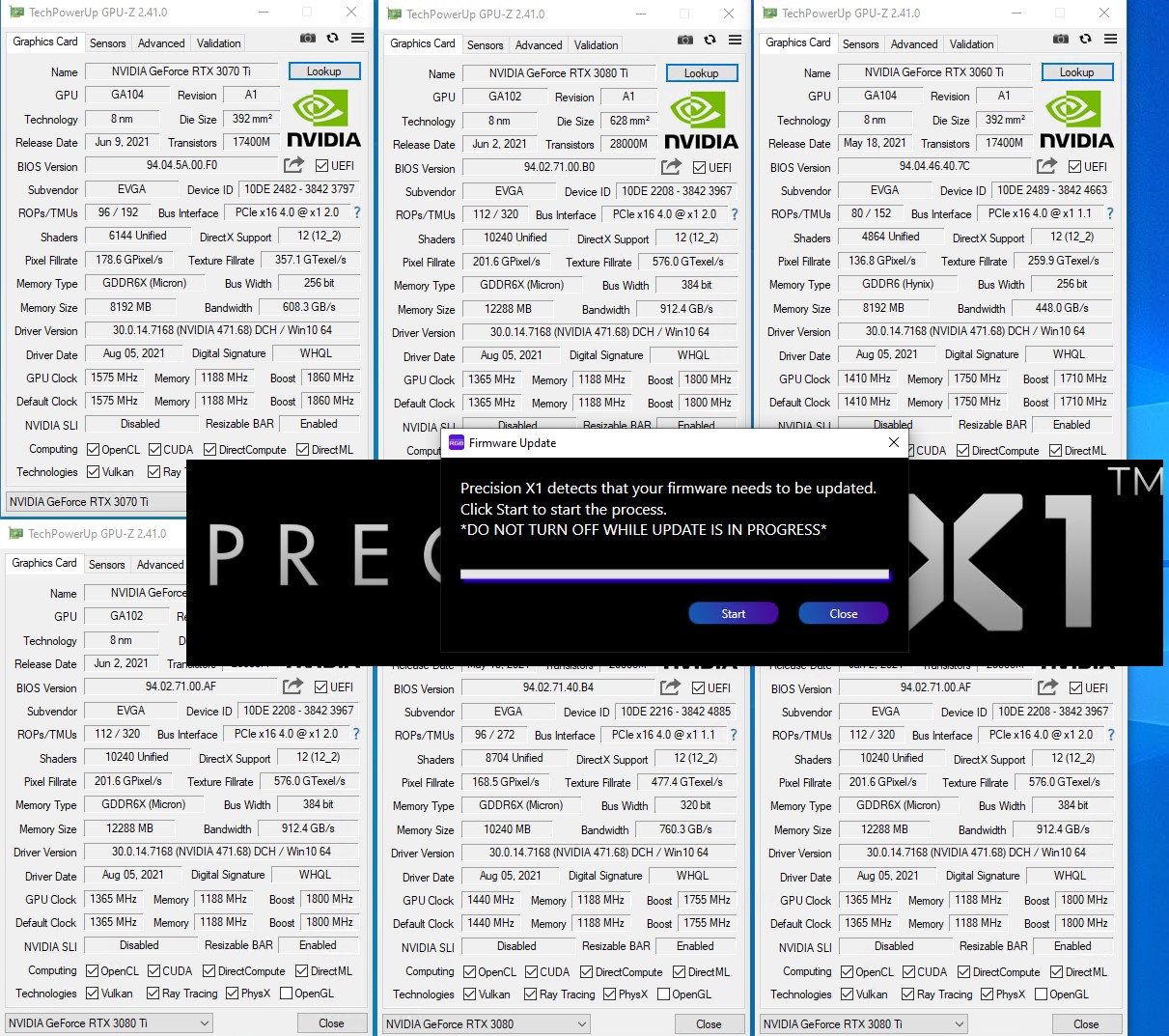 That repeated a total of 3 times (so 4 cards were updated). And then Precision X closed down. I relaunched, and it again told my firmware needed to be updates, so I let it do the 5th GPU. It never asked me for the 6th GPU, so it mush have already been on the latest version.

Anyway, all hash rates and power levels remained the same after the update.

xenium I use Awesome Miner to control clocks and power levels. I don't even have Afterburner installed on that rig. Anyway, I did set the PL to 300 watts (75%) on that last card and played with the core clock, but could not get it past 50.5 MH/s.
X

Interesting, well it did at least bring that 80ti from 49.59mh to 50.5mh by adding a positive offset. Seeing your current solar setup and "basically" free power, it's probably just best/easiest to lock the core and let the power fall where it wants.

Afterburner might actually cause some conflicting issues with the way awesome miner sets OC's. Im not familiar with that at all though, I haven't used windows for mining since 2018. AFAIK there isn't any other program that can handle voltage control unfortunately, and it's not available at all under linux. Its a bit tedious, but can shave at least 10w per card if you really wanted to bother (again, probably not likely with your electrical rate).
Last edited: Sep 15, 2021
P

I hear you on running Windows as the OS for mining. It can be a real pain. I do have some rigs running Ubuntu (mostly my AMD rigs) since there's a Awesome Miner client for both Windows and Linux. I'll probably switch back to all Ubuntu at some point, but updating drivers and dealing with xorg.conf can be a real pain too. Been thinking of going back to HiveOS as well, which I use to run on everything. On my AMD rigs on Ubuntu, I have Awesome Miner launch a script on startup that sets the core clock and memory. Like with the new T-Rex option that locks core, that kind of dictates the voltage as well.

Sample script that I call:

Very cool, I didn't realize awesome miner also had a linux client. Yeah Im a big proponent of a dedicated linux mining OS, but hey "if it ain't broke don't fix it" type of deal. That's exactly why I much prefer a dedicated mining OS though (driver/xorg issues, etc). Ill gladly throw a few bucks a month to let someone else handle the backend dev work, so I can focus on tuning/monitor rigs via a GUI. You just cant beat it for deployment either, flash a USB and you can have a rig hashing within a couple minutes.

Yeah, I have a base Ubuntu 20.04 image that I drop on a small SSD (like 60Gb) and after the first boot, I just change the host name, reboot and tell add that host to Awesome Miner, and away I mine. With the newer 3000 series Nvidia cards, I get better performance with the latest drivers on Windows than the drivers that are part of base Ubuntu image. I might look at switching those rigs (with the 3000 GPUs) back to Ubuntu at some point. Also, Ubuntu does not show the memory temp on Nvidia cards, which is one of the main reasons I switched to Windows with the 3000 series. It was quite an eye opener to see the memory temp on my 3090's and even my 3080's. So I added heatsinks to the back plates on the 3090's and set the fans higher on the 3080's, which got them in check.

Btw, the power readings above is after adding 35% to account for the power used for the rest of the card (memory, fans, etc).

Here's the raw console output from the miner: 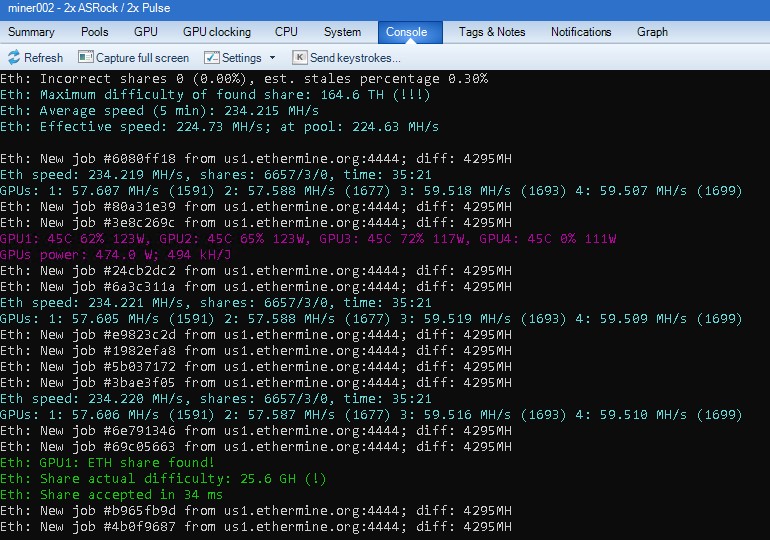