nVidia, you are cancer. Competition will be the cure, if it ever comes.

lucidrenegade said:
Can't wait to see the Vega vs 2080ti charts in the [H] review.
Click to expand...

And my AMD stock is shooting up in value as we speak. The irony...
M

Curved mirrors - it just works.
I

Some of it's no competition, some of it is going to be them missing the opportunity over the mining craze boom. Then were not the ones to benefit from the price gouging so they want some of that action.

I'm back in the US at the end of November, new games will be out by then so I'll see what the deal is. Being overseas, paying sales gax and the currency conversion is just not worth it for me ATM.

fs123 said:
Where are those who want AMD to die? Can you see now why competition is needed?
Click to expand...

I'm honestly laughing at this announcement, since there's not even any subtlety to it. And this is with AMD still nipping at their heels a little bit, just simply unable to overtake them. Imagine what the prices would look like in a couple generations where there wasn't even realistic lesser competition.
E

Meh for $2.5k$ I'll pickup 10 x 1080 ti on the secondary market. Looking forward to the [H] review and congrats all you early adopters.

Well at least I know why they wanted a stranglehold on the review media. Unless performance is double for each tier those prices are nuts and they would deserved to be panned by the media for it.
I

Kyle, would it be out of bounds to ask what the [H] opinion is on these prices? Not sure if anyone has already asked or not.
R

hmm, PErsonally a bit shocked at first, but upon taking a second, I can see how you wind up there.

For a tick rather than a tock, we';d expect a 2080 at about $700 and change until wide availability dropped street price from MSRP. IF they also told us they were dropping the TITAN whatever version at $1100 plus, we probably wouldn't freak out over that either.

The only thing making us freak out a bit is one the ti part is being released on the tick. From nvidia's seat this may just look like a name change and a $100 price increase.

Got a 1080. Think I'll sit this one out until prices reach something resembling sanity.
K

Wow. When I was a college student, I would save up what I could to get the latest and greatest card each generation.. and it made sense since I played a lot of games. But if I were in college today and saw a $1200 price tag on a card.. I'd probably have to pass. Today (many years after college), I have much more disposable income, but much less time to play games. At the $800-1200 price point, I find it hard to justify. I wouldn't say I'm overly frugal by any means... but there are some things that no matter what the price is I can't justify buying because I know I'm being ripped the F off.

I really just feel sorry for my kids since they are still rocking the GTX 660.

If anything, this will push me to AMD.
B 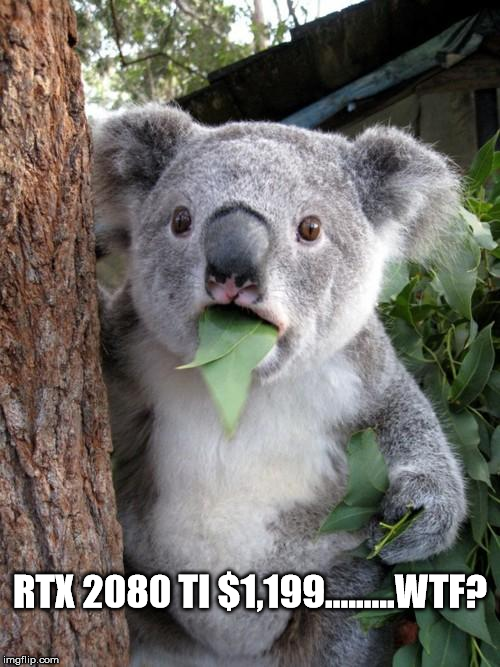 What really gets me is the price bump to the 70 series. 600 bucks for a 2070... There better be some MAGICAL reviews of these cards on the [H] to justify that cost. Or I'm just going to wait until I need it for performance at 1440p.
A

For these prices, I'm just gonna hold out for whatever AMD puts out next year. I have a Freesync monitor with a pretty decent range, so I'll settle for less and use the feature. I don't play twitch games anyway, so no biggie not having 100+ fps
N

Huh, the stream just called out "starting at $499" for the RTX 2070. Could be the Founder Editions are bumped up in pricing like last time.

prices are starting at 499 from nvidia actually
N

Chuckle , they got many of you to scream about the pricing before the real prices came out.

I think he forgot to add "... in ray tracing operations" doubt its in every regular games though.
D

Cancel my order for the 2 Founders Edition Ti's I wish to just have a plain Tis for $400 less please.
G

Oh yea I'm rolling laughing on the floor. Actually no I'm not. I'm still now more critical than ever at the cards coming out and the prices for them.
H

Remember when $500 was for the high end of the generation of cards? This is such a joke.

GoldenTiger said:
Huh, the stream just called out "starting at $499" for the RTX 2070. Could be the Founder Editions are bumped up in pricing like last time.

gxp500 said:
I think he forgot to add "... in ray tracing operations" doubt its in every regular games though.
Click to expand...

Perhaps. He called it out specifically earlier on as to ray tracing vs. normal perf. It would also be in-line with previous gens where the xx70 was equal to or faster than the xx80ti of the prior gen. (GTX 970 compared well with the 780Ti, and the 1070 did with the 980ti).

Dahkoht said:
Chuckle , they got many of you to scream about the pricing before the real prices came out.

MSRP vs. selling price, though. Like the inflated prices from mining, until I can get it as MSRP or below (I always buy on sale for under MSRP... I'm cheap) I won't be buying one.
Q

Does anyone care about ray tracing considering it costs an extra few hundred on each card?
B