The stock 140mm fans on my Corsair H110i GT are starting to drive me nuts, they are loud when having high load but now it's worse that one of them has a rattle, which means time for new ones!

What are the highest CFM fans that will quiet this sucker down?

Not to be that guy, but for a radiator you're gonna want to buy the fan with the best static pressure, not CFM.

That said, what kind of price range are you comfortable with?

$50? I figure a good fan is about $20 a pop. Looks don't matter since no one is going to see them either. it's currently being used as a pull setup on top of my Corsair 750D

I've used and really like Corsair's ML series fans for radiators. They use magnetic levitation bearings. Two-packs of the non-flashy version can be had for about $40.

One thing to note, they require 4-pin PWM.

EK Vardars are well-reviewed, too - I've never used them before.

Love my Fractal Venturis, but the MLs are cheaper, Noctua makes some good ones too...

I'm using the Corsair ML140 pros (got them for $23 each). They start to get loud at about 1100 RPM with the Fractal R5 case door in front of them restricting airflow. On a heatsink, I seem to be able to run them past 1200 RPM without it being annoying.

I'm wondering if I would have been better served by the BeQuiet Silent Wings 3, as that's geared more toward silence, but I think the static pressure may be slightly lower. The only other fan I was considering was the 29mm thick Noiseblocker NB eloop B14-ps, but it was considerably more expensive.

If Noctua can release a 140mm Sterrox fan (like their new $30 120mm fan - initial reviews look very good) - then I think I'd pay the premium to try that, but I think it'll be 2019 before that releases.

After all of that, I still like my 120mm Gentle Typhoons... I think I got a good batch, because they've not exhibited any annoying bearing noise unless placed too close to an obstruction (but in that situation, my Corsair ML fans are affected worse).

I'm looking to not really lose cooling, would love to gain some if possible. I hit as high as 75C when encoding and would love to keep it down a bit more. Or should I just upgrade my watercooler at this point since I might be asking the impossible.

how do you have it configured, like placement and fan position?

Old image (when I built this computer in early 2016), Instead of SLI, I have a Raid card with 6 hard drives on the front of the case. Fan setup as pulls for the radiator, back exhaust and the two front ones are intakes. 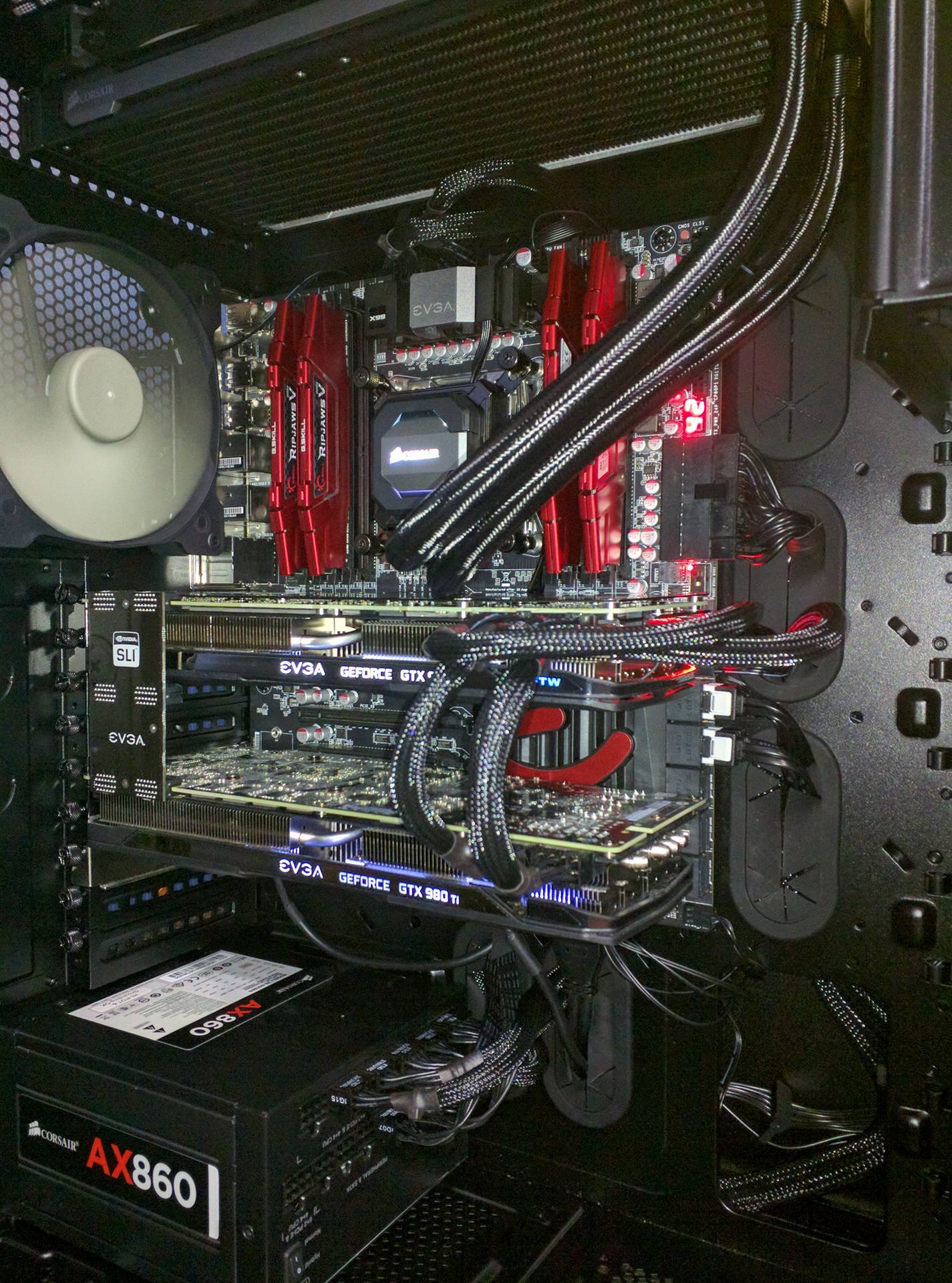 the way you have it set up it is sucking warm air from in the case through the rad, so your temps will be higher. try flipping the fans on the rad. I would say to try front mounting it but unless you can remove the 5.25 bays and put it there it will be too low and you will get gurgling in the pump. is there room under your raid card to add an exhaust fan blowing out the pci slots?

Sadly up front isn't an option. The hoses would be too short and lower then the pump as well. 5.25 bays are not removable as well.

Could try to flip the fans but either way need fans lol. Too bad they don't make a 420mm setup unless it's a custom loop. I plan on getting on picking up a 5960x in the future to upgrade but not sure if this system is going to be enough come to think of it.

To mirror others, I always got my best temperatures with a radiator pulling fresh air into the case. The rad will warm the incoming air a bit, but not so much that your other components will suffer greatly, assuming adequate exhaust path. You'll be working against convection bringing air in through the top, but again, a minor issue if you've got other fans helping along.

Personally with that setup, I'd pull air in through the top rad and mount one rear fan as an intake as well, with two exhausting out the front. Having a higher intake flow than exhaust flow will also help minimize dust accumulation inside the case.

You could also make that rear an intake, pulling fresh air into the exuast path of the radiator. They make magnetic filters if you are concerned about dust.

Archmage said:
I'm wondering if I would have been better served by the BeQuiet Silent Wings 3, as that's geared more toward silence, but I think the static pressure may be slightly lower.
Click to expand...

I'm using 140mls as rad fans and have the SW3 as case fans. Imo at high speed both are about the same, but at medium(50%-60%) the SW3 can be heard over the mls. To be a bit more specific; at high/max speed with the mls I can hear more of the air 'wooshing' through the fan compaired to the sw3, but I can hear more of the motor/hum/blades/vibration on the sw3. So neither are silent, they just make a different sound. At medium, I can't tell if the mls are on/working but I can hear a very faint 'hum' on the sw3. Anything less then 50%(medium) both are completely silent.

For reference, my case sits on the desk and is about 2ft away from me. The case came with 3x 140 sw3 and I bought the mls to replace the nzxt fans of the kraken x62. I also don't sleep in the same room as my pc so the slight hum of the sw3@med speed isn't an issue for me. That noise gets drowned out by pretty much everything (like typing on the keyboard.)
M

Think adding another set of fans as a push and pull would help keep the temps and noise down?

My logic would be I could get slower fans but having 4 fans could make up for the lost of not having high speed fans.

LOCO LAPTOP said:
Think adding another set of fans as a push and pull would help keep the temps and noise down?

My logic would be I could get slower fans but having 4 fans could make up for the lost of not having high speed fans.
Click to expand...