This thing is pulling triple-duty as an HTPC, file server, and torrent box. 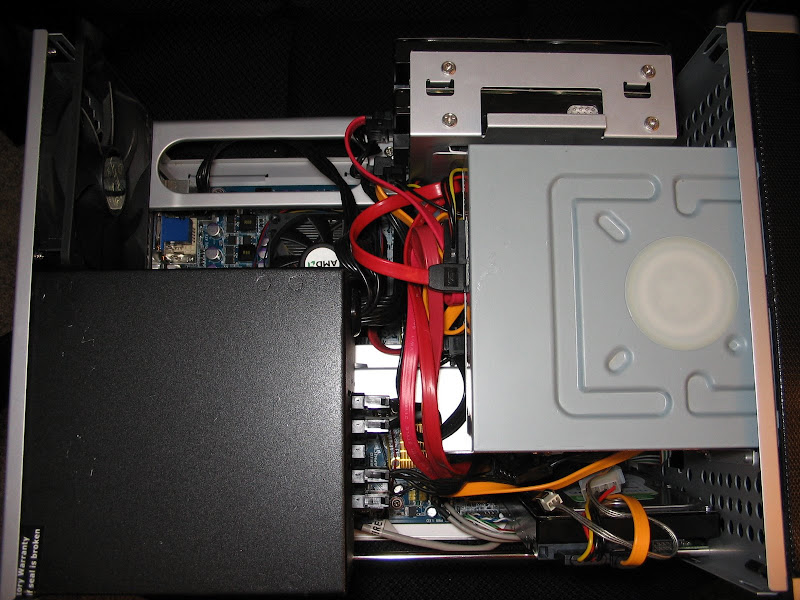 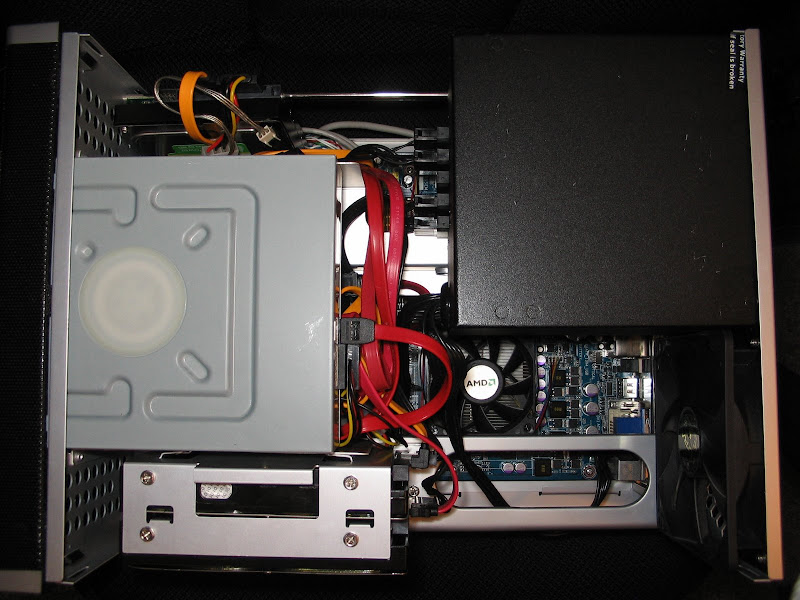 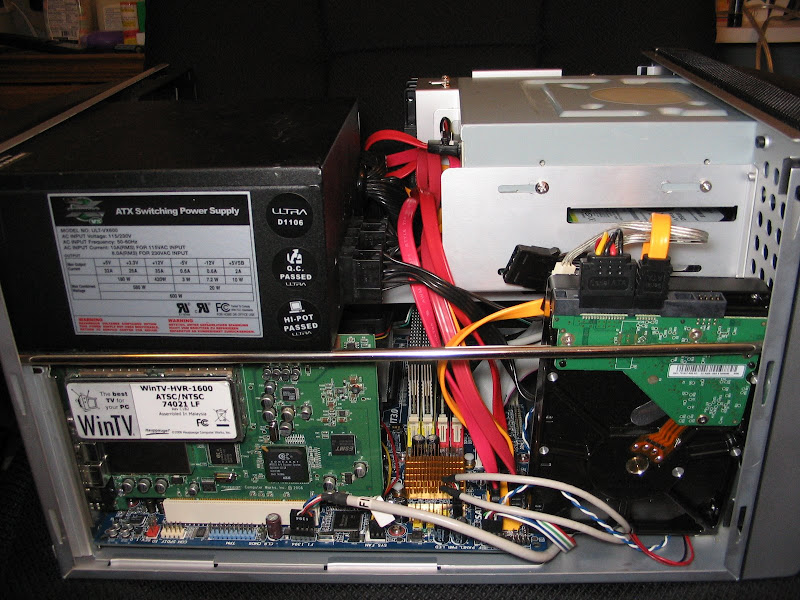 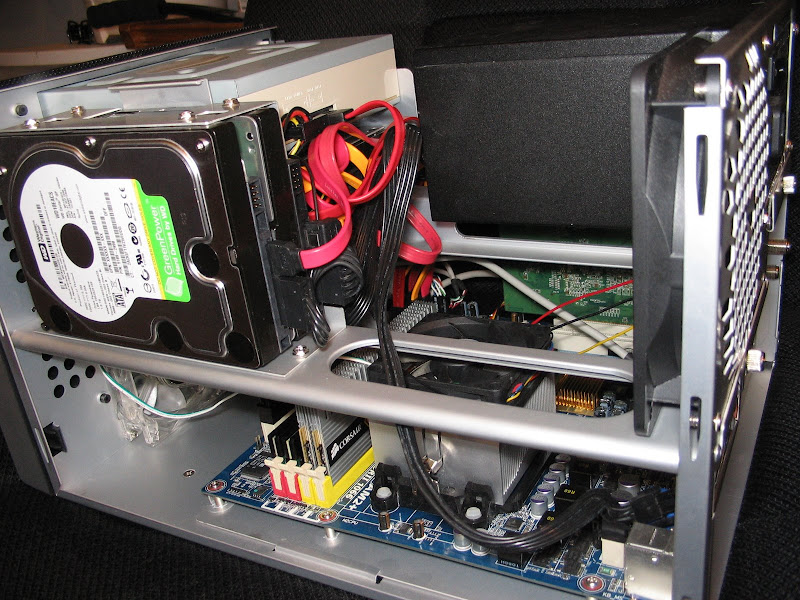 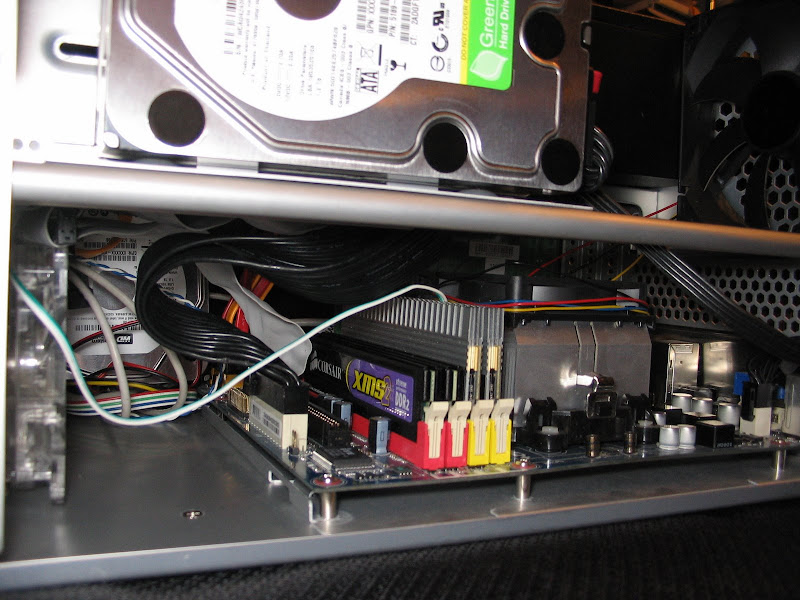 I have a hard drive in the lower 3.5" external bay. It's impossible to see, but in the lower 5.25" bay, I have a 3.5" hard drive instead. It's not mounted in any adapter, it's just screwed in on one side only. I has five hard drives and an optical drive, which is pretty impressive for the size, but I'm unhappy with the placement of the last hard drive.

I have no idea what to do with the fifth hard drive that's not screwed in. Currently it's just hanging out in front of the PSU. It's kind of resting on the motherboard a lttle, kind of on the side of the case. I don't like it where it is, but for now it's the only place to put it.

I am thinking about ditching the optical drive, but I like having it for now. It's a nice convenience to have an optical drive in an HTPC.

The system bus speed is bumped up from 200 to 230. I'm not sure exactly what that bumps the CPU clock speed. 2415MHz maybe? I guess that means the RAM is running at 925MHz. I'm not exactly sure how to read this information in Ubuntu...it's not as simple as running CPU-Z.

The RAM is a mix and match from two older systems. It has worked fine so far, and after 18 hours of extended memory testing.

Do what I did and get an internal hotswap 3 bay SATA hard drive enclosure and run your DVD burner in an external enclosure. I use my DVD burner maybe twice a year.
P

MassiveOverkill said:
Do what I did and get an internal hotswap 3 bay SATA hard drive enclosure and run your DVD burner in an external enclosure. I use my DVD burner maybe twice a year.
Click to expand...

That idea is really appealing to me now, I'm sort of procrastinating on the chance that I might find another solution.

If I did get the 3x hotswap bay, I would probably want the 3.5" external bay to be hot-swappable also, just for completeness sake so that all 4x drives in my RAID would be swappable.
J

Interesting as I would wonder how much heat the hdds add. The last time I tried to cram that many drives into a mATX build it was a mini tower. Sadly that one is retiring and I'm looking at moving the server duties to m current MX6 build.

Have been thinking the external idea might be the way to go so will be keeping tabs on your project!
P

The hard drives don't get very hot, but then again they are 5400 RPM only. An 80mm fan in front and a 120 mm fan in the back. Also, looking at the front of the case, I removed the clear plastic from the left side panel. This improved temps a bit.

The CPU and hard drives all stay under 40C unless there is a significant load on the CPU for a long time, then the hard drives start to creep up to 40 and the CPU may hit 45-47.

I have since added another hard drive. I removed the top of the case and it's just sitting on top of the CD drive.

Today I broke down and bought another case for my server. It was definitely overflowing before, and with the addition of another hard drive, I needed to upgrade.

That gives me 7 slots for hard drives, and three more 5.25" bays. Also, if/when I upgrade the motherboard, I'm no longer restricted to mATX. That's plenty of room to grow into.
You must log in or register to reply here.
Share:
Reddit Pinterest Tumblr WhatsApp Email Share Link
Top