Optimal network architecture (to replace equipment that has no stability)?

Hello,
I'm at my wits' end and need some helpful advise from an experienced networking pro.
I have Spectrum 200 mbps service and there are no other viable alternatives here at the house at which we've lived for 8 years. Nothing but constant problems. I've traded out modems 4 times, tried countless routers, had Spectrum field tech visit at least 8-10 times.
Until 5 days ago, my equipment was: Netgear CM600 >> TP-Link Safestream TL-R600VPN (not using a vpn; not a wifi router) >> hardwired to Orbi RBR50 Mesh (main and satellite) used as WAP only. I have the TV hardwired into the TP-Link, and run ethernet from another TP-link port to the Orbi Mesh, and run one ethernet cable from Orbi into the main PC. See image below. While I have ethernet wired through the attic (runs between router and main Orbi), in order to eliminate the ethernet cable as the culprit, today I replaced the attic run with a brand new CAT7 cable that runs across the floor. Still no wifi, although the main pc has internet through its hardwire connection to the Orbi.

Wifi devices on our LAN: 4 ipads, 5 mobile phones, a gaming pc, 2 laptops, a sonos soundbar and a network audio receiver. I have 3 devices hardwired into the main Orbi appliance (main PC, VOIP phone, and Sonos Connect appliance (to enable playbar to work).

I experienced 235 mbps rock-solid performance for 6 months, the longest continuous "good" stretch since we've been here. Then speeds dropped to 40 mbps across the board for past 3 days. After speaking with Spectrum, I picked up one of their modems (only) and replaced the CM600. Now constant wifi dropouts. The pc hardwired to the TP-link router is fairly stable at much slower speeds (but with intermittent drops). Prior to this hardware config (modem>>hardwire router>>WAP) I used various routers with integrated wifi all of which produced horrible performance (constant intermittent dropouts).

The numerous spectrum field techs have proposed different solutions; some want to insert splitters, others remove them, some want to insert signal attenuators on the modem, others take them out. And, unfortunately, I don't know what I'm doing either. I simply want stable, 100+ mbps speeds. I'm thinking of replacing the router and Orbi with Cisco or Ubiquiti gear (router and WAPs) however how I do rule out this is a Spectrum problem? The wifi is basically non-existent at this point. I would say it could be the Orbi but the TP-Link router is also dropping out intermittently (although less so). Ideas on a more permanent fix, or how I birddog this? 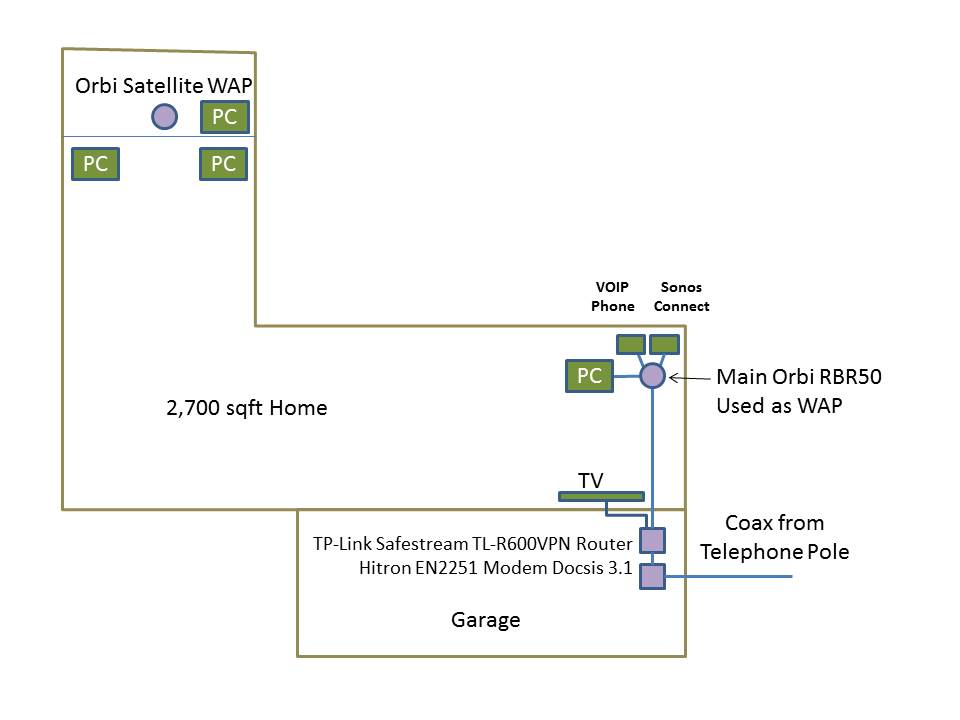 Does the problem occur if you pull everything off of the cable modem, and directly wire a PC into it? Have you tried pulling status reports from the cable modem, both when it's seemingly acting normal and when not? Are there any particular patterns to the issue (time of day, weather, usage, etc.)? Any signs of physical damage or possible water ingress to the coax?
S

BlueLineSwinger said:
Does the problem occur if you pull everything off of the cable modem, and directly wire a PC into it? Have you tried pulling status reports from the cable modem, both when it's seemingly acting normal and when not? Are there any particular patterns to the issue (time of day, weather, usage, etc.)? Any signs of physical damage or possible water ingress to the coax?
Click to expand...

This is where I would start too. I've got a couple of accounts through spectrum and while they do have outages, they usually hold up better than the other isps. If you have problems straight at the modem, it's definitely the service.

Once you're hooked up direct, use packetlosstest.com and the dslreports.com and fast.com speedtests to see what you're getting (I've found these both to be more reliable than anything else).
R

Thank you both for your prompt reply. I am concerned about water ingress because we had a rainstorm and the coax from telephone pole terminates into a splitter inside a plastic box affixed to the side of the home before this coax run terminates inside the garage where the modem is located. I worked on this all day yesterday. After 6 hours, I could not get the Orbi to work in WAP mode with the new Spectrum supplied modem positioned after the TP-Link router, so I gave up on that hardware configuration. I removed the TP-link router and used the Orbi in router mode and plugged it directly into the Spectrum modem. Per BlueLineSwinger's and SamirD's suggestions, I used packetlosstest, Fast and NPerf to measure many different configuration scenarios in which I traded out various equipment and ethernet cable to try to isolate the problem. I found a free program called Star Trinity Continuous Speed Test that also measures packet loss and jitter. The output can be exported as a csv file on which I ran some stats (see below). Because there are over 3,500 rows of measurement, I've only included a few dozen to give you a sense for the output from this diagnostic tool. But the other summary metrics are based on all 3,565 rows of measurements. This tool strikes me as much more helpful than others (FAST, NPERF, Speedtest.net) that only take a single or short series of measurements. What do you make of these results? 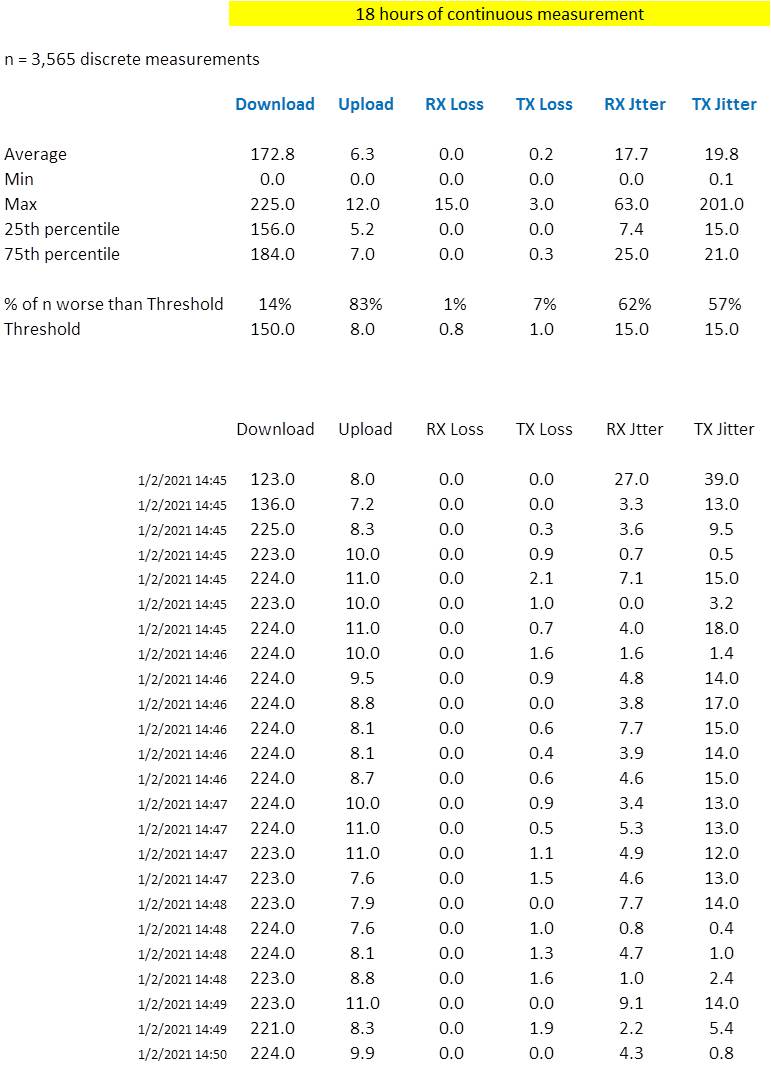 I have no idea what that test is running across. If it's operating as a typical internet speed test, it's mostly useless for diagnosing what may be an issue with your cable modem and/or ISP connection.

Have you pulled status reports from the cable modem as I suggested above? It varies by make/model, but often you can get into the cable modem by accessing 192.168.100.1 in a browser. For example, this is what mine looks like:

Judging by just the TX Loss column, there's a problem with your service. It's not much loss, but it is probably getting worse at certain times leading to the problems with RX and others.

If you want continuous monitoring like this, check out the thinkbroadband free monitors. I use them to keep tabs on all of my isp accounts continuously, and the graphs are really easy to read to spot problems:

Or explains the sluggishness and long ping times this day:

BlueLineSwinger, I had meant to note above that, as strange as it sounds, the Spectrum supplied modems do not allow access to event logs (via login to IP address). This is pretty frustrating and renders one even more reliant on Spectrum's customer service and response times. I should have been more descriptive, but the column headers in the stats I published above are Download Mbps, Upload Mbps, RX Loss %, TX Loss %, and I presume the jitter is measured in ms.
SamirD, thanks for your feedback. I think it was water ingress as they did not cap one of the coax female connectors not in use and we had a big rainstorm.
While my speeds are much slower, at least the service is up. Spectrum can't get out here until Jan 13 so hopefully the service will remain up until then.
Thanks for your help.
S

Ah yes, water can do that. I've also had issues when the temp changes and there are line issues further up the circuit. Spectrum is usually good at fixing stuff once they're on top of it, so hopefully you're on the road to a solution. I would still keep monitors and logs though--just in case, and also to validate that the problem is truly fixed.
You must log in or register to reply here.
Share:
Reddit Pinterest Tumblr WhatsApp Email Share Link
Top