I'm building on an ASUS Crosshair VII AMD board which has two M.2 slots with a direct connection to the CPU. This allows for insane bandwidth when pairing two NVMe drives in RAID 0. Would it generally be better to install 2x 250GB Samsung 970 Evo drives in RAID 0, or 1x 512 GB 970 Pro standalone? Price is about the same.
S

I don't know anything about AMD and the direct connection to the CPU, PCI lanes etc. I mean I know what it is but I do not know for sure if there is any real benefit. I would research it and if it does in fact give you true raid-0 speeds, then do that. It's easier to sell one of those in the future than just one is always my logic.

And not to lure you away from Samsung as they are a great brand. But If I could have gotten another manufacturer / brand for cheap but keeping close to the same performance I would have def gone with 1TB over 500GB for nearly the same price.

Either way, good choice on the Samsung. I love them. 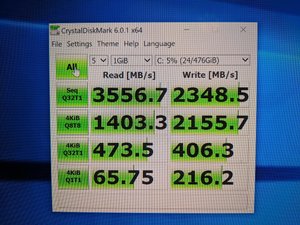 Here's the video showing 8GB read speeds (very close to double what you have in your screen grab) with the RAID 0.
A

I would go with single drive, less risk and speed as it is, its insane for the average user, unless you do benefit from higher sequentials, imo its not worth the risk of using raid0.
L

there is near zero point in RAIDing SSDs, Especially NVME SSDs (unless you actually need the higher read/write speeds) day to day there are no benefits but the risk of total loss of data if one drive brakes

been saying this for Years, buy the SSD size you need never RAID them (last time i did RAID 0 on 2-3 HDDs was when i was playing battlefield 2 so we as a squad could get into the map 5 seconds before the game start timer had finished, we could get to the other side of the map before other players could load the map and get in)

not sure why AMD has not made a RAID driver yet that only needs to load one driver doesn't make sense you have to use 3 drivers to enable RAID controller seems way over complicated way to do it (and as that video shows you should not even be able to see the NVME ssds until you loaded the raid driver)
Last edited: Oct 16, 2018
R

Data loss arguments are moot because the volume should be backed up no matter the number of disks it's made up of.

For the average user, yes there's no benefit in this case. For content creators or tasks that involve working with large files or hundreds of thousands of small files the benefit definitely scales. But usually one knows if they need more disk performance before hand.
A

rive22 said:
Data loss arguments are moot because the volume should be backed up no matter the number of disks it's made up of.
Click to expand...

I disagree, doubling the risk of losing the array its not worth it, even if you backup and you can re do the array, its downtime no matter how you see it.


rive22 said:
For the average user, yes there's no benefit in this case. For content creators or tasks that involve working with large files or hundreds of thousands of small files the benefit definitely scales. But usually one knows if they need more disk performance before hand.
Click to expand...

If this is the case they should be looking into higher endurance ssds, like Intel 900/905.

What other parts are you going to be running? Only reason I ask is this: All of the M.2 slots are likely going to be pulling PCIE bandwidth and if you run x2 M.2 (2x4) then add a video card (16) want to run SLI or XFire (2x8), you'll be choking all the PCIE lanes ... since the Ryzen only has 24 (20 free PCIE IIRC). Just a random thought.

As for the RAID, if you want to run it, run it. Whether the speed bump is worth it or not ... only you can decide.

PCs have a lot of bottlenecks... but you'll never feel one from using only a single NVMe SSD in daily use
E

Unless you actually need the raid 0 (is it really RAID if it's just striping, it should be called AID 0 because there's nothing redundant about it) I'd just do the single drive.