For those of you interested, you can watch the Oculus VR E3 livestream here. The show will be rebroadcasted at the conclusion of the event.
D

Wow.. that was a waste of my time. I wanted to know how much $ and when I could preorder. Additionally I wanted to know more specs about the display (mostly fov). Instead I got a bunch of talk from video game designers and some hollering my Palmer.

I'm sure I will buy one regardless and possibly even a vive, but I would have liked to have seen more. Hopefully the new controller is available in q1 as well but given that there were no details on it, I suspect it will come a quarter or 2 after launch.

I think getting in bed with microsoft was the right call though. Steam has vive and other unannounced headsets, sony has their own headset. It was either get with MS or roll your own. Looks like they chose the safe bet for launch and rolled their own controller for after. I think the streaming of xbox games to a virtual theater is pretty cool as well. I doubt I'll go out and buy a xbone, but for those who have one, you can get same/similar experience I do with my ps4 on my projector and at a fraction of the cost.
S

Seriously, all I want to know is price and release date. Have they announced that yet?
D

Getting into bed first with Facebook and now Microsoft. And to think this company once held so much promise.

What a train wreck. The 6 demo of the girl playing a racing game like a retard and streaming it from an Xbone was particularly cringe worthy. Especially after they spent so much time talking about how traditional 2D gaming isnt immersive.
T

Yup. They did that.

I liked that he demo'd double middle finger... 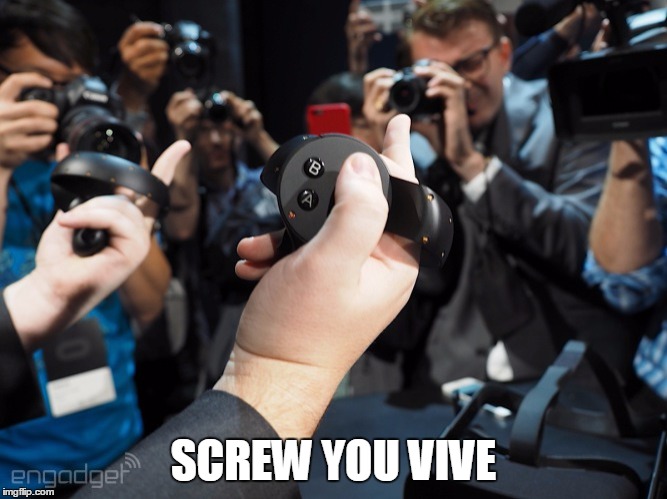 i jumped in for a bit. i like twitch but i also despise the typical twitch/xbox 16 yo culture. "omg girls play games" .

so is it integrating to xbox or windows 10 it was a little unclear.

Both:
1) Plug-and-play, directx12/wind10 friendly.
2) Xbone to stream through existing Virtual Theater app. Rift to include a wireless controller.

That may be all there is to the "partnership". Not a big deal.

Something about the new logo creeped me out. Then it hit me: Please, there's nothing better than touchpads. At least that's what the Internet has been telling me for the past week or so.
U

I was disappointed with the remote control unveil....I was really hoping for some sort of glove or "tracking rings" with the tracking dots on them. Lucky talked about the ability to pick up a gun, shoot, and drop it along with a controller with low mental load...seems like gloves would do all that pretty well. I understand the need for buttons, I just thought he was going somewhere else leading up to the unveiling of the controller.

Overall I'm pretty damn excited for the thing. While they didn't specify a hard release date, there were multiple statements, as well as a slide, that said 1st quarter 2016....so....we have 6-10 months if they are able to meet that goal. Also, while they didn't mention specs on the screens itself, they DID confirm that it's custom displays and a single display per eye which I would assume, as dangerous as it is, that we will be getting 1080p per eye...though one could hope its 2k per eye, it would be awfully hard to drive 4k with acceptable framerates and latency with their stated PC specs needed to run it.

On price, given that it's including a separate camera, built-in headphones, and dual high res, custom displays, I'm guessing they're gonna be priced in the $499-$699 region. A far cry from their long desired price point of $300 BUT....if it turns out to be capable of providing true presence...I'd pay $1000 for that.

I am a bit confused on the game selection to be honest. They plugged a space sim, Eve Valkyrie, which makes sense but, then they also teased a couple third person games, one of which looked like it was an on the rails puzzle game, akin to the older Tomb Raider games (haven't played the newest one). I was under the impression that unexpected movement in VR resulted in a high probability of motion sickness. Have there been changes to this in the last year or so? I have a DK2 and played it a bit but, the Screen Door Effect kept dragging my focus towards the pixels and out of the game. It was impossible for me to not focus on them, it was like trying to look through glass but your focus wouldn't stop reverting to the glass surface. So because of that, I wasn't able to spend much time inside the Rift and haven't kept up with development.

Anyways, I'm excited....really hope it delivers....of course...my life will go to absolute shit if it does, lol.

It looked like the leaked image they claim to be an old prototype.

Anyway, I think being able to use hand gesture control will be more important for VR experience than using a xbox controller, but I guess it's better to start with something people are familiar with.

I do hope in the future, we'll see more advance hand gesture control that doesn't require us to grip a mini controller. That looks very uncomfortable.
D

Hornet said:
Anyway, I think being able to use hand gesture control will be more important for VR experience than using a xbox controller, but I guess it's better to start with something people are familiar with.
Click to expand...

The trouble they face with launching half assed with a xbox controller instead of real motion input is input fragmentation - it forces developers into the position of having to attempt to deal with multiple input types, in a game they may have wanted to design around motion input exclusively. So the tendency in these situations is just to build for lowest common denominator.

Developers are already ranting on Reddit about the Rift launching standard with a controller, and that it means they'd have to completely redesign games they had planned to design around motion input. Seems like a lot of them are just going to move over to Vive since motion control will be standard there and its Lighthouse is already in its 3rd generation in the latest devkit.

Its not a big surprise that they're using 'the' standard gaming controller for PC as the default input method. It sort of sucks that you're forced to buy it if you already own a PS4 or 360 controller though.... but I suppose you could always just sell the receiver/controller if you have no use for it (or maybe they'll have a bare bones bundle that you can also buy). Likewise, this 'deal' is also pretty shitty for people using Linux or Mac... but at least they have the option of going with the Valve/HTC unit or another competitor.

I'm also really curious to see how well streaming Xbone games/content to the rift will work. IIRC, having very very low latency, along with high refresh rates, was essential to having a good experience (IE, not making people sick). If streaming the content adds substantial lag, I can see it possibly giving occulus a little bit of a black eye.

I'm also curious to see how well the Xbone will do, hardware wise, powering the rift. I believe that the current DK2 runs at 75Hz and I would assume that the final retail unit will run above that. So will the Xbone, which is already underpowered, be able to deliver stereoscopic images to the rift at 75+ fps at it's native resolution?

lol I wonder how much money MS gave Facebook/Occulus for this deal? Or will Facebook come pre-installed on every Windows 10 installation?
S

This product is going to be an historic failure. Too many chefs in the damn kitchen.

I'm excited. Wont pre-order, wait to see what the vive will bring to the table and then let the price war's begin.
D

dr.stevil said:
I'm also curious to see how well the Xbone will do, hardware wise, powering the rift. I believe that the current DK2 runs at 75Hz and I would assume that the final retail unit will run above that. So will the Xbone, which is already underpowered, be able to deliver stereoscopic images to the rift at 75+ fps at it's native resolution?

lol I wonder how much money MS gave Facebook/Occulus for this deal? Or will Facebook come pre-installed on every Windows 10 installation?
Click to expand...

There's been no announcement of the Rift plugging into an Xbone. Only about streaming from Xbone to Windows 10, and in turn to the Rift which acts in place of a monitor. A nice value add for some tiny subset of people that could afford a PC, Rift *and* an Xbone, but not exactly a driver for VR adoption since its just acting as a glorified 2D head mounted cinema in that configuration - and personal cinema facemasks have been around for years with no one really caring.

Its unclear what Microsoft's in this is beyond just trying to hop the VR bandwagon especially in light of half of Sony's E3 floorspace apparently dedicated to VR, but the speculation is Microsoft will announce Rift as their VR solution for Xbone on Monday. Otherwise I'm not sure why a smirking Phil Spencer would get out of bed and fly to OculusVR's news conference then throw around the word "partnership" simply because the Rift would have an Xbone controller inside the box.

Yes, this is real.
M

the assetto video below looks sweet though

maademperor said:
the assetto video below looks sweet though
Click to expand...